ST. LOUIS • The Missouri Civil War Museum in Jefferson Barracks is claiming ownership of the controversial Confederate statue in Forest Park, but city officials maintain they have control over both the structure and its removal.

Citing a 1912 city ordinance giving the United Daughters of the Confederacy the green light to erect and maintain the monument in the city’s largest public park, museum executive director Mark Trout said the organization signed over the rights to the museum on Tuesday.

“It’s the same deed of gift form that we require for any artifact,” Trout said.

St. Louis officials have discussed taking down the memorial since 2015, but it’s proved to be a political and logistical challenge. It’s also sparked a debate similar to those surrounding other Confederate monuments throughout the country, with some residents fighting to protect them as pieces of American history and others contending they are painful reminders of white supremacy.

• What you need to know about the Confederate Monument

The museum has tried to take control of the St. Louis monument before, when a committee formed by former Mayor Francis Slay began exploring the possibility of moving it. In letters to committee members in 2015, Trout expressed the museum’s interest and asked the city to “relinquish its current responsibility and liability of preserving the Confederate Monument at Forest Park by transferring the full ownership of the monument to our institution.”

But a potential deal fell through when the city wanted a say in how the monument would be displayed in the future. St. Louis Mayor Lyda Krewson shares that position, said her spokesman, Koran Addo.

“If you’re taking it down because you consider it offensive ... you don’t want it to go to a place where it would be celebrated,” Addo said on Wednesday.

Trout said he has no hostility toward the city, but the museum wouldn’t allow St. Louis leaders to have influence over how the memorial would be featured down the line.

“There is not a museum in this world that doesn’t have some sort of controversial, divisive item or artifact in their collections. That’s part of preserving history,” he said. “The moment we have governments telling museums how and why they can do things, we’re in trouble.”

The museum would consider legal action if the city doesn’t forfeit the monument, Trout said.

The city argues it has the right to say what’s in its public parks.

“It’s our position that the city is in control of the monument,” Addo said.

At an unrelated news event Monday, Krewson said taking down the 38-foot structure — a process that requires carefully moving and transporting 14 different pieces — would help the community move forward.

“If there’s a good thing to come out of this, it’s that we’ve had a lot of discussion about this that we may not have had,” Krewson said.

Meanwhile, city aldermen are considering a bill that would require any Confederate monuments in city parks to be removed within 120 days of the bill becoming law while prohibiting any other Confederate memorials in St. Louis public parks in the future.

The measure also would mandate the renaming of Confederate Drive in Forest Park to Scott Joplin Drive, in honor of the famed ragtime music composer, and require the use of private dollars to remove existing Confederate memorials.

In addition to grappling with a tight budget, leaders and activists have argued that the black community shouldn’t have to foot the bill to remove what they feel is a monument to slavery.

Fundraising efforts have been launched by St. Louis Treasurer Tishaura Jones, whose GoFundMe campaign has generated more than $17,000, and the Missouri Civil War Museum, which began accepting contributions on its website on Friday.

Addo said Wednesday the removal process would be funded almost entirely with private donations. The removal process could begin this week, he said, but the monument would likely not come down until next week at the earliest. 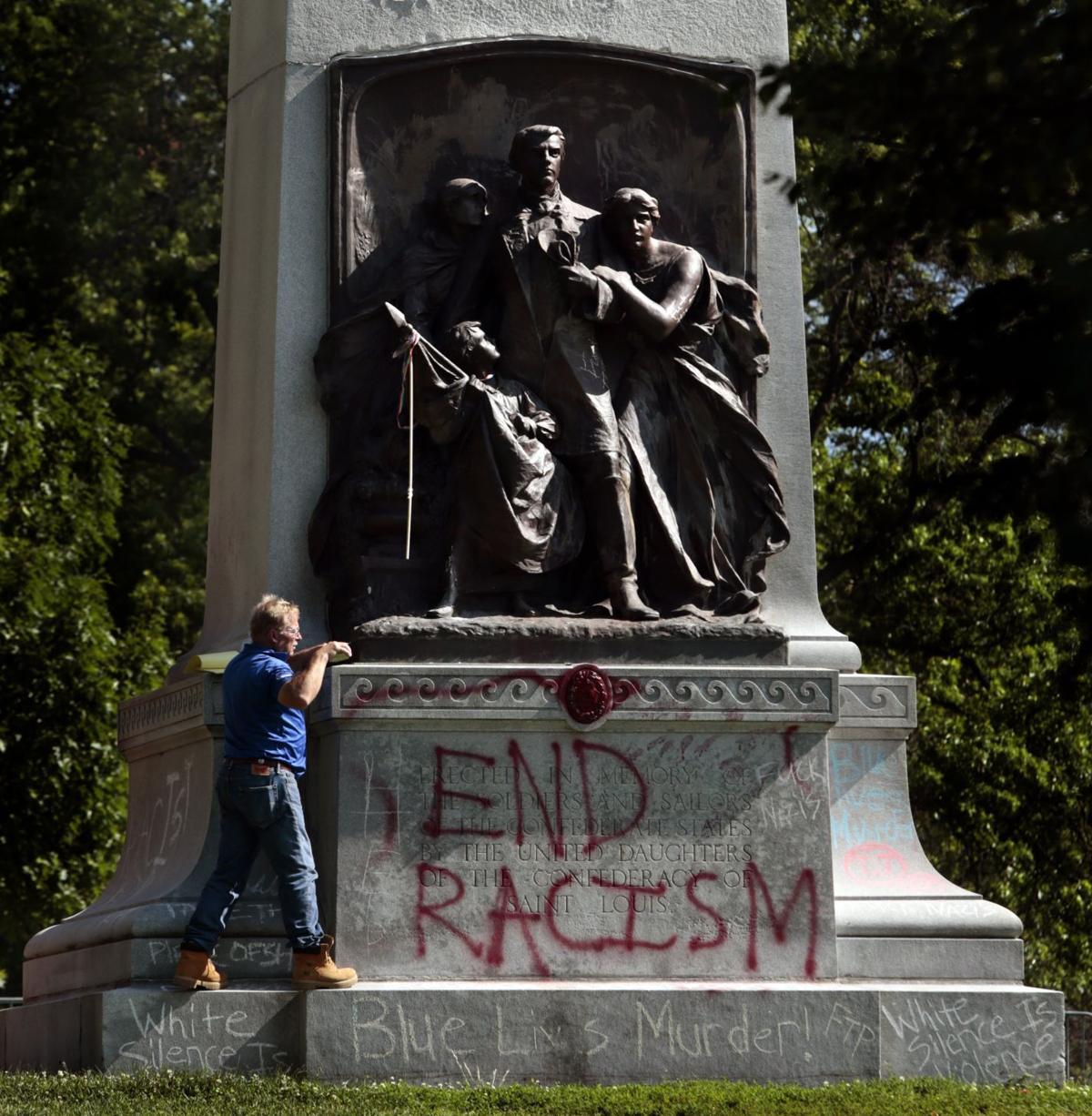 An unidentified man takes measurements on the Confederate monument in Forest Park on Tuesday, June 13, 2017. The marker has been the target of graffiti and controversy, and a legal battle over the city's attempts to remove it from the park. Photo by Robert Cohen, rcohen@post-dispatch.com 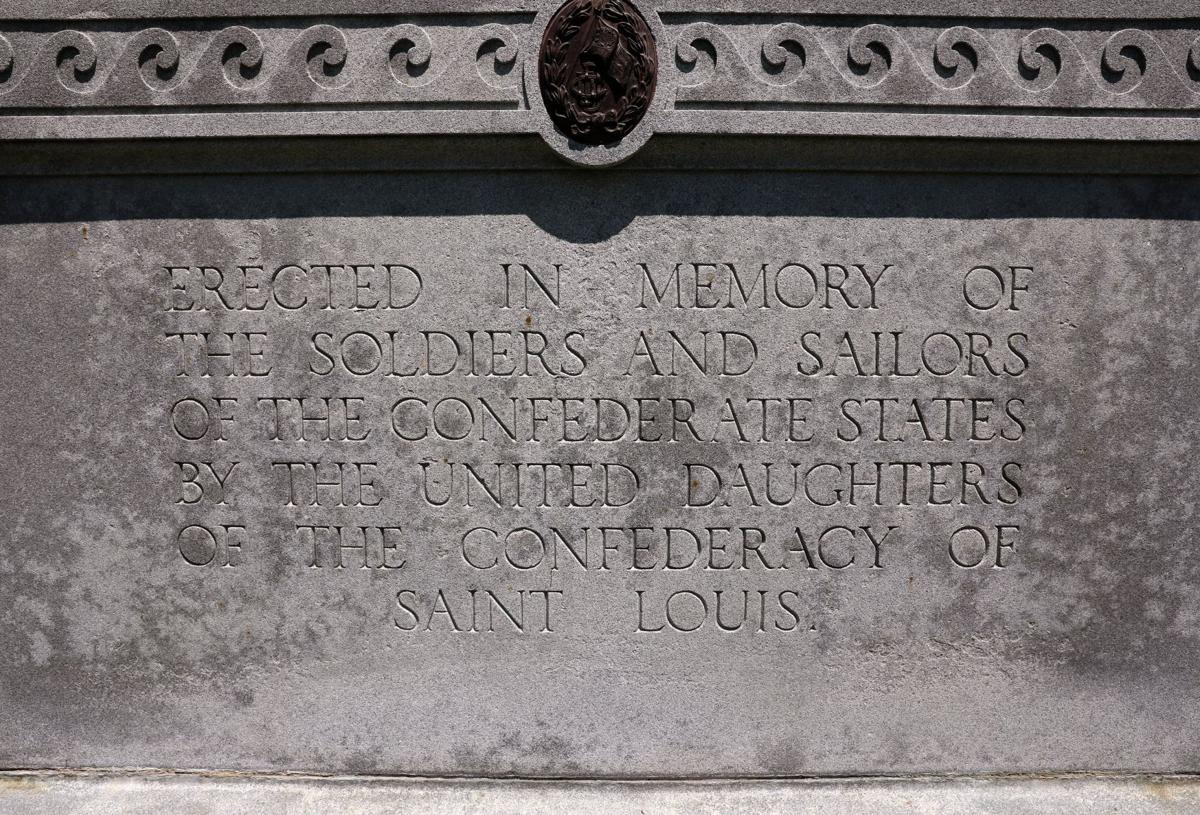 The Confederate Memorial in Forest Park bears wording describing its meaning, as seen on Tuesday, May 16, 2017. Photo by Christian Gooden, cgooden@post-dispatch.com