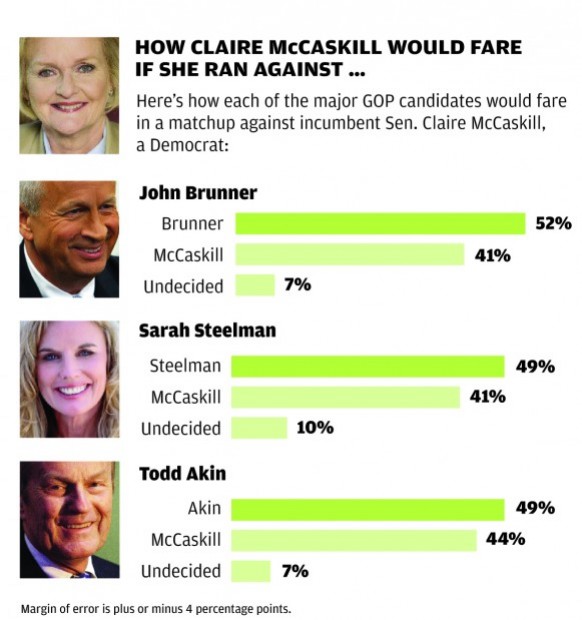 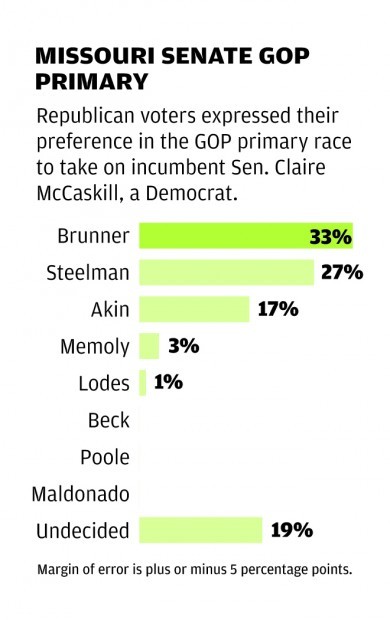 No matter who wins the Missouri Republican nomination to the U.S. Senate on Aug. 7, Democrat Claire McCaskill is running from behind.

McCaskill, the first-term incumbent Democratic senator, trails all three of her likely Republican challengers, according to a new Post-Dispatch/News 4 poll. She would lose to GOP frontrunner John Brunner by 11 percentage points if they were matched up today, the poll found. She would fall to Sarah Steelman or Todd Akin as well, though by smaller margins.

Further, her "unfavorable" rating is higher than her "favorable," and some of her worst numbers are among all-important independent voters.

The poll of 625 registered Missouri voters suggests a key source of McCaskill's problems is her support of President Barack Obama. The Democratic president — who almost won Missouri in 2008, and once considered the state a 2012 tossup — now has a 51 percent negative rating here and a 9-point deficit against Republican challenger Mitt Romney, according to the poll.

"A lot of people are going to hold her accountable for her close ties to the president," said pollster J. Brad Coker of Mason-Dixon Polling & Research Inc. of Washington, which conducted the poll.

On issues unpopular with Missourians, such as the Affordable Care Act and stimulus spending, 'she's sort of joined at the hip with him," said Coker.

That, paired with a Missouri electorate that is moving rightward, makes her path to re-election a narrow one, he said. "She's swimming upstream, and the current's getting stronger."

For the GOP Senate primary, the poll shows Brunner, a St. Louis-area businessman, leading former Missouri state Treasurer Steelman, 33-27 percent. Akin, a congressman, was trailing with 17 percent in that race.

Brunner, former CEO of Vi-Jon personal care products, has positioned himself as a successful entrepreneur running against two career politicians. He has never held a political office — a fact that his supporters tend to view as an asset rather than a liability.

"He's a businessman, not a politician," said Libertarian poll respondent Patty Stretz, 52, of Boonville. "Maybe he can come up with ways to create jobs."

Stretz defined her main problem with McCaskill in one word: "Obamacare" — the phrase detractors use to describe the Affordable Care Act.

McCaskill's support of the health care overhaul notwithstanding, she is viewed nationally as a moderate. The National Journal recently ranked her 50th of 100 senators on the liberal-to-conservative scale. She has taken pains to tout that centrism in her campaign.

But the poll numbers indicate she is nonetheless being rocked by Missouri's transformation from a swing state to one that tilts conservative. It shows McCaskill is "upside-down" in her favorable-unfavorable rating, at 37-44, which is better than Obama (34-51) but definitely not where an incumbent wants to be just three months out from the election.

"Any time I look at incumbents, I'm looking at how close they are to 50 percent (favorable). That's a big red flashing danger light" to be under 50, said Coker, the pollster. "That's the core of her problem: More people are unfavorable toward her than favorable, and less than half say they're going to vote to re-elect her."

Both presidential candidates have acknowledged Missouri's shift to "red" in their lack of campaigning here, indicating they both believe Romney has Missouri sewn up.

"Romney has a lot of executive-level experience. That's what we need," said poll respondent David Owen, 56, of St. Louis, reflecting a common theme among the GOP candidate's supporters. "I don't like the way Obama wants to spend money."

Coker predicted that McCaskill's fortunes at this point turn in large part on luck.

"They're going to need a little more than message politics. They're going to have to hope for an incident" that hurts the other side, he said. Missouri, he added, "is still winnable for the right centrist Democrat. ... She had those credentials, but with the sharply partisan issues, she has stood with the president on every big one."

The poll indicates that Brunner would be McCaskill's greatest threat, beating her 52-41 percent in a hypothetical matchup. Steelman is only slightly less dangerous, beating her 49-41 percent. Even Akin, badly trailing the other two Republicans in the upcoming primary, would edge McCaskill 49-44 percent if the general election were held today, the poll found.

Perhaps McCaskill's most daunting problem, though, lies with independent voters, a group she once claimed.

When only voters calling themselves independents are polled, McCaskill loses the hypothetical matchup to Brunner 57-36 percent — a devastating 21-point spread. McCaskill's losses to Steelman and Akin among those independent voters come in at 16 and 11 percent, respectively.

With only about a third of the electorate calling itself Democratic, and most Republicans unlikely to cross over, a McCaskill victory would be especially tricky without more of that independent vote. She used to have it. When she defeated Jim Talent to win her seat in 2006, exit polls showed she won 51 percent of voters identifying themselves as independent, which made up 25 percent of the electorate at the time.

The first-term senator has been the target of millions of dollars of attack ads financed by outside sources, especially from Republican and conservative groups who see McCaskill as one of Senate's shakiest incumbents. In late May, the McCaskill campaign estimated the outside money spent against her at about $5 million, from attackers including the U.S. Chamber of Commerce. And that was before Crossroads GPS, the Karl Rove-affiliated 'super-PAC," dropped about $1.5 million in June to hit her on her support of Obama in the healthcare and stimulus spending fights.

McCaskill captured more than 60 percent of self-identified moderates in 2006, suggesting that success in her re-election drive could well depend on her ability to persuade middle-of-the-road voters that the GOP nominee is too conservative even for an increasingly conservative state such as Missouri. It may be telling that McCaskill does best in a head-to-head matchup against Akin, who is consistently ranked among the most conservative members of Congress.

"She has stood by Obama. This country is big enough and hopefully nice enough to have health care for everyone," said Maureen Murphey, 65, of O'Fallon, a Democrat and a McCaskill supporter who participated in the poll. She added that the "negative campaigning" among the Republican candidates toward McCaskill and each other "has certainly opened my eyes" about the GOP field.

The poll dramatizes why Missouri is not among battleground states this fall for the first presidential election in memory. Nationally, Obama's approval rating has improved for three straight quarters — to 46.8 percent — Gallup reported last week, which is one reason why the president holds a slight lead over Romney nationally. But the president's anemic 34 percent favorability rating in the Missouri poll underscores his difficulty in waging a competitive race in Missouri.

"Missouri is not in play" in the presidential race, said Coker. While Obama came "very, very close" in 2008, "I think he realizes he's gone nowhere but down since then."

"They're going to write off Missouri," Coker said. "Outside of the two metro areas, they're voting against him two-to-one."

Bill Lambrecht of the Post-Dispatch contributed to this report.

Missouri moves from a swing state to a red state

That transformation is reflected in a Post-Dispatch/KMOV poll that spell trouble for Claire McCaskill and Barack Obama, while Jay Nixon is hanging on.

Missouri moves from a swing state to a red state

That transformation is reflected in a Post-Dispatch/KMOV poll that spell trouble for Claire McCaskill and Barack Obama, while Jay Nixon is han…

Is Claire McCaskill helping Todd Akin in the GOP primary?

To conservatives, McCaskill's "criticisms" of U.S. Rep. Todd Akin in a commercial sound more like compliments.

Kinder, seeking a rare third term, was favored by 47 percent of those surveyed compared to Lager’s 21 percent

Jay Nixon's ahead, but he can't coast

He has a 9-point lead over his likely Republican challenger in the Nov. 6 election, St. Louis businessman Dave Spence

Nixon's ahead, but he can't coast