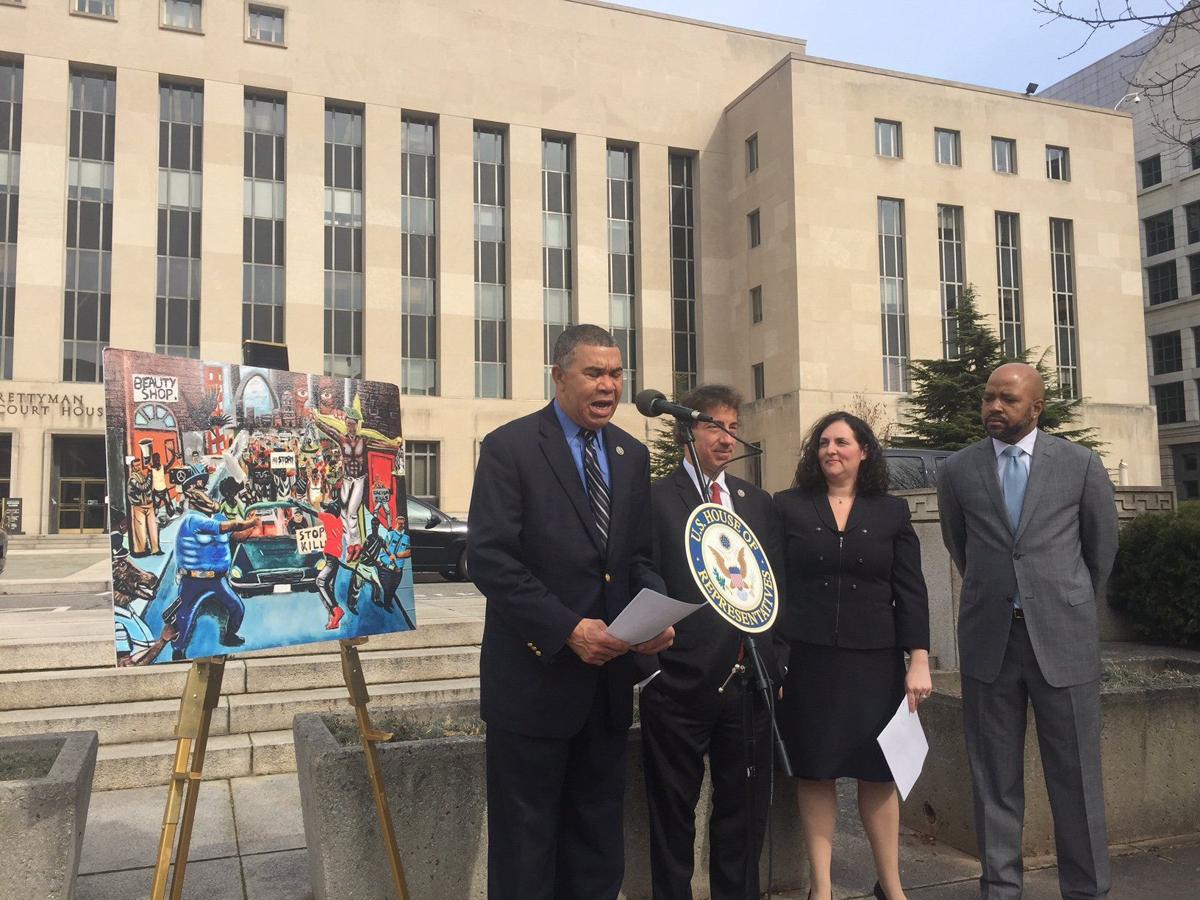 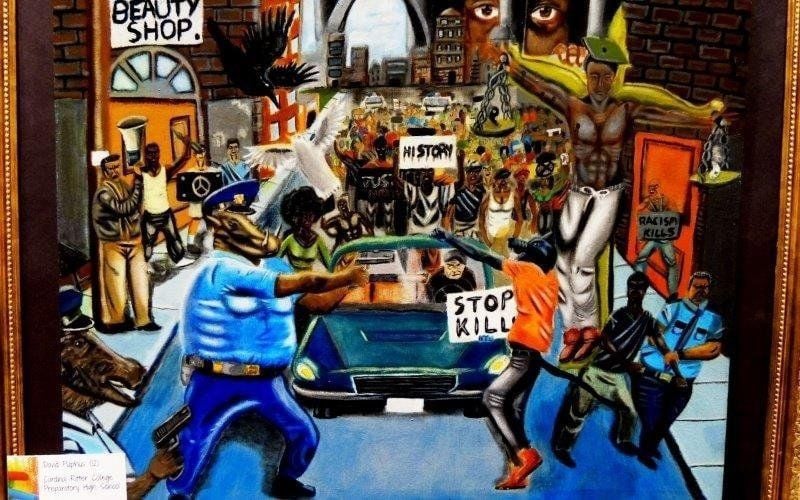 An acrylic painting by David Pulphus when he was a student at Cardinal Ritter College Prep high school in St. Louis is stirring up controversy after its display in the U.S. Capitol in Washington. The painting, "Untitled #1,'' in May had won an annual contest sponsored by U.S. Rep. William Lacy Clay, D-St. Louis. It is a symbolic representation of injustice, inequality and the unrest in Ferguson, and, among other things, depicts police officers as animals. Photo courtesy of Clay's office.

WASHINGTON • The St. Louis artist suing the architect of the U.S. Capitol for removing his painting could make a potentially strong argument that his rights were violated, attorneys said Tuesday.

Rep. Lacy Clay, D-St. Louis, announced Tuesday on the steps of a Washington federal courthouse that he wants a federal judge's order to rehang the painting, which depicts some police officers with animal heads along with other images inspired by the Ferguson protests. The plaintiffs are David Pulphus, who painted the artwork as a high school student, and Clay, whose office administered the art competition that brought the painting to Congress.

The architect of the capitol in January ordered the painting removed seven months after approving it, citing the congressional art competition's rule that pieces cannot depict contemporary political issues. It hung among several hundred other pieces in a Capitol Hill tunnel until conservative commentators began asserting its anti-police themes were inappropriate for Congress. Republican congressmen removed it several times and delivered it to Clay's office.

Legal observers say the case could hinge on whether the congressional art competition amounts to a public forum.

If it is a forum, courts have ruled government officials cannot censor viewpoints they disagree with, said Frank LoMonte, an attorney and executive director of the Student Press Law Center, a nonprofit that advocates for student expression.

"His best argument is going to be: You singled my expression out because of the anti-police message that it conveyed," LoMonte said. "And honestly, I don't think anybody's going to be able to dispute that."

The architect's initial approval of the artwork further bolsters Pulphus' argument, said David Korzenik, a media attorney and professor at New York's Benjamin N. Cardozo School of Law. After reviewing the complaint, Korzenik said the "unruly" manner of challenging the painting creates "real problems" for those who want the painting to come down.

"It was accepted, and it was displayed. And then retroactively they’re applying guidelines to reject it — which certainly indicates it’s an attack on the viewpoint and the content of the work,” he said.

Clay argued that the architect of the capitol acted "in response to the enormous political pressure he experienced from the Speaker of the House and certain right-wing media outlets."

The government will likely argue it has the right to decorate its space however it chooses, LoMonte said. "The courts are really going to parse what this art competition was, and exactly how it was displayed and explained to the public."

About thirty years ago, the government won a court case to remove a sculpture from a federal plaza in Manhattan, arguing that artwork owned by the government was not protected speech. But unlike that case, Korzenik said, the artist still owns his painting and the contest was managed by private entities, like art teachers.

Pulphus' artwork was slated to hang in the Capitol until the summer. A judge would likely still rule on the case even if it lasts beyond the time Pulphus' work was supposed to come down, although the remedy might be in question, LeMonte said.

"The courts have typically said that even just a day's delay in speaking when you had a right to speak is an irreparable injury," he said. "And because so much political speech in particular is worthless if it can't be heard in a timely manner, the courts have been pretty protective of people's right to speak even if the injury is totally completed."

An acrylic painting by David Pulphus when he was a student at Cardinal Ritter College Prep high school in St. Louis is stirring up controversy after its display in the U.S. Capitol in Washington. The painting, "Untitled #1,'' in May had won an annual contest sponsored by U.S. Rep. William Lacy Clay, D-St. Louis. It is a symbolic representation of injustice, inequality and the unrest in Ferguson, and, among other things, depicts police officers as animals. Photo courtesy of Clay's office.