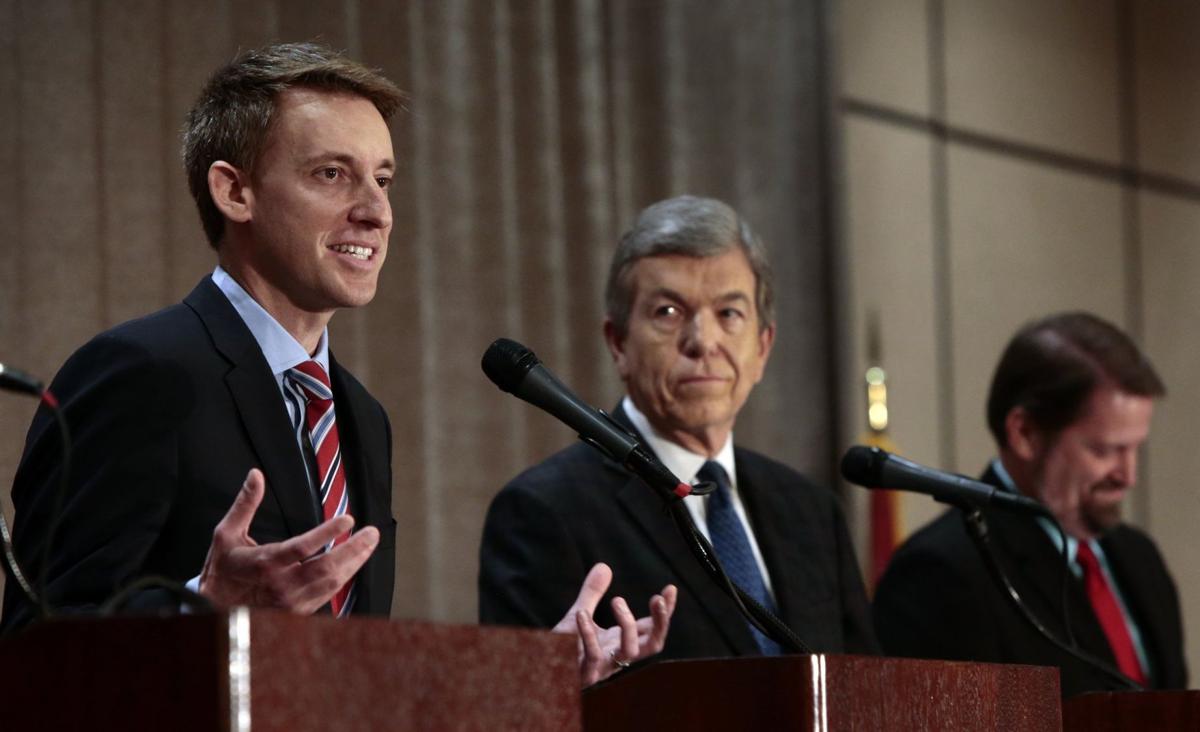 Jason Kander (left) speaks as U.S. Sen. Roy Blunt and Fred Ryman listen during a debate for Blunt's Senate seat during a meeting of the Missouri Press Association at the Chateau on the Lake Resort in Branson, Mo. on Friday, Sept. 30, 2016. Photo by Robert Cohen, rcohen@post-dispatch.com 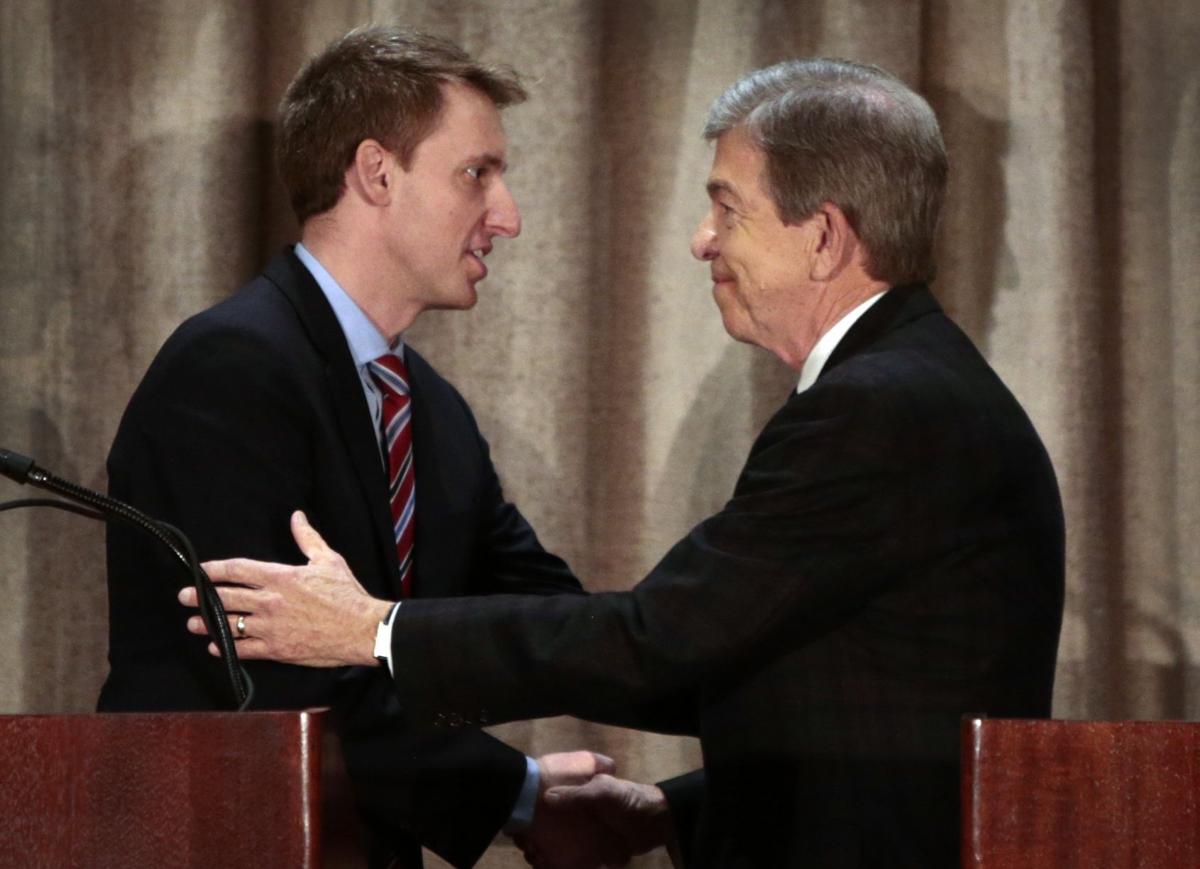 Jason Kander and U.S. Sen. Roy Blunt shake hands at the end of a debate for Blunt's Senate seat during a meeting of the Missouri Press Association convention at the Chateau on the Lake Resort in Branson, Mo. on Friday, Sept. 30, 2016. Photo by Robert Cohen, rcohen@post-dispatch.com

Missouri on Tuesday will be among a handful of pivotal states whose voters will determine control of the United States Senate and greatly influence the direction of the federal government beginning in January.

With Republicans’ 59-seat House majority projected to shrink, control of the Senate will help decide how much of the next president’s policies and plans become reality.

From Supreme Court justices to trade deals to the enduring differences on immigration, the Senate — with the filibuster threat hanging over the party controlling it — will be the make-or-break chamber for a host of important issues.

That’s why outside groups aligned with either incumbent Republican Sen. Roy Blunt or his Democratic challenger, Secretary of State Jason Kander, have poured at least $35 million into the race.

Their spending — ranging from the super PAC of Senate Republican Leader Mitch McConnell on the right, to a cluster of union and Democratic-related groups on the left — has surpassed the $26 million that the Blunt and Kander campaigns collectively had raised by mid-October.

A Post-Dispatch poll released Oct. 28 showed Blunt and Kander in a virtual tie.

The Senate is controlled 54-46 by Republicans, but more of the seats up for grabs Tuesday are held by the GOP.

Republican senators Kelly Ayotte in New Hampshire, Richard Burr in North Carolina and Pat Toomey in Pennsylvania are, like Blunt, in tight and fierce re-election fights. Republicans are trying to hold an open seat in Indiana; Democrats hope to retain the Nevada seat being vacated by retiring Senate Democratic Leader Harry Reid.

Missouri has not always been in this toss-up category or on the national radar. But in an anti-Washington year, Kander’s status as a relative newcomer with a thinner public record to defend than Blunt’s, together with Kander’s Army service in Afghanistan, made the 35-year-old a potent outsider opponent for the 66-year-old Blunt.

Kander’s early fundraising prowess got him noticed, and when once toss-up Senate races in Ohio and Wisconsin turned decisively for the Republican and Democrat, respectively, many national donors saw Missouri as the next logical place to put their money. Hence the record-breaking outside spending.

None has spent more than the $10 million-plus that McConnell’s Senate Leadership Fund, supported by big Republican donors, has poured in to try to save Blunt.

Collectively, Democrats have answered with more than $5 million from the Democratic Senatorial Campaign Committee, according to the latest tally by the campaign spending watchdog, the Center for Responsive Politics. The NRA has spent $3 million on Blunt’s behalf. Kander has been bucked up by $1.7 million from VoteVets, and $1.8 million from a group calling for the end to unlimited spending in campaigns.

The same kindling that has fired Trump’s turn-Washington-upside-down insurgency has been used by Kander to charge that Blunt is too tied to Washington lobbyists, including those in his own family, to put Missourians first.

Blunt says Kander will be a rubber stamp for Clinton if she is elected president, and that Kander’s political leanings are too far left for most Missourians. Speaking to Kander’s attacks on Blunt’s lobbyist family — his wife, a daughter and two sons are lobbyists — Blunt said in a fundraising appeal that Kander “has talked a lot more about my family than what he can do for families like yours.”

Blunt was Greene County clerk before being elected as secretary of state, where he served for eight years. He lost a Republican gubernatorial primary in 1992. He was elected to the U.S. House in 1996, and in 2010, he easily defeated Democrat Robin Carnahan for the U.S. Senate seat vacated by Christopher “Kit” Bond.

Blunt’s experience as a 20-year Washington insider has been marked by rapid rises to leadership positions in both the House and Senate. But while he can point to bipartisan legislative accomplishments that benefited Missouri, the insider status that helped lead to them has been subject of attacks by critics.

Missouri was overlooked, nationally, at first because of Blunt’s reputation as a very good retail campaigner. Some underestimated how the same anti-Washington impulses propelling Trump, especially in Republican-leaning presidential states like Missouri, could damage veteran GOP incumbents lower on the ballot. The establishment Republican Blunt ended up sharing the top of the ticket with two candidates — Trump and gubernatorial candidate Eric Greitens — who rail against a “rigged” political system.

“The expectation was that Blunt was sufficiently entrenched and financed that he could withstand anything a Democratic challenger could throw at him,” said Peverill Squire, the Hicks and Martha Griffiths Chair in American Political Institutions at the University of Missouri.

“What I don’t think outsiders fully anticipated is that Kander is a very good candidate or that Blunt as the ultimate insider would have run with GOP presidential and gubernatorial candidates who claim the system is corrupt and rigged to the advantage of insiders,” Squire said. “Given Blunt’s vulnerabilities on this score, I’m surprised the Kander campaign hasn’t raised the question of what Blunt would do if he lost. I doubt anyone thinks he would move back to Missouri.”

Blunt closed his campaign with the help of Sen. Ted Cruz, R-Texas, who narrowly lost to Trump in Missouri’s presidential primary last spring. In a joint appearance in Springfield, Mo., Cruz, Blunt, Greitens and other top-of-the-ticket Missouri Republicans appealed for a Republican sweep statewide.

Cruz echoed one of Blunt’s final arguments: that the Senate voters choose on Tuesday will be asked to confirm the replacement to the late Antonin Scalia on the Supreme Court.

The homestretch of Kander’s campaign included a bus tour throughout the state, where he is closing with an argument that he has made since announcing his candidacy in February 2015: that Washington won’t change unless voters change who they send there.

Described by friends and colleagues as a “man on the move,” Kander has tried to present himself as a fresh face, despite a résumé that includes holding statewide office and serving two terms in the Missouri Legislature, where in a group dominated by Republicans, he unsuccessfully pushed for campaign finance reform.

Kander then narrowly won a bid for secretary of state in 2012, becoming the youngest statewide elected official in the country.

The ad in which he assembled an AR-15 rifle while blindfolded attracted national attention, but it has been his relentless attacks on Blunt’s long tenure in Washington and on his connections to lobbyists and big donors that has attracted more attention in Missouri.

“After 20 years there, Sen. Blunt has changed,” Kander told the Post-Dispatch. “He no longer believes what he used to believe.”

Blunt responded that while a lot of people could assemble a gun, not everyone was a Clinton supporter like Kander.

If elected, Kander says his top priorities include a middle-class tax cut and continued efforts to make elections more ethical, including redistricting reform and overturning a Supreme Court decision that allows corporations and unions to spend unlimited amounts of money to support or criticize candidates for office.

Blunt has promised to continue efforts to peel away at the Affordable Care Act, President Barack Obama’s signature health care law. Blunt has been one of the Senate’s most vocal critic of the law.

Senate races in the following states, experts say, will determine whether Republicans retain or lose control of the Senate:

He said he gave the middle finger after racist provocations from Republican politicians and a boisterous audience pushed him to his limit.

The Page administration and County Council Chair Rita Days both say they are investigating.

A mayoral spokesman rejects the request, says administration needs to ‘consider all of our options.’

Jason Kander (left) speaks as U.S. Sen. Roy Blunt and Fred Ryman listen during a debate for Blunt's Senate seat during a meeting of the Missouri Press Association at the Chateau on the Lake Resort in Branson, Mo. on Friday, Sept. 30, 2016. Photo by Robert Cohen, rcohen@post-dispatch.com

Jason Kander and U.S. Sen. Roy Blunt shake hands at the end of a debate for Blunt's Senate seat during a meeting of the Missouri Press Association convention at the Chateau on the Lake Resort in Branson, Mo. on Friday, Sept. 30, 2016. Photo by Robert Cohen, rcohen@post-dispatch.com