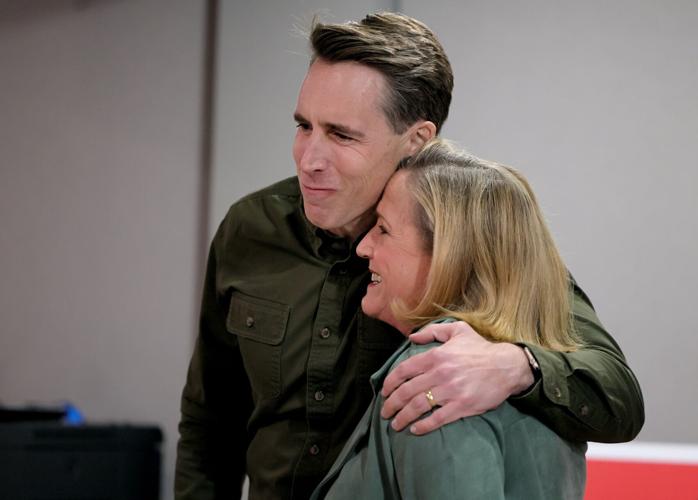 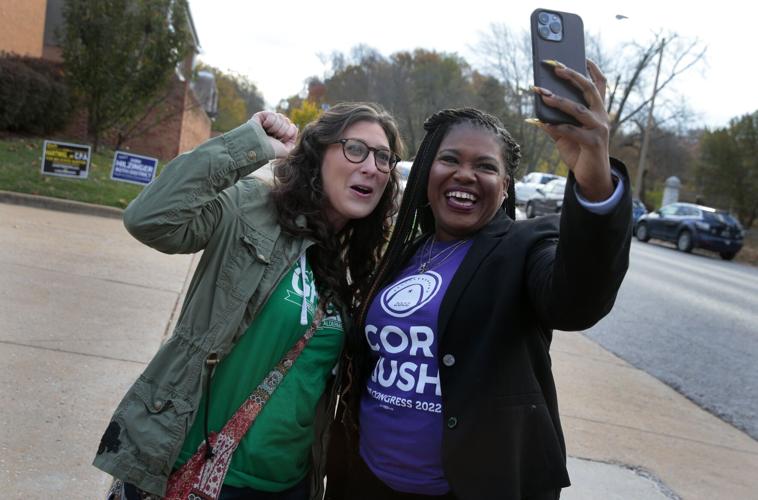 St. Louis Alderman Megan Green and U.S. Rep. Cori Bush record a video to get out the vote while greeting voters outside the precinct at the Missouri School for the Blind on Tuesday, Nov. 8, 2022. 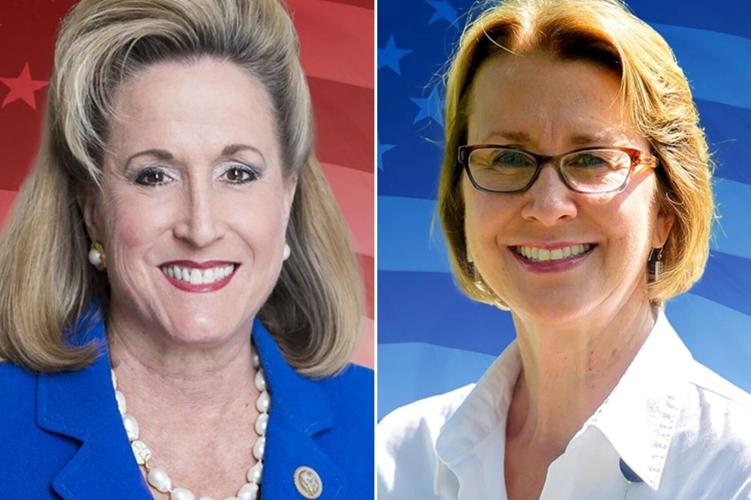 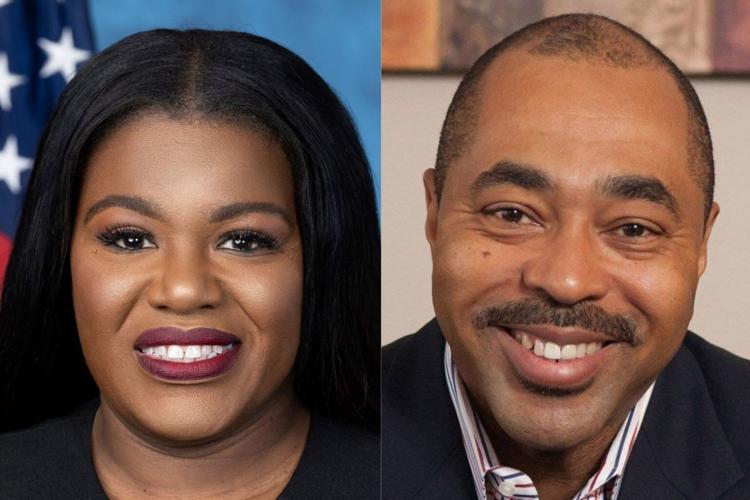 Wagner, a conservative Republican from Town and Country, had a 55%-to-43% edge over Democrat Trish Gunby, a state representative from west St. Louis County, in final returns from the 2nd Congressional District.

Bush, a St. Louis Democrat who lines up with the left wing of House members from her party, was backed by about 73% of 1st Congressional District voters in her race against Republican Andrew Jones. Finishing far behind in both contests were Libertarian candidates.

Wagner, in a victory statement, thanked voters and said “there is no better feeling than representing our conservative, Midwest values in Congress. Let’s get back to work.”

She said she would push back “on the Democrats’ radical agenda that has recklessly spent trillions of your taxpayer dollars.”

The 2nd, which had been considered a swing district in the last two election cycles, became more Republican-oriented under a reapportionment plan passed last May by the Missouri Legislature.

The 1st District kept its heavily Democratic flavor under the redistricting map. Bush had no trouble dispatching Jones, a St. Louis resident and utility executive who ran unsuccessfully for mayor last year and in 2017. The district takes in St. Louis and a large swath of north and central St. Louis County.

“St. Louis, it is the honor of my life to represent you in Congress,” Bush said in a celebratory tweet as it became clear she would win. “It will be my privilege to continue serving you as your Congresswoman. I love you.”

Wagner, 60, in her campaign echoed other Republicans in focusing on rising inflation under President Joe Biden’s administration, citing rising prices of groceries and gasoline in her TV commercials.

Her Democratic opponent, Gunby, 62, emphasized her support for legal abortion, hoping to appeal to voters worried about the U.S. Supreme Court ruling earlier this year that allows states to outlaw the practice.

Missouri is among the states that has done that, except in the case of a medical emergency. Wagner is a longtime ally of the state’s anti-abortion movement.

Gunby, in a telephone interview Tuesday night, said she had hoped that the cost of living, while on voters’ minds, wouldn’t outweigh subjects she talked about such as abortion, gun violence and climate change.

“My race was mainly focused on long-term issues” while it turned out the electorate was worried about the short term, she said.

Bush, 46, was first elected two years ago after upsetting longtime U.S. Rep. Lacy Clay in the 2020 Democratic primary. In August of this year, she easily turned back a challenge from another well-funded local Democrat, state Sen. Steve Roberts.

Bush’s campaign highlighted her votes to bring $1 billion in stimulus money to the region and more than $9 million in earmarks for organizations working on issues such as homelessness, gun violence and health care access.

She also touted her protest on the Capitol steps last year that helped spur the White House to extend a nationwide ban on evictions before it was overturned by the U.S. Supreme Court.

Jones, 61, complained that Bush was “a socialist ideologue” who divides people based upon income, race and background.

He expressed concern about the impact of inflation, crime and a chronically underperforming education system.

Two new Republican members of Congress were elected Tuesday in other parts of the state.

Hartzler and Long gave up their seats to run losing bids for their party’s U.S. Senate nomination in the August GOP primary.

Budzinski, of Springfield, had a 54% to 46% lead over Deering, of Decatur, in nearly complete returns. The string bean-shaped district, reapportioned by Springfield Democrats to favor their party, stretches from East St. Louis to Champaign-Urbana.

Budzinski, a former official in Biden and Gov. J.B. Pritzker’s administrations, pledged to find common ground with Republicans and bring civility back to Washington.

“I will work with anyone that will lift up the communities in central and southern Illinois regardless of their party or their ideology,” she told supporters in Springfield on Tuesday night.

Lee Enterprises and The Associated Press contributed to this report.

U.S. Rep. Cori Bush had campaigned as an uncompromising progressive as likely to make her case in the streets as at the negotiating table.

St. Louis Alderman Megan Green and U.S. Rep. Cori Bush record a video to get out the vote while greeting voters outside the precinct at the Missouri School for the Blind on Tuesday, Nov. 8, 2022.