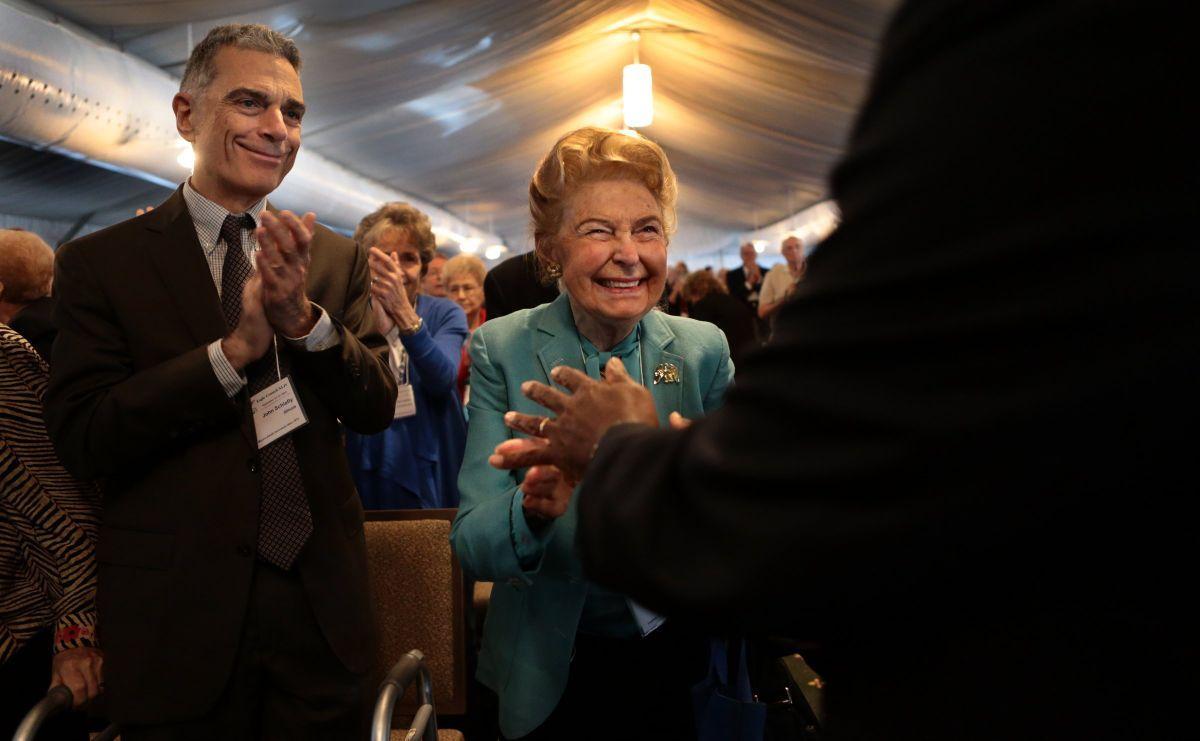 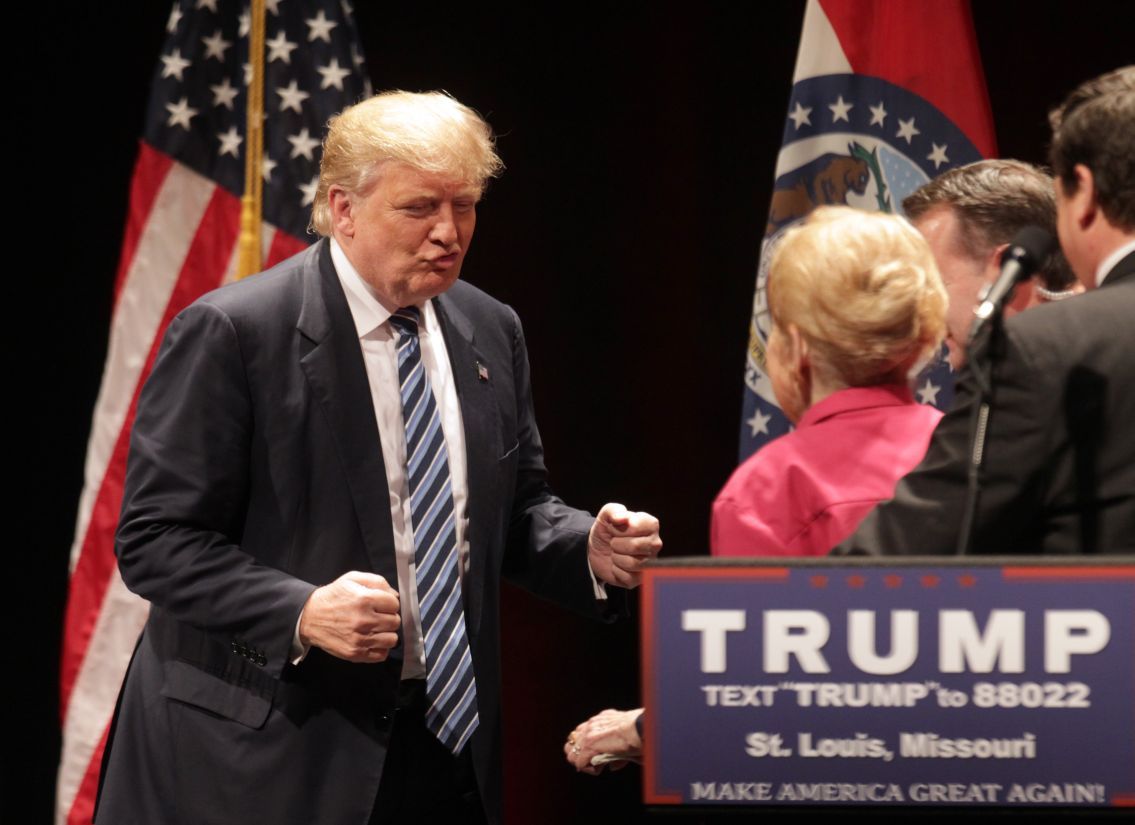 Donald Trump greets Phyllis Schlafly on stage at the start of Trump's campaign rally at the Peabody Opera House in St. Louis on Friday, March 11, 2016. Photo By David Carson, dcarson@post-dispatch.com

ST. LOUIS • In the latest tremor from the ideological earthquake wracking Republicans nationally, conservative icon Phyllis Schlafly says the board of the advocacy group she founded 44 years ago is trying to oust her for endorsing Donald Trump.

“It’s disloyal, and it’s terribly shocking, and I’m completely depressed about it,” she told the conservative website WND.com prior to an afternoon telephone meeting of the board of the Eagle Forum.

That meeting ended with the possible removal of the group’s president, Ed Martin, but left Schlafly in her post as chairman and CEO. One board member vehemently denied there is any movement to remove her. But Schlafly insisted otherwise in a statement and vowed to “fight for Eagle Forum.”

The board members on the other side of the divide include Schlafly’s daughter, Anne Cori. She, with at least three other board members, is on record endorsing Sen. Ted Cruz of Texas, who is battling Trump for the Republican presidential nomination.

“We’ve had some excitement,” quipped Cori, who strongly disputed the claim that the conflict is rooted in the presidential election. When pressed about what discussions she and Schlafly have had on the issue, she paused and said, “I love my mother deeply.”

Cori implied that some of the criticism of the board that has been attributed to her mother is actually coming from Martin.

Martin, president of Eagle Forum since January 2015 and a staunch supporter of its 91-year-old founder, wrote in a post on the group’s Facebook site over the weekend that “word has come of a rogue board meeting and an upcoming hostile takeover of Eagle Forum’s board and its assets. Phyllis Schlafly’s endorsement of Trump is a likely catalyst.”

Members of the board said in a statement that they ousted Martin in Monday’s meeting, specifying no reason. But Schlafly, in her own statement, alleged the meeting was “improper” and that its “conduct will not stand,” so it was unclear whether his removal is official. Neither Martin nor Schlafly could be reached for comment.

One of the board members, Eunie Smith of Alabama, said in an interview that Martin was removed because of issues related to his “character and management style.” She declined to be more specific, and she strongly denied Schlafly herself has been targeted for removal as chairman of the board.

Though Smith is on record endorsing Cruz, she denied that Schlafly’s endorsement of Trump is a point of contention for the board members. “We have always, in Eagle Forum, been free to disagree over candidates,” she said.

But another board member, Cathie Adams of Texas, a Cruz supporter, told the Dallas Morning News last month that she has “no respect” for Trump, and she theorized that Schlafly’s endorsement of him was the result of “manipulation” from an unidentified source.

“When you’re 91, and you’re not out with the grass roots all the time, it is very much taking advantage of someone,” Adams told the newspaper. “We love and respect her, but we disagree.”

Schlafly participated in Monday’s phone meeting. She claimed in her statement that she was “muted” from the meeting after she objected, an allegation Smith vehemently denied.

“(T)he attendees purported to pass several motions to wrest control of the organization from me,” Schlafly alleged in her statement. “They are attempting to seize access to our bank accounts, to terminate employees, and ... to control the bank accounts and all of Eagle Forum.”

For days leading up to the meeting, Schlafly and Martin have been releasing apparently coordinated messages on Facebook, Twitter and email, alleging a planned “hostile takeover” of Eagle Forum by six of its 11 board members — a group Martin, in one missive, dubbed the “Gang of 6.”

Four of those six — Schlafly’s daughter, Cori; Smith; Adams; and Rosina Kovar of Colorado — were listed on a campaign webpage for Cruz in January. They were among 20 Eagle Forum officials from whom Cruz was touting endorsements.

The Eagle Forum, based in Alton, is a conservative interest group that claims a membership of 80,000. It oversees a political action committee as well as a legal fund.

Trump, the front-runner for the GOP presidential nomination, has deeply divided Republicans because of his controversial comments about women, his alleged encouragement of violence at his rallies, his denunciation of immigrants and other issues. Some prominent Republicans have vowed not to support him even if he becomes the party’s nominee.

Schlafly, whose long history of conservative activism includes leading the defeat of the Equal Rights Amendment in the 1970s, has formally endorsed Trump. She appeared with him on stage during his March 11 rally at the Peabody Opera House in downtown St. Louis.

Martin has been a controversial figure himself in posts that have included chief of staff to former Gov. Matt Blunt and as Missouri Republican Party chairman. In both jobs, Martin’s aggressive, heavily ideological style sometimes rubbed even fellow conservatives the wrong way. He also made unsuccessful runs for Congress and the Missouri attorney general’s office.

Donald Trump greets Phyllis Schlafly on stage at the start of Trump's campaign rally at the Peabody Opera House in St. Louis on Friday, March 11, 2016. Photo By David Carson, dcarson@post-dispatch.com 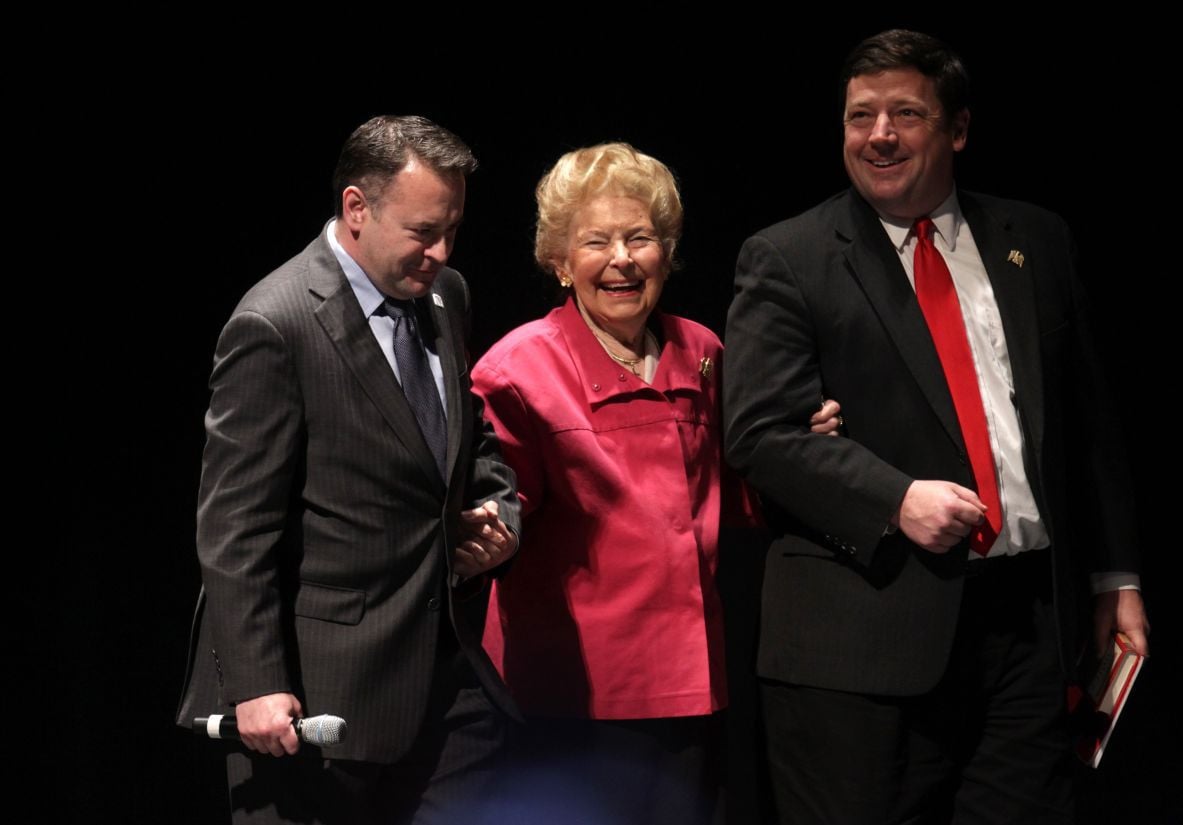 Phyllis Schlafly (center) is escorted on stage during a campaign rally for Donald Trump at the Peabody Opera House in St. Louis on Friday, March 11, 2016. Pictured to the right is Ed Martin, the man on the left is unidentified. Photo By David Carson, dcarson@post-dispatch.com