ST. LOUIS — A circuit court has ruled in favor of St. Louis Treasurer Tishaura Jones, finding that she did not violate city ordinance in executing a three-year contract with a company to manage city parking meter operations.

The lawsuit was part of an ongoing court fight over limits on the treasurer’s power. The suit was initiated by, among others, Alderman Jeffrey Boyd, who ran unsuccessfully against Jones in the Aug. 4 Democratic primary for city treasurer.

Jones on April 10 executed a contract with Hudson and Associates LLC of St. Louis to manage parking meter collections, maintenance and the city’s parking violations bureau.

The court ruled that plaintiffs in the case failed to demonstrate that "the underwriter, garage equipment and parking enforcement and management service contracts violate" the city ordinance, according to the ruling.

"We always thought the treasurer had complied with all the laws and she had a good process for awarding contracts in her office," Jones' attorney, Charles Hatfield, said Monday night. "We’re glad the court agreed."

Then-City Counselor Julian Bush said in a May 27 legal opinion that the contract was invalid because it wasn't in the budget approved by the city's parking commission for that fiscal year, which ended June 30. Jones countered at the time that the parking budget always has handled parking operation contracts on a year-to-year basis.

Plaintiffs in the suit sought to render the contract void as a violation of the city's Professional Services Ordinance. Instead, Jones said in a news release, “If there was anything beneficial gained by this whole ordeal, further research revealed the PSO is inapplicable to my office.” 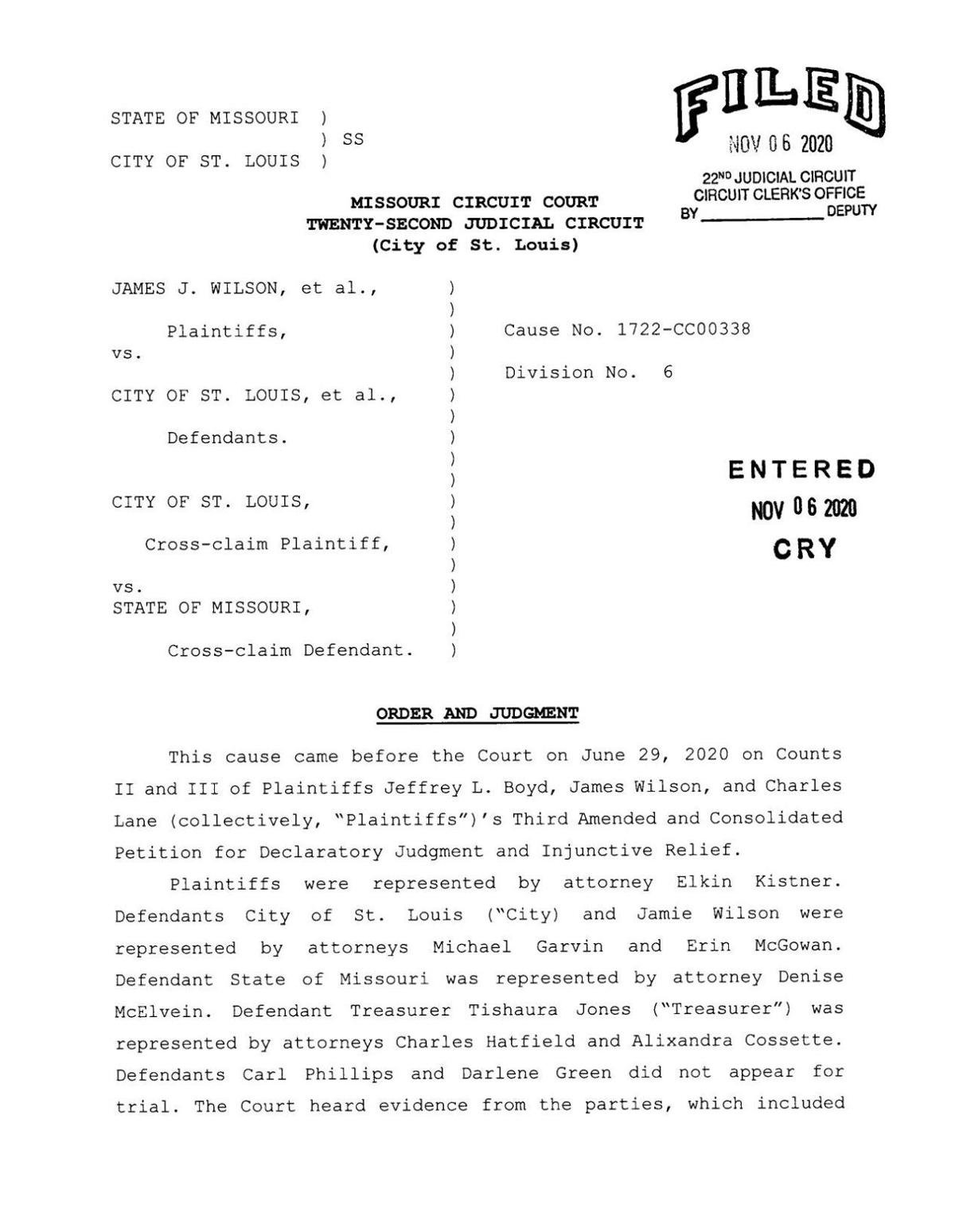 The St. Louis Parking division is dealing with a cash crunch due to plunging revenue from cancelled sporting events and concerts.

Big revenue losses are expected to mount until mid-2021, partly due to cancellation of sports events and concerts.

Tishaura Jones, who is strongly considering running again for mayor next year, first faces an Aug. 4 Democratic primary challenge from Alderman Jeffrey Boyd in her bid for a third term as treasurer.

City Counselor Julian Bush and Alderman Jeffrey Boyd contend that Treasurer Tishuara Jones improperly executed a $2.3-million-a-year contract with a company to oversee some of the city's day-to-day parking meter operations. Jones says she had authority to do so as parking supervisor.

Aldermen approved selling the lot to the developer for $2 million. The treasurer’s real estate consultant values it at $12.3 million.

The tax hike, likely to be on the Nov. 3 ballot, would raise money for early childhood education programs. The election measure will come up for final Board of Aldermen approval next week.

Meanwhile, city treasurer's office projects a $2.67 million decline in parking revenue in the upcoming fiscal year due to the related shutdown of the economy.

Panel votes to use $5 million in St. Louis parking funds to shore up city’s reserves

Alderman and Krewson administration official outvote an aide to city treasurer, who wants to delay the decision.

St. Louis alderman wants to use $5 million in parking fund to deal with coronavirus-spurred shortfall

Boyd, who lost to Jones eight years ago for the same office, has tangled with the treasurer over her handling of city parking operations.

Some have described Lane as a gadfly because of his penchant for suing the city and public officials to stop what he views as abusive government.

Bill, if enacted, would increase the annual merit raise for civil service workers to 3% from the current 1.5% for fiscal years 2021 and 2022. Some full-time workers also would receive a one-time, $1,000 bonus.