Coronavirus in brief: Death rate lower than first thought, plus more of the morning's pandemic news

‘Disagreement in ideology’: Parson’s agenda could face headwinds from within his own party
0 comments
Share this
Subscribe today: $3/3 months
1 of 3 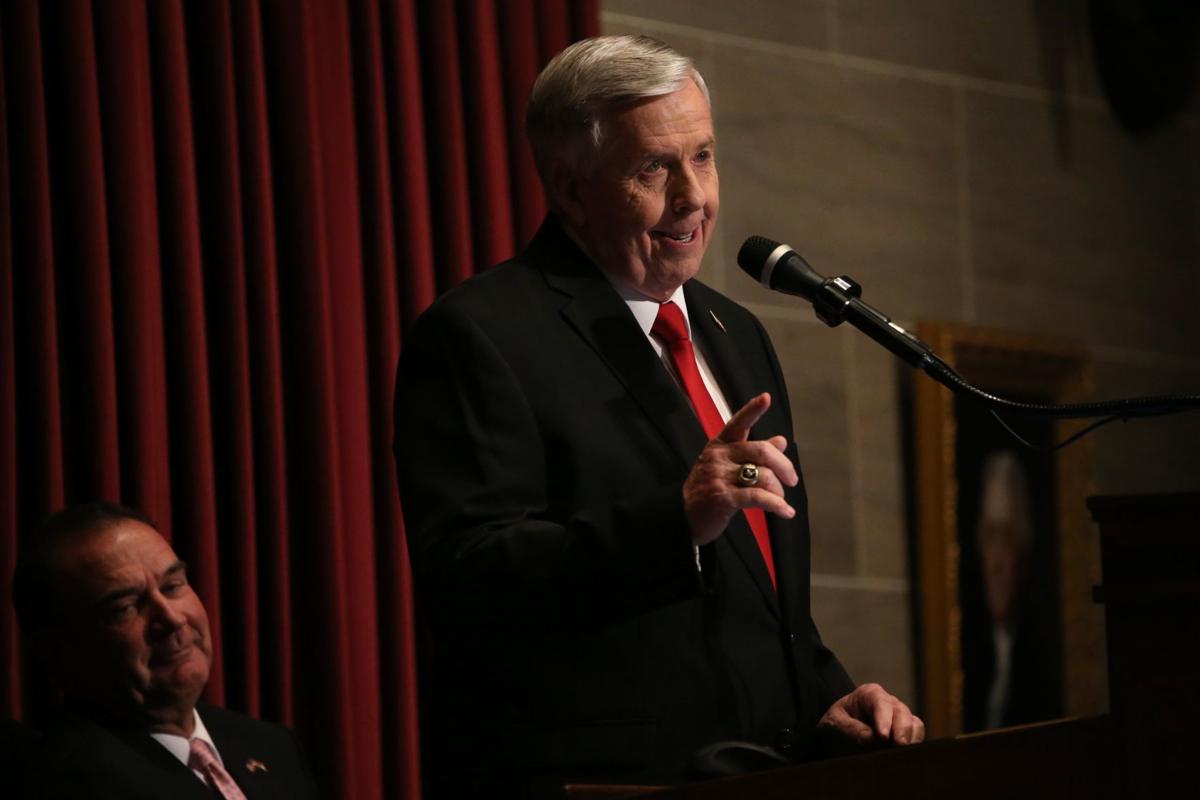 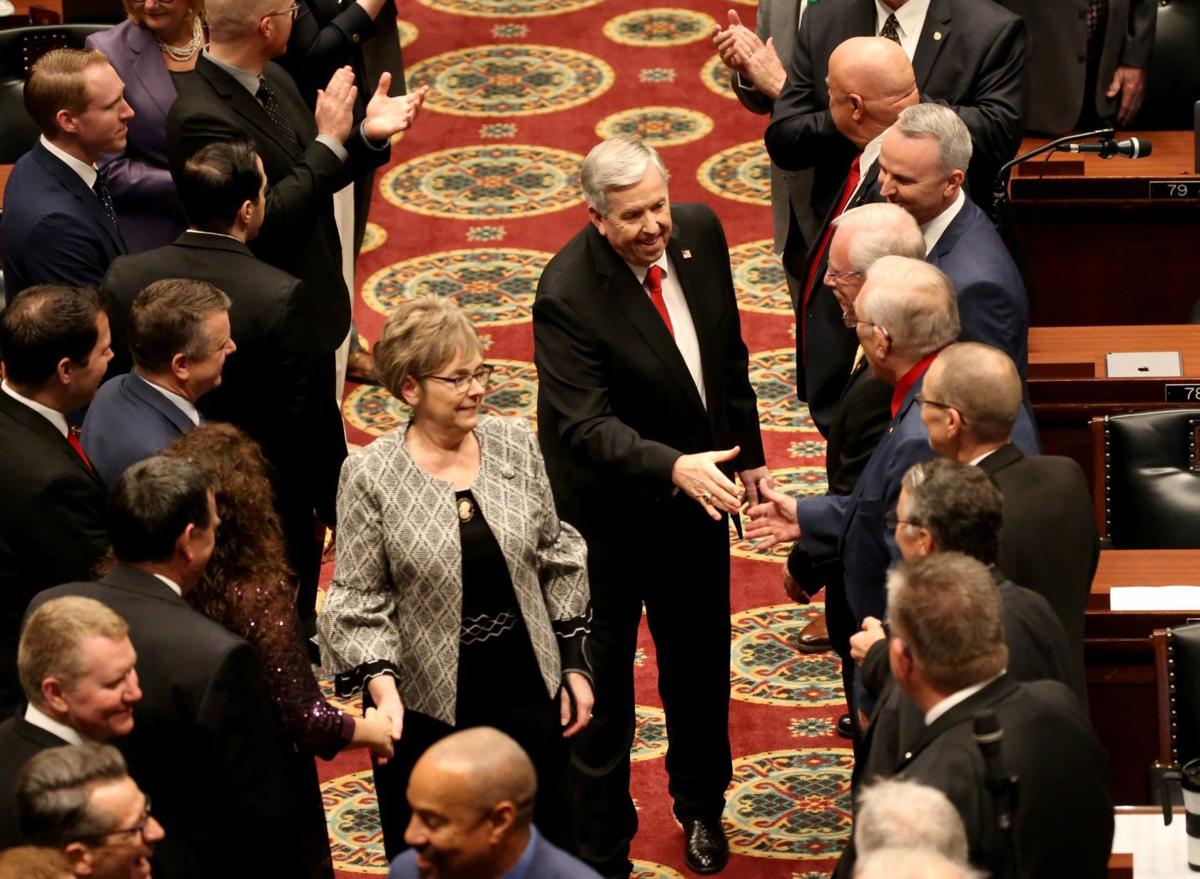 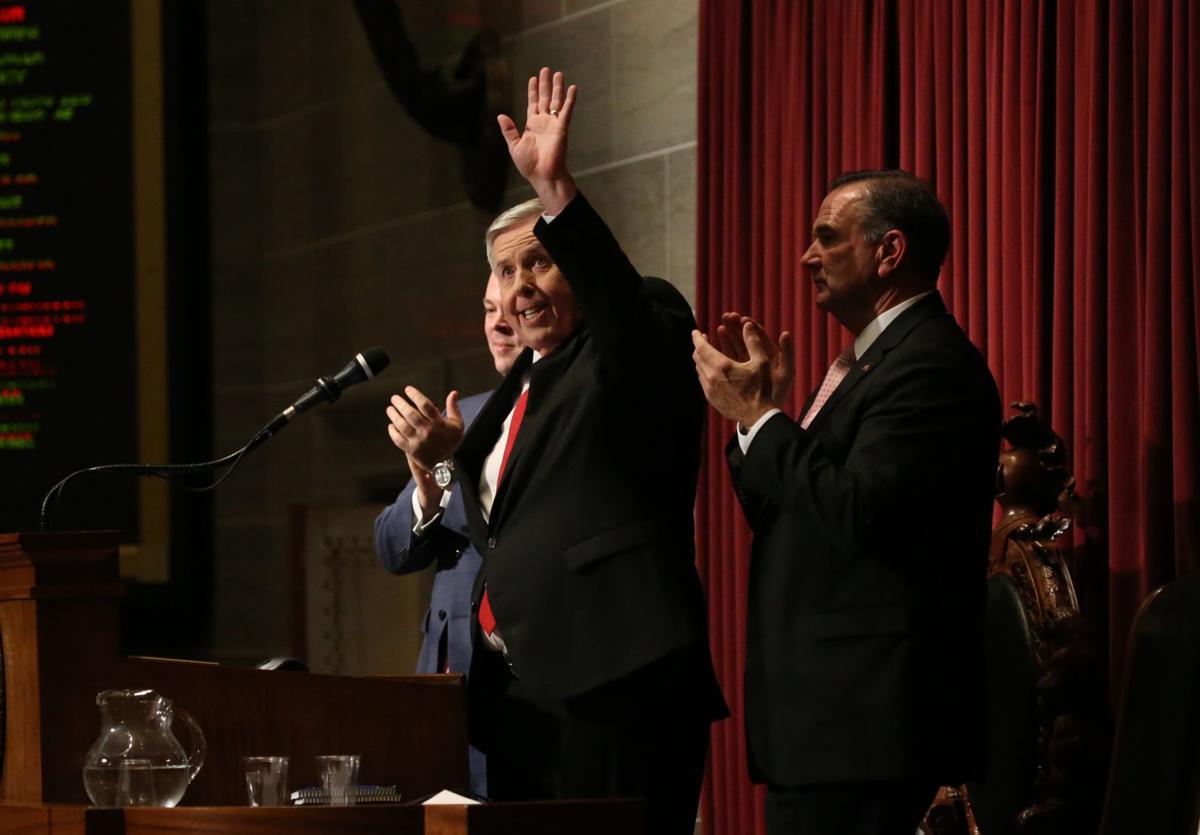 Missouri Gov. Mike Parson waves to lawmakers at the conclusion of the State of the State address at the Missouri State Capitol in Jefferson City on Wednesday, Jan. 15, 2020. Photo by Laurie Skrivan, lskrivan@post-dispatch.com

JEFFERSON CITY — In his annual address to legislators earlier this month, Gov. Mike Parson used the word “together” no fewer than 10 times as he laid out his 2020 agenda to members of the House and Senate.

“I will commit to you that bold ideas and tough challenges will not be something we shy away from,” Parson said, “but my administration is willing to work with this Legislature in a disciplined and focused way … and together, we can achieve big results and lay a solid foundation for our state’s future.”

But even though his Republican Party holds two-thirds majorities in the House and Senate, there’s no sure bet Parson will be able to steer his entire agenda through the legislative branch.

Parson, who is seeking a full term in the November general election, has drawn the ire of Republicans over a number of his decisions, ranging from gun control to his position on refugee resettlement.

Borrowing more than $300 million for road costs, the state’s recent aid package to General Motors, and the Legislature’s approval last year of a “deal-closing fund” to draw out-of-state businesses, has left some fiscal conservatives on the outs.

“We have a disagreement in ideology,” said Rep. Justin Hill, R-Lake Saint Louis, one of four St. Charles County lawmakers who refused last year to back new incentives for GM’s Wentzville plant. “My priorities as a Republican governor would be to cut taxes, reduce spending, use the money that we have to pay for the stuff that we need.

(Parson did sign an income tax cut in July 2018; the law will gradually drop the Missouri’s individual income tax rate to 5.1% if the state meets revenue targets.)

Whether the disagreements affect Parson’s ability to achieve legislative success heading into a general election against Democratic state Auditor Nicole Galloway won’t be known until lawmakers adjourn their annual session in mid-May.

One of the governor’s agenda items is allowing the collection of internet sales taxes by the state. Talks fell apart last year as conservatives pushed for a corresponding income tax cut, resulting in a revenue-neutral proposal.

Parson also wants to continue drawing money from the state’s general coffers for infrastructure costs, even though such expenses had historically been paid for from the state’s road fund, which is paid for by gasoline taxes.

Parson told the Post-Dispatch that he’s unfazed by the tension.

“I think that’s a lot of hype more than anything else,” Parson said. “We’re going to stay focused just like we did last year. There are going to be things we agree on and disagree on.”

“I just think right now it’s too early to even be worried about who’s doing what,” Parson said.

For now, legislative leaders also say the friction that has emerged under the Capitol dome is not an obstacle.

“I think that’s a natural part of the executive branch and the legislative branch, there’s always a sort of tension between them,” said House Speaker Elijah Haahr, R-Springfield.

As an example, Haahr pointed to a number of initiatives pushed by Parson in 2019 that caused consternation among Republicans.

“Not everybody agreed with everything the governor proposed last year, but the bills went through the process and there were negotiations. I think that was fairly typical.” Haahr said. “I remain constantly optimistic.”

Democrats could be the beneficiaries of Republican infighting. On topics where the Republican caucus is split, Democratic votes might be necessary to advance legislation, giving them the opportunity to insert their priorities into bills.

“Sometimes one of the sides needs us, and we agree with them, and it actually gives us an opportunity … to occasionally add a piece to it that we like, something we care about,” said Rep. Peter Merideth, D-St. Louis.

Infighting could also slow progress on issues that a vast majority of Republicans agree on, benefiting Democrats.

“The infighting means that they’re not focusing on other things that by and large Democrats will oppose,” said Rep. Gina Mitten, D-Richmond Heights.

Parson took office in 2018 after former Gov. Eric Greitens resigned under a cloud of scandal. As a former member of the House and Senate, the then-lieutenant governor pledged to calm the waters that had been roiled by Greitens during his contentious 17 months in office.

But, Parson’s decisions have not always had that effect.

Parson’s response surprised some conservatives. Rather than banning refugees, and send a message that immigration is a problem, Parson said refugees boost the state’s workforce and add value and diversity to Missouri’s cities.

Sen. Bob Onder, R-Lake Saint Louis, said in an interview with Missourinet that governors who made similar decisions “did not do what’s best for their states.”

Parson also has rankled lawmakers over his negotiations with the mayors of the state’s larger cities on the subject of gun violence.

In November, Parson said he would back a limited plan addressing gun use by minors, domestic abusers and felons.

The negotiations took place during another bloody year in St. Louis; more than a dozen children had died by gunfire last year at the time of Parson’s announcement.

Vescovo, R-Arnold, said he favors tougher sentencing laws for violations of state firearms laws, but he opposes laws that “infringe” upon the Second Amendment right to bear arms.

The chairman of the House Crime Prevention and Public Safety Committee said he wasn’t consulted before Parson unveiled the package.

Despite the pushback, Parson still invited Krewson and other mayors to his State of the State address on Jan. 15, where he advocated “strengthening our laws to target violent criminals” without mentioning specifics.

The governor and lawmakers also have been at odds over one of the biggest chores awaiting them — crafting the state’s $30.9 billion spending plan.

Unlike other years when the House, Senate and governor’s office agree on a foundation level to start building the annual budget, the House rejected Parson’s estimate of revenue coming into state coffers as too high.

The disagreement means he is starting out with a different spending floor than the House when it comes to piecing together the blueprint.

Parson has faced opposition before and gotten his way.

Last year, with the clock ticking down on the legislative session, opponents of giving General Motors state tax dollars to expand its truck plant in Wentzville used their filibuster powers to delay action in the upper chamber.

Sen. Bill Eigel, R-Weldon Spring, used stalling tactics to chew up hours of valuable debate time as he outlined why he was trying to block the $50 million-plus incentive package.

Eigel said giving companies subsidies is a “path to tyranny,” because it allows government to pick winners and losers.

He eventually handed over filibuster duties to Sen. Andrew Koenig, R-Manchester, who called parts of Parson’s GM package a “disgrace.”

“It is a complete waste of Missouri tax dollars,” Koenig said.

In the end, the opponents ended their filibuster and, in December, Parson was on hand when GM announced it would make a $1.5 billion investment in the factory and retain a minimum of 2,000 of the 4,000 hourly workers.

“Right now, we’re going to keep working as a united front and keeping moving forward,” Parson said after speaking to a group of transportation planners gathered in Jefferson City. “We just need to stay focused on what’s best for the state of Missouri.”

The governor said in the afternoon that there were 502 known cases of COVID-19 in Missouri, up from 356 known cases as of Thursday morning.

‘We need you to step up’: Missouri union leaders fault Parson’s handling of crisis

Complaints roll in from representatives of grocery workers, certified nursing assistants, janitors, state workers and others.

As cases mount, focus shifts from ‘How did you catch it?’ to ‘Who did you expose?'

St. Louis-area health departments are shifting their resources to some degree as they work to contain the spread of the coronavirus.

A local hospital evaluated the male minor and said the minor could recover at the facility.

The state wants help with unemployment assistance, crisis counseling and help for nonprofits and local governments to handle their virus-related expenses.

The fight against coronavirus brings out conservative skeptics in Missouri

Mayor Lyda Krewson said people must continue to comply with restrictions to curtail the spread of the coronavirus.

Missouri Gov. Mike Parson waves to lawmakers at the conclusion of the State of the State address at the Missouri State Capitol in Jefferson City on Wednesday, Jan. 15, 2020. Photo by Laurie Skrivan, lskrivan@post-dispatch.com