As President Donald Trump seeks to discredit last week’s election with baseless claims of voter fraud, his team has bombarded his supporters with requests for money to help pay for legal challenges to the results: “The Left will try to STEAL this election!” reads one text.

But any small-dollar donations from Trump’s grassroots donors won’t be going to legal expenses at all, according to a Reuters review of the legal language in the solicitations.

A donor would have to give more than $8,000 before any money goes to the “recount account” established to finance election challenges, including recounts and lawsuits over alleged improprieties, the fundraising disclosures show.

The emailed solicitations send supporters to an “Official Election Defense Fund” website that asks them to sign up for recurring donations to “protect the results and keep fighting even after Election Day.”

The fine print makes clear most of the money will go to other priorities.

A large portion of the money goes to “Save America,” a Trump leadership PAC, or political action committee, set up on Monday, and the Republican National Committee (RNC). Under Federal Election Commission rules, both groups have broad leeway in how they can use the funds.

The Trump campaign, the RNC and Trump’s new Save America PAC did not respond to requests for comment.

Leadership PACs such as Save America are often set up by prominent political figures to spend money on other candidates, while also paying for personal expenses, such as travel and hotel stays.

The disclosures would allow Trump and the RNC to channel the donations into other political causes or campaigns, such as the two high-stakes January Senate runoff races in Georgia that could determine control of the Senate and are likely to rank among the most expensive races in U.S. history.

Scrolling down the page would take a donor to the fine print, which shows that donations are split between “Save America,” which gets 60% of the money, and the RNC, which gets the other 40%. None of the money flows to Trump’s official “recount” committee fund until Trump’s Save America share reaches the legal contribution limit of $5,000, according to the disclosures.

That means that, before a dollar goes into the recount fund, Save America would receive $5,000 and the RNC around $3,300. Donations to the recount committee are legally limited to $2,800.

One Republican political strategist said Trump is misleading supporters who might give small donations to whatever cause he approves.

“It’s important to be up front with people — especially those who are digging deep into their pockets to come up with $25,” said Michael DuHaime, a former political director at the RNC. “If you tell them it’s going for legal fees, well then it should go for legal fees.”

Darrell Scott, an Ohio pastor who helped found the National Diversity Coalition for Trump and served on the president’s 2016 transition team, says he sees no problems with diverting the money to the leadership PAC or the RNC.

“I see this as two pockets on the same pair of pants. It doesn’t matter if it goes into the left or the right pocket,” Scott said. “In the end, the money will be used for a legitimate purpose that his supporters will get behind.”

The fundraising pitches have channeled Trump’s rage and his refusal to accept the results of an election that major media outlets called on Saturday for his Democratic opponent Joe Biden, the former Vice President. Most of the Republican Party has fallen in line with Trump’s rhetoric, either by staying silent or publicly supporting the election challenges.

Trump’s campaign has filed a flurry of lawsuits to overturn the results in key states without producing evidence to back his charges of illegal voting. Trump’s lawsuits have instead generally alleged violations of process, such as a lack of access for Republican observers. Legal experts said none of the cases were broad enough to invalidate the number of votes required to overturn Biden’s presumed victory.

Judges have quickly dismissed many of the lawsuits. State election officials, including Republicans, have said there was no widespread fraud.

As the president fights what Democrats have called his inevitable ouster from the White House, his fundraising campaign seeks to replenish campaign coffers that were depleted during the presidential race, according to Federal Election Commission data.

Trump’s reelection team kicked off 2020 with an impressive cash advantage, thanks to a massive fundraising operation, including joint efforts with the Republican Party. But the advantage evaporated as Trump’s campaign burned through $1.4 billion of the $1.6 billion raised over the past two years.

By mid-October, the Trump campaign and the Republican Party reelection team were left with $223.5 million and had to scale back advertising. The Trump campaign itself only had $43 million entering the final three weeks of the presidential election, while Biden and the Democrats had $432 million in cash for the final stretch, including $177.3 million in Biden’s campaign.

Trump’s post-election fundraising emails — sometimes issued hourly over the last several days — used names such as the Election Defense Task Force and the Official Election Defense Fund. Initially, the disclosures said that Trump would steer a large part of the contributions to pay down campaign debt.

But the disclosure language changed after Trump’s campaign treasurer, Bradley Crate, incorporated the Save America political action committee on Monday. Crate did not reply to requests for comment.

Unlike campaign funds, which have tight controls on how they can be spent, leadership PACs such as Save America carry few restrictions. Republicans and Democrats alike have drawn criticism for using them to pay family members and to fund luxury events in exotic locations. A 2018 report by the Campaign Legal Center and Issue One, two groups that advocate campaign finance reform, said some leadership PACs have been used as vehicles to “subsidize lavish lifestyles” of politicians “on their donors’ dimes.”

Larry Noble, former general counsel at the Federal Election Commission, said Trump could use the committee to finance a post-election political career. He said the pitch is misleading for donors who don’t read the fine print.

“He’s really making a big deal about the challenge to the election, and that may very well be why a lot of people may give without paying attention to, or understanding, what the political language is,” Noble said. “It’s pretty dangerous to our democracy to use attacking our elections as a fundraising tool.”

The North Carolina Republican Party has launched a similar strategy, using the election challenges as a way to raise money for other purposes. In several mass emails to potential donors this week, the party says — alongside images of Trump — that it is seeking money to help protect the integrity of the elections.

The legal disclosures, however, show the money is going to an account to pay for the party’s overhead costs and not directly to any challenges of this presidential election. Trump won North Carolina’s 15 electoral votes.

“They should be more transparent,” said one prominent North Carolina Republican, speaking on condition of anonymity. “If they are soliciting money to help with a legal challenge, and instead the money is going to pay the salary of the political director, that doesn’t seem right.”

Tim Wigginton, a spokesman for the North Carolina Republican Party, said in a statement that the party wants to “ensure every legal ballot is counted” but did not address questions about whether the fundraising appeals are misleading or why the donations are not being directed to legal defense. 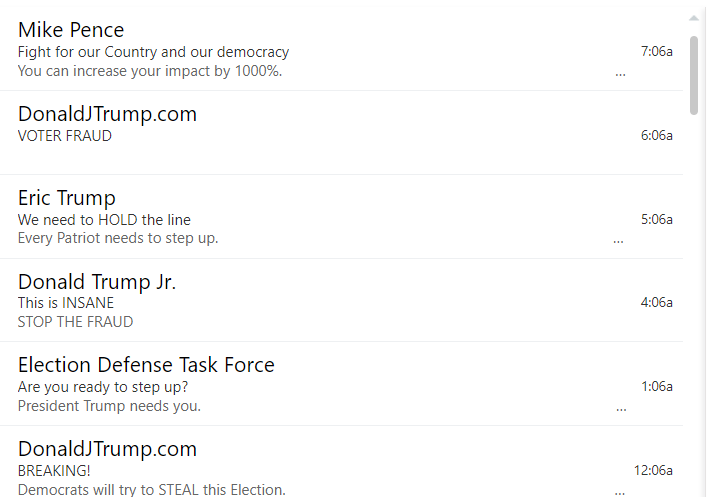 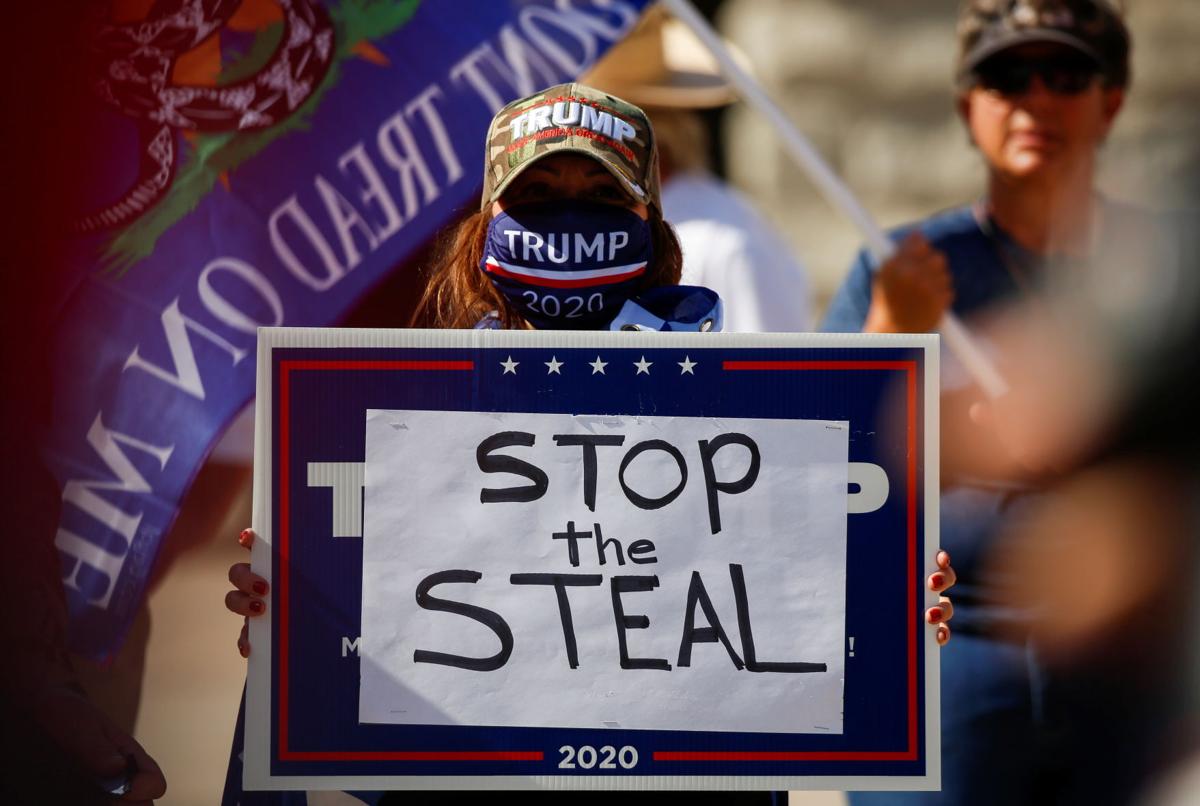 A supporter of President Donald Trump holds a sign during a “Stop the Steal” protest after the 2020 U.S. presidential election was called by the media for Democratic candidate Joe Biden, in front of the Arizona State Capitol in Phoenix on Nov. 7, 2020. REUTERS/Jim Urquhart