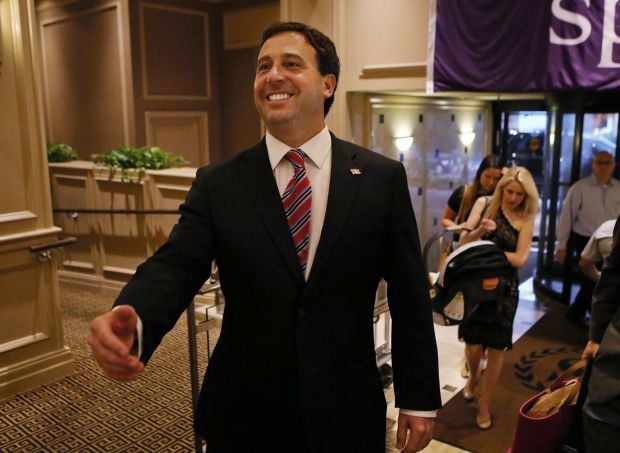 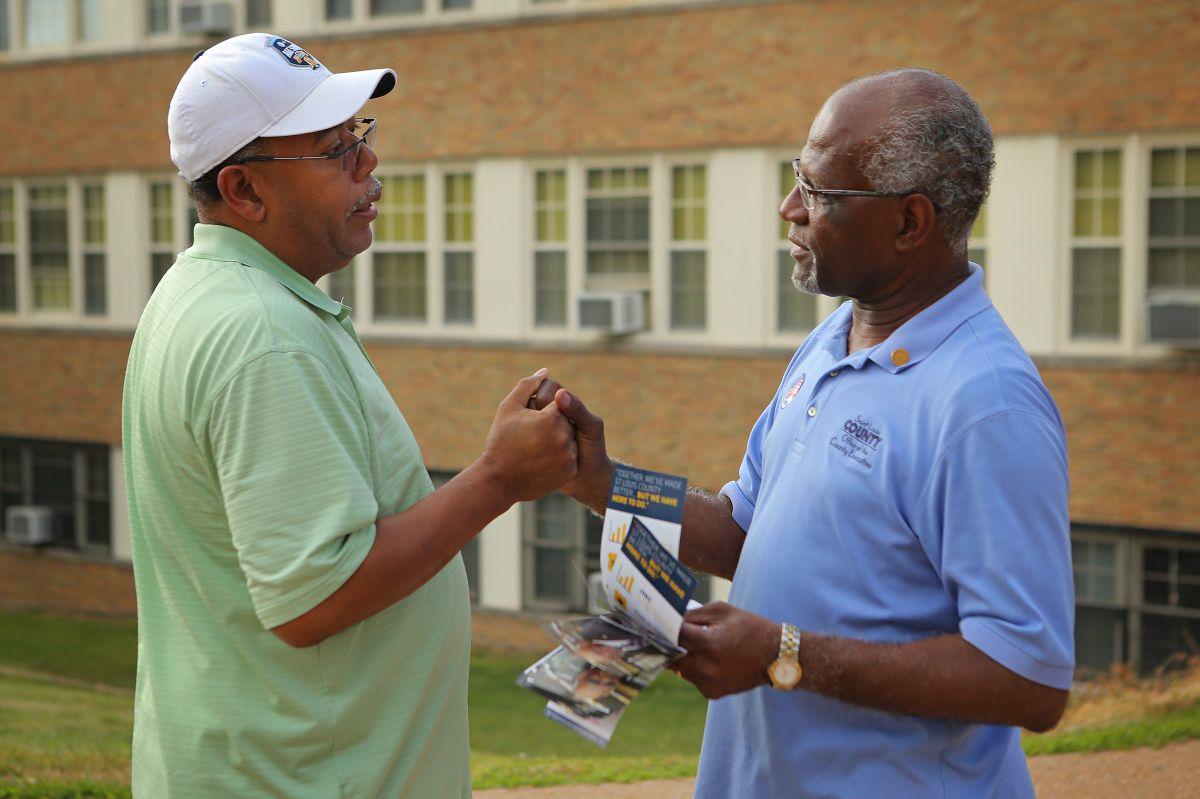 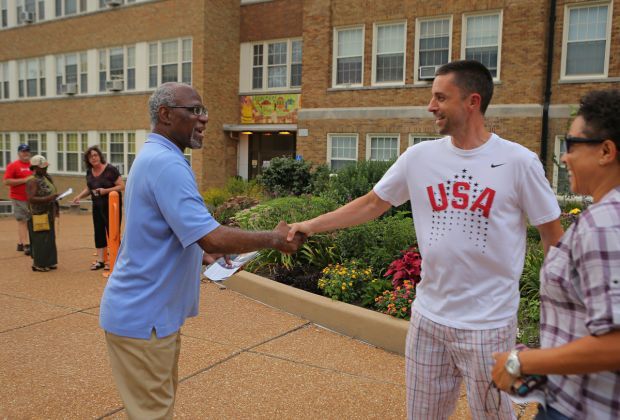 St. Louis County Executive Charlie Dooley shakes hands with Kevin Grawer and his wife, Allegra Grawer, as the pair head in to vote at their polling place at University City High School on Tuesday, Aug. 5, 2014. Photo By David Carson, dcarson@post-dispatch.com 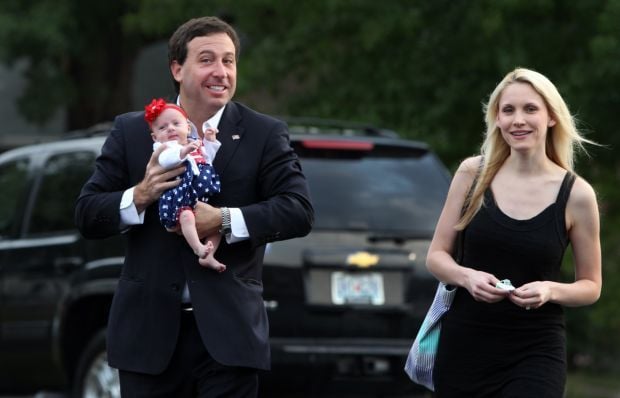 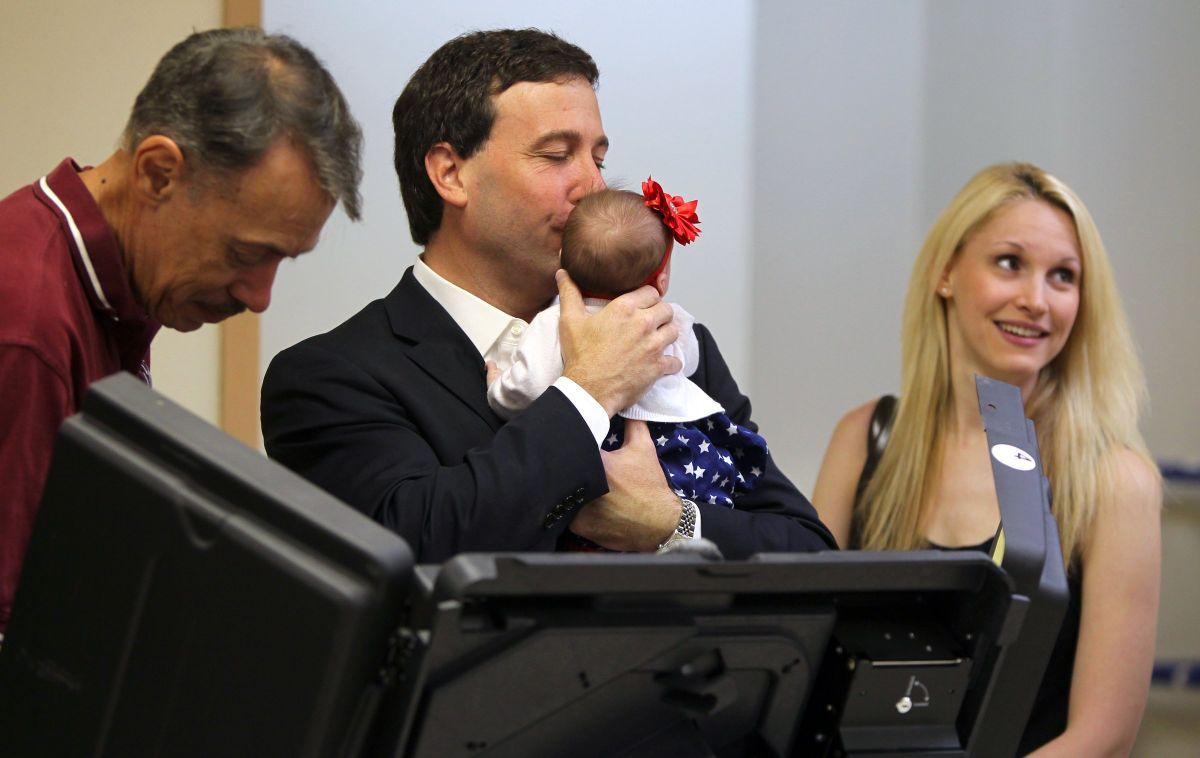 Steve Stenger kisses his daughter Madeline as he and his wife Allison prepare to cast their votes at Affton Presbyterian Church on Tuesday, August 5, 2014. Stenger is running in the Democratic primary against St. Louis County Executive Charlie Dooley. Photo by Robert Cohen, rcohen@post-dispatch.com 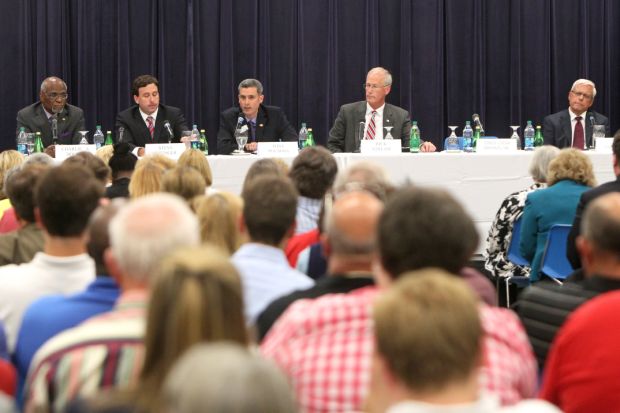 St. Louis County Executive Charlie Dooley has conceded defeat in his quest for re-nomination to the post by Democratic voters.

In his concession to supporters, Dooley said it has been "a great 11 years" during his tenure.

"The voters of St. Louis County have spoken and I accept it," Dooley said.

Of his Democratic primary opponent, County Council member Steve Stenger, Dooley said: "I really wish him well. . . . I don't want to be an obstacle."

Stenger vowed to supporters that he will "turn the county around."

"This campaign has never been about Democrat and Republican politics, it's been about restoring confidence in county government," he said. "If you elect me as county executive, I will lead by example. Over the next three months let's show them a campaign that's on their side, let's show them we'r truly listening."

Stream, in comments to his supporters, said he has heard complaints of small business owners who "want change, and they don't see the change coming from the Democratic Party."

Dooley's camp is pinning its hopes on the possibility of a late surge in uncounted areas of north St. Louis County, where he enjoys strong support.

“Right now, we are looking at results and it looks like north county has not been counted yet," said Dooley spokeswoman Linda Goldstein.

"So we are still very hopeful. We are are really counting on the north county vote to push us over.”

Goldstein later made the same case to a noticeably worried crowd of Dooley supporters. “Right now we are down, but this is reminiscent of the 2010 [election]," she told supporters at about 10 p.m. "Remember, we came back. We are very hopeful.”

Dooley took the stage at his campaign party to loud cheers and told the crowd that it will be a long night.

"All we have right now are absentees and 20 precincts. That's all," he said, as media coverage was reporting him trailing in very early returns.

"They are predicting last numbers [will be in] not until 11:30 or midnight. It could be a long night," he said. "I say we have done this before, we are still gonna win this thing. It's just going to take, like the last time, half the night."

In the most-watched election race in the St. Louis region tonight, long-time incumbent St. Louis County Executive Dooley is fighting for his political life against council member Steve Stenger. The two Democrats are vying for their party's nomination to the Nov. 4 general election.

The winner will go up against the GOP nominee: either state Sen. Rick Stream, R-Kirkwood, or Green Park alderman Tony Pousosa.

The St. Louis area labor leaders who last year launched the 2014 primary challenge to Dooley by announcing their support for Stenger began filtering into the ballroom of the Sheraton Clayton Plaza — election night headquarters for the Democratic councilman — shortly after the polls closed at 7 p.m.

Dooley campaign treasurer John Temporiti shrugged off the absentee tally as he predicted the incumbent would prevail by 1-2 percentage points by the end of the evening.

“Charlie Dooley has been for labor for 35 years, and that counts.”

Stenger is expected to arrive shortly to await election results in a hotel suite.

With few substantive differences between Dooley and Stenger on the issues, their race has focused in part on controversy over embezzlement in the county health department and a $3.7 million heating and air conditioning contract for a new St. Louis County Police lab that went to a company co-owned by a Dooley government appointee.

Stenger’s supporters say the controversies reflect on Dooley’s leadership. Dooley’s supporters note that he has not been implicated in the FBI investigations and point to the county’s success in attracting jobs and development.

"Mayor Slay is at National Night Out. He is keeping in touch but will not be here," she said. "He is traveling the city."

The GOP race between Stream and Pousosa has been as polite as the Democratic race has been raucous, with the focus on their joint vows of reform and fiscal responsibility.

Transportation tax fails; "right to farm" down to the wire

UPDATED AT 11 p.m. with reaction from Missouri transportation officials.

Experts wonder if crossover votes stick with Stenger or return to Stream in November.

Results from the Aug. 5 Missouri primary

Get the latest results from Tuesday's Missouri primary.

From voting in the morning to a behind-the-scenes look at election returns, Post-Dispatch photographers created a fascinating set of pictures …

St. Louis County Executive Charlie Dooley shakes hands with Kevin Grawer and his wife, Allegra Grawer, as the pair head in to vote at their polling place at University City High School on Tuesday, Aug. 5, 2014. Photo By David Carson, dcarson@post-dispatch.com

Steve Stenger kisses his daughter Madeline as he and his wife Allison prepare to cast their votes at Affton Presbyterian Church on Tuesday, August 5, 2014. Stenger is running in the Democratic primary against St. Louis County Executive Charlie Dooley. Photo by Robert Cohen, rcohen@post-dispatch.com