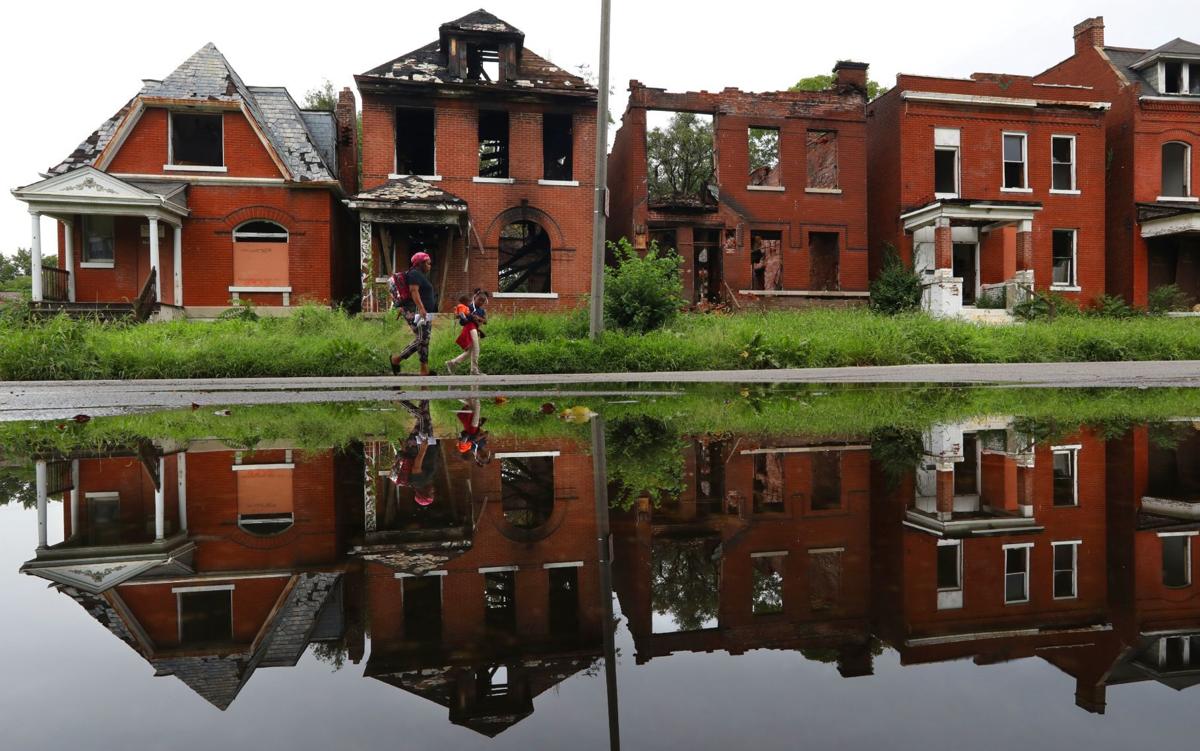 Five vacant homes line the 3900 block of Labadie Avenue in the Greater Ville neighborhood of north St. Louis, reflected in a large puddle left from a rainstorm on Wednesday, Aug. 29, 2018. Of the five, four are owned by the Land Reutilization Authority (LRA) and one is private. Two of the five were recently slated for demolition after a fire in 2017. The one-block stretch contains 14 vacant properties. Photo by Robert Cohen, rcohen@post-dispatch.com

Cori Bush on her swearing-in day, Jan. 3, in Washington.

ST. LOUIS — A bill by U.S. Rep. Cori Bush aims to tackle environmental racism by creating a sweeping study of factors — from lead pollution to food deserts and police killings — that disproportionately affect public health in Black neighborhoods across the country.

The study would create a national database of a growing body of research on the parallels between racial and environmental inequities in segregated neighborhoods, including a 2019 Washington University report that found the city’s Black residents are exposed to far greater environmental risks than whites.

In addition to the neighborhood-level, nationwide study, the legislation — introduced Thursday by Bush, D-St. Louis, and written with Sen. Ed Markey, D-Mass. — would help direct federal funding for environmental and public health initiatives to the areas that need it most.

“Environmental justice is racial justice,” Bush said in a news conference with Markey and local activists. “Our environment is just as much about the climate as it is the world that has been built around us that affects the air we breathe, the safety of our streets, the quality of our homes and the prices of our energy bills.”

The bill is aimed at directing 40% of federal funding on climate initiatives to areas most affected by environmental inequities, Bush said, following President Joe Biden’s Wednesday unveiling of an ambitious plan to stave off the worst effects of climate change.

“That which gets measured gets done,” Bush said.

The report, compiled by Washington University on behalf of four area nonprofits, found that a lack of investment in Black neighborhoods has led to vacant properties, illegal trash dumping and fewer grocery stores and means of public transportation.

The disparity fuels stark differences in health, wealth and quality of life between neighborhoods, the report said: “It should come as no surprise that black St. Louisans are disproportionately harmed by lead poisoning, asthma, mold, and high energy costs — “all of which are associated with factors such as substandard housing conditions and air pollution — due to living near industrial facilities, highways and building demolitions.”

Other WU studies have documented similar disparities, including in air quality. A 2020 report by the university found the city’s poor, segregated neighborhoods are at a greater risk of cancer from air pollutants, and proximity to heavy traffic accounts for a leading share of that vulnerability.

Bush said the national study would also examine impacts of radioactive waste left over from uranium production that was buried in the West Lake Landfill Superfund site in Bridgeton, and also along sections of Coldwater Creek, which runs from St. Ann to the Missouri River.

The study would include rates of police killings and misconduct, as well as gun violence, Bush said, citing a recent study by ArchCity Defenders that found at least 179 people died from 2009 through 2019 in jail or in incidents involving police in the region.

“When you have an environment where I just can’t leave home and go jog … when that can be a lethal thing, that is an environmental issue that has to be addressed,” Bush said.

Karisa Gilman-Hernandez, with the local Dutchtown South Community Corporation, said Thursday that Bush’s legislation would give local activists and officials a path forward.

“We will be able to look at our new Board of Aldermen and mayor, (and) we’ll be able to go to state legislatures ... and really push forward the solutions our community wants to see,” she said.

I'm honored to partner with @SenMarkey on the introduction of the Environmental Justice Mapping and Data Collection Act of 2021, which will bring St. Louis to the forefront in the fight to end environmental racism.

Here's what it'll do and why we need it:

Markey previously joined with U.S. Rep. Alexandria Ocasio-Cortez of New York, a progressive and ally of Bush in Congress, in drafting the Green New Deal, which called for bold action to address the effects of climate change and create jobs in the sustainable resources industry.

This a historic moment for the climate movement. Now we must build on our momentum. Join me live with @RepCori as we introduce the Environmental Justice Mapping & Data Collection Act to identify and serve communities most in need of bold climate action. https://t.co/cCmSBvAZCg

Democratic Rep. Cori Bush of Missouri announced Friday that she will be moving her office away from GOP Rep. Marjorie Taylor Greene of Georgia, following a heated exchange earlier this month where Bush confronted Greene about not wearing a mask in a hallway on Capitol Hill.

Five vacant homes line the 3900 block of Labadie Avenue in the Greater Ville neighborhood of north St. Louis, reflected in a large puddle left from a rainstorm on Wednesday, Aug. 29, 2018. Of the five, four are owned by the Land Reutilization Authority (LRA) and one is private. Two of the five were recently slated for demolition after a fire in 2017. The one-block stretch contains 14 vacant properties. Photo by Robert Cohen, rcohen@post-dispatch.com

Cori Bush on her swearing-in day, Jan. 3, in Washington.