JEFFERSON CITY — Former Missouri Gov. Eric Greitens announced Monday he will run for the U.S. Senate next year, nearly three years after he resigned in disgrace after he was accused of sexual misconduct and campaign finance violations.

Greitens’ entry into the race to fill the seat held by retiring U.S. Sen. Roy Blunt, R-Missouri, promises to generate discord within the state GOP, with Republicans who moved to oust Greitens in 2018 now forced to either back the ex-governor or line up behind an alternative.

Greitens, 46, made his announcement Monday evening on Fox News.

Greitens described himself as a “fighter” for Missourians who would defend President Donald Trump’s policies and protect Missourians “from Joe Biden, Nancy Pelosi and Chuck Schumer’s radical leftist agenda.”

Greitens resigned as Missouri governor on June 1, 2018, months after revelations he had an extramarital affair before he became governor. His ex-lover eventually testified that Greitens groped and hit her. She alleged that on one occasion, Greitens insisted she give him oral sex, even though she was crying.

Greitens also faced felony charges of computer tampering in St. Louis for allegedly stealing a donor list from the charity he founded, the Mission Continues.

Greitens tweeted that he’d been endorsed by Rudy Giuliani, the former mayor of New York City and a personal attorney for Trump.

Honored to have the support of America’s Mayor— my friend, @RudyGiuliani. pic.twitter.com/DARrVyM13S

As of Monday evening, no campaign paperwork from Greitens was in evidence on the Federal Election Commission’s website.

Candidates aren’t allowed to use state campaign accounts for federal races such as Senate and U.S. House.

Greitens spent 2020 attempting to rehabilitate his image by spending thousands of dollars from his state campaign account on public relations efforts.

He was propelled by the February 2020 resolution of an ethics complaint originally filed in 2018. The Missouri Ethics Commission found reasonable grounds his campaign violated state law, and Greitens’ campaign was hit with a $178,000 fine.

The ethics commission didn’t find that Greitens had personal knowledge of the violations but said candidates are ultimately responsible for the actions of their campaigns.

The ad doesn’t make clear what the “exoneration” applied to — the sexual misconduct? The stolen charity list? — but implies falsely that the ethics commission cleared him of all alleged breaches of which he had been accused.

Greitens and former Missouri first lady Sheena Greitens announced last year they were getting a divorce.

The field of other potential GOP candidates remained fluid on Monday.

“I think he has demonstrated the moral, ethical and political malfeasance that voters should find disqualifying,” Hancock said Monday.

One potential candidate took himself out of the running for 2022 on Monday.

Lt. Gov. Mike Kehoe said he won’t be a candidate for the Republican nomination for U.S. Senate, announcing he would instead run for governor in 2024.

Kehoe, 59, said in a statement “my true calling remains to work on behalf of Missourians in Missouri as lieutenant governor and as a candidate for governor in 2024.”

The state’s No. 2 official expressed interest in the race after Blunt announced he wouldn’t seek a third term — prompting a long list of Republicans and Democrats to say they were weighing the possibility of entering the 2022 Senate contest.

Secretary of State Jay Ashcroft, who like Kehoe publicly said he was considering a Senate bid, has also passed on the race.

Ashcroft could opt to run for governor in 2024, but unlike Kehoe, he didn’t make that announcement when he issued a statement forgoing a Senate run.

Smith, if he runs, would join Attorney General Eric Schmitt and former Gov. Eric Greitens in the GOP primary.

Republican candidates for U.S. Senate in 2022 are all expected to seek Trump’s endorsement.

Roy Blunt, at Springfield airport, declines to insert himself into GOP scramble for his seat

Multiple Republicans expressed interest in running to replace Blunt, a Republican first elected to the Senate in 2010. 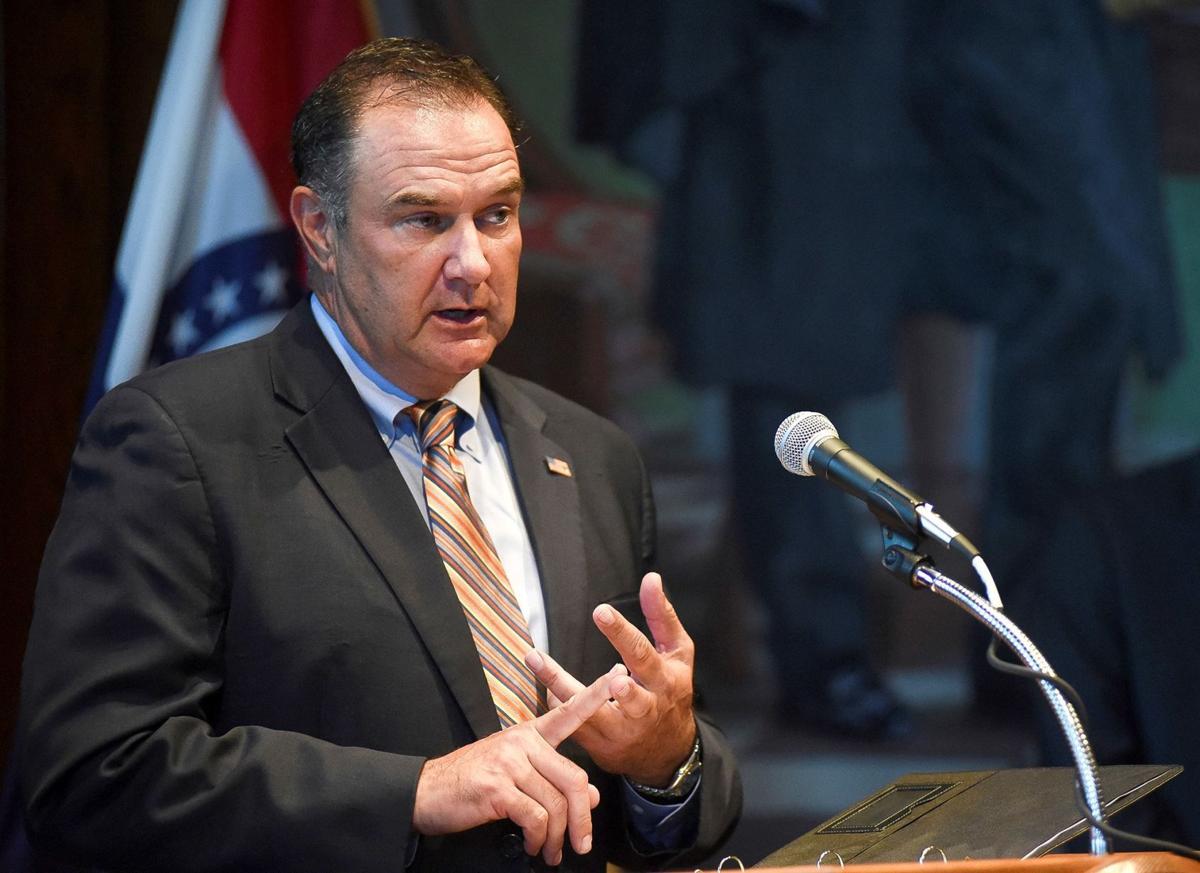 FILE - In this June 18, 2018, file photo, Missouri Lt. Gov. Mike Kehoe makes his opening statement during a news conference in the governor's office at the Missouri State Capitol in Jefferson City. Mo. Republican Lt. Gov. Kehoe said Monday, March 22, 2021, that he will not seek the Republican nomination in 2022 but will instead run for governor in 2024. (Emil Lippe/The Jefferson City News-Tribune via AP, File)

FILE- In this May 17, 2018, photo, then Missouri Gov. Eric Greitens waits to deliver remarks to a small group of supporters near the capitol in Jefferson City, Mo. Greitens' political future seemed doomed by scandal when he resigned as Missouri governor. Now, he appears primed to test whether Sen. Roy Blunt's retirement provides a path for redemption within a Republican Party searching for direction after former President Donald Trump's election loss. (AP Photo/Jeff Roberson, File)