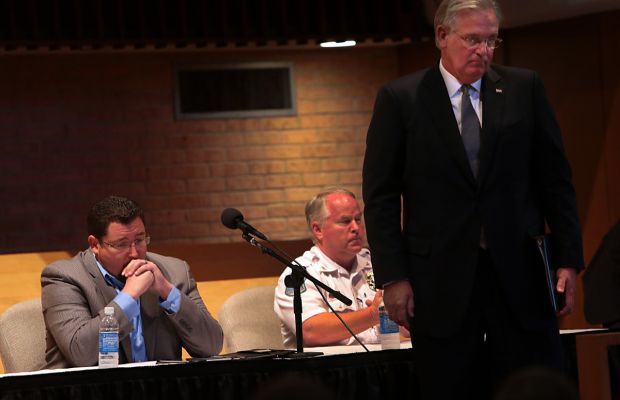 Gov. Jay Nixon (right) leaves the altar after speaking on the death of Michael Brown at at Christ the King United Church of Christ near Black Jack on Tuesday, Aug. 12, 2014. Behind Nixon are Ferguson Mayor James Knowles (left) and Police Chief Tom Jackson. Photo by Robert Cohen, rcohen@post-dispatch.com 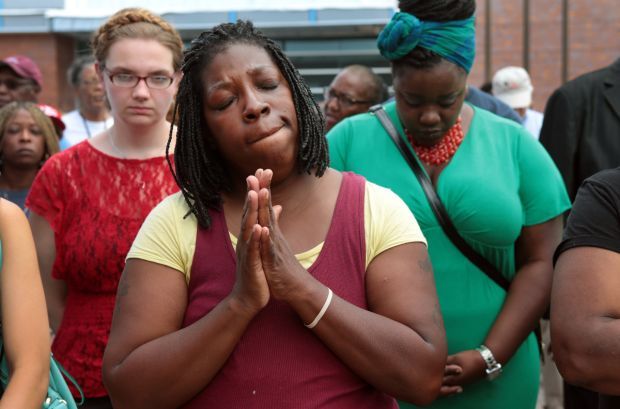 A prayer vigil was held in front of the Ferguson police department on Sunday, Aug. 10, 2014, one day after a Ferguson officer shot and killed Michael Brown. Martha Hightower (center) joined in prayer. Photo by Robert Cohen, rcohen@post-dispatch.com 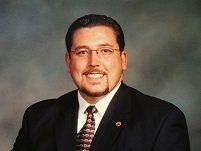 FERGUSON • The Ferguson City Council announced plans Monday to make changes designed to reduce court fine revenue, reform court procedures and start a Citizen Review Board that will help keep an eye on and guide the police department.

“The overall goal of these changes is to improve trust within the community and increase transparency, particularly within Ferguson’s courts and police department,” Councilman Mark Byrne said in a statement.

“We want to demonstrate to residents that we take their concerns extremely seriously. That’s why we’re initiating new changes within our local police force and in our courts.”

While the city is making these changes, officials will hold ward meetings to get public input.

Some of the proposals are on the agenda for the City Council meeting at 7 tonight at Greater Grace Church, 3690 Pershall Road.

Devin James, the media contact with the public relations firm representing the city, said Monday night that nobody from the city would be available to comment beyond a press release about the proposals. Messages left with City Council members and the mayor were not returned Monday night.

One of the ordinances that will be introduced tonight ensures court fine revenue stays at or below 15 percent of the city’s total revenue, and that any court revenue over that amount is used for special community projects instead of general revenue uses.

Council members hope that this change “sends a clear message that the fines imposed as punishment in the municipal court are not to be viewed as a source of revenue for the city,” the press release said.

Officials said they hope this change will encourage the municipal judge and prosecutor to use alternative sentencing methods, like community service, as punishment.

Another proposed ordinance would repeal the separate offense of “failure to appear” in municipal court. Defendants who don’t show up would no longer face a new fine.

Another ordinance would abolish the $25 administrative fee that goes along with towing costs; the city will now pay for that.

Another would take away a $50 warrant recall fee and a $15 notification fee that goes along with a case where a defendant has failed to appear.

The municipal judge has also established a special docket for defendants who are having problems making monthly payments on outstanding fines. This docket will allow those people another chance to talk to the judge or prosecutor to possibly modify a payment plan or seek alternative sentencing. The judge also established a warrant recall program which will run from Sept. 15-Oct. 15. Defendants with outstanding warrants are asked to call the court clerk to get information about having an existing warrant recalled.

City officials also plan to partner with Dellwood and St. Louis County to get funding for the West Florissant Great Streets Project.

The Great Streets Project means that the city will seek federal and state highway funds and other sources to improve the entire corridor of West Florissant.

The announced changes come in the wake of general demands to improve operations in police departments and municipal courts.

Those demands grew stronger in the wake of the shooting of an unarmed black teenager, Michael Brown, on Aug. 9 by Ferguson police Officer Darren Wilson.

The shooting triggered huge protests and clashes with police, which reflected a long-standing racial divide in the region.

Last week, U.S. Attorney General Eric Holder announced a Justice Department investigation of Ferguson’s use of force, searches, arrests and “revenue raising on the basis of traffic stops.” Also, the ArchCity Defenders, a legal charity for low-income citizens, joined a group from St. Louis University law school in calling for statewide changes that would let municipal courts go easier on the poor.

Thomas Harvey, executive director of ArchCity Defenders, said he was generally pleased with the changes and proposed changes that Ferguson has announced. “The spirit of this is a great first step,” he said. “I’m hoping they can improve upon it, and hopefully be a model for other municipalities.”

He said that the warrant recall may not necessarily help clients who have warrants in several other municipalities, who may have to “muni-hop” after being stopped for a traffic violation. He’s also curious if the city will send a summons for those who fail to appear in court or schedule them for a show cause hearing.

“I’m interested to see what the details are of these things,” he said. “The spirit of it is fantastic. I’m really happy to see they’re thinking creatively and working with the community to try to do this.”

Lawsuits allege Bel-Ridge has no authority to operate municipal court

‘I think I’ve done some things that have made a big difference, and I’m very proud of the accomplishments of the last four years and the 19 before that.’

Councilman Tim Fitch has asked the county counselor whether the council could delay tax collection until April 30 and also abate some taxes.

Many say they formed their opinions by watching emergent right-wing media outlets such as Newsmax and One American News Network that have amplified Trump’s fraud claims.

Gov. Jay Nixon (right) leaves the altar after speaking on the death of Michael Brown at at Christ the King United Church of Christ near Black Jack on Tuesday, Aug. 12, 2014. Behind Nixon are Ferguson Mayor James Knowles (left) and Police Chief Tom Jackson. Photo by Robert Cohen, rcohen@post-dispatch.com

A prayer vigil was held in front of the Ferguson police department on Sunday, Aug. 10, 2014, one day after a Ferguson officer shot and killed Michael Brown. Martha Hightower (center) joined in prayer. Photo by Robert Cohen, rcohen@post-dispatch.com