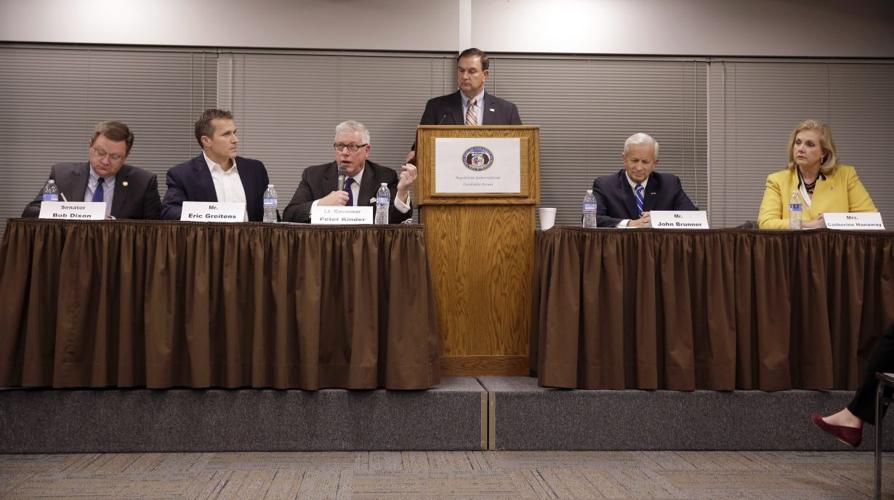 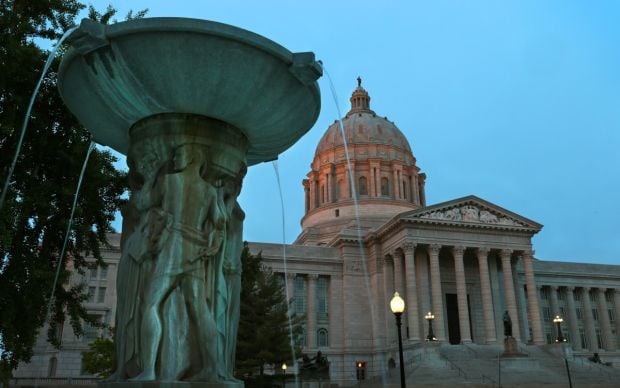 The Missouri Capitol at dusk on May 16, 2014. Photo by Robert Cohen, rcohen@post-dispatch.com 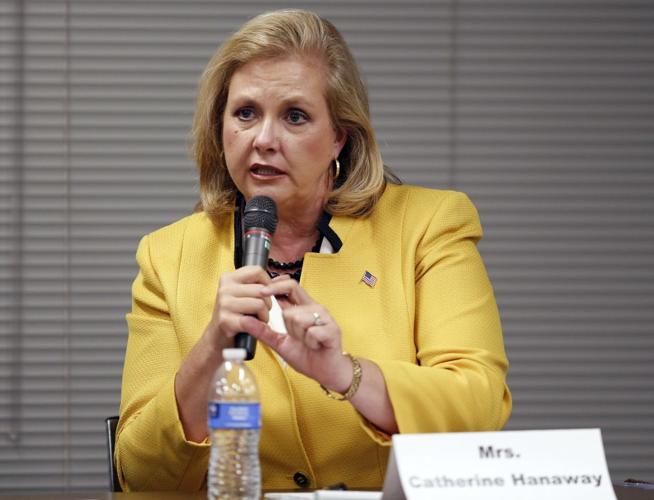 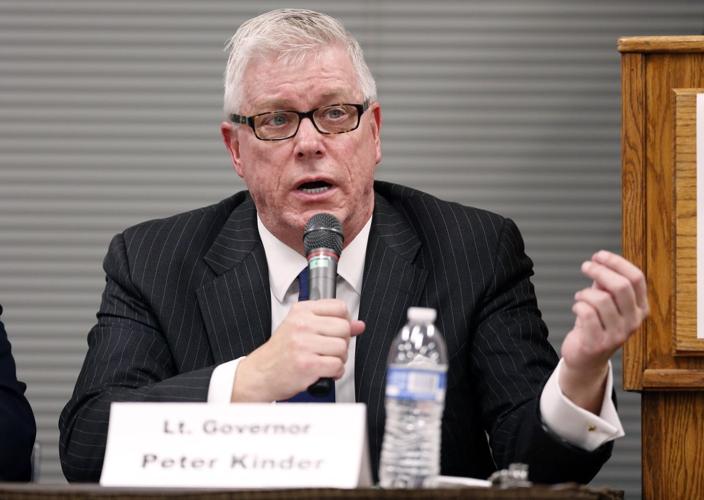 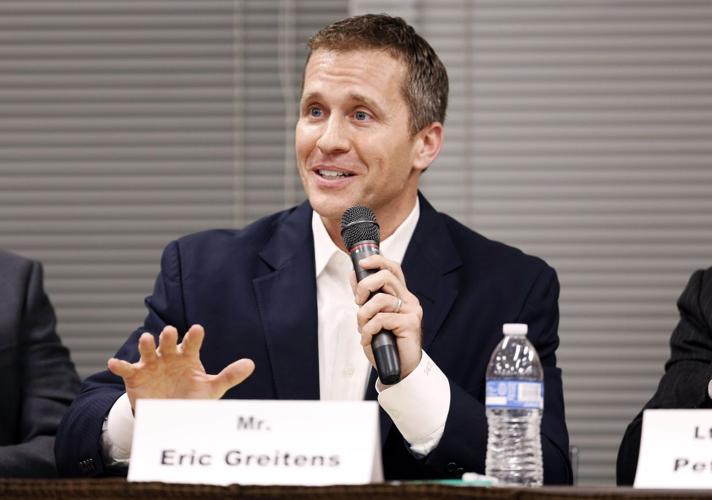 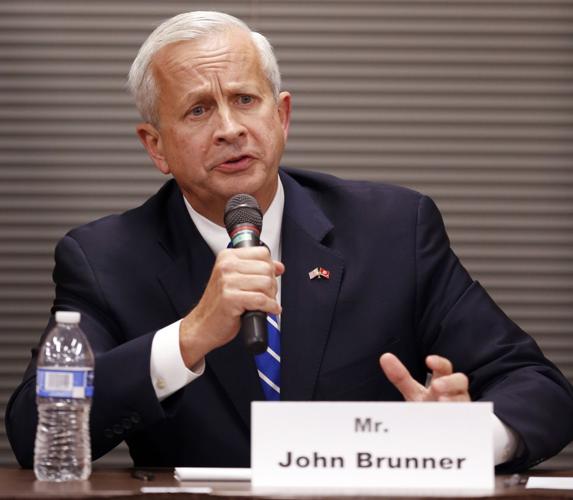 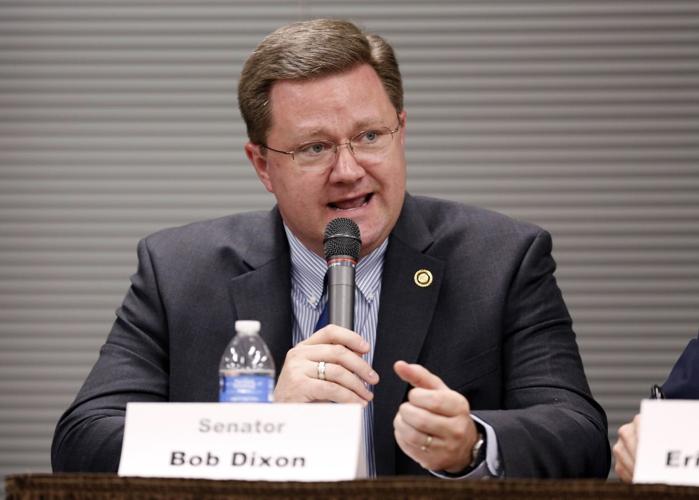 Instead, the candidates focused on their individual experiences to make pitches to Republican voters.

The candidates were asked six questions, which they answered in front of a group of about 300 people. The atmosphere was cordial, with only a few jabs at Attorney General Chris Koster, currently the sole Democratic candidate for governor. Gov. Jay Nixon cannot run for re-election next year because he of term limits.

When asked about attracting new businesses to the state, all candidates except Brunner expressed support for right-to-work legislation, which would prohibit companies from requiring union membership or dues as a condition of employment.

“I’m the only candidate in this race who has ever cast a public vote in support of right to work,” Dixon said, stressing his role as a veteran lawmaker. He added that he would sign the legislation if elected governor.

Republicans tried and failed this year to make Missouri the 26th right-to-work state. They pushed the measure through during the legislative session in May using aggressive parliamentary tactics, but Nixon, a Democrat, vetoed the bill. Lawmakers failed to override his veto during the annual September veto session.

Brunner did not mention right to work, but he touted his business credentials and pledged to attract businesses to the state.

“I know what we need to do to get competitive and when we get competitive, we’ll bring business back to Missouri,” Brunner, former CEO of the hand-sanitizer company Vi-Jon Inc., said.

The five candidates did express differing ideas on how to address transportation funding needs, ranging from Kinder’s desire to keep toll roads in the discussion to Hanaway’s pledge to advocate for an income tax reduction if an increased gasoline tax is put on the table.

But first, Hanaway said she would “make sure we are spending every dollar we collect efficiently.”

The state’s transportation department’s construction budget is expected to drop to $325 million in 2017, which means the state won’t be able to match available federal money. MoDOT has said it will focus on maintaining 8,000 miles of primary roads such as interstates. The remaining 26,000 miles of state roads were deemed “supplementary” and will see limited routine maintenance, including pothole and signal repair. Several lawmakers tried and failed this year to pass a fuel tax increase.

Voters last year rejected a three-quarters of a cent sales tax increase that would have provided about $5.4 billion over 10 years for roads and bridges as well as ports, railways and public transit.

“Voters have rejected a number of proposals,” Kinder said. “I believe it’s going to take a governor who engages and says to Missourians, we are all in this together.”

Greitens said it came down to a spending problem, rather than a revenue problem, noting Gov. Jay Nixon’s $5.6 million airplane. He wants to create a “culture of accountability,” something he said applies to state employee pay raises as well.

“I believe in giving people raises when they produce results,” Greitens said. “Right now, it’s impossible to say whether or not any individual produces results because there’s no way to measure.”

She lambasted Koster for not prosecuting looters in Ferguson following the shooting death of Michael Brown last year and later added that Republicans needed “a prosecutor to go up against Chris Koster.”

Five-way forum will be held in Jefferson City.

The Missouri Capitol at dusk on May 16, 2014. Photo by Robert Cohen, rcohen@post-dispatch.com