Raasch: The politics of art, or the art of politics? It's in the eye of the beholder
0 comments
Share this
{{featured_button_text}}
1 of 2 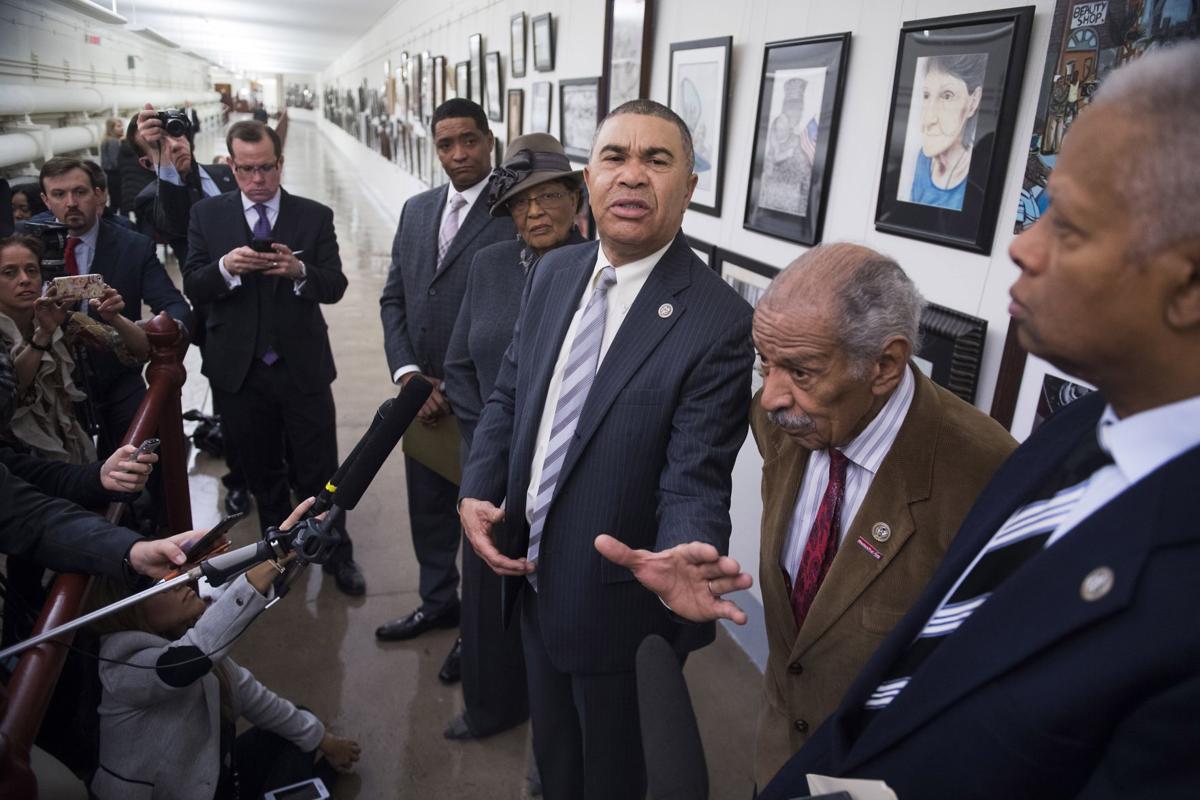 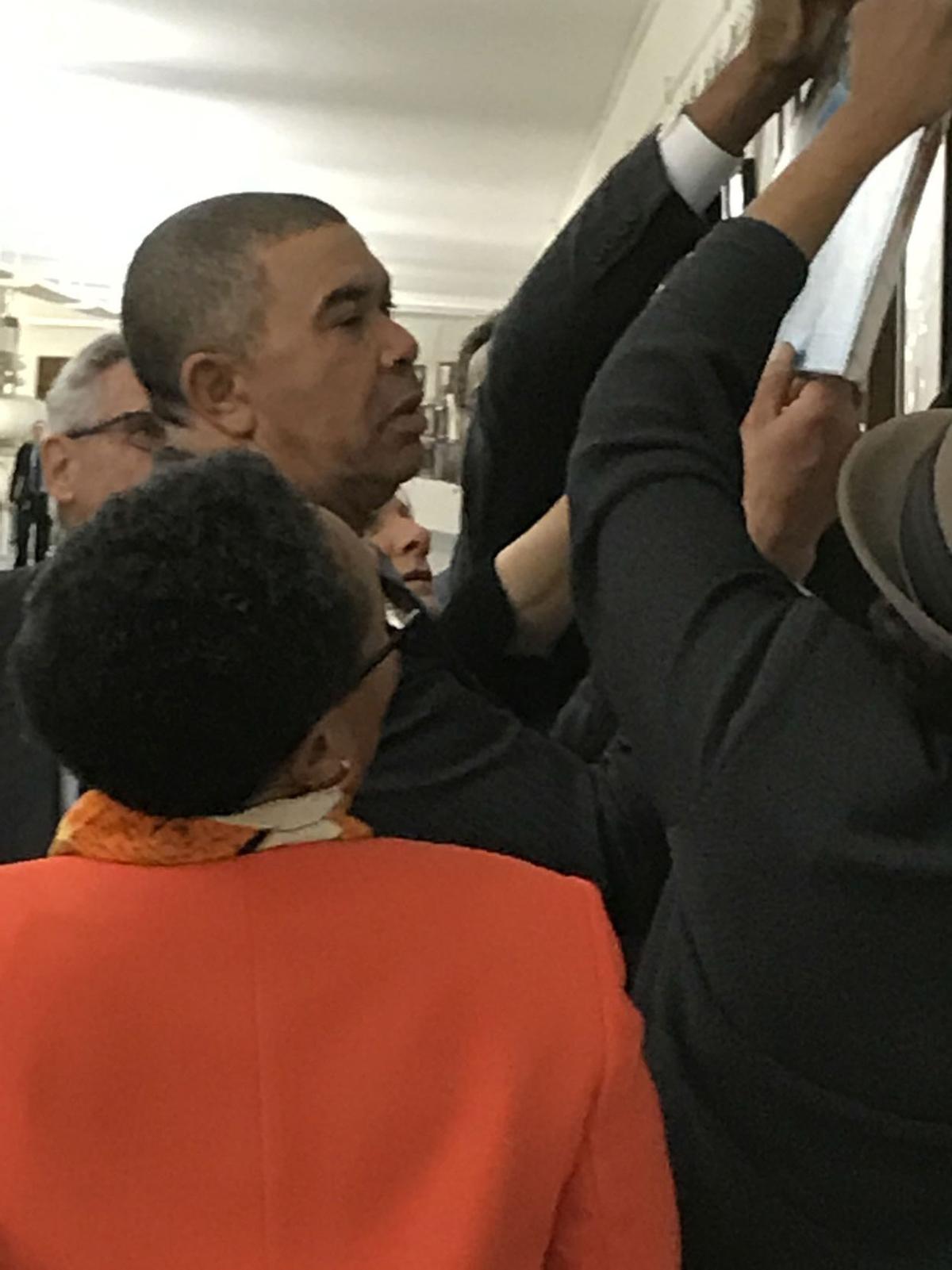 WASHINGTON • Rep. William Lacy Clay was in his private office, door half open, going over remarks he soon would deliver at a news conference about an 18-year-old constituent’s painting.

The painting depicting cops as pig-like animals had been taken down from a Capitol wall by a colleague who saw it as denigrating police. Clay was getting ready to put it back up and had unsuccessfully tried to get Capitol Police to take a complaint against the colleague, Rep. Duncan Hunter, R-Calif.

“Charges, man?” Kasper asked of Clay’s communications director, Steve Engehlardt, whom he was meeting for the first time. “Punk move.”

Retorted Engelhardt: “There’s another word for that: Theft.”

They departed as awkwardly as they met. It was time for the Clay news conference.

As the St. Louis Democrat walked toward the tunnel connecting his office complex with the Capitol, one approaching colleague gave a smile and thumbs-up. A few people glanced disapprovingly at David Pulphus’s colorful canvas in the congressman’s hands.

To Clay, it was a pretty straightforward journey. The depiction of cops as animals, he believes, is a black teenager’s legitimate, constitutionally protected, artistic expression of the frustrations of African-Americans.

“He is doing everything that we encourage young Americans to do to become successful citizens,” Clay said of Pulphus. “His winning entry is a provocative, symbolic representation of the great anger, pain, frustration, and deep deficit in trust for local law enforcement that many young African-Americans feel in their hearts.”

To critics, Pulphus’ painting fuels hatred toward police and keeps smoldering a divisively false “hands up, don’t shoot” narrative out of Ferguson. Some took note that Congress had honored law enforcement the day before, a day in which a female officer was killed by a murder suspect in Orlando, Fla.

“I hope that permanent action is taken to remove this brazen attack on the brave men and women who make up the thin blue line,” said Rep. Doug Lamborn, R-Colo., who later removed the painting after Clay returned it.

Lamborn’s wife is a painter, one of the many ironies of this intersection of art and politics.

Clay and a small entourage of aides approached the long tunnel where the painting was originally displayed. On the walls are expressions from 400 American high-schoolers of all places, backgrounds, childhoods. Some pieces show older Americans with dignity and grace. Some show soldiers with flags and children. Some show buildings or tractors or old shoes on window sills.

The kind of mosaic of the American experience that politicians like to talk about is here, on one wall.

Only one, Pulphus’s “Untitled #1,” has set off a firestorm on social media.

What ensued is culture war at the grassroots.

This is what an 18-year-old’s artistic expression can do in the tinder box of political media.

With tweet-for-tat Donald Trump about to become president, Americans may not soon see it end. On the same day the PaintGate mini-drama played out in the Capitol, social media was still aflame with Trump’s Twitter retort to actress Meryl Streep’s pointed criticism at the Golden Globes.

As Clay approached the spot where the painting was to go, a scrum of reporters was encircling another member of Congress. For a moment, it looked very much like a Rumble in the Tunnel was about to ensue.

It was Hunter in the middle of the media scrum, the congressman who had first removed and left the painting in Clay’s office four days before.

But Clay and Hunter, who describe each other as a “good friend,” did not talk. They hadn’t since the controversy over Pulphus’ painting erupted the week before.

Self-described friends had become vessels of grievance and conflict in the culture wars.

As reporters broke from Hunter to follow Clay, the congressman from St. Louis approached several members of the Congressional Black Caucus who were ready to take turns denouncing censorship and blaming Trump for creating an atmosphere hostile toward the First Amendment.

Clay and his colleagues put “Untitled #1” back where it had hung, without conflict, for six months.

“The First Amendment has been under attack for the last year and a half,” Rep. Hank Johnson, D-Ga., said. “People who practice artistry, like Meryl Streep, have been bullied for exercising their freedom of speech, saying what is on their mind. And now we have a president who routinely tries to muzzle the press, or have the press say or conform to what he wants it to say.”

Cameras rolled, tweets proliferated. Throughout the day, the painting would be taken down multiple times by Republicans, and returned to the wall by Clay.

Rep. Dave Reichert, R-Wash., a former sheriff’s deputy, who is leading House Republicans on the controversy, sent the Architect of the Capitol’s office a letter asking it to review whether the painting violated high-school art competition contest rules aimed at avoiding controversy.

And one more battle between art and politics in the larger culture wars raged on.