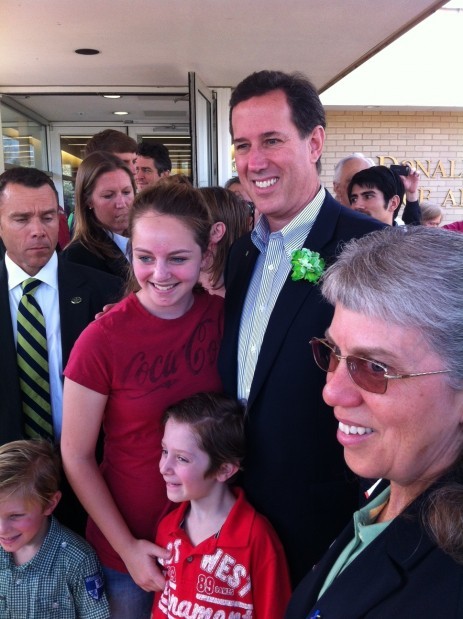 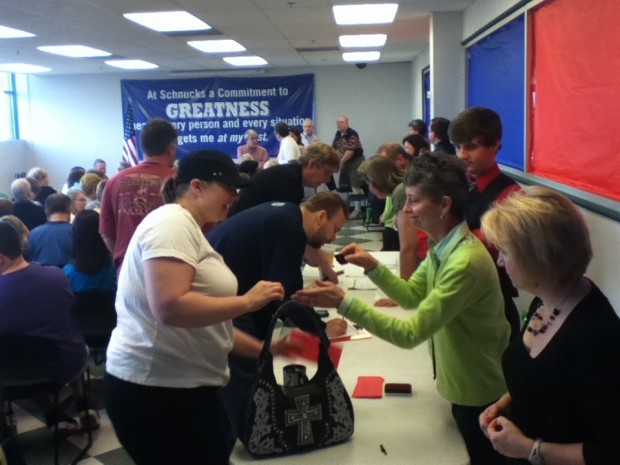 Caucus-goers at the Schnucks at Wildwood Crossing.

Crowds and chaos rattled Missouri’s GOP caucuses on Saturday, threatening to put further scrutiny on a process that was already a national anomaly.

In St. Charles County, which was to have been the biggest single prize of the day, the caucus was shut down before delegates were chosen after a boisterous crowd objected to how the meeting was being run, including an attempted ban on videotaping. Two supporters of presidential hopeful Ron Paul were arrested.

At other caucuses, participants gathered outdoors as the appointed locations turned out to be too small to accommodate crowds or waited for hours as organizers worked through procedural questions.

Even before the day’s events took a rancorous turn, state Republican officials said the winner of the caucus would not be officially known until next month. But with the confusion surrounding St. Charles, and many more delegates available in a pair of caucuses next weekend, the primary picture for Missouri may have only become murkier Saturday.

“It was a joke. It was a complete joke,” said David Nelson of St. Peters, who participated in the St. Charles County caucus.

The state party has not used a caucus to select its choice for presidential preference in 16 years — and the rust showed.

Several caucuses did not start on time as higher than expected turnouts packed the libraries, schools and grocery stores where the events were held.

In Jefferson County, where the caucus started about 25 minutes late so everyone could be registered, Clarence Mason brought a briefcase full of food.

In Ballwin, participants were shut out of an appearance by White House hopeful Rick Santorum because the City Council chambers had reached its 118-person capacity.

“We have had people who left, elderly who could not find a place to sit,” said Craig Borchelt, a Mitt Romney organizer. “There was a guy out here with a cast — he finally sat down on the grass.”

The caucus was moved outside the building to accommodate the crowd.

Participants in Saturday’s caucuses weren’t actually selecting their choice for presidential nominee. They were selecting delegates who will appear at two larger meetings in April and June, who will in turn select delegates to the national convention in Tampa.

Nowhere in the state did the process veer more off course than in St. Charles, a key prize for the Romney, Paul and Santorum campaigns.

Because St. Louis County’s caucuses were divided into 28 township meetings, St. Charles County was slated to assign more delegates than any other single location on Saturday. Jackson County, which includes Kansas City, has more delegates, but, like St. Louis city, asked to hold its caucuses on March 24, so as to avoid a conflict with St. Patrick’s Day.

The caucus in St. Charles County, which was held at Francis Howell North High in St. Peters, was adjourned after police said they were going to “shut us down,” according to Matt Ehlen, the Republican activist who was named chairman of the meeting. Police said 2,500 people showed up, although organizers put the number at less than 1,000.

“For the safety and well being of the attendants at the caucus, we had to adjourn the meeting,” Ehlen said.

However, several individuals at the caucus said much of the consternation revolved around Ehlen himself. Ehlen became chairman after a voice vote, but the head of the county GOP organization failed to recognize any other candidate.

“All of sudden he’s the chairman and the place goes nuts,” said Tim Finch, a Paul supporter from Dardenne Prairie. “This is not how it’s supposed to work.”

Some of Paul’s supporters were also irked by an announced ban on video recording, with organizers asking police to help enforce it.

When the objections reached a fever pitch, the meeting was shut down without any delegates being awarded.

“We started speaking about the Constitution. Where’s our rights? Where are our votes? This is fascism,” said Jim Evans, another Paul supporter.

Buddy Hardin, a Romney leader and longtime behind-the-scenes force in GOP politics in St. Charles County, alleged that Santorum supporters and caucus organizers sought to close the meeting after they realized that Paul and Romney backers had formed an alliance to share the county’s delegates.

“Once they realized they didn’t have a slate and they wouldn’t get any delegates, they tanked it,” Hardin alleged. He said the shutdown was carried out “to avoid a Santorum embarrassment and loss.”

Karen Fesler, state director for the Santorum campaign, denied that. “We didn’t give any instructions to shut it down,” she said.

Eugene Dokes, the county GOP committee chairman who said he’s uncommitted, said organizers had been trying to select a slate of delegates that reflected the relative strength of all three candidates.

One caucus participant accused Paul and Romney supporters of “colluding” to make it impossible to conduct the meeting. Adrian Boyd, an undecided Republican from St. Peters, said both groups were so loud they drowned out the public address system.

“It was descending into an Occupy Wall Street type of an event,” Boyd said.

Brent Stafford of O’Fallon, a county GOP committee member and a leader in Paul’s county campaign, and Kenneth Suitter of St. Charles County were charged with trespassing, a municipal ordinance violation, and released.

Now the pressing question for the state GOP is what will happen to St. Charles’ rich supply of delegates — enough to make the difference in a close race. Party brass began immediately deliberating their next step, which could include holding a new caucus or breaking up the caucus into a series of smaller meetings, as in St. Louis County.

“Today’s events in St Charles were unfortunate, and the meeting was adjourned to protect the safety of all participants,” party chairman David Cole said in a statement. “Moving forward, the State Party plans to reach out to all parties involved. We will come to an agreement to ensure that St Charles County is fully represented throughout the nominating process.”

Rick Santorum's withdrawal was seen as an opportunity by Paul supporters, who made the most of it.

Says he did nothing wrong after caucus, urges prosecutor to drop charge

Any eligible voter who says he or she is a Republican may attend.

Caucus-goers at the Schnucks at Wildwood Crossing.