Missouri state Sen. Bill Eigel, (left), R-Weldon Spring, and Sen. Bob Onder, R-Lake Saint Louis, listen to the speaker on the Senate floor on Friday, May 17, 2019, on the final day of the legislative session in Jefferson City. Photo by Christian Gooden, cgooden@post-dispatch.com 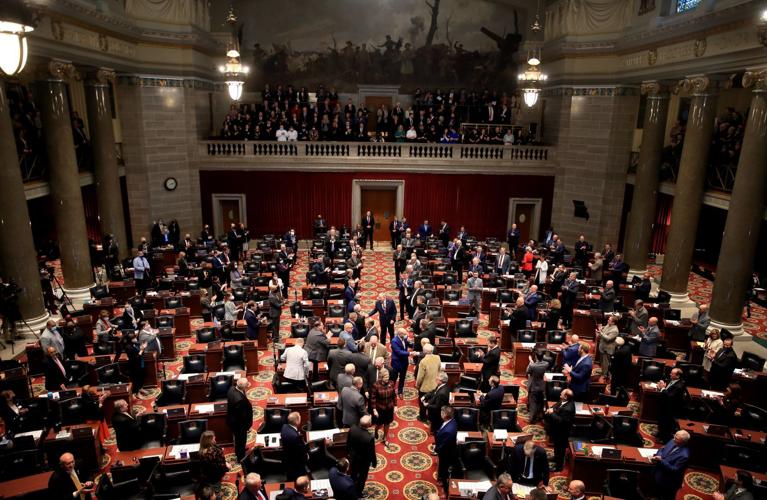 Gov. Mike Parson and lawmakers make their way down the center isle of the House before Parson delivers Missouri's State of the State address at the Missouri Capitol in Jefferson City on Wednesday, Jan. 19, 2022. Photo by David Carson, dcarson@post-dispatch.com

JEFFERSON CITY — Both Democrats and Republicans criticized a proposed congressional map this week, and for the Jefferson County lawmaker who drew up the plan, that’s not necessarily a bad thing.

“It’s a good compromise. I think both sides are unhappy,” state Rep. Dan Shaul, R-Imperial, said Thursday of his map, which will likely result in the status quo of six Republicans and two Democrats from Missouri in the U.S. House.

Shaul, who shepherded the proposal through the state House on a relatively narrow 86-67 vote, said one of his friends “doesn’t love this map, but he thinks it’s a fair map. And that’s people on both sides of the aisle. And is that not what the compromise should be?

“That’s what we’re missing in politics today,” Shaul said. “Let’s just do what’s right for the state of Missouri.”

But as Shaul tries to lock in agreement on his “6-2” map, opponents are digging in. At least one high-profile Republican with no direct role in the process is emerging to pressure GOP lawmakers into passing a “7-1” map that eliminates the Democratic district of U.S. Rep. Emanuel Cleaver, D-Kansas City.

Making a cameo in the debate is former Republican Gov. Eric Greitens, who resigned in 2018 amid investigations surrounding his extramarital affair and campaign finance activities.

Greitens is pressing the issue as he campaigns for U.S. Senate. Hard-line conservatives are framing the debate as a fight against Democratic House Speaker Nancy Pelosi. Sending two Democrats to Washington instead of one will only aid her effort to hold onto the speaker’s gavel, the hard-liners argue.

“Some weak, woke RINOs (Republicans in Name Only) in Jeff City have betrayed every America First patriot in Missouri and in America,” Greitens tweeted on Thursday. “They are trying to give Democrats extra seats in the US Congress.”

“We must send 7 Republicans and 1 Democrat to Washington!” he tweeted at Senate Majority Leader Caleb Rowden, R-Columbia, who fired back, saying Greitens “could have had an actual role in this process as Governor, but he quit on the people of Missouri. Missouri needs fighters...not quitters!”

The former governor has continued his campaign offline.

“He called me and asked” about a 7-1 map, said Sen. Bob Onder, R-Lake Saint Louis. “I said I would do everything in my power as a senator to get a map that sends fewer Nancy Pelosi allies to Congress.”

Kelli Jones, spokeswoman for current Gov. Mike Parson, did not respond to a request for comment on the former governor’s redistricting push. Parson will decide whether to sign or veto any congressional map that makes it out of the Legislature.

The disagreement among Republicans has led to a war of words between some hard-line conservatives and state Senate GOP leadership, a continuation of a long-running feud between the two factions.

Eigel on Twitter accused Rowden of “lying” about the redistricting process.

Rowden has said the map passed out of the House would protect “strong rural voices” and that it is a “conservative” map.

Fanning Kansas City voters out across multiple congressional districts is a greater risk to GOP representation in Washington than a 6-2 map that gives two districts to Democrats, Rowden said.

“I think our 6-2 map is solid, is stable,” Rowden said. “I think there’s really no scenario in which Ann Wagner or any other decent candidate loses the 2nd District in the next decade.

But Eigel said Wagner’s 2nd District would be “very competitive” and that he expects a Democrat to win it by the middle of the decade.

At Thursday’s news conference, Rowden said that for anyone to say “that if we vote for this map we’re voting for Nancy Pelosi as speaker of the House is just insane.”

He continued, “The Republicans are going to be in the majority” after the next election.

“There are people who are saying things for obviously very selfish reasons,” he said.

Rowden wouldn’t say whom he was referring to, but Eigel, in an interview, responded to the GOP leader.

“When he says ... there are folks out there that are pushing a (7-1) map for political and selfish reasons, I take that as an insult to every single Republican in the state of Missouri that just want to see more Republicans in Congress fighting against Joe Biden,” Eigel said.

Sean Nicholson, director of Fair Maps Missouri, said Republicans were debating among themselves how much to gerrymander the state’s congressional districts.

In a state where President Joe Biden won 41% of the vote in 2020, many Democrats say they should be allotted three of the state’s eight seats or that they should at least have a better shot at Wagner’s 2nd District.

“I think it’s an indication of how far gone things are that the argument is ‘do we want a gerrymander or a super-gerrymander?’” Nicholson said. “This is not a map that would come out of a nonpartisan process.”

Democrats withheld their support for the 6-2 map that advanced out of the House this week, as well as an emergency clause that would allow the plan to take effect upon Gov. Mike Parson’s signature, in time for the Aug. 2 primaries.

Democrats might change their vote in the future, if, as expected, the Senate makes changes to the House map and sends it back to the lower chamber for another vote.

House Minority Leader Crystal Quade, D-Springfield, said members of her caucus were concerned the situation didn’t constitute a real emergency, that Democrats weren’t adequately included in the process and that Republicans continue to push bills that Democrats consider detrimental to voters’ rights.

“There’s a possibility that if all of these things are discussed and we’re able to have real dialogue around all of these pieces of concern for us that you can see some of us switch,” Quade said.

Asked if she was worried she was overplaying the Democrats’ hand, she said, “I don’t feel like this is a playing of a hand.

“If they think I am, I don’t really care,” Quade said. “We have a job to do, and just because this is complicated and hard doesn’t mean we’re not going to try.”

Shaul, the top House Republican in charge of redistricting, said he’s tried to keep redistricting “in its own box” when asked about the Democrats’ concerns in regard to other legislation.

“Redistricting should remain in its own box, not be persuaded by other issues, and I think at the end of the day both bodies will vote on redistricting bills as a stand-alone bill with no other strings attached,” he said.

The worst case scenario of losing well over a dozen seats in the U.S. House because of redistricting appears unlikely to happen.

Missouri congressional map makes it to Senate floor, runs into wall of resistance

Conservative hardliners stalled an expected vote on a draft congressional map on Wednesday in an attempt to force negotiations.

Republican hard-liners pushed for the ‘7-1’ map that would send a Democrat packing; some Democrats sought three congressional seats.

‘We keep hearing about this 7-1 map,’ one senator said. ‘We’re not even talking about 7-1 behind closed doors.’

No votes were taken on new congressional maps.

Senate President Dave Schatz said lawmakers are pushing for districts that would benefit their political aspirations.

Missouri state Sen. Bill Eigel, (left), R-Weldon Spring, and Sen. Bob Onder, R-Lake Saint Louis, listen to the speaker on the Senate floor on Friday, May 17, 2019, on the final day of the legislative session in Jefferson City. Photo by Christian Gooden, cgooden@post-dispatch.com

Gov. Mike Parson and lawmakers make their way down the center isle of the House before Parson delivers Missouri's State of the State address at the Missouri Capitol in Jefferson City on Wednesday, Jan. 19, 2022. Photo by David Carson, dcarson@post-dispatch.com