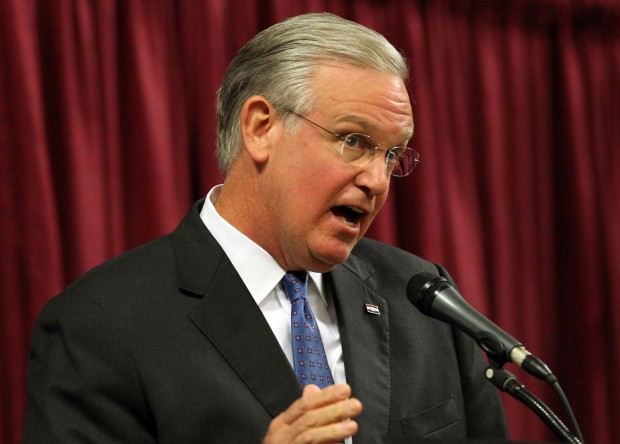 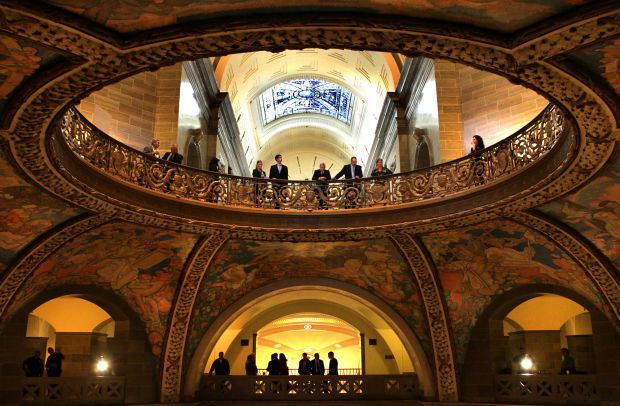 Missouri lawmakers under the capitol rotunda in 2012. Photo by Robert Cohen, rcohen@post-dispatch.com

JEFFERSON CITY • Gov. Jay Nixon has vetoed a broad tax cut measure that Missouri lawmakers hailed as one of their key accomplishments, setting up a showdown this fall.

The Republican-controlled Legislature returns to the Capitol in September with the potential to override the Democratic governor in what could become a contentious session.

“I would say that the chances of us overriding are very strong,” said Rep. T.J. Berry, a Republican from Kearney who sponsored the bill, which would cut taxes for individuals and businesses for the first time in 90 years.

In a long, 10-part veto message Wednesday, Nixon called the legislation an “ill-conceived, fiscally irresponsible experiment that would inject far-reaching uncertainty into our economy, undermine our state’s fiscal health and jeopardize basic funding for education and vital public services.”

The bill would reduce state tax collections by more than $700 million a year when fully implemented in 10 years, according to the Missouri Budget Project, which lobbies for lower- and moderate-income people.

The centerpiece of the bill is a 50 percent tax cut, phased in over five years, for businesses that “pass-through” their income to the owner’s personal return.

Supporters claim it will create other opportunities for growth by putting more money in people’s pockets and helping the state compete with its neighbors, including Kansas and Oklahoma, both of which have recently reduced their income taxes.

“This bill was an opportunity not only to give relief to so many of Missouri’s working families, but also to give our state the tools to attract family-supporting jobs,” said House Speaker Tim Jones, R-Eureka. “This bill would have given Missouri the common sense tax policies we need to stop the bleeding and rebuild our economy.”

“Unlike Jay Nixon, I know that tax dollars belong to taxpayers, and I think we should focus on giving some of these dollars back,” he added.

Opponents, including Nixon, have argued it would force cutbacks in the state budget, including funding for public education.

“Although Missourians expect to have low and predictable taxes, they also want good jobs, quality schools and safe and healthy communities, and they are not willing to gamble these priorities on unproven experiments,” Nixon said Wednesday.

Nixon’s office also drew attention last week to an apparent mistake in the legislation that would have removed a sales tax exemption for prescription drugs, in effect increasing the costs of medicine for millions of Missourians. He used that point in his veto message to say the bill’s drafting was “careless and haphazard.”

“With this provision alone, the General Assembly has voted to impose a $200 million tax increase on Missourians in need of prescription medication,” Nixon said.

Republican lawmakers say that the flaw originated in language that Nixon’s office submitted to the Legislature, and they have argued that there is time to correct that part of the bill before it goes into effect.

Republicans entered the session with a historic advantage: In both the House and Senate, the GOP holds the two-thirds majorities needed to override a veto without any help from Democrats.

With the election of state Rep. Jason Smith, R-Salem, to Missouri’s 8th Congressional District this week, the House still has 109 Republicans — the exact amount needed for a successful override. The Senate has more of a cushion with an extra Republican to spare.

Still, the term-limited governor doesn’t appear to be shying away from any showdowns.

The tax cut bill marks Nixon’s second veto this week. On Monday, the governor nixed legislation dealing with foreign laws, saying the bill could affect Missourians who adopt children from other countries.

In recent weeks, Nixon also has vetoed legislation that would repeal a tax credit for low-income and elderly renters and one that would reinstate local sales taxes on vehicles purchased in other states. The governor’s office is still in the process of reviewing bills, so more vetoes could be coming.

But the tax cut — touted by legislative leaders as a hallmark of the legislative session — could become a rallying point for Republican lawmakers.

GOP legislators say they will assess the override chances when the House majority caucus meets in August.

Berry, the bill sponsor, defended the tax cut plan as modest and fiscally sound because the cuts are phased in slowly over time, and would take place only if state revenue grows by at least $100 million a year.

The bill is a scaled-back compromise, with lawmakers longing for legislation to show they are ready to fight in the ongoing “border war” with Kansas and other neighboring states. During the session, legislators repeatedly expressed concern over Missouri businesses moving across the state line because of lower taxes in neighboring states.

Associated Industries of Missouri and the Missouri Chamber of Commerce and Industry – two of the state’s top business groups — were critical of Nixon’s veto.

“One of the strongest economic development tools that our state could have put to work for our state was taken away today by Gov. Jay Nixon,” said Missouri Chamber president Dan Mehan.

But other groups praised Nixon’s decision.

“When businesses decide where to locate or expand, they look for an educated/skilled workforce, efficient transportation system, and safe, stable communities,” said Amy Blouin, executive director of the nonprofit Missouri Budget Project.

Donald Hall Jr., president and CEO of Hallmark Cards, wrote on behalf of the Civic Council of Greater Kansas City urging the governor to veto the bill because the plan “disproportionately benefits higher-income citizens and adversely impacts middle income citizens.”

Thank you, Gov. Nixon, for vetoing HB 253, which would add a tremendous sales tax burden to the middle class while giving lobbyists and corpor…

Now that the caterwauling by the Missouri Republican leadership has begun over Gov. Nixon’s veto of their ridiculous and dangerous tax experim…

Gov. Nixon stands by his commitment to early childhood

This year, Gov. Jay Nixon announced his support and proposed plan to improve child care and early education in Missouri. It was my honor to be…

Final vetoes set the stage for showdown between Nixon and Legislature

All eyes on the veto session as Nixon sets personal veto record.

Battle over income tax cut in Missouri heats up

Republicans are not sure if they have enough votes to override Gov. Jay Nixon.

Jones wants Koster to say whether Nixon's claims are accurate.

Past contender for GOP presidential nomination will hold public event in Chesterfield Aug. 29.

Guns, taxes on the agenda as Missouri lawmakers return to Capitol

All eyes on the veto session as Nixon sets personal veto record.

The conclusion of the Missouri Legislature's four-and-a-half month session magnified the differences between the governor and Republican-dominated body and is likely to result in more vetoes than usual.

GOP leadership touted other victories, such as an income tax cut that could save Missouri businesses and individuals more than $700 million a year.

Gov. Nixon and Republican lawmakers spar over tax reform bill; Attorney General releases vehicle stops report; the payday loan battle continues; and other items you may have missed this week.

The Missouri Legislature passed the legislation — the first cut to state income taxes on individuals and businesses in 90 years — this week.

Roll call: How legislators voted on the tax reform bill

The Missouri Legislature needs 23 votes in the Senate and 109 votes in the House to override Gov. Jay Nixon’s veto of House Bill 253.

Missouri lawmakers under the capitol rotunda in 2012. Photo by Robert Cohen, rcohen@post-dispatch.com