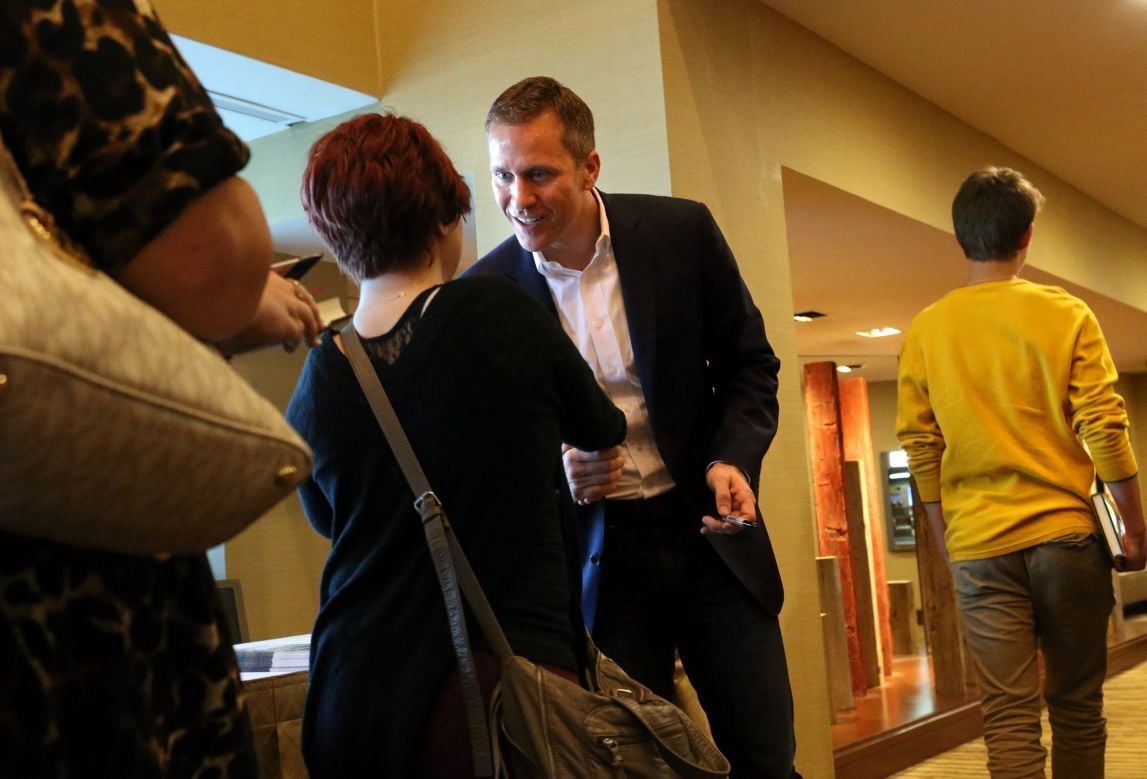 Eric Greitens, candidate for Missouri Governor, greets a supporter as he signs copies of his book, The Warrior's Heart, on Thursday, April 14, 2016, after giving the keynote address at the Kiwanis of Chesterfield's 28th Annual Civic Prayer Breakfast at the Double Tree Hotel. Photo by Christian Gooden, cgooden@post-dispatch.com 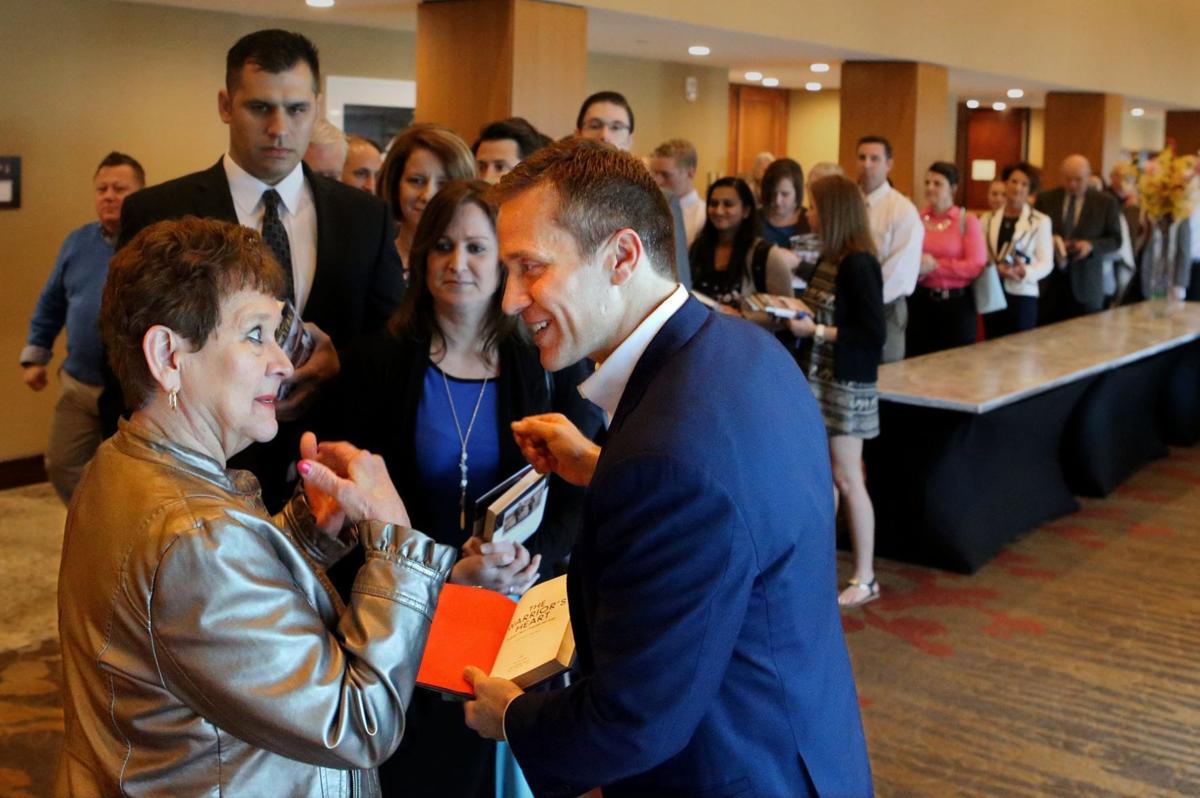 Eric Greitens candidate for Missouri Governor, talks with an attendee as he signs copies of his book, The Warrior's Heart, after giving the keynote address on Thursday, April 14, 2016, at the Kiwanis of Chesterfield's 28th Annual Civic Prayer Breakfast at the Double Tree Hotel in Chesterfield. Photo by Christian Gooden, cgooden@post-dispatch.com

Why would scores of business tycoons from Manhattan to Silicon Valley lavish contributions of $50,000 or $100,000 or even $500,000 on a political novice running in a primary election for governor of a Midwestern state where none of them live?

One clue might rest in the Web address “EricGreitensForPresident.com.”

Eric Greitens reserved it himself. Seven years ago.

Greitens, a Rhodes scholar and former Navy SEAL, is known for bringing high ambition to everything he’s done in his varied career. His first-ever political campaign, for the Republican nomination for Missouri governor, is apparently no different.

Five months before the first votes will be cast in the state’s hotly contested four-way GOP gubernatorial primary, many of Greitens’ supporters — and apparently the candidate himself — already are looking beyond the governor’s mansion in Jefferson City.

“The Republican establishment along with their big donors believe he is presidential material, but first he has to win political office,” said St. Louis University political scientist Ken Warren. “They are not giving to him, they are investing in him.”

One political operative with knowledge of the Greitens campaign put it more bluntly. “There’s been a concerted effort to brand him as the next GOP wunderkind,” said the operative, who spoke on the condition of anonymity because he still works in politics.

The reserved website isn’t the only hint. Greitens’ state campaign in some ways looks like a national one. It employs a national finance chairman who used to hold the same position for the Republican National Committee and who has no previous ties to Missouri.

Greitens’ top donors are a who’s-who of national GOP moneymen from all over America, people more commonly associated with presidential campaigns than with state primaries. More than a dozen were major donors to Jeb Bush’s presidential super PAC this year, a Post-Dispatch analysis of records found.

Some of those backers have been quietly promoting Greitens as a future national contender.

“This was a cultivation. It was all big-money people,” said one source who attended a Greitens campaign reception for monied potential donors in the Connecticut home of professional wrestling magnates Vince and Linda McMahon in January, and who spoke on the condition of anonymity.

“It’s not like they’re looking for a friend over there (in Missouri). They’re looking to make an investment in young, up-and-coming leaders.”

Greitens, 41, an ex-Democrat, St. Louis area native and a Parkway North graduate, never has run for elective office. Aside from his military career, he is an author of best-selling books about character and founder of the Mission Continues, a national philanthropic organization that helps veterans serve their communities.

That’s almost twice as much money as he has raised from within the borders of the state he seeks to lead, which is an unusual dynamic in gubernatorial campaigns. All three of Greitens’ GOP primary opponents — businessman John Brunner, former Missouri House Speaker Catherine Hanaway and Lt. Gov. Peter Kinder — have raised more than 90 percent of their money in-state. Greitens’ in-state take is about 36 percent of his total.

Thanks largely to his out-of-state donors, Greitens’ total in the past year is more than $5.2 million — almost as much as the totals of all three of his GOP primary opponents combined.

Greitens’ campaign points out he has raised more money from Missouri donors than any of his three GOP primary competitors. But the fact that almost two-thirds of his money has come from out of state has raised continuing questions about what it is those distant donors believe they are buying.

“I just think it’s bizarre that somebody is writing six-figure checks to a candidate for governor of a state (when) they’ve never stepped in the state,” said U.S. Sen. Claire McCaskill, D-Mo., discussing Missouri’s lack of campaign finance limits during a recent meeting with the Post-Dispatch editorial board. “Who are these people?”

A Post-Dispatch review of Greitens’ campaign finances found that his biggest out-of-state donors are mostly CEOs, venture capitalists and other businesspeople with histories of national political activism.

Among them is Ronald Weiser, a former U.S. ambassador to Slovakia, former Michigan Republican Party chairman and former finance chairman for the Republican National Committee. Weiser — who has no ties to Missouri — serves as Greitens’ national finance chairman. He has personally donated $50,000 to Greitens and $398,000 more through the real estate management company he founded, McKinley Financial Partnership.

“Some of it has to do with who is doing the asking. Eric is an extraordinary candidate,” said Weiser, when asked why he and other national supporters are putting so much money on a state-level primary. “I don’t think people are supporting someone for governor of Missouri because he might be a presidential candidate some day. That’s a long way to look over the hill.”

Those far-flung donors also include Steve Cohen of Greenwich, Conn., a hedge fund manager with a net worth of more than $12 billion. He contributed $2 million to a super PAC supporting New Jersey Gov. Chris Christie’s former presidential campaign. He has donated $100,000 to Greitens.

There is Bernard Marcus of Atlanta, co-founder of the Home Depot home improvement store chain. He gives millions of dollars to pro-Israeli causes and gave more than $1 million to the Right to Rise super PAC in support of Jeb Bush’s now-defunct presidential campaign. He has donated $75,000 to Greitens.

There is Marlene Ricketts of Omaha, Neb., whose family owns the Chicago Cubs — and who has spearheaded the Our Principles PAC, an anti-Donald Trump super PAC that has gotten under the controversial billionaire’s skin enough to prompt one of his trademark warnings that “they better be careful.” Ricketts donated $25,000 to Greitens in late March.

And there is Frank Kavanaugh, managing director of a California private equity firm, who has given Greitens $125,000 and also has donated to the Mission Continues. He’s part of what Greitens calls a “tremendous amount of overlap” between his philanthropic and political supporters.

“We’ve watched Eric, we’ve known him for a long time, and we just want to see more people like that involved,” said Kavanaugh. He dismissed the suggestion that his support has anything to do with a future Greitens presidential run.

Greitens’ deluge of big out-of-state money was already raising eyebrows before the recent controversy surrounding one of those donors, Michael Goguen. Goguen, a California-based venture capitalist, is Greitens’ single biggest contributor, at $1 million.

In a lawsuit filed in March, a longtime female acquaintance accuses Goguen of “sexual slavery,” which has prompted demands from Greitens’ campaign opponents that he return Goguen’s donations. Greitens has declined, saying he’s waiting for resolution of the civil case.

Sources who have attended Greitens’ out-of-state political events say the campaign and its supporters send subtle but clear messages that he’s headed for bigger things.

One source who attended a New York dinner for Greitens last fall said the host joked to the small gathering about a Greitens presidential run. The source — who spoke on the condition of anonymity because it was a private event — said the “Republican establishment” types in the room were openly vetting Greitens.

“They were poking and prodding him” over the fact that he used to be a Democrat, said the source. Part of the discussion, he said, included comparisons to 2012 GOP presidential nominee Mitt Romney. “With Romney, there was an authenticity problem. (They wanted to know), ‘Do we have that problem here?’”

The source who attended the McMahons’ Connecticut event said Greitens didn’t pitch himself as a future presidential candidate but that others repeatedly touted him as a future national star.

“Linda McMahon got up and said, ‘You keep an eye on this guy, he’s going places.’”

That source and others contacted for this story have no ties to Greitens’ Missouri primary opponents.

Greitens last week shrugged off the suggestion that the campaign or its supporters are touting him as presidential timber, attributing his national funding to other factors. “For a lot of them, they believe that the states are the laboratories of democracy,” Greitens said.

So why, in 2009, did he reserve the website “EricGreitensForPresident.com” — and then renew the reservation last year, just as his Missouri gubernatorial primary campaign was taking shape?

“I had advice from a Navy SEAL friend of mine who’d run for office that cyber-squatting happens,” said Greitens, referring to the practice of reserving a website in someone’s name and then forcing them to pay to get it back. Greitens said his friend told him: “‘If you’re ever going to be in public service, just do this so that you don’t have people who abuse you.’ ... Unfortunately, there are some nasty people out there.”

But if he wasn’t contemplating running for president of the United States, then why would it matter if someone else owed EricGreitensForPresident.com?

“You can serve in lots of different ways,” Greitens said. “There are presidents of universities ... presidents of city councils.”

People who know Greitens, including friend and former Democratic Missouri Gov. Bob Holden, say ambition is a major component of his personality. “If he wasn’t ambitious, he wouldn’t have done all the things he’s done,” said Holden.

As for a future presidential run, “If his supporters are suggesting that,” said Holden, “I’m sure he isn’t trying to dissuade them.”

A comparison of campaign donations to Missouri candidates for governor, and how much came from Missouri sources.

Greitens is the only Republican candidate to oppose SJR 39.

She's angry that Steven Cohen, who was linked to insider trading, was able to launch new hedge fund

A comparison of campaign donations to Missouri candidates for governor, and how much came from Missouri sources.

Eric Greitens, candidate for Missouri Governor, greets a supporter as he signs copies of his book, The Warrior's Heart, on Thursday, April 14, 2016, after giving the keynote address at the Kiwanis of Chesterfield's 28th Annual Civic Prayer Breakfast at the Double Tree Hotel. Photo by Christian Gooden, cgooden@post-dispatch.com

Eric Greitens candidate for Missouri Governor, talks with an attendee as he signs copies of his book, The Warrior's Heart, after giving the keynote address on Thursday, April 14, 2016, at the Kiwanis of Chesterfield's 28th Annual Civic Prayer Breakfast at the Double Tree Hotel in Chesterfield. Photo by Christian Gooden, cgooden@post-dispatch.com