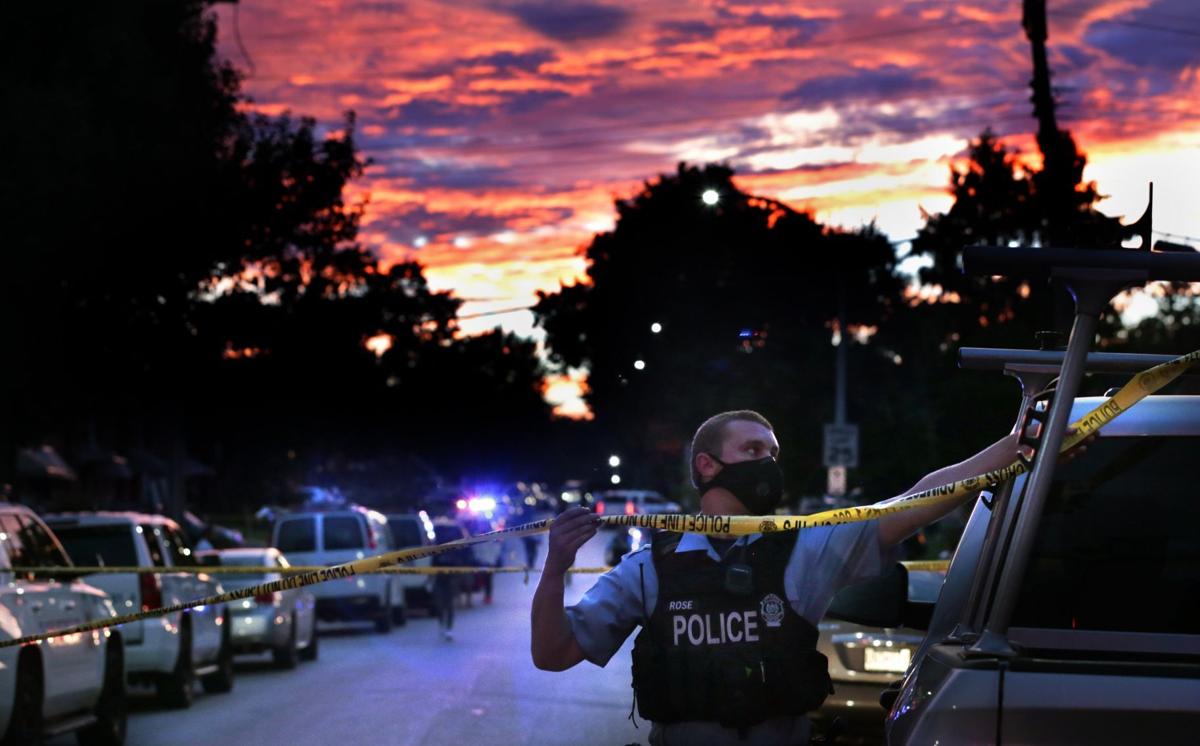 A St. Louis police officer strings crime scene tape as the sun sets in the 1500 block of Switzer Avenue, west of Riverview, where two men were shot to death and a third injured in the North Pointe neighborhood on Monday, July 27, 2020. Photo by Robert Cohen, rcohen@post-dispatch.com 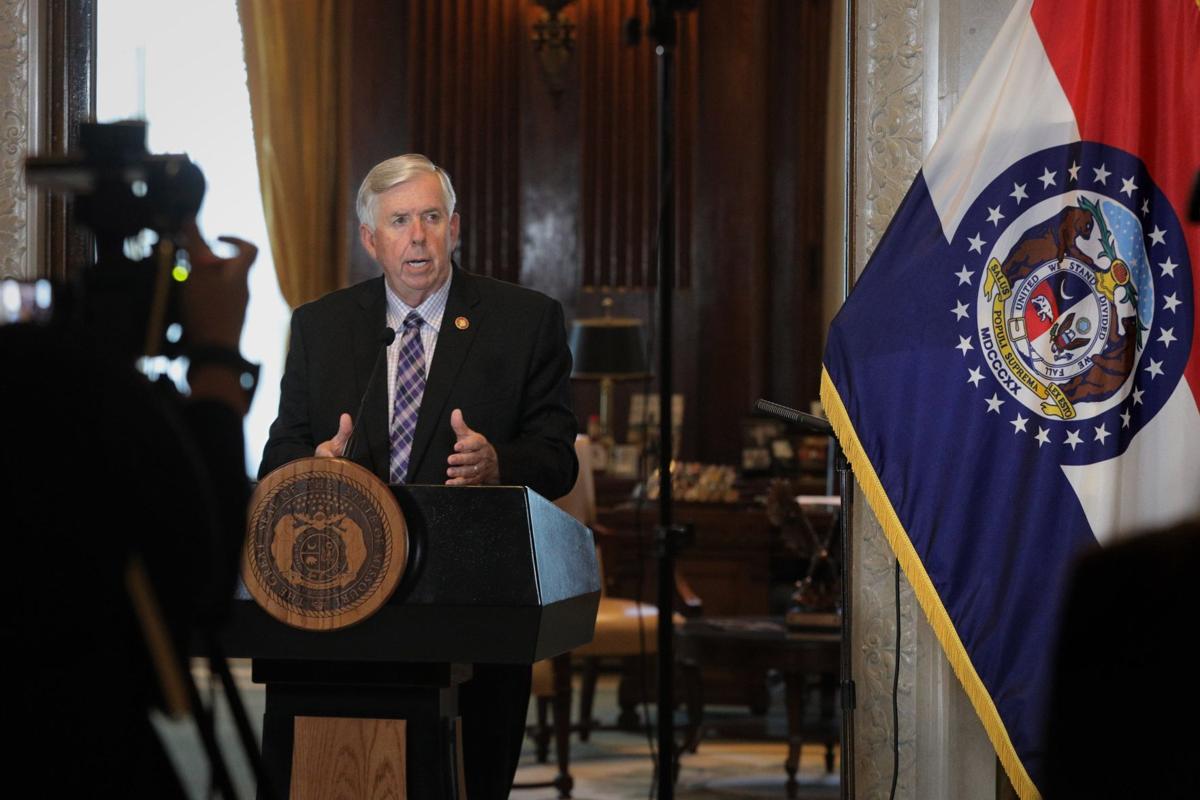 ST. LOUIS — Gov. Mike Parson on Monday signed a new state law exempting St. Louis police and firefighters from the city’s longstanding residency requirement in the first stage of a potential two-part repeal of the rule that includes a citywide vote in November.

Then, at the Nov. 3 election, St. Louis voters will decide on a proposed city charter amendment getting rid of the residency rule altogether for all 6,169 civil service employees — not just those in the police and fire departments.

“We would like to have some finality on this,” said Jeff Roorda, business manager for the St. Louis Police Officers Association, explaining why both measures are important to the group’s membership.

Under the new state law, affected workers employed prior to the 2023 expiration date will be able to live outside the city but the city would be allowed to reimpose the residency rule for new hires after that. Passage of the charter amendment would remove that possibility.

Although Parson signed the residency bill Monday, he will hold a ceremonial signing Wednesday afternoon at the police officers association office in St. Louis. Also Monday, the governor signed a separate law, creating a witness protection fund. The two bills were the only laws passed during a recently concluded special session on crime. (Update: The ceremonial bill signing was canceled after the governor and his wife tested positive on Wednesday for COVID-19.)

The police union and other supporters of ending the residency requirement, including Mayor Lyda Krewson, say repeal is needed to widen the pool of applicants for police slots and other jobs with a persistently high level of vacancies.

The police department said Monday that it was 129 officers short of its authorized strength of 1,349. Among other hard-to-fill job slots in recent years have been paramedics and tree trimmers, city officials say. Overall, 972 civil service positions, or nearly 16%, were vacant.

“As the population declines, we’re going to have to have some way of getting (more) workers,” said Alderman Joe Vaccaro, D-23rd Ward, who sponsored the Board of Aldermen bill that put the charter amendment on the ballot.

But opponents of both the city amendment and state measure, passed earlier this month by the Legislature, say mandating that the city’s own workers live in the city makes it more likely they’ll understand the people and areas they’re serving.

One opponent, Alderman Megan Green, said residency is especially needed for police amid the current nationwide push for changes in law enforcement following the death of George Floyd, a Black man, in Minneapolis police custody.

“Cities and activists are saying it’s important we have police connected to the communities,” said Green, D-15th Ward.

She said if voters reject the charter amendment, which requires a 60% majority, it’s possible that a lawsuit will be filed challenging the state measure.

“It leaves open the ability for litigation if voters are doing something different than what the General Assembly has done,” Green said.

Roorda and Vaccaro said they don’t expect the lifting of the residency rule on its own to solve the shortage of officers but that it will help. However, Officer Michelle Woodling, a police department spokeswoman, said the rule “has been the number one impediment to recruiting.”

Krewson, in a social media appearance last week, said St. Louis County is “a target recruiting area for us” for police. Under the state bill, new recruits and current officers who live in the suburbs will have to live within an hour of their jobs.

This isn’t the first relaxation of residency restrictions for police and firefighters.

Since 2005, St. Louis police on the job at least seven years have had the option of living outside the city within an hour of work.

Firefighters with seven years’ service won the same authority in 2010 from the Legislature. But their exemption had been set to expire in 2022. A state law allowed them to move outside the city as long as the city schools weren’t fully accredited or for five years after the district regained accreditation, which happened in 2017.

The law also lists registered nurses as public safety workers that will be exempt from the residency rule. City Personnel Director Rick Frank said it was his opinion that the 12 nurses in the city health department fit that description.

Also freed from the residency requirement by the state law are 164 sheriff’s deputies under Sheriff Vernon Betts.

Betts heads one of the city’s county-type offices that aren’t bound by the city charter’s residency requirement and can set their own policy. He currently requires residency with a few exceptions, a spokesman said.

Roorda and Demetris Alfred, president of the city firefighters union, both said they didn’t expect a large number of current city workers in their organizations to quickly move out of the city.

“I don’t think there will be a mass exodus,” Roorda said.

Two years ago, Krewson got the city Civil Service Commission to commit to issuing residency rule waivers for up to 50 police recruits. But few applied and just one was granted.

Roorda contended that the waiver was never a viable alternative because recruits getting one would have to get it renewed each year, causing uncertainty.

The city charter has had a residency requirement since 1914 but the city had residency rules for some positions even before that. The issue didn’t become controversial until the 1950s when more and more city residents began moving to the suburbs.

The residency requirement for police began in the early 1970s when the old state-appointed police board began requiring new officers to live in the city amid efforts by aldermen to force the issue.

In addition to the police and fire employees who now don’t have to live in the city, more than 650 workers who aren’t part of the city civil service system already can reside outside St. Louis if they choose.

Among those are employees of the circuit attorney, the city treasurer, circuit court and circuit clerk.

A St. Louis police officer strings crime scene tape as the sun sets in the 1500 block of Switzer Avenue, west of Riverview, where two men were shot to death and a third injured in the North Pointe neighborhood on Monday, July 27, 2020. Photo by Robert Cohen, rcohen@post-dispatch.com