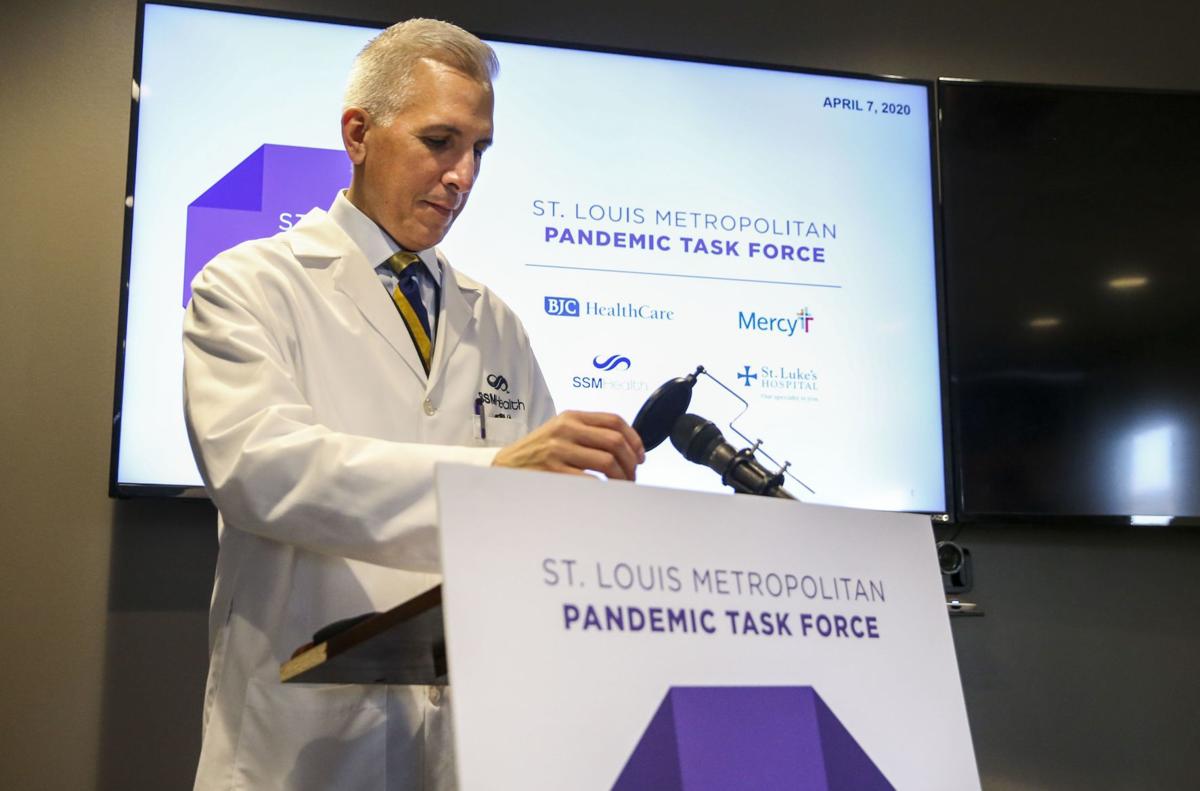 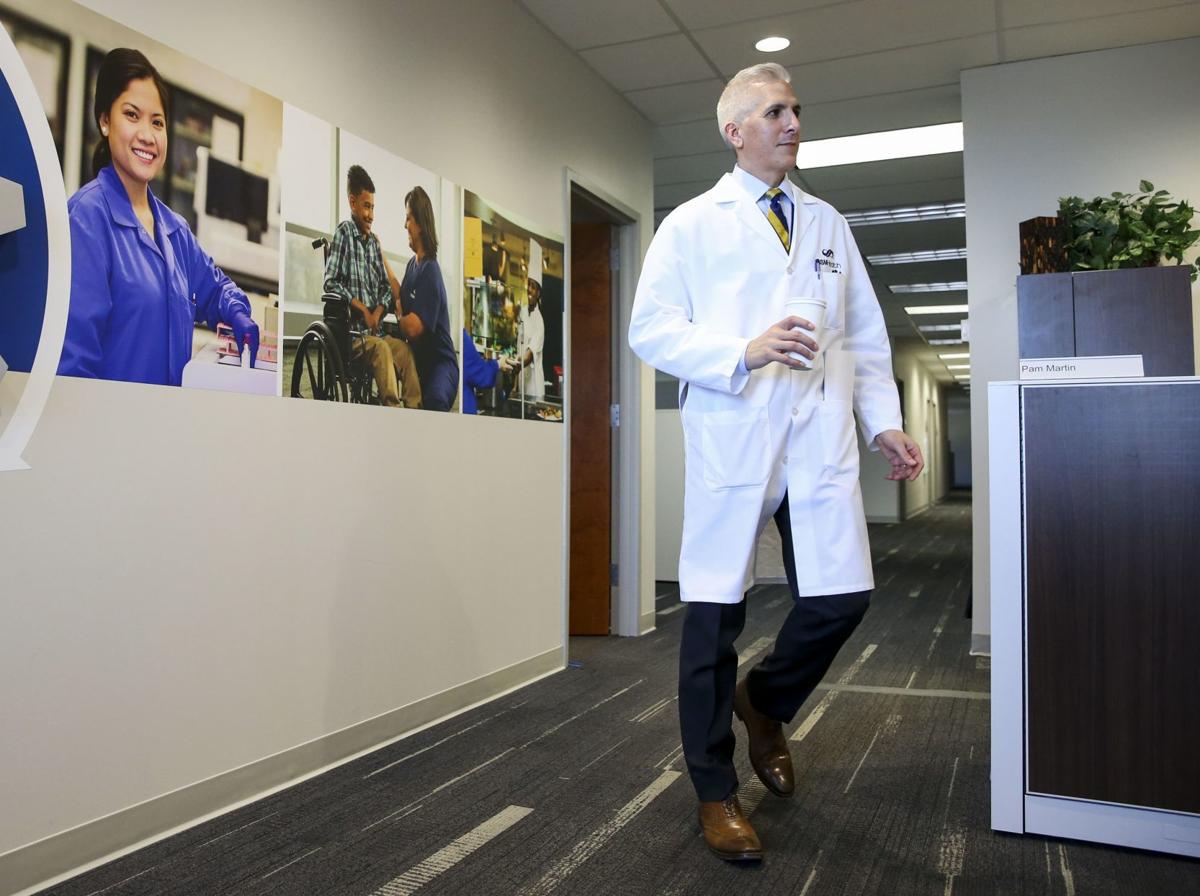 Dr. Alexander Garza, Chief Medical Officer with SSM Health, walks through the halls of the SSM corporate headquarters in St. Louis County after delivering a daily briefing for the St. Louis Metropolitan Pandemic Task Force on Tuesday, April 07, 2020. The daily briefings are streamed on the task force's facebook page for everyone to watch. (Photo by Colter Peterson, cpeterson@post-dispatch.com) 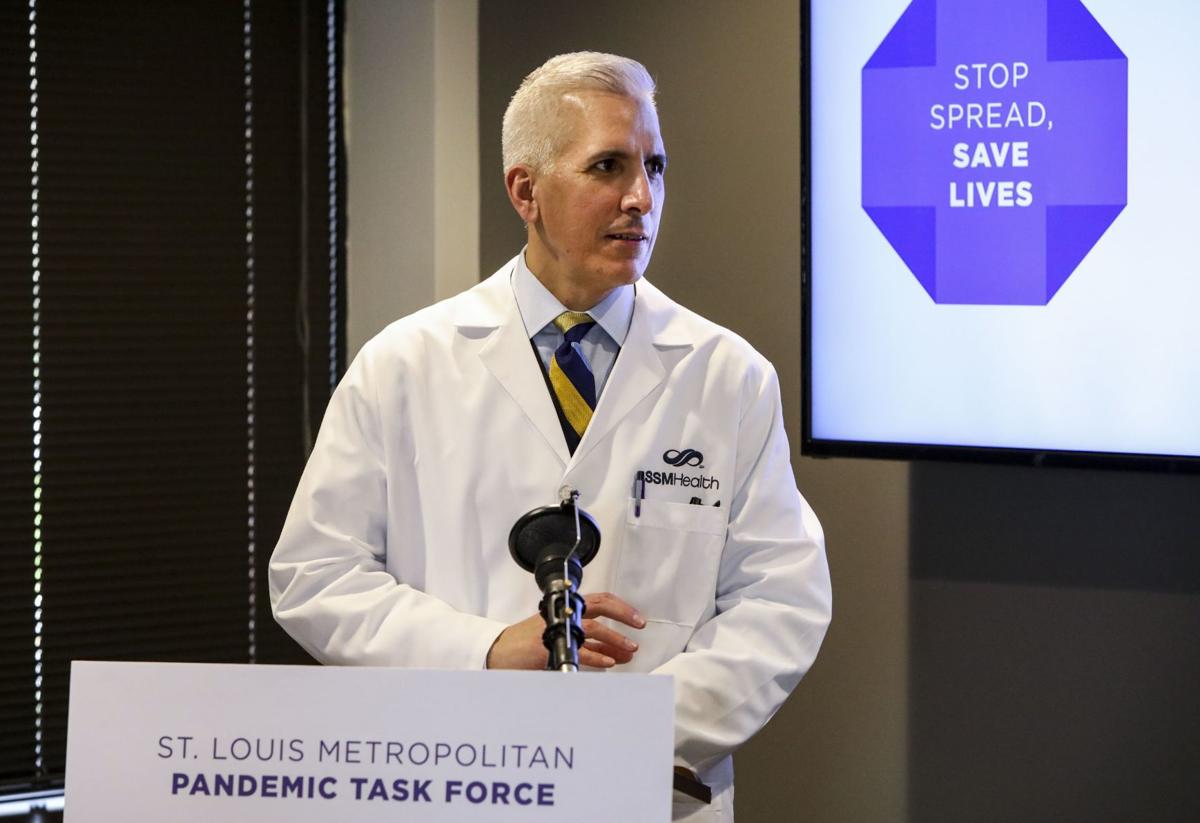 Dr. Alexander Garza, Chief Medical Officer with SSM Health, prepares to provide a daily briefing for the St. Louis Metropolitan Pandemic Task Force at the SSM corporate headquarters in St. Louis County on Tuesday, April 07, 2020. The daily briefings are streamed on the task force's facebook page for everyone to watch. (Photo by Colter Peterson, cpeterson@post-dispatch.com) 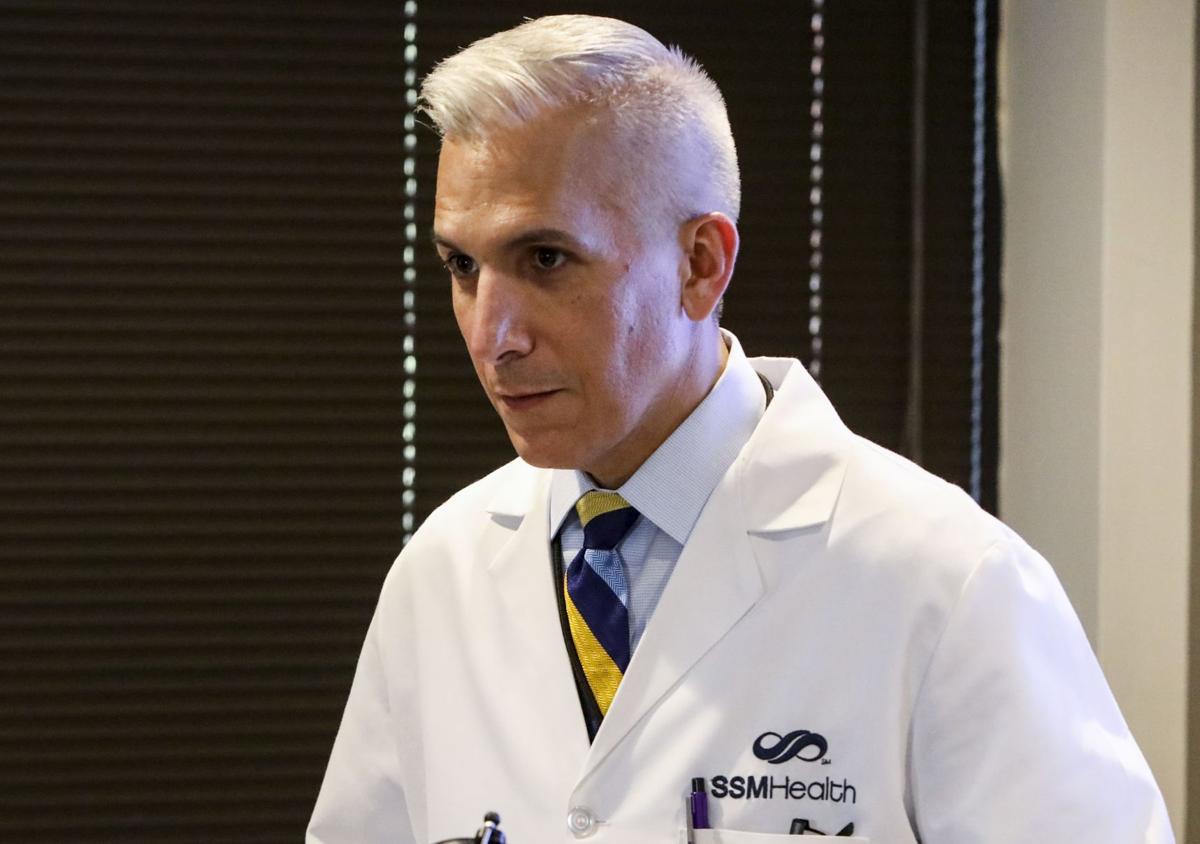 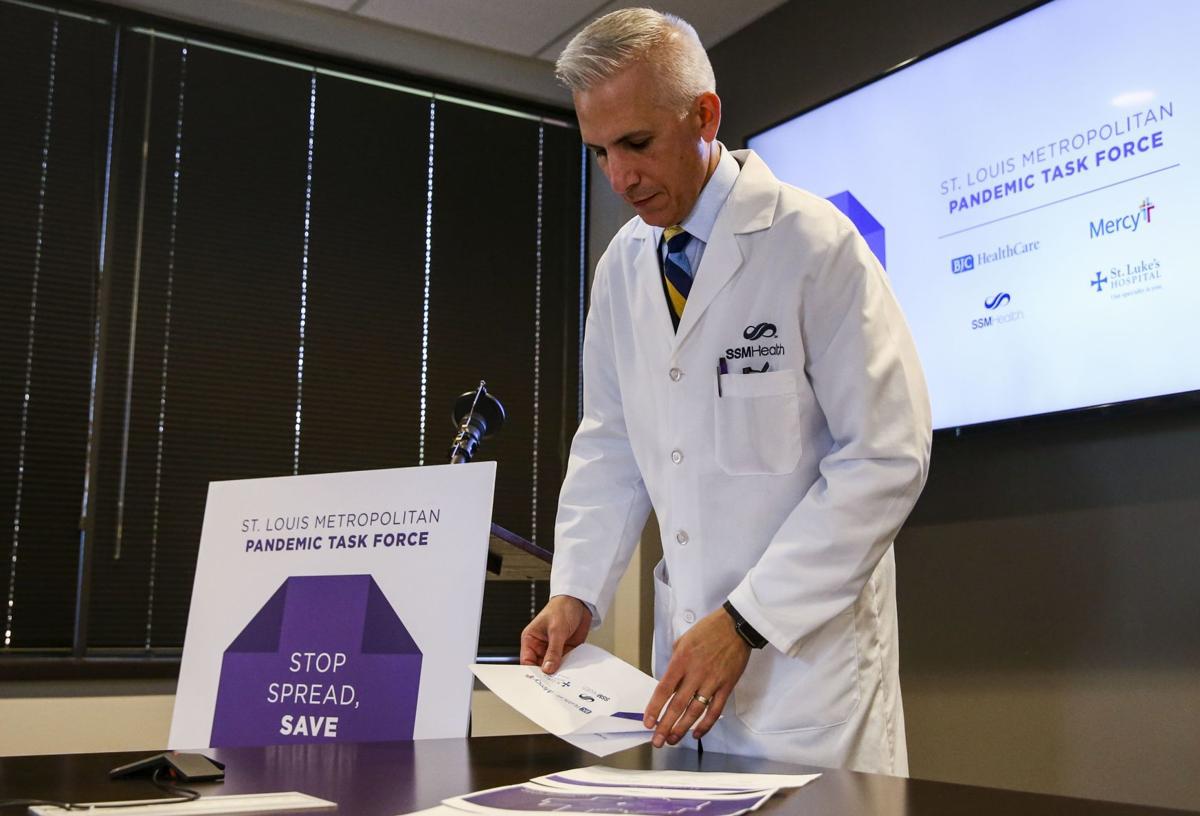 ST. LOUIS — A few months before the new coronavirus came to St. Louis, Dr. Alexander Garza wrote in an article that a pandemic would be similar to a different type of epidemic: gun violence.

In an article for the November-December edition of Health Progress, the journal of the Catholic Health Association, Garza, chief medical officer for SSM Health, asserted that germs and guns “affect the poor and vulnerable disproportionately and can span from small, intense periods, such as a case of meningitis or sepsis, to full-blown disasters, such as the H1N1 pandemic or recent Ebola virus outbreaks.”

Now Garza, 52, is finishing his first week as incident commander of the St. Louis Metropolitan Pandemic Task Force, consisting of the area’s four major health care systems: SSM, Mercy, BJC HealthCare and St. Luke’s Hospital. And, as first explored in the St. Louis American, he is seeing his words writ large across St. Louis, where data shows the virus is affecting African Americans at four times the rate of white people.

Over recent days, Garza’s daily briefings with the media have helped frame the pandemic in a way that exposes a larger problem: the fragile health of the underserved. His calm and succinct messages to the public, streamed on Facebook and covered by local media, have driven home the message that hospitals can’t stop people from getting sick. They can only treat sick people. Ending the suffering is in everyone’s hands.

It’s not just clinical talk from a health care executive. The perspective grew out of weaving ambulances through traffic to emergencies. It came from rebuilding hospitals torn apart in war, creating coalitions of people who are risking their own lives to help. It came from immersion in that suffering.

Garza, from Maryland Heights, is a 1985 graduate of St. Thomas Aquinas High School. After graduating from the University of Missouri-Kansas City with a degree in biology and chemistry, Garza worked as an EMT and paramedic for the Metropolitan Ambulance Services Trust in Kansas City.

A 1991 story in the Kansas City Star Magazine profiled a day in the life of 23-year-old Garza at the wheel of an ambulance — addicted to the job, in his own words — crisscrossing the city to stabilize the sick and injured and get them to a hospital. The story found Garza laying on the horn on his way to a call, muttering for cars to get out of the way. He and his partner arrived at a scene where a woman, smelling of alcohol, had collapsed and hit her head. A friend told them she had smoked crack.

The woman came to and began screaming incoherently. Garza’s partner calmed her as her three children watched. After they got her on a backboard, the woman began to thrash, screaming: “What’s wrong with me? I’m afraid!”

The story said: “Garza glanced back at the children. For a moment, his eyes seemed haunted. ‘If more doctors saw what we see every day, medicine would be practiced differently,’ he said.”

Garza would write years later that he got “quite a bit of flak” from emergency physicians about the magazine quote. “I had to explain that they didn’t see what we saw out in the community.”

Garza went to the University of Missouri School of Medicine. He would write years later that while he was working as an attending emergency physician, paramedics brought two children to the ER who had been shot in the head and had nonsurvivable wounds.

He recalled the surgery resident’s apparent ambivalence as he performed procedures “as if using their bodies for training. It was grossly disrespectful to them as human beings.” And then he left the trauma room to speak to their mother, and found her inebriated.

“I couldn’t sleep when I got home that night just thinking about what had just happened.”

While an emergency medicine resident in 1997, he joined the U.S. Army Reserves and served as a battalion surgeon and public health team chief. He deployed to Iraq in 2003 and was awarded the Bronze Star and a Combat Action Badge.

After Saddam Hussein’s death in 2003, Garza was responsible for rebuilding Iraq’s health sector. In an interview, he recalled assembling doctors to try to appoint a new health director. About five candidates were interested. The next day, it was down to two people. The others had received death threats. Garza said he had a choice: allow the election or just let the U.S. pick one as governing authority.

“I allowed for it to proceed,” he said. “And, to my delight, they chose the person who is sort of not the bad guy. And then I began working with him exclusively on how to rebuild the health care sector, and we formed a wonderful partnership and were able to get a lot of things done. So, how does that relate to this? It’s understanding culture. Everybody comes to things from a different lens, and you have to understand where they’re coming from. But you also have to have faith in people as well to do the right things.”

Garza was associate medical director and then medical director for EMS in Kansas City from 1999 to 2006. He spent a year as New Mexico’s EMS director before becoming director of military programs at the ER One Institute at the Washington Hospital Center in Washington.

In 2009, President Barack Obama appointed Garza as assistant secretary to Homeland Security Secretary Janet Napolitano. He immediately went to work on the nation’s response to the H1N1 flu pandemic, which killed more than 12,000 people. After four years, he came back to St. Louis with his wife and three sons and became associate dean for public health practice and an associate professor of epidemiology at St. Louis University College of Public Health and Social Justice.

Garza joined SSM in 2016 as vice president for medical affairs, and he became chief medical officer in 2018.

He’s been active in St. Louis County government, accepting appointments from County Executive Sam Page to serve on the county’s Justice Services Advisory Board to advise jail officials after a series of inmate deaths. The board has, at times, had to battle the jail for access.

That extends to last week, after the Post-Dispatch reported the jail had at least two employees test positive for COVID-19 and has upset corrections officers and other employees by failing to tell them. Mary Zabawa Taylor, an advisory board member and patient safety advocate who has been an outspoken critic of secrecy in the department, said Garza has been involved in recent email discussions about the situation at the jail.

Taylor said she and Garza “speak the same language” when it comes to improving health systems. “I often find that I make a passionate speech and then he will say something in support of it, bringing his deep knowledge of data and how it affects performance. It’s always in a careful and thoughtful way, which is appropriate because I’m a little bit on the edge. He’s just a reasonable, wonderful person.”

Garza said in an interview that in December he had his eye on reports of a pneumonia in China.

“Every once in a while you will see cases of avian influenza pop up in the Far East, but … it’s usually two people and then it snuffs out because it’s not transmissible from human to human.”

By January, he said, his SSM colleagues were gathering more information about the disease, and that led to conversations with his counterparts at Mercy and BJC. That led to sharing of data and protocols. Ending elective surgeries. Pooling protective equipment.

With each governmental jurisdiction operating independently, the hospitals decided to align, with Garza at the head.

I am so proud and so thankful to be in St. Louis. We are a world-class community working together.

Dr. Alexander Garza, Chief Medical Officer with SSM Health, walks through the halls of the SSM corporate headquarters in St. Louis County after delivering a daily briefing for the St. Louis Metropolitan Pandemic Task Force on Tuesday, April 07, 2020. The daily briefings are streamed on the task force's facebook page for everyone to watch. (Photo by Colter Peterson, cpeterson@post-dispatch.com)

Dr. Alexander Garza, Chief Medical Officer with SSM Health, prepares to provide a daily briefing for the St. Louis Metropolitan Pandemic Task Force at the SSM corporate headquarters in St. Louis County on Tuesday, April 07, 2020. The daily briefings are streamed on the task force's facebook page for everyone to watch. (Photo by Colter Peterson, cpeterson@post-dispatch.com)