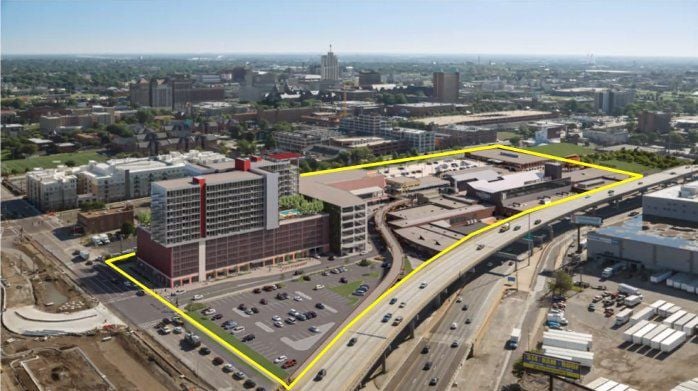 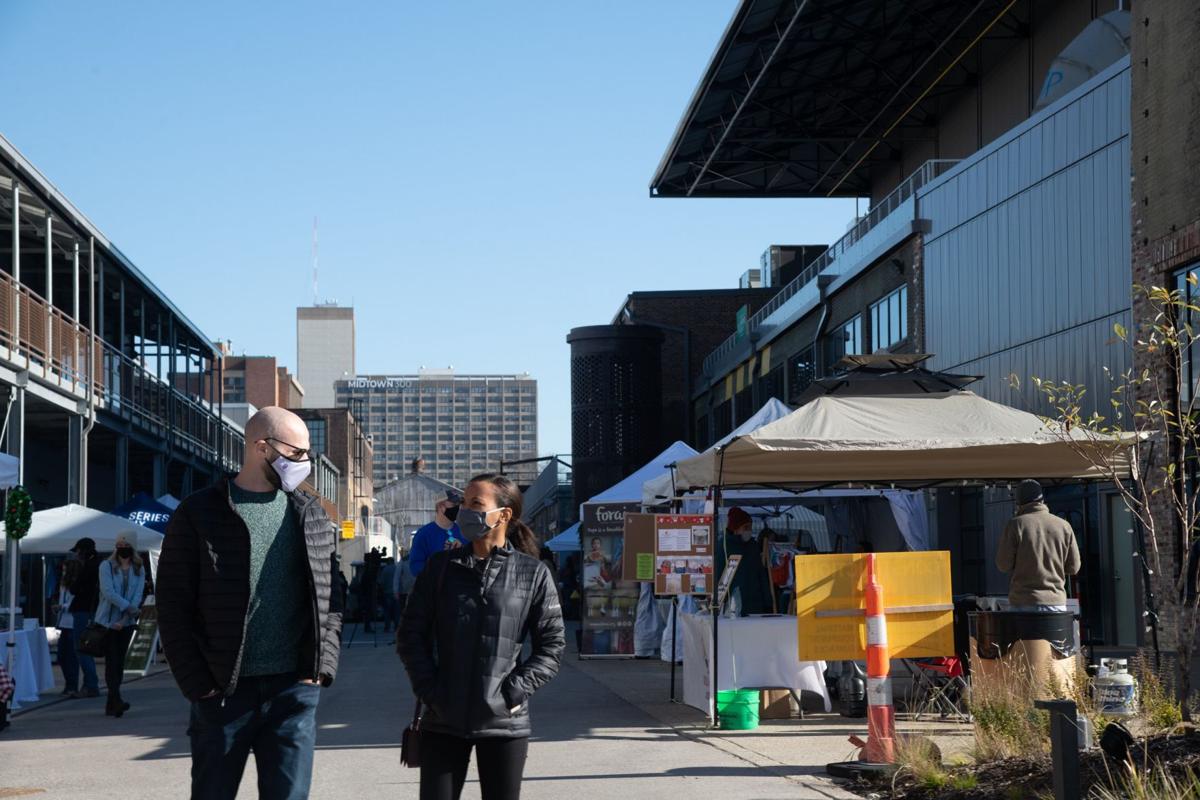 Ryan Tebeau (left) and Kamilah Rashid, both of St. Louis, chat while they walk along shopping booths at City Foundry STL during WintrMarkt in St. Louis on Saturday, Nov. 28, 2020.  (Jon Gitchoff photo)

ST. LOUIS — In another sign that new leadership at City Hall is pushing back on subsidies, a city commission that vets development incentives on Wednesday again delayed a public hearing on the next phase of the City Foundry project amid ongoing negotiations with Mayor Tishaura Jones’ administration.

It’s the latest indication that a shift in the city’s political power structure following the April election is reverberating through the development community.

Wednesday morning’s St. Louis Tax Increment Financing Commission meeting marked the second time the board punted on a public hearing for the high-profile Midtown development, which is seeking an amendment to a development incentive agreement approved years ago. The commission already pushed back a hearing scheduled for April 28, shortly after Jones and the ward’s new alderman, Tina Pihl, were sworn in.

“Why are we continuing this?” TIF Commission vice chair Phillip Klevorn asked city staff Wednesday morning after the commission indicated it would continue the meeting until June 2. “Last month, I was asked to block out two hours of my schedule and I get here and it lasts 10 minutes. It’s happening again. This is not an efficient use of time. So what’s the game plan and the end game here?”

Dale Ruthsatz, director of commercial development with the St. Louis Development Corporation, said staff didn’t know until the “eleventh hour that we needed to make this change.”

“There’s a lot of new individuals as part of the whole process, including a new alderman and a new mayor,” Ruthsatz said. “I think it’s just taking a little bit to get everything together and organized.”

A spokesman for the SLDC confirmed that it still was in “discussions” on the TIF.

Nick Dunne, a spokesman for Jones, said in a text that the mayor’s office was “keeping its promise to be a more active partner in negotiations around development incentives,” including at City Foundry.

Earlier this month, Jones vetoed two bills authorizing property tax abatements, another development incentive, in the central corridor, arguing they were too generous for that part of the city. She urged those developers to “come back to the table” to negotiate.

In addition to the mayor, City Foundry developer Steve Smith also has a new alderman with whom to work. Under St. Louis’ system, aldermanic support where a project is proposed is essential to winning zoning, incentives and other development legislation. Pihl was one of four new aldermen from the progressive wing of the Democratic party who won election last month, shifting the balance of power on the 28-member board toward a bloc more critical of development incentives.

Pihl succeeded longtime alderman Joe Roddy, who shepherded countless development incentive bills through the board during his 30-plus years representing a ward that in recent years has seen among the most redevelopment activity in the city.

SLDC Director Otis Williams said the continuation of the April 28 hearing was a “joint decision between SLDC and the alderman.” Pihl said Wednesday she still was “looking at this project” and “looking at the numbers.” She’s still getting up to speed on the project as well as countless other issues as a new alderman, she added.

Smith has spent the last five years working to rehab the old Federal Mogul industrial site at Forest Park and Vandeventer avenues into an entertainment and office complex anchored by a food hall. Its opening was delayed by the pandemic, but it recently has begun hosting concerts and plans a full opening later this year.

Back in 2017 and 2018, the St. Louis Board of Aldermen approved a TIF incentive package worth up to $36 million, with about $19 million of that allocated to a nearly complete first phase initially valued at some $130 million. About $17 million in TIF, which allows developers to use the new sales and property taxes their projects generate for construction costs, was allocated for a second phase.

The request before the TIF Commission does not seek more than the $17 million TIF already approved for the second phase. However, the TIF still needs commission review and passage by the Board of Aldermen because the City Foundry plans now call for a 282-unit apartment building rather than a 100,000-square-foot office building originally planned for the second phase.

The eight-story apartment building and other changes boost the second phase investment to $138 million from $97 million, according to a city report on the project.

It wasn’t clear what was still being negotiated.

“Investors invest where the municipalities are receptive and where they can get a fair return on investment,” Williams, the SLDC director said during the Wednesday meeting. “I think where we are is trying to balance that. If you were about to buy something, would you buy from someone who is antagonistic?”

TIF Commissioner Christina Bennett suggested during the meeting that the project could be “subsidizing one of our major universities.”

“That is absolutely not true,” Williams retorted.

In an interview, Bennett clarified that she suspected many of apartment building’s renters would be students at nearby St. Louis University. SLU in 2019 purchased the site where the City Foundry apartment building is planned, and Smith has worked with the university on past projects.

A spokesman for SLU said the university doesn’t plan to hold on to the property and doesn’t manage off-campus apartments.

A spokeswoman for Smith’s development firm, New + Found, said the “apartment complex is designed for young professionals seeking an active lifestyle. Though it is not student housing, we would welcome members of the St. Louis University and Washington University communities into ours.”

Aldermen approved $17 million in tax increment financing for the second phase of the City Foundry development in 2018. Now, a new mayor and new alderman are pushing for changes.

For the second time in two weeks, Alderman Tina Pihl has asked to delay a meeting on tax incentives.

Negotiations with the new aldermen and mayoral administration slowed the project’s approval, but the parties say they now have a ‘model for equitable development.’

Developer Steve Smith is turning his attention to other projects. All that work, he said, "keeps me healthy and fresh."

SLPS President Dorothy Rohde-Collins: ‘I do see this as a real turning point as far as the role that the school district and the school board play.’

Ryan Tebeau (left) and Kamilah Rashid, both of St. Louis, chat while they walk along shopping booths at City Foundry STL during WintrMarkt in St. Louis on Saturday, Nov. 28, 2020.  (Jon Gitchoff photo)