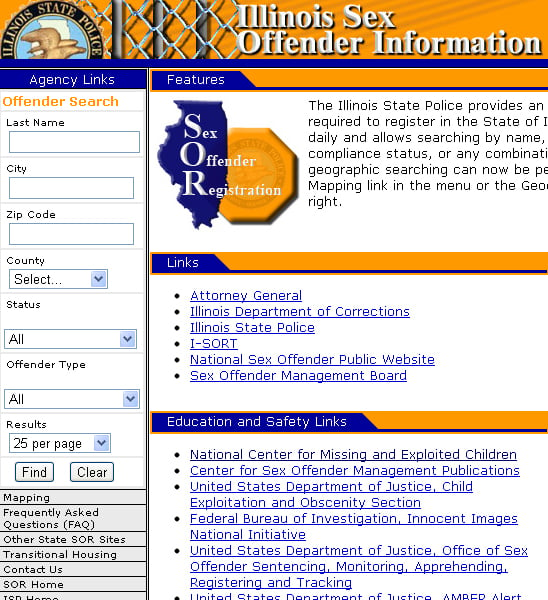 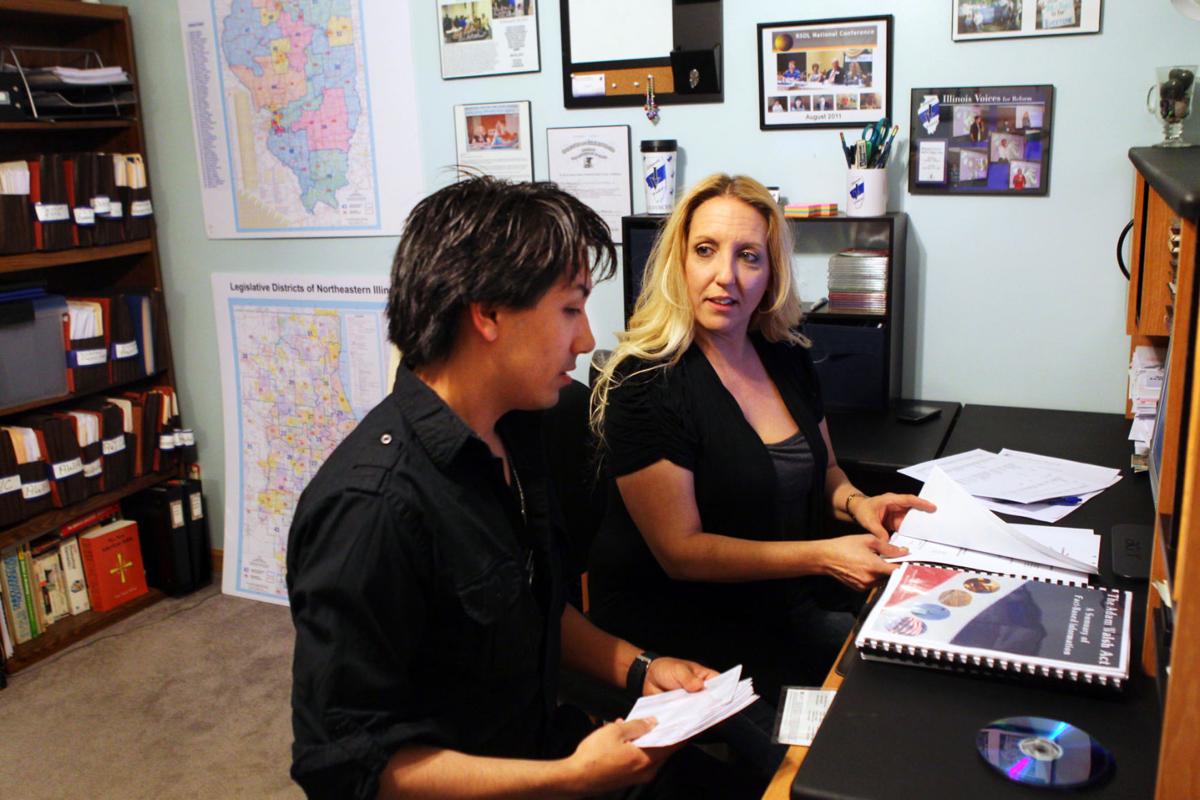 Tonia Maloney and her son Ryan Townsend, 24, work together on notebooks they have made to campaign against the federal Adam Walsh Act on Friday, April 13, 2012. Photo by Emily Rasinski, erasinksi@post-dispatch.com 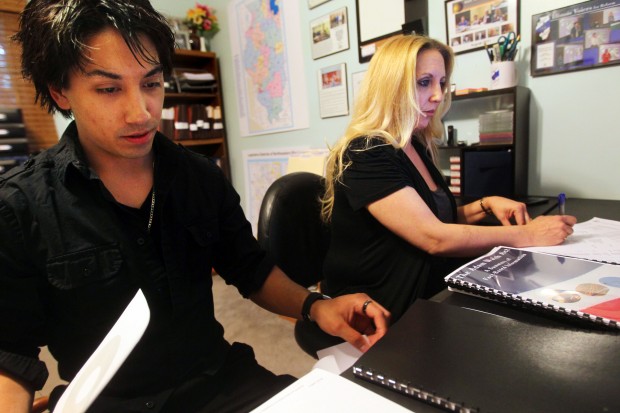 Tonia Maloney and her son Ryan Townsend, 24, work together on notebooks they have made to campaign against the federal Adam Walsh Act, which would toughen state sex-offender registry systems across the country with a minimum 15-year listing on Friday, April 13, 2012. Photo by Emily Rasinski, erasinski@post-dispatch.com

SPRINGFIELD, Ill. • Shane Sandborg isn't allowed to go near a school, park or playground. He can't go to many events with his two young sons. His housing and employment have been limited.

Sandborg is on Illinois' Sex Offender Registry. He was placed on the list because eight years ago, when he was 17, he got his 16-year-old girlfriend pregnant. Police found them together during the investigation of an unrelated burglary. She never made an allegation of force. Today he's married to another woman.

Sandborg's registry listing — available today, along with his mug shot, to anyone with an Internet connection — doesn't offer those details. Instead, it says he committed "Criminal Sexual Abuse" against a victim 9 to 16 years of age.

"We've been denied housing," says Sandborg, now 25, who lives in northwestern Illinois with his wife and children. "We got kicked out of a motel in Moline once because there was a park within 500 feet."

Under current Illinois rules that require sex offenders to be listed at least 10 years, Sandborg will be off the list in another two years. But the latest effort to toughen the system in Illinois could keep him there five years longer — along with as many as 800 other so-called "Romeo & Juliet" sex offenders in Illinois.

As Missouri and other states scale back their sex offender registries amid concern they're ruining lives for minor crimes, Illinois has continued piling on tighter restrictions, including recent bans on offenders visiting parks, forest preserves or Internet social networking sites.

Illinois now is considering a measure that would comply with the federal Adam Walsh Act, which calls for toughening state sex offender registry systems across the country with a minimum 15-year listing. In Illinois, that would apply retroactively to offenders like Sandborg, in which the cases arose from consensual sex between teenagers.

The toughened law will ensure "that the police and the community knows who these people are ... and reminds the sex offenders that they are being watched," state Sen. Bill Haine, D-Alton, sponsor of the measure, said in floor debate as the Illinois Senate passed the bill last month. It's pending in the House.

"Yes it is harsh ... on people who sexually exploit children," said Haine.

But critics say the continual toughening of the Illinois registry has become a runaway train, driven by tough-on-crime politics.

"We're going overboard with the young people that get wrapped up in the same definition as sex abusers just for doing something stupid," says Illinois Rep. Robert Pritchard, R-Sycamore, sponsor of last year's failed "Romeo & Juliet" legislation. It would have allowed removal from the list of offenders if the offender was within four years of the age of the victim, the victim was at least 14, and there was no force involved.

"I don't condone sexual behavior between minors ...", (but) this is ruining their lives," says Pritchard. "We've got too many dysfunctional people already. We don't need to be creating them."

Ryan Townsend, 24, of Lebanon, is on the list because of a relationship with a 16-year-old girl when he was 19. Police found topless photos of the girl, which could have led to Townsend's being designated a child sexual predator with lifetime registration.

Faced with that possibility, he says, he pleaded down to get a 10-year registry listing that included a legal designation of "force," though documents in the case make it clear there was no actual allegation of force.

"It's cut off a lot of possibilities for me," said Townsend. He said he has been unable to find work because of the listing, and that even a hobby like attending car shows is girded because they're often held at parks.

"With almost everyone I know, it comes up eventually," he said. "It's humiliating. You never get used to it."

Townsend's mother, Tonia Maloney, founded the group "Illinois Voices for Reform" two years ago to lobby for changes to the list.

"He took a deal. ... Now it looks like he's a 19-year-old who raped a 16-year-old," says Maloney, who is a paralegal in St. Louis. "They're keeping him away from schools. They're acting like he's going to hurt a child."

Maloney disputes the core rationale for sex offender registries: that sex offenders are more likely to reoffend than other types of criminals. In fact, a 2003 study by the U.S. Department of Justice found 43 percent of released sex offenders commit subsequent crimes of some kind, compared with a 68 percent recidivism rate for other criminals.

"When people hear 'sex offender,' I know what they think: 60-year-old man, 5-year-old child. I get that," says Maloney. "I think it all started with good intentions. Who doesn't want to protect children? ... But now, it's all political. It's not even about public safety anymore."

Maloney said a common story she hears through her organization is from people who agreed to their registry listings as part of plea bargains to avoid jail time, not realizing the ramifications of being listed.

Joseph Bull of Elgin said that's how he ended up on the list, after impregnating his 15-year-old girlfriend when he was 18.

"I went to high school with her. I ended up moving into her house," says Bull, now 25. He said her parents knew of the relationship, but when she became pregnant, they got angry and called the police. He said he entered a guilty plea as part of the deal to stay out of prison.

"I had no idea what the registry was — that I'd be on the Internet. I had no idea how bad it would be," said Bull. "I've been kicked out of (housing). I get pulled over (for traffic violations), and it says, 'Registered sex offender.'"

Defenders of the system say cases like those constitute just 3 percent of the more than 25,000 offenders on the Illinois list, and that the details aren't always so innocent.

"I spend a lot of time responding to this argument ... that the registry is full of young love gone wrong," says Cara Smith, of Illinois Attorney General Lisa Madigan's office. "The registry is not full of these cases."

Smith argued that critics who raise the "Romeo & Juliet" arguments are often "people opposed to the concept of a registry," who search out and hold up a few rare examples and use them to argue against the whole list.

Smith said that sex crimes are notoriously difficult to prosecute, and that even listings that appear questionable often involve details that explain why police, prosecutors and judges put them there.

"I guarantee you, many of those were charged with a higher crime, and it was pled down," making the crimes look less serious than they were, she said.

In Missouri last month, the House overwhelmingly passed a measure to scale back its list by removing offenses such as exposing oneself and promoting obscenity. It's pending in the Senate.

The sponsor of that bill, Rep. Rodney Schad, R-Versailles, said the presence on the list of those whom most people wouldn't consider sex offenders — such as those guilty of public urination — has diluted the meaning of the registry.

"It has desensitized us to who the true dangers of society are," Schad said last month. "We want to go back to the original intent" of the registry.

The Illinois bill to comply with the Adam Walsh Act is SB3359. The Missouri bill to scale back the sex offender registry is HB1700.

The woman was also a patient at the hospital's behavioral health services program.

The woman was able to escape and contact police.

Bicyclist shot in St. Louis as he tries to escape robber

The man was shot on the bike as he tried to get away.

He was accused of sexually assaulting girl for years.

A man was sentenced Friday to 20 years in prison for sexually assaulting a friend's three children.

Missouri House Bill 1700 would change the offenses for which people must register as sex offenders and how long they have to stay on the list.…

Proposed law may help some sex offenders get off registry

The bill's sponsor argues that people found guilty of offenses like public urination are put into the same category as pedophiles and child rapists.

Kevin Wright, sex offender: What do we do with him?

He served his time and earned a promotion at work, but consequences of his crime last a lifetime.

Tonia Maloney and her son Ryan Townsend, 24, work together on notebooks they have made to campaign against the federal Adam Walsh Act on Friday, April 13, 2012. Photo by Emily Rasinski, erasinksi@post-dispatch.com

Tonia Maloney and her son Ryan Townsend, 24, work together on notebooks they have made to campaign against the federal Adam Walsh Act, which would toughen state sex-offender registry systems across the country with a minimum 15-year listing on Friday, April 13, 2012. Photo by Emily Rasinski, erasinski@post-dispatch.com