ST. LOUIS — The city’s top fiscal body on Friday refused to approve the Board of Aldermen’s $168 million pandemic aid package amid a continuing dispute over whether some of it would meet federal guidelines.

Aldermanic President Lewis Reed’s motion to adopt the aldermanic package died for lack of a second from the two other members of the Board of Estimate and Apportionment, Mayor Tishaura O. Jones and Comptroller Darlene Green.

The estimate board’s move continues an impasse over the legal issues raised by Jones and the interim city counselor and supported Friday by Green. Reed insists that the wording in the bill would be allowed.

It’s unclear what will happen now because the approval of both boards is required for the measure to become law.

Jones says she also wants to help those areas but that federal rules don’t allow the money to be used on general economic development and that the bill should be reworded to explicitly tie it to problems related to the pandemic.

“We’re just trying to do it the right way,” the mayor said in the teleconference meeting.

Reed, the bill’s sponsor, maintains that his proposed program would be allowed and that the Jones administration in carrying out the spending could ensure that federal rules are followed.

“It ultimately is the use of the funds and the compliance piece that we put in place” that determines that, he said. A final version of the rules has yet to be issued, he added.

Aldermen on Friday began a two-month summer break after their own regular weekly meeting, which got underway a few minutes after the estimate board adjourned.

However, it’s possible that the board could be called back earlier if a compromise is worked out. Jones called on aldermen to reword the bill to meet her objections.

Aldermen on Tuesday night gave preliminary approval to the $168 million bill and had been expected to give it final passage at their meeting Friday. But that didn’t happen because the estimate board first had to sign off on it.

After the estimate board session, Reed and the Jones-Green duo in separate news releases each blamed the other side of the dispute for delaying badly needed aid.

Reed said the two other estimate board members “failed the people of the city of St. Louis.”

“This bill would have helped people today,” he said.

Jones said Reed’s refusal to agree to wording changes “will hold up millions of dollars in direct relief and public health infrastructure for St. Louis families.”

Green said Reed “is holding up rapid relief because of a disagreement about longer term projects” that could be dealt with in another round of federal aid to be allocated by city leaders later this year.

The development program at issue would assign $20 million to Dr. Martin Luther King Drive between Jefferson Avenue and the city limits, $5 million each to West Florissant Avenue between Acme Avenue and Union Boulevard and to Natural Bridge Avenue between Vandeventer Avenue and Kingshighway, and $3 million to North Grand Boulevard from Hebert Street to Cottage Avenue.

Under the bill, small-business owners, property owners, landlords and nonprofits could apply for grants from the pandemic aid funds to pay for 30% of the cost of new construction or half the price of a rehab. The projects must “enhance retail or cultural offerings in the community,” the bill says.

Extra aid would be available for applicants living within 2 miles of a corridor or those hiring at least two employees who do.

Nick Dunne, a spokesman for Jones, said the federal funds might be allowed for such a project only if it deals with a disparity caused by the pandemic.

Jones instead wants aldermen to assign the money to a new economic justice fund aimed at addressing disproportionate impacts of COVID-19 on low- to moderate-income people and on specified census tracts.

Neighborhoods and commercial corridors could be aided through spending on streets, streetlights, parks, community gardens, demolitions, commercial facade repairs and COVID-related items such as restaurant patios. Among other spending spelled out in her proposal are grants for small businesses hurt by the pandemic and job training programs.

During the contentious estimate board meeting, Reed and Jones each cited the same email to Reed from an accountant advising the city on pandemic aid to back up their respective positions.

Reed pointed out that Ted Williamson, a partner in the Rubin Brown accounting firm, said that “ultimately it is the manner in which the City expends the (federal) funds, and not the language of the board bill itself, that determines whether the City is in compliance.”

Jones noted that Williamson also said in the email that he recommends that the board bill “explicitly document that any funds spent on economic development are specifically intended to address the negative economic impacts of the pandemic.”

Williamson said associated city policies and documents on the actual expenditures also should include such assurances.

Taking part in the meeting was the interim city counselor, Matt Moak, whose legal opinion sparked the controversy.

When Reed asked Moak whether there’s anything in the bill that would prevent the city from setting up a program that complies with federal rules, Moak said, “I’m not saying that.”

Moak also said it’s apparent that the bill’s wording doesn’t meet the guidelines. That, he said, is “very bad practice.”

Jones on Friday proposed an amendment to move the money from the city’s main development agency to the Affordable Housing Commission, which her office says would remove the legal cloud over those funds.

The overall bill includes most of the $81.4 million in pandemic spending requested by Jones but also significant other outlays added by Reed and other aldermen.

Among the many allocations in the bill is money to help residents cover rent, mortgage payments and utility bills.

There also are millions of dollars for home repairs, neighborhood violence prevention initiatives, help for the homeless and efforts to get more city residents to get coronavirus vaccines.

There also is money for $500 one-time cash payments to about 10,000 residents affected by the pandemic and for gift cards to encourage people to get vaccinated.

Board OKs Foundry package Aldermen on Friday passed a revised tax incentive package for the $160 million second phase of the City Foundry project along a midtown stretch of Highway 40 (Interstate 64.)

Under the deal worked out by the Jones administration and Alderman Tina Pihl, 17th Ward, developer Steve Smith agreed to put $1.8 million into the city’s Affordable Housing Trust Fund.

The money is to be used in north St. Louis and the Forest Park Southeast neighborhood in part of Pihl’s ward.

The deal also calls for $18 million in tax-increment financing for the second phase, up from $17.3 million approved previously. The developer also is getting a sales tax exemption on construction materials valued at $2.8 million.

School moratorium The board sent to a committee a proposed resolution that would back a symbolic ban against any new schools opening in the city amid a continuing decline in the population of children.

Backers say the goal is to pressure charter school operators to curtail their growth. 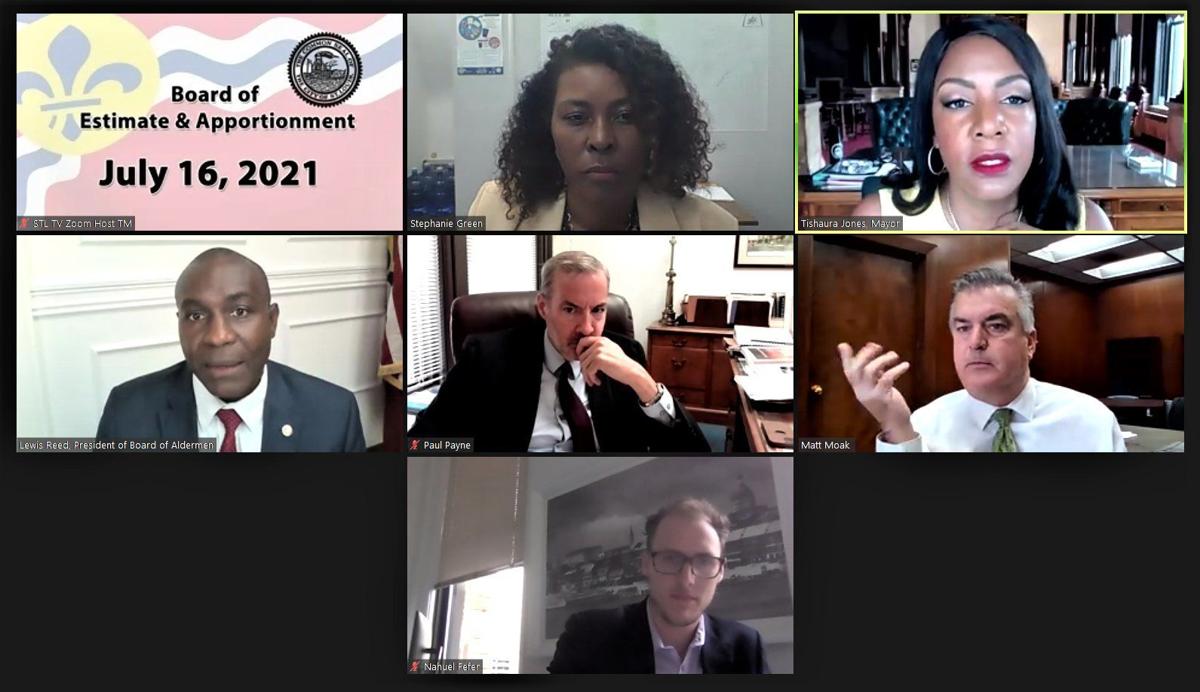 The St. Louis Board of Estimate and Apportionment met Friday, July 16, 2021 (screengrab) 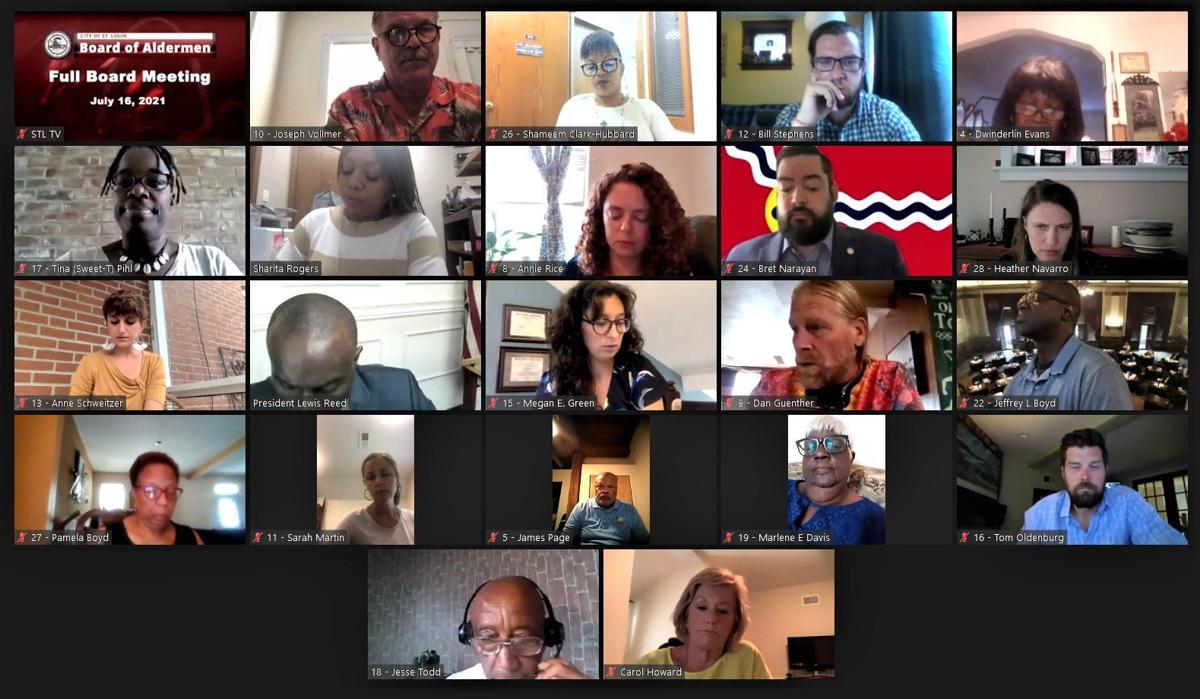