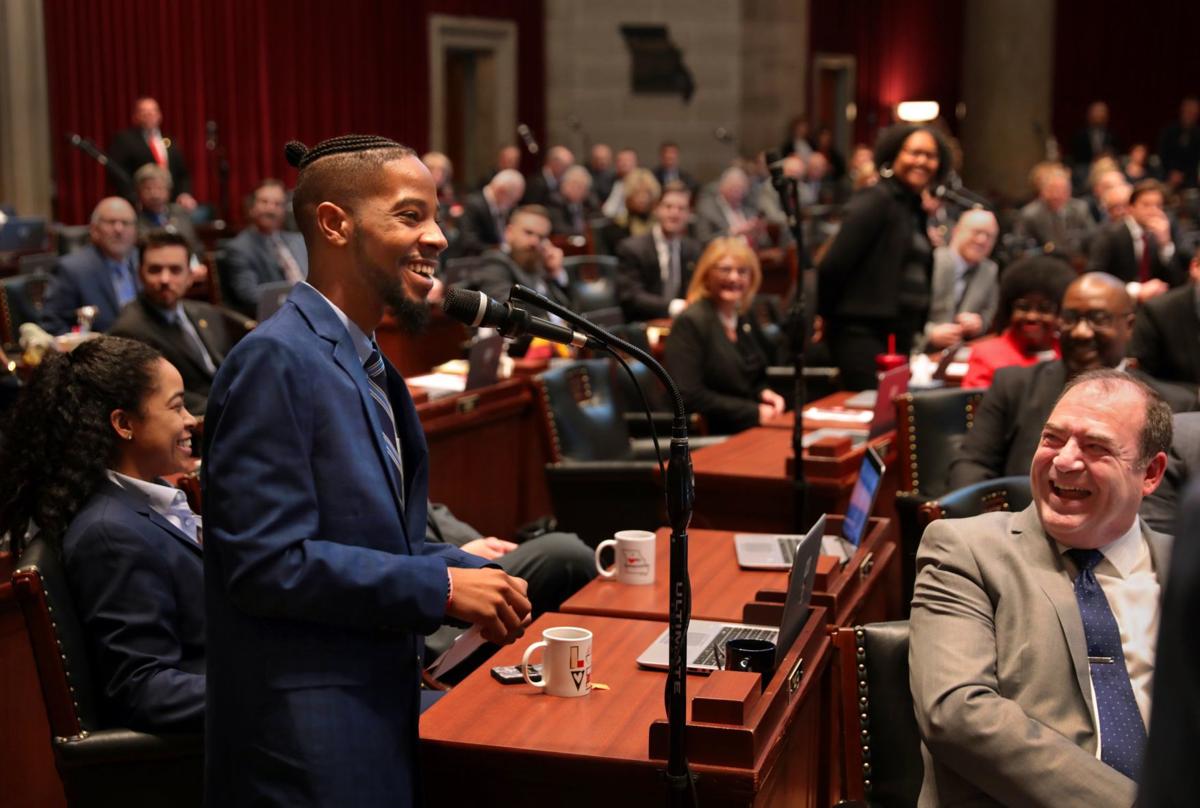 Missouri State Rep. Rasheen Aldridge, D-St. Louis, delights House members including Rep. Doug Clemens, right, D-St. Ann, as he introduces his family and friends who came to see his swearing-in as the new 78th district representative on Wednesday, Jan. 8, 2020 at the Capitol in Jefferson City. Aldridge, 25, won the seat in a special election, replacing Bruce Franks, who quit the office. Photo by Robert Cohen, rcohen@post-dispatch.com 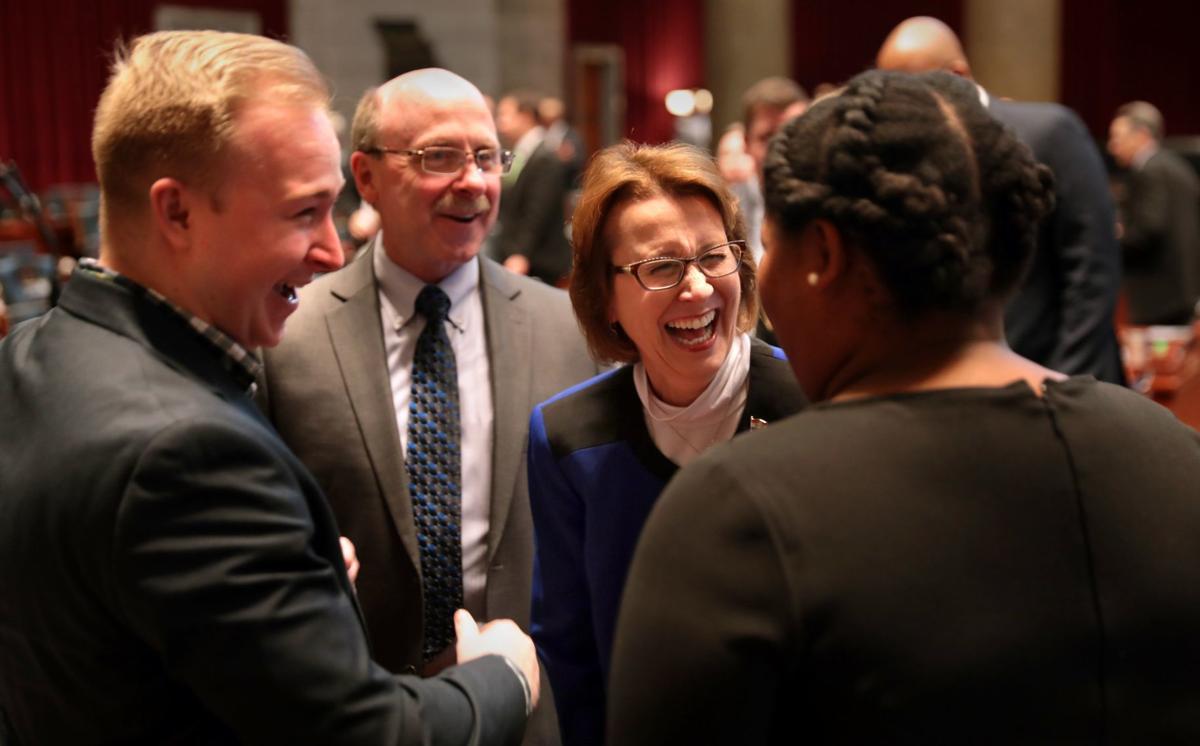 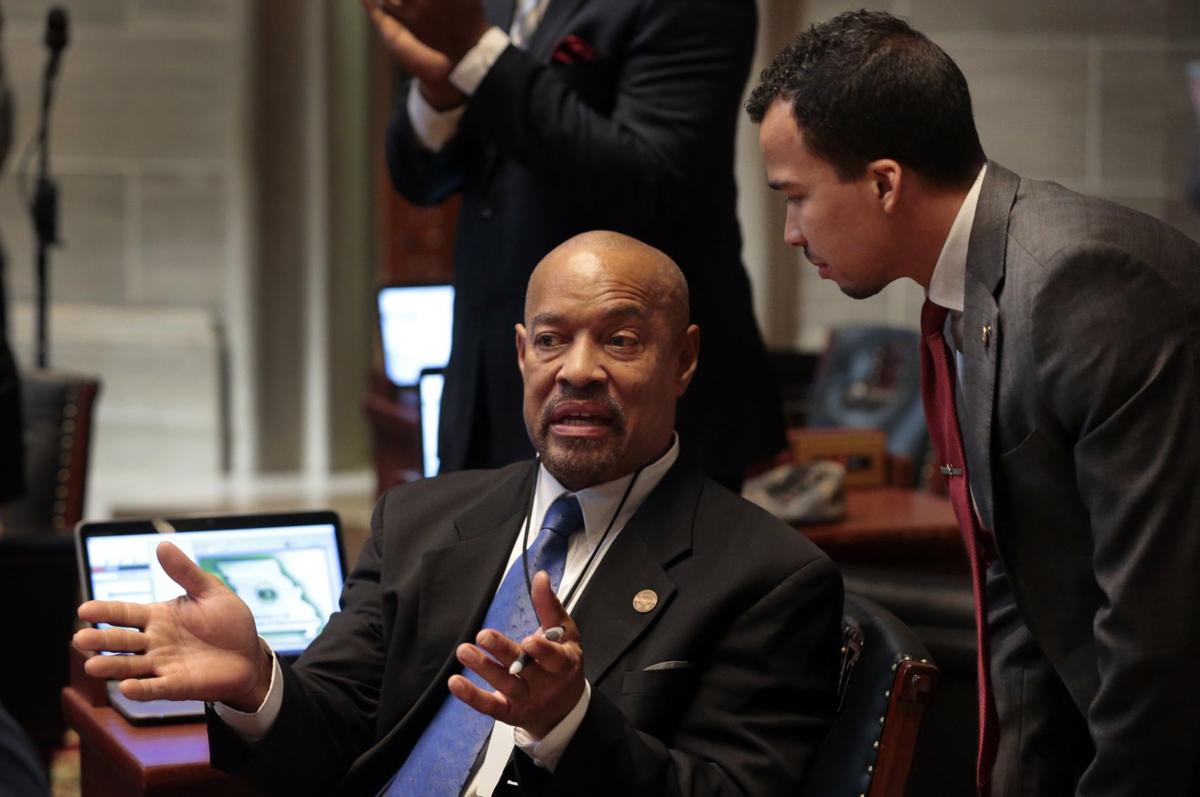 JEFFERSON CITY — With the specter of the 2020 election season looming, Republicans gaveled in the new legislative session Wednesday with a call for cooperation among themselves.

In a letter to colleagues obtained by the Post-Dispatch, Senate Majority Floor Leader Caleb Rowden, R-Columbia, said “we are not as important as we think we are,” and “ambition shouldn’t be part of our equation.”

The note came amid questions over how much Republican infighting there would be this year in the Legislature’s upper chamber. Last year, a group of six Republicans formed the Conservative Caucus, which launched into multiple filibusters, regularly stalling business.

“We have a tremendous opportunity before us: Republican supermajorities in both chambers, a Republican in the Governor’s mansion, and Republicans in all but one statewide office,” Rowden said in his letter. “(I)ts continued existence isn’t guaranteed. We don’t know what might occur as a result of the 2020 elections, therefore it’s critical that our caucus cooperates and collaborates to take full advantage of this opportunity the voters have given us.”

For GOP leaders, the game plan is to steer clear of controversy in a year in which all 163 seats in the House and half of the Senate’s 34 seats will be on the ballot.

But, despite the GOP’s iron grip on control of the House and Senate and governor’s office, there could be unwanted fireworks as lawmakers grapple over issues like gun violence in Missouri’s urban centers, the state budget, and spending on road and bridge construction.

Gov. Mike Parson will outline his agenda during his State of the State address next week. He has already promised to continue pushing for workforce development programs as he heads into a November electoral match-up with Democratic state Auditor Nicole Galloway.

In a bid to address gun violence in St. Louis, Parson in November signed on to a plan designed to keep handguns away from minors, domestic abusers and other violent criminals.

Within days, legislative leaders rebuffed the platform, saying they would not support any new laws that would affect gun ownership rights.

The governor and the House also are at loggerheads over a key starting point for building the state’s $30 billion budget. The House wants to keep a $100 million cushion in the spending plan, while Parson wants to use that money for other programs.

House Speaker Elijah Haahr, R-Springfield, said he and the chairman of the House Budget Committee have talked with Parson about the impasse.

“We hope those discussions will be fruitful,” Haahr said.

In both the House and Senate, a top priority will be placing a constitutional amendment on the ballot to repeal a change in how legislative districts are drawn after the U.S. census is completed.

Instead of a partisan commission drawing the maps, voters in 2018 strongly endorsed a nonpartisan demographer for the job. Republicans are concerned that could lead to a loss of seats they control in each chamber.

Senate President Pro Tem Dave Schatz, R-Sullivan, is targeting the spread of illegal gambling machines in gas stations, bars and restaurants. He has introduced legislation to ban the terminals.

A proposal to allow student athletes to get paid also is expected to be debated.

Democrats are set to play defense once again.

In the House, Democrats pledged to try to protect voter-approved reforms from meddling by Republicans.

The day included the swearing in of three new St. Louis area members of the House, who were elected in special elections in November.

The district includes areas such as Ballwin, Manchester, Valley Park and Twin Oaks.

Also sworn in were Mike Person and Rasheen Aldridge, who won easy victories in races for open House seats in the 74th and 78th districts in north St. Louis County and St. Louis.

The 78th District takes in much of downtown St. Louis.

Jack Suntrup of the Post-Dispatch contributed to this report

As a senator, Gov. Mike Parson was successful in getting $50,000 earmarked for a valet. The idea did not advance past the Senate.

They're back: Missouri Legislature returns with residency, redistricting on agenda

Expect spirited debate over numerous issues as the Missouri House and Senate return to Jefferson City on Wednesday for their 4½-month legislative session.

Missouri State Rep. Rasheen Aldridge, D-St. Louis, delights House members including Rep. Doug Clemens, right, D-St. Ann, as he introduces his family and friends who came to see his swearing-in as the new 78th district representative on Wednesday, Jan. 8, 2020 at the Capitol in Jefferson City. Aldridge, 25, won the seat in a special election, replacing Bruce Franks, who quit the office. Photo by Robert Cohen, rcohen@post-dispatch.com