In Missouri, Obama cites better economy, but says more must be done
0 comments
Share this
All our Winter Warm-Up coverage for 99¢
1 of 2 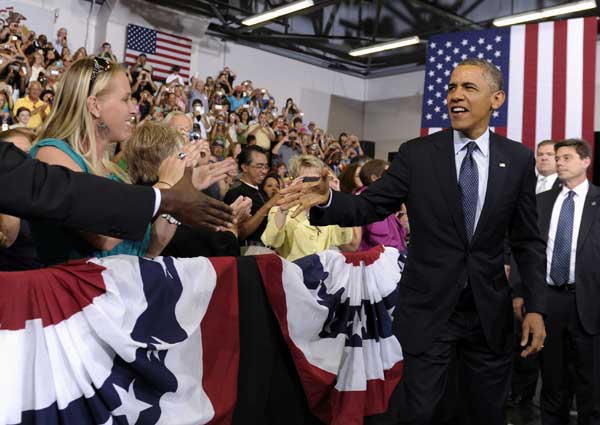 President Barack Obama shakes hands as he arrives to speak about the economy at Knox College in Galesburg, Ill., on Wednesday, July 24, 2013. (AP photo) 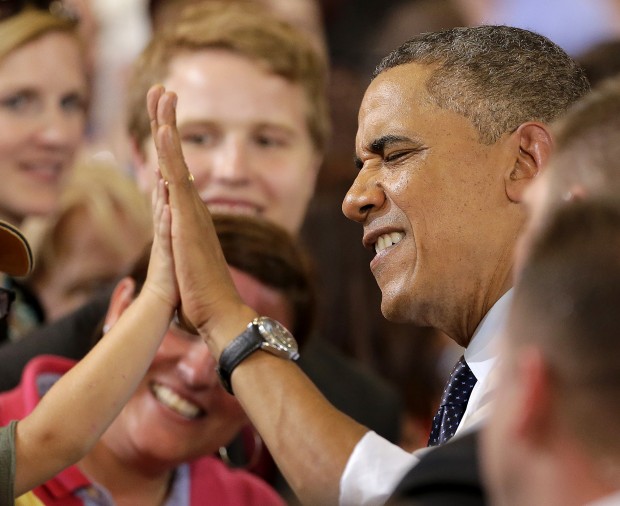 President Barack Obama gets a high five from a youngster after speaking about the economy at the University of Central Missouri in Warrensburg, Mo., on Wednesday, July 24, 2013. (AP Photo/Charlie Riedel)

WARRENSBURG, MO. • President Barack Obama on Wednesday chided some congressional Republicans for “an endless parade of distractions ... and phony scandals” and told a throng of cheering college students here that he intends to refocus the remainder of his presidency on the economy.

“It’s got to stop. We’ve got to focus on jobs and the economy,” Obama said in speech. It was the second of three stops this week in his attempt to reset a national discussion that he claims has been hijacked by political gamesmanship.

“I’m not going to allow gridlock or inaction or willful indifference to get in this country’s way,” he said.

The roughly half-hour speech laid out a series of economic goals centered largely on improving elementary and higher education while bringing down college costs and loan rates.

As Republicans were quick to point out, Obama didn’t offer much in the way of specifics, saying that would come later.

The Missouri GOP tweeted a criticism of the employment situation since he took office with the hashtag: “#SpeechesDontHire”

He said more would be possible if Congress would “set aside the kind of slash-and-burn partisanship we’ve seen in the past couple years.”

Obama spoke to a friendly audience made up largely of college students, who packed a gymnasium at the University of Central Missouri, about 60 miles southeast of Kansas City.

“It is great to be back in Missouri,” Obama said, pronouncing it “Missourah.”

Missouri Democrats Gov. Jay Nixon and Sen. Claire McCaskill were on hand but didn’t speak at the event, which began an hour late.

Obama mentioned both of them from the podium and noted it was McCaskill’s 60th birthday: “I figured the least I could do is give her a ride on Air Force One.”

Warrensburg was the second of three stops for Obama this week in his push for a renewed discussion about the economy. Earlier in the day, he appeared in another gymnasium, in another college town — Galesburg, Ill., home of Knox College — and delivered largely the same message.

The speeches are being viewed as Obama’s attempt to steer a national conversation that has veered wildly across several issues during his second term: guns, immigration, gay marriage — and what the White House has repeatedly derided as a series of “phony scandals” promoted by Republicans.

Back in Washington, Sen. Roy Blunt, R-Mo., said on the Senate floor that he was glad the president is visiting Missouri. “But these speeches sound an awful lot like the 2012 campaign speeches. I think we need to move beyond that. We need to not just pivot to the economy, but we need to stick with the economy.”

Other Republicans and business groups in Missouri and beyond ripped Obama for what they allege was a political speech short on economic details.

“Our nation would be in a better place if, instead of spending all his time giving speeches filled with unrealized rhetoric about a better America, President Obama would actually work with Republicans to address the enormous problems facing our nation,” Missouri House Speaker Tim Jones, R-Eureka, said in a statement.

Brad Jones, state director of the Missouri chapter of the National Federation of Independent Business, warned in a statement: “Mr. President, they call Missouri the Show-Me State for a reason. You can’t come here and just talk. You need to show us that you really get it.”

As Obama arrived in Missouri, he also took criticism from the left. A coalition of environmental activists used the event to demand that Obama refuse to approve the pending Keystone XL crude-oil pipeline from Canada to the U.S. Obama’s administration hasn’t decided whether to give environmental approval to the project.

“The President has promised to take action (on the environment), and we want to hold him to that promise,” James Turner, chair of the Sierra Club Missouri Chapter, said in a statement.

U.S. Rep. Ann Wagner, R-Ballwin, urged the opposite action in a statement: “Right now, President Obama can approve the Keystone XL pipeline and create tens of thousands of good-paying jobs while ushering in a new era of energy independence.”

Obama focused a large piece of the speech on education. He called for working with states to make “high-quality preschool” available starting at age 4. He also called for creating universal access to computers for high school students and fostering a greater focus on math, science and engineering.

In addition to bringing down student loan rates, Obama said, “We’ve got to do something about college costs.” It’s “an undisciplined system” where costs are out of of control.

He blamed, in part, state governments shortchanging colleges in their budgets, causing those institutions to seek high tuitions. He called on states to “prioritize higher education in their budgets.”

He said he has asked his team to “shake the trees” for cost-savings ideas for colleges and will present them later this year.

As Obama spoke in Missouri, the U.S. Senate voted to bring down the cost of federal student loans for a time by tying the interest rates to market rates.

The Warrensburg trip marks Obama’s first visit to Missouri since a May 2012 commencement speech at Joplin High School marking the one-year anniversary of a deadly tornado that hit the southwestern Missouri city.

Obama is scheduled to deliver his third speech on the economy today in Jacksonville, Fla.Earlier Wednesday in Galesburg, Obama returned to the college campus where he gave his first major economic address as a U.S. senator, and he chided Congress for being less concerned about the economy and more about “an endless parade of distractions, political posturing and phony scandals.”

Bill Lambrecht of the Post-Dispatch Washington Bureau contributed to this report.

Regarding "In Missouri, Obama tries to pull conversation back to economy" (July 25):

He will be in western Missouri and Illinois today, Florida Thursday.

President Barack Obama shakes hands as he arrives to speak about the economy at Knox College in Galesburg, Ill., on Wednesday, July 24, 2013. (AP photo)

President Barack Obama gets a high five from a youngster after speaking about the economy at the University of Central Missouri in Warrensburg, Mo., on Wednesday, July 24, 2013. (AP Photo/Charlie Riedel)