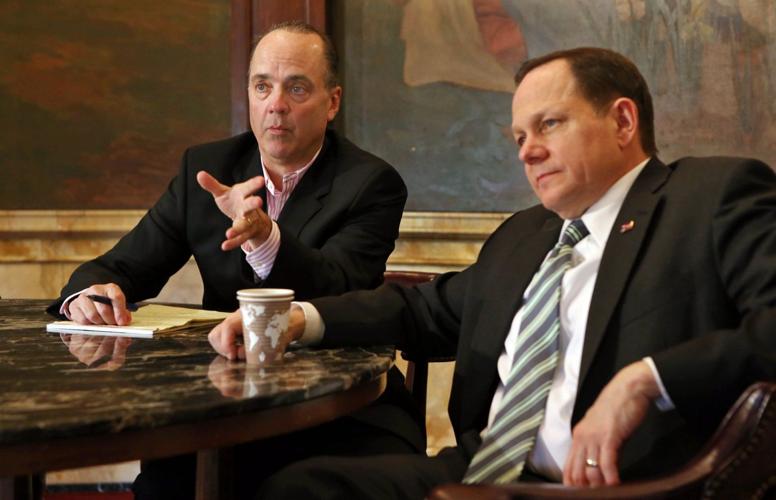 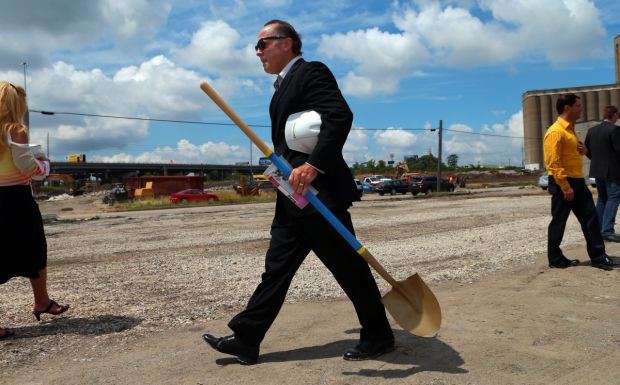 ST. LOUIS • The man whose voice has thundered across City Hall from Room 200 for more than a decade soon will leave his post.

Operating out of an office next to Mayor Francis Slay, Jeff Rainford has battled adversaries, cajoled business leaders, debated reporters, enforced Slay’s agenda and fundamentally changed city government. Early next month, he will officially resign the chief of staff position he has held since 2001, he said.

Rainford, a former television reporter, leaves a legacy as one of the city’s most effective staff leaders. Along the way, he became known as a fierce, unflinching defender of Slay, always ready to go to the mat to keep the administration’s policies on track. His brash personality has drawn praise and criticism.

“Every waking minute my sole job was to make the city a better place and to make him a better mayor,” Rainford said in an interview. “But all good things must come to an end. I know it’s going to be an adjustment.”

Rainford plans to reopen the political and communications consulting business he had before joining Slay’s administration in 2001. He said he hasn’t officially signed any clients in order to “uphold the integrity” of his current office.

Rainford, 55, said he plans to continue as an adviser to Slay on “high-level policy matters” and will remain based in the city.

“I won’t be driving around after a bad snowstorm to make sure we haven’t missed any of our routes,” Rainford said. “I’ll be advising on things like what to do about Ferguson or keeping the region an NFL city.”

Rainford first started working for the mayor in 1994, when he encouraged Slay, then an alderman, to run for aldermanic president. He ran Slay’s first campaign for mayor in 2001. He became chief of staff after the campaign.

Rainford was an instrumental figure in regaining control of the city’s police department, which had been run by the state since the Civil War, and tackling the issue of pension reform — a move that preserved the city’s credit rating and saved it from significant budget cuts.

Slay called Rainford passionate. “He says what he believes. He has the relentlessness that I really demand of people that work with me.”

Slay recalled one night having accidentally silenced his cellphone. He said after he had gone to bed, a tornado struck during the middle of the night — and Rainford couldn’t reach him.

“He drove over to my house and was knocking on my door at 1 o’clock in the morning,” Slay said. “He doesn’t think, ‘I’m just going to go to bed and deal with it in the morning.’”

Rainford’s departure comes at a critical juncture for Slay, the city’s longest serving mayor who is expected to seek a record fifth term in 2017.

Slay lost a longtime friend and regional ally in Charlie Dooley, who was defeated in a bruising Democratic primary for county executive last November by Steve Stenger. City and civic leaders are battling to keep an NFL franchise while struggling to deal with the aftereffects of the unrest in the nearby suburb of Ferguson. And since August, St. Louis has seen a rise in violent crime.

With Rainford at his side, Slay successfully lobbied to wrest control of the city’s police department from the state in 2013. Now, the mayor has control over the police department — as well as more accountability for its performance.

Tom Irwin, the executive director of Civic Progress, an organization representing the region’s largest employers, noted that Rainford’s shoes will be hard to fill.

“I’d be a liar if I said I didn’t have some concern,” Irwin said. “In order to get things done, there are going to be times you have to crack the whip. Jeff cracks the whip. He is better than just about anybody at the job. [He] mastered the art of knowing what decisions he could make and what decisions needed to be brought to the mayor.”

Rainford, whose departure has been rumored for so long that most figured it would never happen, said he isn’t irreplaceable.

“Stan the Man retired in 1963, and the Cardinals won the World Series in 1964,” Rainford said, referring to Stan Musial.

Richard Callow, a longtime communications adviser to Slay, called Rainford’s exit the “anchor-move in a transition of the mayor’s office that began five years ago.”

“Credit Jeff as its chief architect,” Callow said. “Jeff has never met a problem that he didn’t want to throat-punch. I have never met a more effective chief of staff.”

Ponder said she has learned from Rainford.

“For as tough as he is, he is a good person,” Ponder said. “He has treated us like family.”

Ponder, 34, admitted she has a somewhat different style than Rainford.

“I have a longer fuse than he does, and a softer approach,” Ponder said.

When asked if other staffers would hear her shouting in the chief of staff’s office (something Rainford is known for), Ponder replied: “Yeah, they will when appropriate.”

Rainford, who grew up in Webster Groves, had a previous career in the news media, working in the 1980s and ’90s as a news reporter for KMOX radio and KMOV (Channel 4).

That background, many say, helped Rainford hone Slay’s public image as one of the area’s most popular political figures.

In 1993, Rainford drew controversy when he and another reporter worked on a story that involved using a male prostitute to secretly record a Belleville-area priest with hopes of getting him to reveal details about sexual misconduct. At the time, the Belleville Diocese was rocked by a child sex abuse scandal.

The story never aired. Rainford left KMOV later that year when his contract with the station expired.

Rainford became a consultant and started working with Slay the following year.

At times, Rainford’s quick defense of the mayor and the city has gotten him into trouble. In 2011, Rainford questioned the story of three Marines, in town for a recruiting and publicity event, who told police they were mugged by two men on a downtown street.

“I said, ‘Yeah, it didn’t happen,’” Rainford said at the time. “There’s three Marines with a knife! There’s two guys without a knife! Give me a break!”

Through the years, Rainford’s personality has gained critics.

“Jeff seemed to be focused from day one on making the city of St. Louis a stronger mayoral system,” said Alderman Antonio French, who has consistently opposed Slay’s administration. “He has fought to increase the power of the mayor’s office. That is done through lots of hardball politics.

“One may argue they have been successful in a lot of those battles, 50 percent plus one,” French said. “Mary Ellen has a different style. This could be a good opportunity for the administration.”

Tom Shepard, the chief of staff to Board of Aldermen President Lewis Reed, said “the change will definitely be noticeable to insiders.”

“His personality and skill set played a big role in the management of that office,” Shepard said.

Rainford acknowledges his personality can sometimes be tough but says his goal was always to get something done.

“We’re pushing $9 billion in investment in the city since the mayor took over,” Rainford said. “I’m proud of what we’ve done in the area of fairness, in creating a prisoner re-entry program, in allowing the first gay marriages in Missouri. We were not afraid to take on the tough things like local control and pension reform.”

And now, behind that tough exterior, Rainford admits he will have a hard time leaving.

St. Louis to forgive about 220,000 warrants for nonviolent municipal offenses

Day will mark end of 152 years of state control

The police department had scaled back extra patrols after the holiday season. But the police chief pledges an "elevated awareness" for downtown.