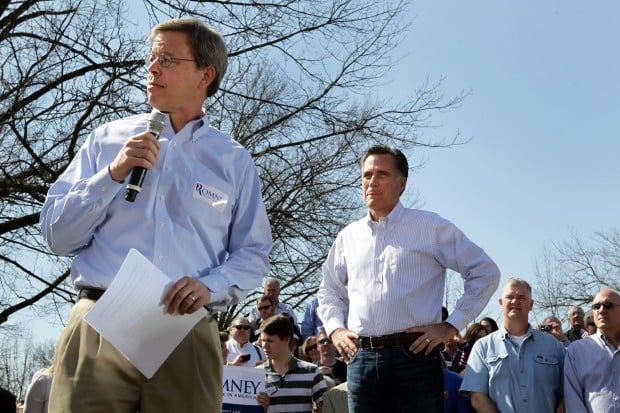 Mitt Romney (right) awaits introduction by former U.S. Sen. Jim Talent after taking the stage at a campaign stop in the city park of Kirkwood on Tuesday, March 13, 2012. Photo by Robert Cohen, rcohen@post-dispatch.com 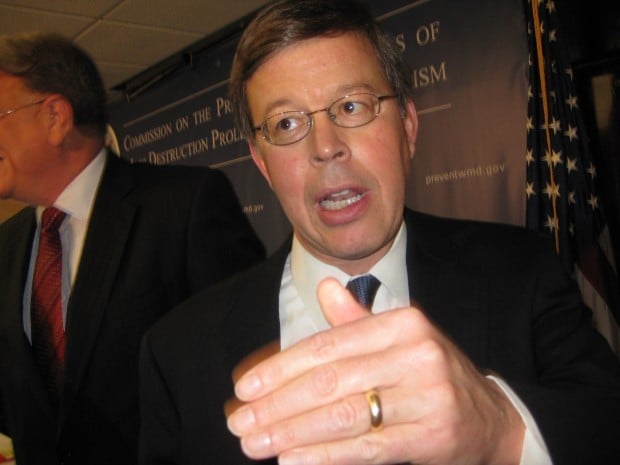 TAMPA, Fla. • When Mitt Romney met with British and Irish leaders in London on his European trip, Jim Talent was one of three Romney advisers in the room.

As a surrogate campaigner for Romney, Talent has helped beat down primary opponents such as Newt Gingrich, calling the former House speaker an unreliable leader who undermines conservatives with "outrageous and destructive statements."

This summer, Talent raised money for Romney and assisted in battleground states. Speaking to reporters in Virginia, he warned that potential defense cuts — part of the bipartisan Budget Control Act last year — could wreck the economies in defense-heavy states.

"In all my years in and around Washington, it's the most irresponsible thing a commander-in-chief has done," he said.

Talent, a former congressman and U.S. senator from St. Louis County, has been an adviser on national security issues since Romney's first presidential quest in 2008. In this campaign, his portfolio has expanded to other issues, including welfare reform and energy. The energy Talent is devoting to the campaign also has increased.

If Romney wins, the hawkish Talent is widely viewed as perhaps the strongest candidate for secretary of defense, a position in keeping with the path he has followed in recent years.

Since losing his Senate seat to Claire McCaskill in 2006, Talent, 55, has immersed himself in security issues in appointive posts, most notably on panels warning of threats of bioterrorism and other potential methods of terrorism. He's also co-chairman of Mercury Public Affairs, the successor of Fleishman Hillard Government Relations.

As a principal national security adviser for Romney, Talent has helped make the case for an assertive foreign policy, as he did Monday in an early morning presentation to Missouri delegates to the Republican National Convention.

"We were never stronger as a nation than we were in the Reagan administration," Talent said, delivering an overview of defense policy and "asymmetric warfare" that delegates might or might not have been prepared for after late-night parties.

Talent has been willing to take on a variety of tasks for the Romney campaign, both political and substantive. In the Republican National Committee's platform deliberations last week, he chaired the subcommittee on national security and foreign policy and represented the Romney campaign on the full panel.

This week, amid the scheduling nightmare caused by Tropical Storm Isaac, Talent is speaking for the Romney campaign at events around rain-soaked Tampa, among them a panel organized by the American Israel Public Affairs Committee.

Talent's personality and his cerebral approach have earned the trust of Romney, according to allies of both. Their relationship increases the likelihood that Talent would play a key role in a Romney administration, probably helping to shape the West Wing.

"He knows what the heck he's talking about," said Bucci, now a defense and homeland security expert at the Heritage Foundation, a right-leaning Washington think tank with which Talent also is affiliated.

"He's a rock-solid guy who doesn't think in a partisan way on these issues. And he doesn't have a big ego," Bucci said. "He's not the kind of guy who's going to stick his face out there. He would understand who's the boss."

Last month, Romney's performance on his six-day trip to Britain, Israel and Poland suggested that he's in the market for advice. The trip was designed to burnish his foreign policy credentials but had the opposite effect with perceived missteps along the way, starting with Romney questioning British readiness to host the 2012 Olympic Games.

Romney also declared Jerusalem the capital of Israel despite American policy spelling out that the designation of the capital is for Israel and the Palestinians to sort out in negotiations.

Talent insists that Romney has stronger foreign policy credentials than most people know. He attributes the bad press for the trip to the London remarks setting the tone for coverage.

"The way this business works, people are going to jump on what you say. You wish they hadn't done that in London, but it's a wild and woolly game," he said.

A potential role in a Romney administration is not something Talent is willing to discuss. But since he bypassed the opportunity to take on McCaskill in a rematch, it's been assumed by many Republicans that Talent is putting himself in line for a significant post if Romney prevails.

On Monday, Talent was not certain of the vantage point he'll choose when the former Massachusetts governor delivers his acceptance speech this week — watching it from the convention floor as a Missouri delegate, or in cozier environs with others from the Romney brain trust.

Previewing Romney's speech, Talent noted that foreign policy is not a front-of-mind issue for voters. "A general theme," he said, "is that we've gotten weaker and that we have not nurtured the alliances that are necessary for our future and our freedom."

Talent knows that after Romney formally becomes the candidate, his own schedule will fill up even more. Beyond his work on policy, Talent has been valued by the Romney campaign for his willingness to engage groups of reporters on conference calls to take aim at opponents.

"Everything is just going to intensify. Now we're really in the red-zone time of the campaign," he said, referring to the final 20 yards on a football field in front of the goal line.

Like others in the Romney camp, Talent is distressed by the confluence of a tropical storm and his party's convention for the second consecutive presidential election. Republicans have been eager for this opportunity to reintroduce a candidate with the most pronounced image problems of any major party nominee in recent times.

Now, with the strong storm following a worrisome path toward the Gulf Coast, the attention of voters could be diverted.

"I think there's always distractions, always issues that come up. I do think, obviously, the hurricane is an unusual issue because there's a significant human element that everyone is concerned about," Talent said.

"But this campaign is about such important things that I think we're going to be able to get across our message."

GOP convention gets off to quiet start

In Tampa, Talent and GOP reach out in new ways

Republicans, not known for embracing technology in political campaigns, are making strides.

Mitt Romney (right) awaits introduction by former U.S. Sen. Jim Talent after taking the stage at a campaign stop in the city park of Kirkwood on Tuesday, March 13, 2012. Photo by Robert Cohen, rcohen@post-dispatch.com