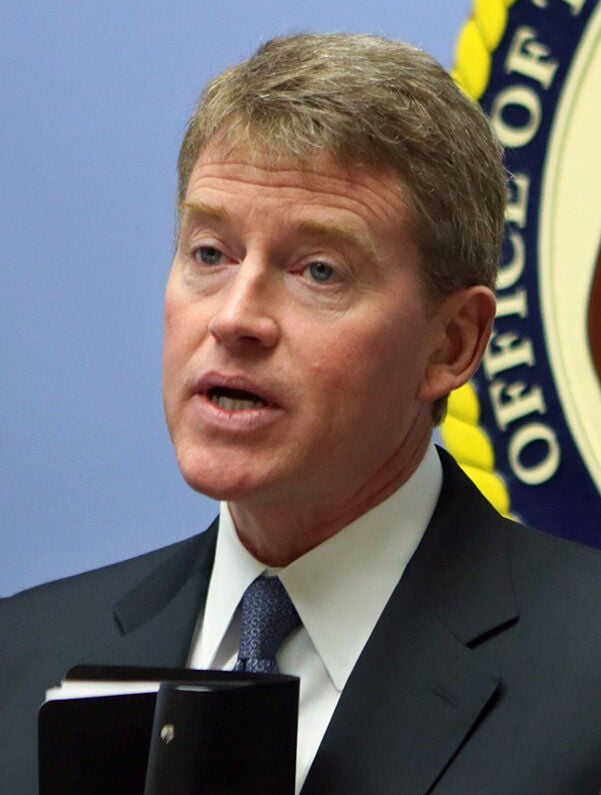 Attorney General Chris Koster at a news conference on Thursday, Dec. 18, 2014, in St. Louis. He is running for governor as a Democrat. Photo by Huy Mach, hmach@post-dispatch.com

ST. LOUIS • Attorney General Chris Koster has moved to dismiss Gov. Jay Nixon, the lead defendant and chief stadium champion, from a lawsuit over financing for a new riverfront stadium.

Two weeks ago, Sen. Rob Schaaf, R-St. Joseph, and five other state legislators sued Nixon and the public board that owns and operates the Edward Jones Dome to block state funding of the proposed $985 million football stadium in St. Louis.

The suit alleges that taxpayer money is “in the process of being spent illegally,” on “an illegal construction of a new NFL stadium.”

But Koster argues in a motion — one full of grammatical lessons — filed this week that Schaaf’s suit fails to “allege any actions taken by the Governor at all, much less any action taken in excess of his authority.”

The motion is nearly sarcastic in its simplicity, and dwells on the use of pronouns and apostrophes in Schaaf’s suit.

Koster’s argument, essentially, is that the Dome authority, not Nixon, is spending the money ($3 million so far) on stadium plans and therefore the governor could not have exceeded his statutory authority.

Koster’s office declined to comment on the case. Nixon’s office didn’t call a reporter back.

But Schaaf did. “I think the same thing I always thought,” he said. “This isn’t about the stadium. This is about the power of the governor.” It’s about putting the state in debt, he continued.

Lawsuit motions always sound good, he cautioned, “But you’ve got to hear both sides.” His attorneys will counter, he said. “It will sound just as good, I guarantee.”

Schaaf’s is the second suit challenging the stadium proposal. The first was filed in April in St. Louis by the Dome authority itself. It asked a judge to rule on the legality of a city ordinance requiring a public vote on taxpayer spending for new stadiums. The next hearing is scheduled for June 25.

Schaaf’s suit attacks proposals by a Nixon-appointed task force to fund about $250 million in construction of the new stadium by extending debt payments on the Jones Dome, where the St. Louis Rams now play.

The governor is trying to be dismissed from the lawsuit.

The judge scheduled the next hearing for June 25.

Environmental Operations Inc. will study toxic conditions on and under the footprint of the proposed new football arena.

Attorney General Chris Koster at a news conference on Thursday, Dec. 18, 2014, in St. Louis. He is running for governor as a Democrat. Photo by Huy Mach, hmach@post-dispatch.com