ST. LOUIS — As Lyda Krewson prepares to leave City Hall after four years as mayor, she still believes that the metro area’s fragmentation “has stunted our growth and is holding us back.”

But the heavy opposition to the Better Together plan discarded in 2019 convinces her that major governmental reorganization won’t happen here “in my lifetime.”

“The people have clearly liked the structure they have,” Krewson said in a wide-ranging exit interview last week. “Change is really hard for everybody. And the Better Together proposal was very extensive change.”

Krewson, who will be succeeded by City Treasurer Tishaura Jones on Tuesday, had been a supporter of the plan, which sought to merge the city, St. Louis County and county municipalities.

“Our response to it was very balanced, very decisive, trying to balance the interests between keeping people healthy and keeping people employed,” she said.

She also cites the momentum of new development, such as the pro soccer stadium complex under construction, the Union Station aquarium and the new St. Louis University hospital.

And she notes that the 100-acre site for the planned National Geospatial-Intelligence Agency headquarters was prepared and turned over to the federal government during her watch. Moreover, she said building permits for construction of various types increased. There also was an uptick in city demolition of dilapidated vacant buildings.

Along with the successes, she said, was what she called the worst time of her mayoral tenure — the beginning of last June, when violence and looting spread in the city following peaceful protests after the death of George Floyd in Minneapolis police custody.

“Four police officers were shot, a retired police captain was killed,” she said. “The next day we put a curfew in place.”

That wasn’t the only time Krewson and city police had to deal with demonstrations over the past four years.

The first wave happened in 2017 a few months after she took office — after the not-guilty verdict for a white former police officer, Jason Stockley, in the 2011 shooting death of a Black suspect, Anthony Lamar Smith.

Asked if she’s satisfied with how the police department has operated in her tenure, Krewson said John Hayden, promoted to chief in early 2018, “has done a good job of de-escalating situations” with protests and has protected both demonstrators and the public.

Social justice activists, however, have repeatedly criticized the department and the mayor.

Several times the protests even reached her Central West End home, spurring her and her husband, retired TV reporter Mike Owens, to relocate last year to an apartment for at least two months.

Asked if she felt unfairly targeted, Krewson said “No, I’m never going to play the victim here. I understand there’s a racial reckoning going on in this country that’s long overdue. It’s a complex situation and these tragic incidents exacerbate the situation.”

Krewson and her public safety team also have faced an unceasing problem with violent crime, marked by the city’s worst-ever homicide rate in 2020.

She said the violence in the city “is heartbreaking,” along with crime problems in the county and other parts of the country. She said Missouri’s lax gun possession laws and the city’s chronic police staffing shortage are among the reasons.

To try to deal with the latter, she convinced city voters in 2017 to approve a sales tax hike to boost police pay. But she says city officers are still underpaid.

She also worked with Gov. Mike Parson to get the Legislature last year to repeal the residency rule for St. Louis police and other first responders hired before September 2023. However, city voters in November rejected making that change permanent and extending it to all civil service workers.

Krewson said the city needs to focus on beefing up both law enforcement and efforts to prevent crime and its root causes and that she tried to do both.

She said that included expanding spending on recreation for kids and starting to assign social workers to some 911 calls formerly handled by police.

In the interview, however, she stopped short of offering Jones, who has called for going to a prevention model of law enforcement, advice on that or any other subject areas.

“She hasn’t asked me,” Krewson said. “I’m not going to give her unsolicited advice. That’s the last thing she needs, any new mayor.”

Krewson added that “I am rooting for her success because her success is also the success of the city.” Krewson narrowly defeated Jones in the 2017 Democratic mayoral primary and the two have been at odds on some issues since then.

Krewson, however, is leaving behind a detailed set of recommendations for spending the $517 million in recently-passed federal pandemic aid expected to come to the city. It remains to be seen how many Jones, who outlined a plan of her own during her campaign, will adopt.

Krewson said she didn’t think her gender had any effect on how she was treated as mayor.

“Maybe only with regard to all the comments about what I wear, what my hair looks like, you get those comments that I don’t think most men get,” she said.

Asked if she wishes she had done anything differently, Krewson said “you don’t get the opportunity to look backwards. You’ve got to get up every day ... to make the best decision going forward. I’ll leave it at that.”

Also in the interview, Krewson:

• Said she wasn’t told by corrections officials about the failure of locking mechanisms at the main city jail downtown until after the first of several disturbances there, in late December.

Asked if she had chewed out anyone because of the problem, Krewson said: “I don’t talk about who I chew out....it’s a personnel question.”

• Said she tried in recent months to assemble a new list of appointees to the regional Board of Freeholders to submit to aldermen for approval but “I couldn’t get enough people lined up that … the president (Lewis Reed) was comfortable with.” Earlier nominees were stalled by an aldermanic committee.

Krewson, 68, said she had no specific plans for her pending retirement.

“I’m not looking for a new job; I’m retiring, remember,” she said. “I expect to take a lot more walks in Forest Park and to be seen in a lot more coffee shops.”

ST. LOUIS — It will be a new mayor for St. Louis on Tuesday but the same old pandemic, as Tishaura Jones takes office in a socially distant inauguration event at City Hall.

Jones, the first Black woman to hold the mayor’s post, will be sworn in along with Comptroller Darlene Green in a noon ceremony in the historic building’s rotunda.

All visitors will have to undergo temperature screening and are required to wear face masks and maintain six feet distancing.

Jones will be sworn in by Missouri Court of Appeals Judge Angela Turner Quigless and Green by U.S. District Judge Ronnie White.

Jones, who has been the city treasurer since 2013, was elected April 6 to succeed Mayor Lyda Krewson, who did not seek a second four-year term.

Because of the pandemic, city officials are encouraging the public to watch the ceremony online at youtu.be/yhuLC6abASA — Mark Schinkmann 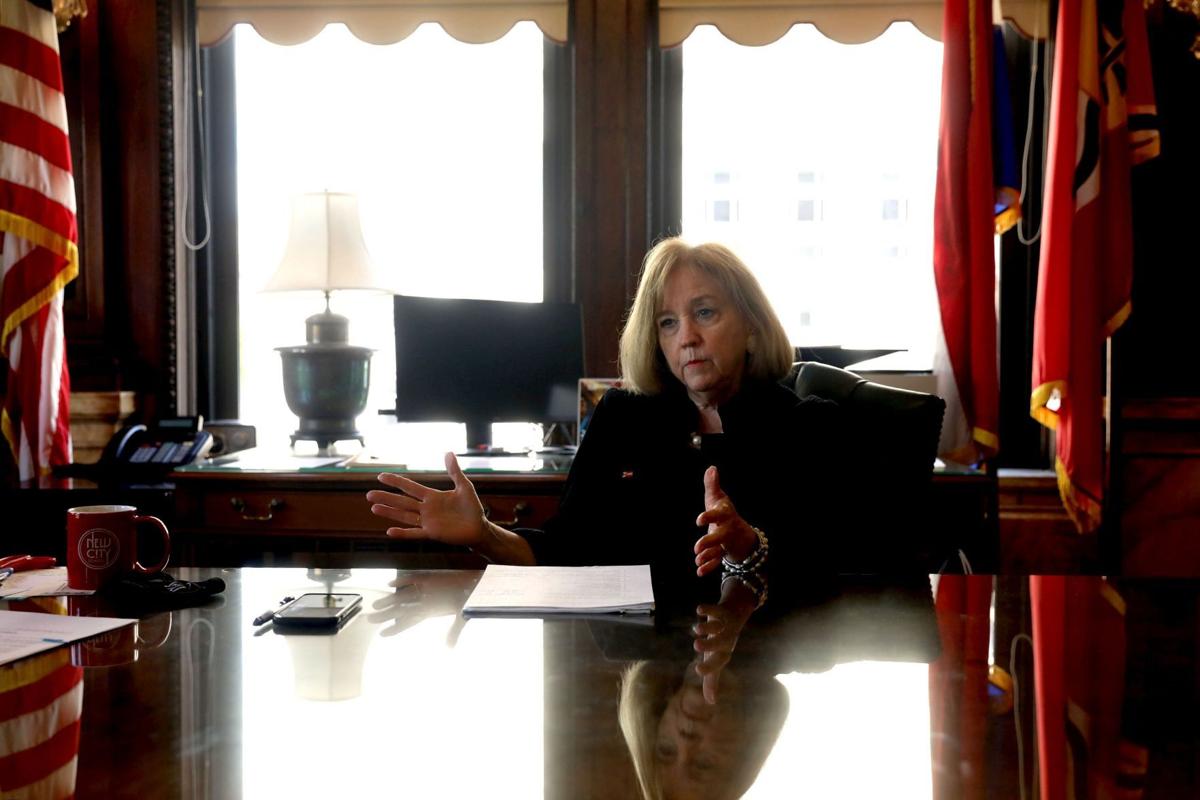 St. Louis Mayor Lyda Krewson reflects on her four year term during an exit interview with the St. Louis Post-Dispatch on Thursday, April 15, 2021. Krewson was the first female to win the office. Photo by Laurie Skrivan, lskrivan@post-dispatch.com 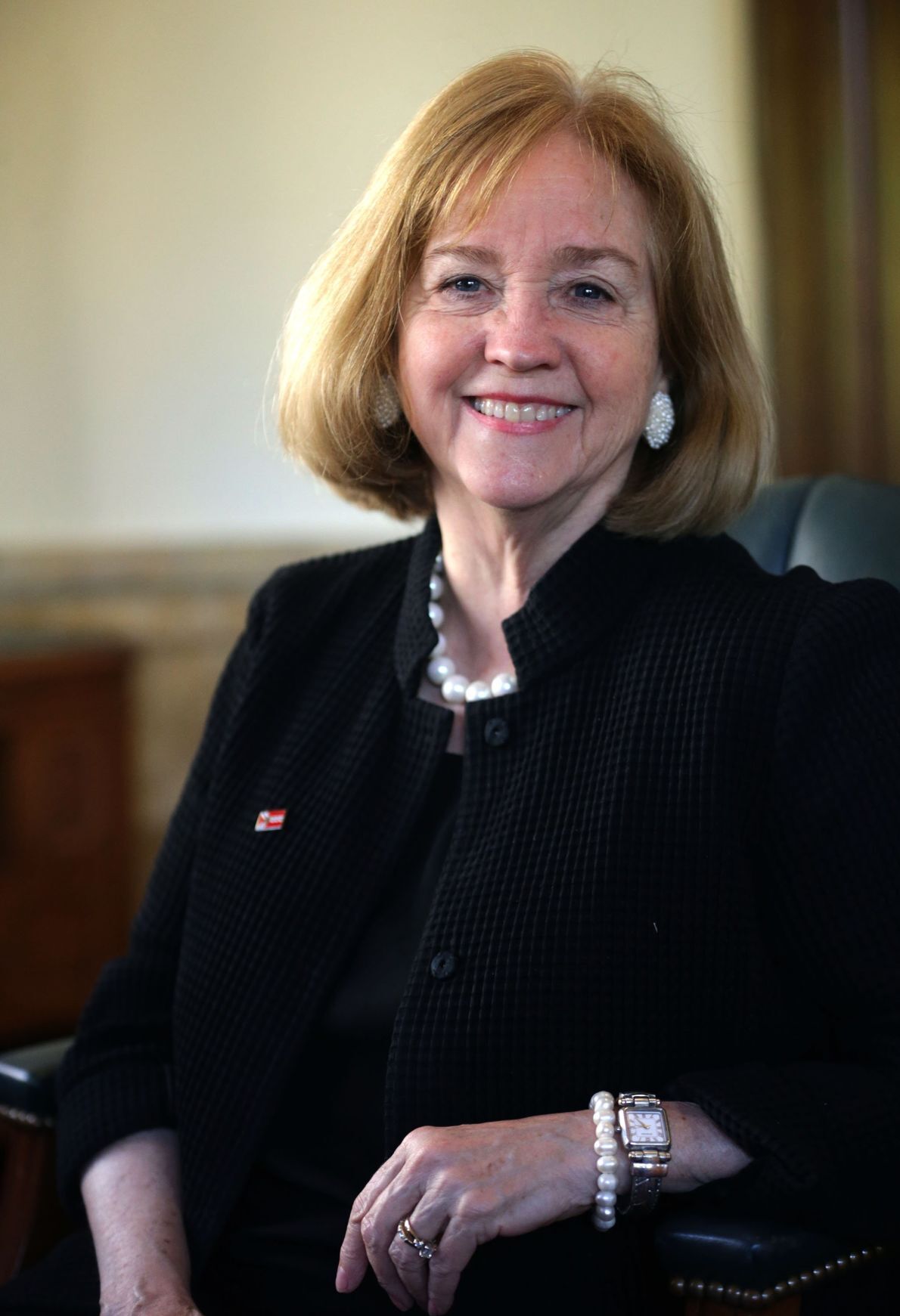 St. Louis Mayor Lyda Krewson sits for a portrait during an exit interview with the St. Louis Post-Dispatch on Thursday, April 15, 2021. Krewson was the first female to win the office. Photo by Laurie Skrivan, lskrivan@post-dispatch.com