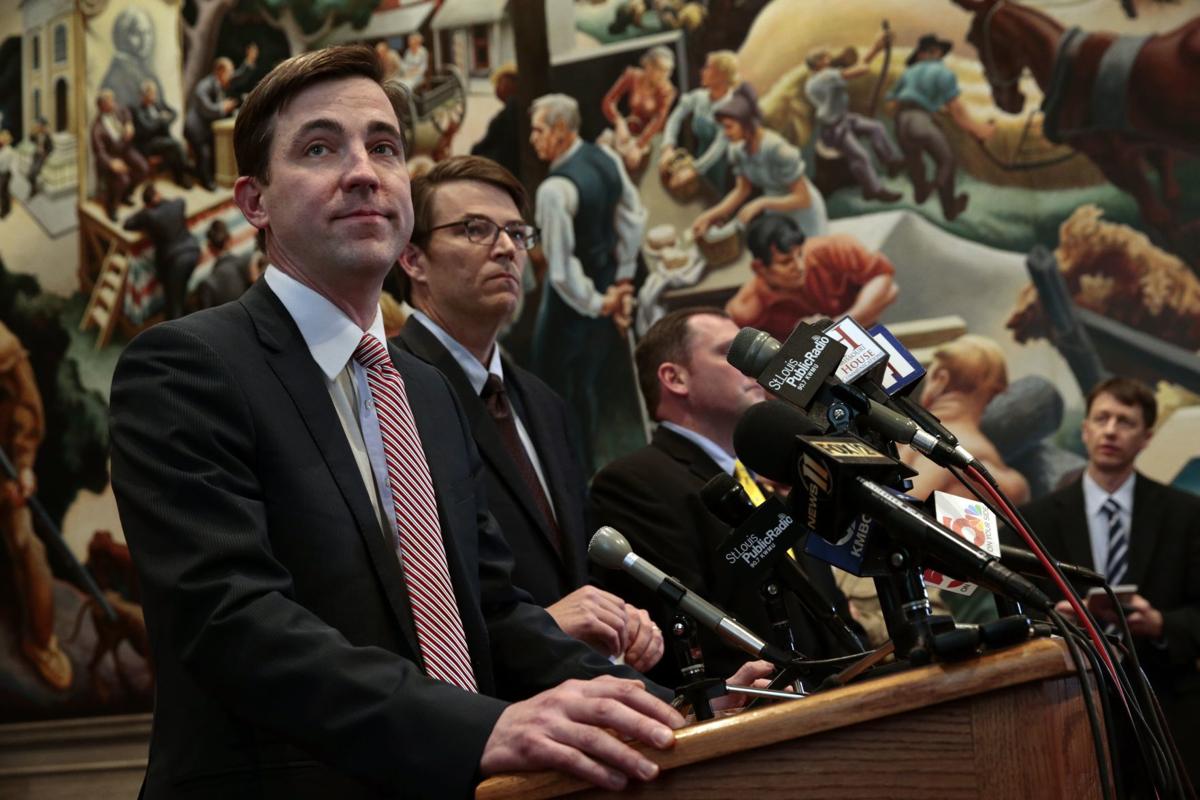 Missouri State Rep. Jay Barnes (left) speaks alongside House Speaker Todd Richardson at a press conference where it was announced that a committee has been formed to investigate the indictment of Gov. Eric Greitens on Monday, Feb. 26, 2018. Photo by Robert Cohen, rcohen@post-dispatch.com 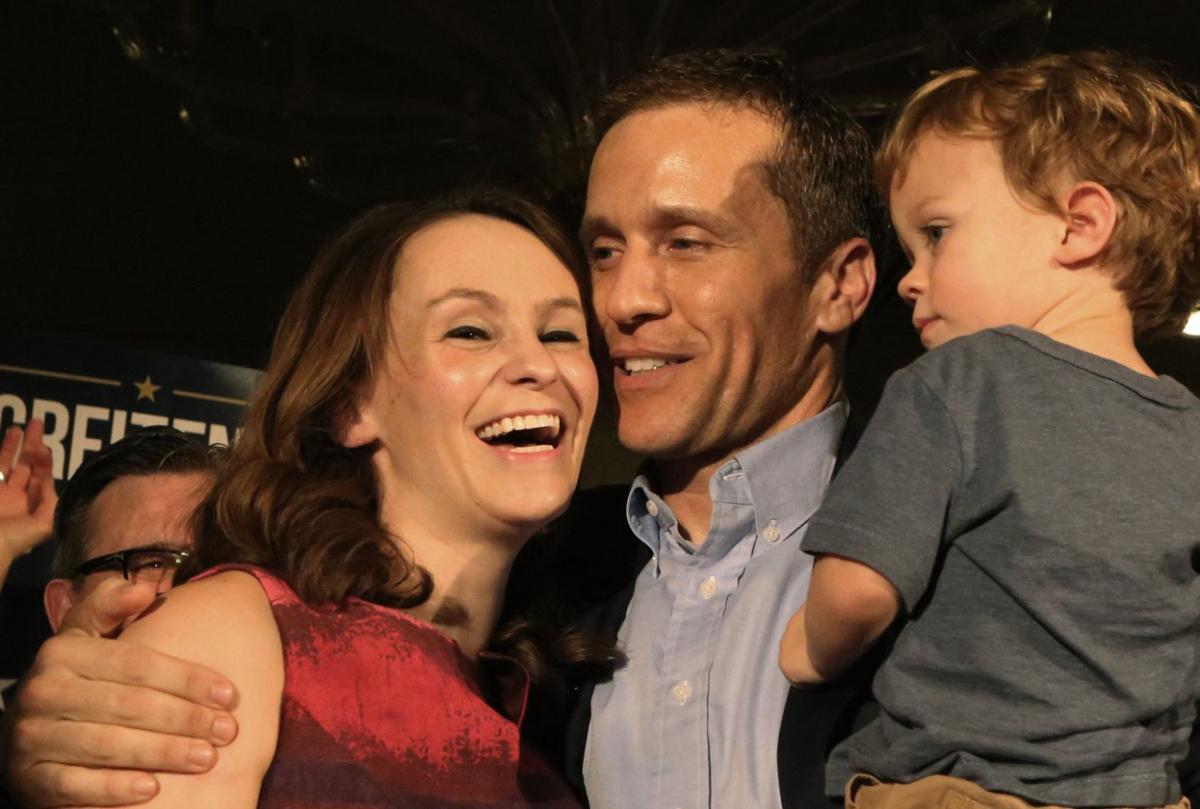 Eric Grietens with his family on Tuesday, August 2, 2016, at Eric Greitens watch party at the Doubletree Hotel in Chesterfield, after he was declared the winner in the Republican Governor primaries. With him is his wife, Sheena, and his son, Joshua, 2. Photo by J.B. Forbes, jforbes@post-dispatch.com

JEFFERSON CITY • The chairman of a special committee investigating Gov. Eric Greitens offered an emphatic “no” Wednesday when asked if he was planning to delay the release of the panel’s findings next week.

Rep. Jay Barnes’ response came a day after a letter surfaced from the governor’s legal team that requested that the legislative committee keep its work under wraps until the conclusion of the separate criminal trial against Greitens.

“The committee is on track,” said Barnes, R-Jefferson City, after a closed-door meeting of the panel in the Capitol.

With a jury trial set to begin May 14 in St. Louis, Greitens’ attorneys say the information contained in the legislative report could taint the potential jury pool in the felony invasion of privacy case.

In addition, the letter said the report would “disseminate incomplete, false and misleading information that will cause damage to entirely innocent people, some of whom are families and children.”

Greitens lawyers say investigator lied and may be withholding documents

The letter, first reported by the Kansas City Star, says the governor is willing to provide testimony to the committee, but only after the trial concludes.

Among those signing the March 26 request was Washington-based attorney Ross Garber, who has defended three other governors facing impeachment proceedings, including Robert Bentley of Alabama, Mark Sanford of South Carolina and John Rowland of Connecticut.

Garber is being paid by the state to defend the office of the governor in legal proceedings. He is not involved in Greitens’ criminal defense, he said.

Garber’s hiring also did not go through the normal channels, in which the attorney general’s office typically plays a role.

“The attorney general’s office has not received a request ... and we have not authorized that,” said Loree Anne Paradise, a spokeswoman for Attorney General Josh Hawley.

Other signees were Lucinda Luetkemeyer, the governor’s taxpayer-paid general counsel, and private attorney Edward Dowd, who is being paid by Greitens to defend him in the criminal trial.

Garber said he was hired to help navigate the legal questions that come when a legislative body investigates the executive branch. He said he was charging the state half his normal rate.

In the letter, the attorneys argue that release of the final report before the trial is held will “cause disruption of the legislative session and confusion among legislators who will be justifiably perplexed as to what, if any, action they should take based on an incomplete and inaccurate report.”

In urging for a delay, the letter points out that the extramarital affair took place in 2015, before Greitens had formally announced his successful bid for office.

“The matters being investigated by the Committee are not urgent, nor, for that matter, are they matters directly related to the continued functioning of state government,” the letter says.

Greitens, a Republican, was indicted in February for allegedly taking and transmitting a nonconsensual photo of his partly nude lover in the basement of his former home in St. Louis’ Central West End.

Greitens has denied the charge, refused to resign and has hired a legal team to defend himself in the prosecution being headed up by St. Louis Circuit Attorney Kim Gardner, a Democrat. However, he has pointedly declined to say whether he took the photograph in question.

The legislative committee has been meeting privately since it was formed by the House in February as a precursor to the governor’s potential impeachment.

The committee, which consists of five Republicans and two Democrats, is set to deliver its report to House Speaker Todd Richardson on Monday.

Richardson is expected to provide additional details about the release of the report when he addresses reporters Thursday.

The $7.1 million project, which will use funds from Missouri's new gas tax, aims to to lessen flooding pitfalls and improve traffic safety.

In first round of ads in race for Missouri Senate seat, Hartzler takes jabs at Schmitt, Greitens

The five-figure ad buy is set to run statewide, including in St. Louis.

Missouri State Rep. Jay Barnes (left) speaks alongside House Speaker Todd Richardson at a press conference where it was announced that a committee has been formed to investigate the indictment of Gov. Eric Greitens on Monday, Feb. 26, 2018. Photo by Robert Cohen, rcohen@post-dispatch.com

Eric Grietens with his family on Tuesday, August 2, 2016, at Eric Greitens watch party at the Doubletree Hotel in Chesterfield, after he was declared the winner in the Republican Governor primaries. With him is his wife, Sheena, and his son, Joshua, 2. Photo by J.B. Forbes, jforbes@post-dispatch.com