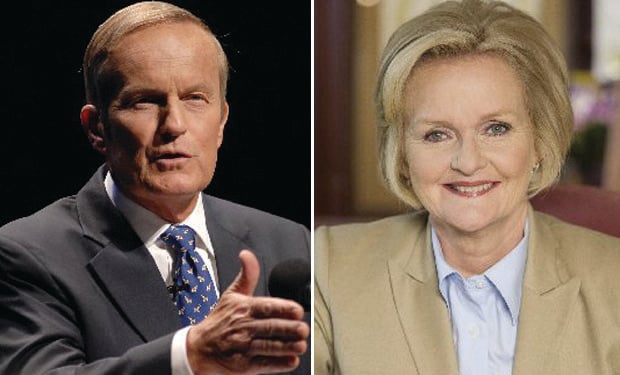 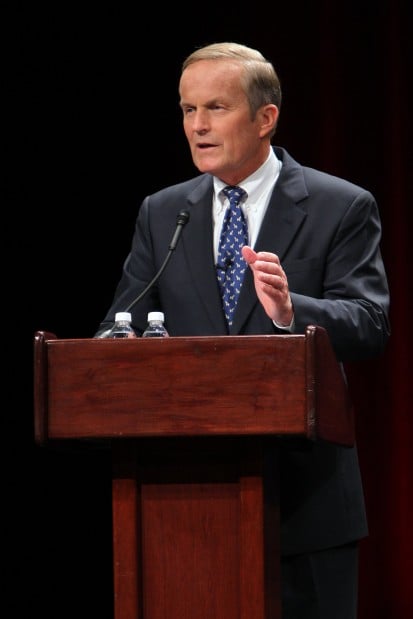 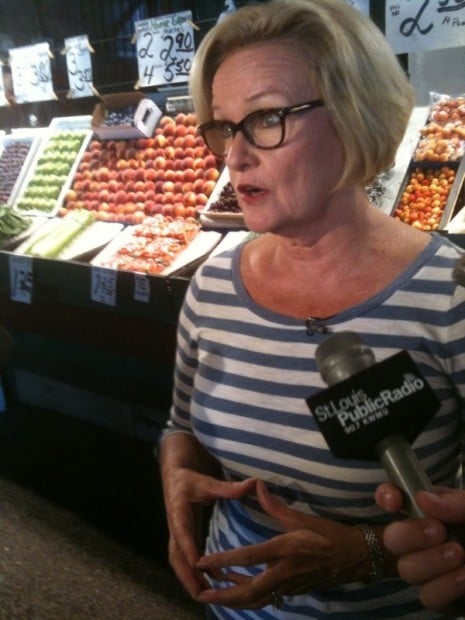 U.S. Sen. Claire McCaskill, D-Mo., talks to reporters at Soulard Farmer's Market Wednesday, touting her support of a federal farm bill and criticizing her Republican challenger, U.S. Rep. Todd Akin, for opposing it in the past.

In recent weeks, both candidates in Missouri's fast-changing U.S. Senate race have fashioned themselves as outsiders willing to go against their own party's establishment.

Each is doing it with different English. Akin is running to the right, saying he won't compromise on his bedrock conservative principles. McCaskill is running to the middle, saying, "I wear the term 'moderate' on my sleeve."

McCaskill's new television ad, released Friday, is emblematic of her political playbook. It doubles down on her self described "Missouri-style independence."

"All senators are ranked 1 to 100, liberal to conservative," McCaskill said. "You're looking at Number 50. How did I get there? Missouri-style independence. Votes to cap federal spending, against more regulations and eliminating earmarks. I work across the aisle, and I don't think compromise is a dirty word."

McCaskill, 59, who was Missouri's auditor before beating incumbent Sen. Jim Talent in 2006, on Friday spoke to the St. Louis' Regional Chamber and Growth Association, a buttoned-down, conservative-minded business group. She hammered home her independent theme, proclaiming, "I'm proud of my bipartisanship." The night before, McCaskill watched the Democratic National Convention from afar at a St. Louis movie theater.

Missourians have long embraced independence as part of their brand. In 1948, Democratic Party bosses sought to replace incumbent President Harry Truman, who ironically lived in a Missouri town called Independence, on the ballot with a variety of other "better" candidates, including Gen. Dwight Eisenhower. Truman defied them, adopting a go-it-alone persona that defined his legacy.

Akin is running a sort-of guerilla-style campaign, fighting a party leadership that has repeatedly asked him to step aside after he declared that women can biologically prevent pregnancy after a "legitimate rape." Akin has apologized. But he is unapologetic for his firm anti-abortion views.

Akin, 65, was elected to Missouri's 2nd Congressional District in 2000 after serving in the statehouse. He has increasingly lampooned powerful GOP leaders who pulled financial support from the candidate while saying he can't win. On Twitter, Akin refers to his independence from "party bosses," often making his campaign sound like a rebellion.

"The Party Bosses attacked our campaign but conservative leaders responded with their overwhelming support," Akin wrote on Wednesday.

But Akin's lost funding may have had some impact. NBC television affiliate KOMU, in Columbia, Mo., said Friday it pulled Akin's television ad buy for failure to pay. KSDK, the NBC affiliate in St. Louis, reported that Akin's last commercial ran on the station Wednesday and that he has stopped buying commercial time.

Akin's campaign manager and son, Perry Akin, denied the claim in a brash press release: "This story is simply false. Our television buyers have paid for every ad that has aired and even bought more ad time today. A political campaign, like an advertiser, makes constant decisions about where and when we want our ads to air. This is standard practice in campaigns across the country. Unfortunately, a particular television station decided to twist the facts and created a story that is simply untrue.

"However," the statement continued, "we will not be doing any more business with KOMU-TV because they have lied."

Akin reports to have raised $400,000 over the last 20 days, often in small donations from loyal conservative donors.

The strategy of focusing on Akin's loyal base will serve as a litmus test for Missouri in the general election. Political scientists say the race will show how conservative Missouri really is.

Those numbers help cement McCaskill's focus on the middle. She is campaigning with a message saying Akin is "too conservative for Missouri" and highlighting his past comments, such as his comparing of federal student loans to stage 3 cancer.

But the Missouri Republican Party says McCaskill isn't the mainstream moderate she claims to be.

"Only in Washington can you vote 95 percent of the time with Barack Obama and still have the gall to consider yourself a moderate," said Lloyd Smith, the Missouri GOP's executive director.

No matter how many times Todd Akin tells people he's staying in the Senate race, the question keeps popping up.

Missouri congressman is a hot topic in Charlotte.

U.S. Sen. Claire McCaskill, D-Mo., talks to reporters at Soulard Farmer's Market Wednesday, touting her support of a federal farm bill and criticizing her Republican challenger, U.S. Rep. Todd Akin, for opposing it in the past.