An Air Evac Lifeteam helicopter lifts off at Mercy Hospital Lincoln in Troy, Mo., for a short flight on March 9. Photo by Robert Cohen, rcohen@post-dispatch.com 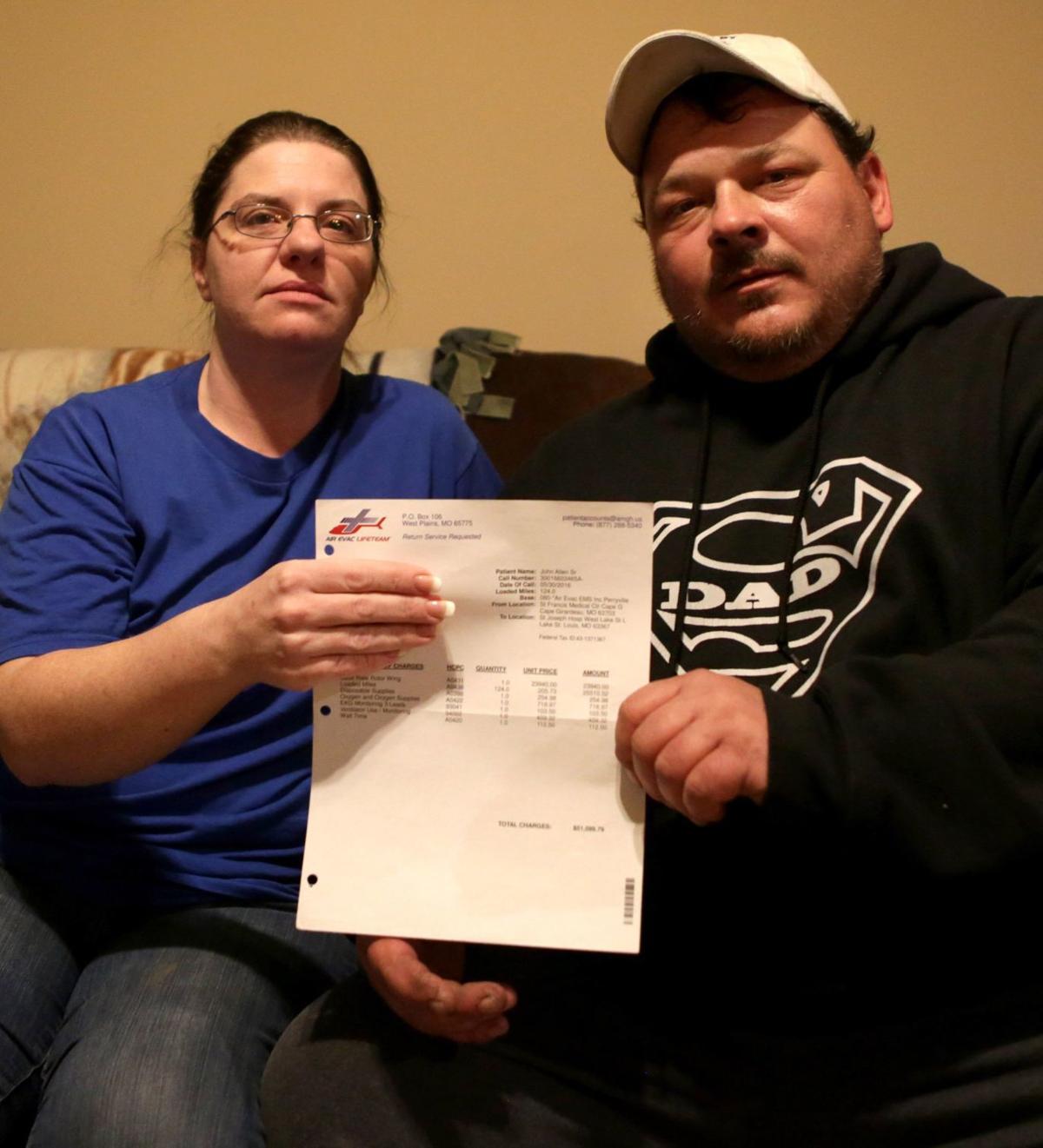 Jennifer and John Allen sit for a portrait with a copy of John's Air Evac Lifeteam medical bill, Tuesday, April 17, 2018, at their Warrenton home. John was airlifted from a Cape Girardeau hospital to SSM Health St. Joseph Hospital in Lake Saint Louis in 2016 while the family was on a camping trip. The $51,099.79 bill was denied by their insurance company, Anthem BlueCross BlueShield entirely. The family is in the process of appealing the decision. Photo by Nikos Frazier, nfrazier@post-dispatch.com 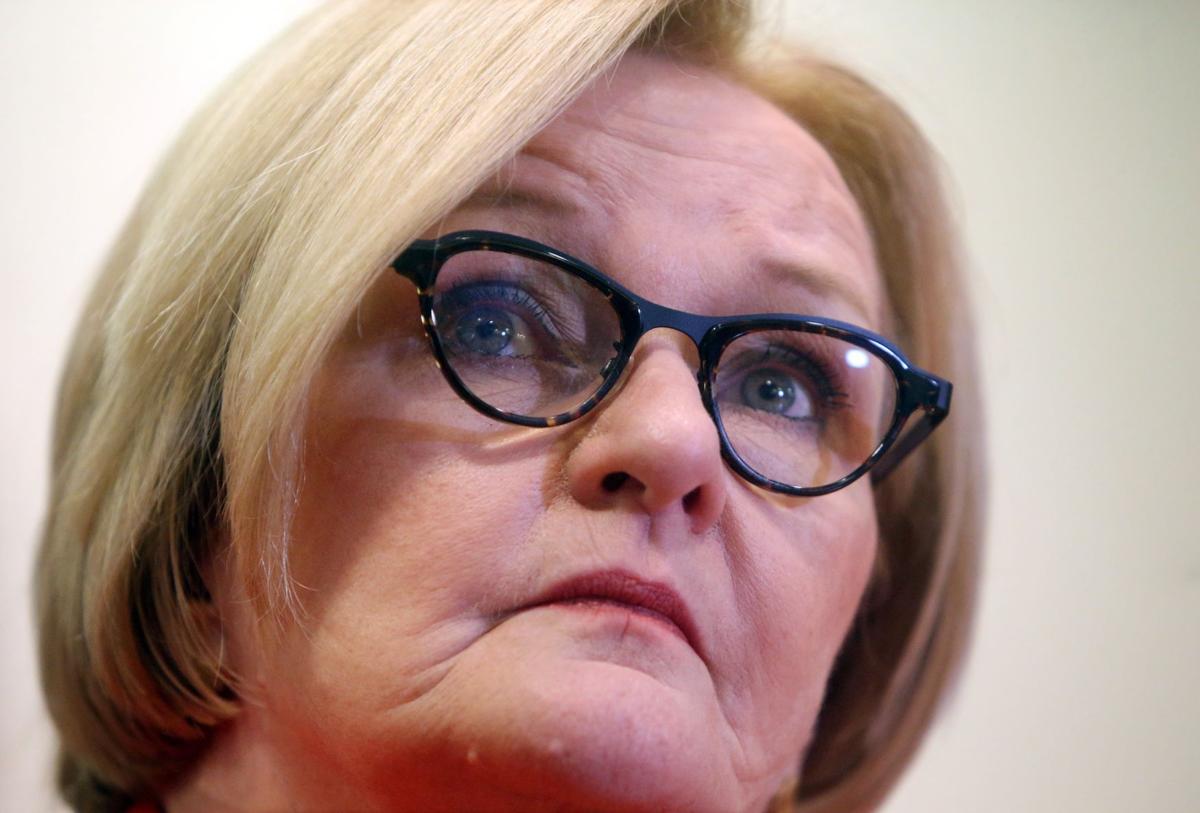 She’s asking nine different companies for information, including their billing practices and a list of air ambulances that operate in-network, according to the letters provided to the Post-Dispatch. She’s asking the companies to respond by May 21.

Ben Millheim fractured his skull after falling about 13 feet during a camping trip with family and friends in the fall of 2016. His family is …

“A recent series of articles by the St. Louis Post-Dispatch highlighted the costs being passed along to consumers through the practice of balance billing by providers of air ambulance service,” McCaskill writes.

In March, the Post-Dispatch wrote about a boy who fractured his skull in rural Missouri in 2016. Ben Millheim, who is now 8, survived but his family is stuck with a bill of more than $32,000. The Post-Dispatch heard from more Missourians with hefty air ambulance bills after it published the Millheims’ story.

After the Post-Dispatch wrote about a south St. Louis County family's $32,000 air ambulance bill, the paper heard from more Missourians in similar positions.

“This financial burden being placed on insured consumers appears to be driven in large part by the inability or unwillingness of some private health insurance providers and air ambulance providers to agree on terms for reimbursement,” McCaskill writes.

To better understand industry practices and how they affect Missourians, McCaskill, in letters dated April 30, has asked air ambulance companies for:

• A complete list of locations in Missouri, including the number and type of aircraft per location.

• The number of flights operated in Missouri in 2017, including those by a contractor.

• A list of health insurance providers that are considered in-network.

• A summary of Missouri patients who received a bill in 2017 that was denied payment in whole or in part by an insurance provider; total number of bills issued, average charge per bill and the number of bills that remain unpaid.

• Any documentation provided to patients who wish to challenge or appeal a charge.

• Any documentation provided to patients informing them how to file a complaint related to air ambulance service or billing with state and federal regulators.

McCaskill has asked similar questions of the insurance companies, including:

• Any documents that detail policies regarding air ambulance coverage, including any limitations on coverage.

• A summary of how many air ambulance claims were processed in 2017, and a breakdown of how many were denied in part or in whole.

• Documentation provided to patients who wish to appeal or challenge a claim.

• Documentation provided to patients informing them how to file a complaint with state or federal regulators.

The state of Missouri spent $3.6 million on 2,897 air ambulance transports for its Medicaid recipients in fiscal year 2016.

One state legislator said efforts to fix the air ambulance billing issues are alive in the Capitol.

The Senate recently passed a bill that aims to protect patients from surprise bills when they unexpectedly receive out-of-network care.

Senate Insurance Committee chairman Paul Wieland, R-Imperial, told reporters Thursday during a news conference that he’s hoping to add an amendment that would tackle out-of-network air ambulance issues, too. The House is expected to take up the bill this week, but Wieland admits it is a difficult issue to solve.

“But that’s a lot stickier of an issue because we’re talking about a lot bigger dollars and there’s less incentive for the air-evac companies to come to the table. Because right now they can charge what they want and they’re protected under federal legislation to a certain extent,” Wieland said Thursday.

On the same day Wieland made his comments, one air ambulance company, O’Fallon-based Air Evac Lifeteam, hired a new team of lobbyists, from Gamble and Schlemeier, according to records from the Missouri Ethics Commission.

On Friday, the U.S. House passed a deal that reauthorizes the Federal Aviation Administration, which provides funding for five years. A section of the bill could change the way air ambulances are regulated.

Right now, air ambulances are considered air carriers under federal law. And states are barred from regulating the price or routes of air carriers, which includes air ambulances, under the Airline Deregulation Act of 1978.

The language in the FAA reauthorization bill would require air ambulance providers to clearly separate the charges associated with the flight versus the medical services provided on board.

That would allow states to regulate the prices and services of the medical part of the flight.

“The bill is promising because it opens the door to state regulation of part of the air ambulance bill. But it remains to be seen how it will play out in practice,” Brown said.

Representatives from the air ambulance industry say it would set up a situation where, “An insurer would say, ‘We’re not going to cover the transport but we’ll cover the care,’” said Carter Johnson, spokesman for SOAR, a group that supports the air medical evacuation industry.

It would allow each state to craft different laws and regulations, which would be difficult for air ambulance companies to navigate because the aircraft cross borders frequently, Johnson said.

Kurt Erickson and Jack Suntrup of the Post-Dispatch contributed to this report.

Reporter Samantha Liss is focusing on medical costs. Do you have a bill that you consider excessive? You can contact her at sliss@post-dispatch.com for possible use in a future story.

Consumers have been left owing tens of thousands after medical emergencies.

A problem some Republicans and Democrats are uniting to solve: Curbing surprise medical bills

The recent declaration by President Donald Trump that taming unexpected medical bills would be a top priority for his administration echoed through the halls of Congress.

An Air Evac Lifeteam helicopter lifts off at Mercy Hospital Lincoln in Troy, Mo., for a short flight on March 9. Photo by Robert Cohen, rcohen@post-dispatch.com

Jennifer and John Allen sit for a portrait with a copy of John's Air Evac Lifeteam medical bill, Tuesday, April 17, 2018, at their Warrenton home. John was airlifted from a Cape Girardeau hospital to SSM Health St. Joseph Hospital in Lake Saint Louis in 2016 while the family was on a camping trip. The $51,099.79 bill was denied by their insurance company, Anthem BlueCross BlueShield entirely. The family is in the process of appealing the decision. Photo by Nikos Frazier, nfrazier@post-dispatch.com