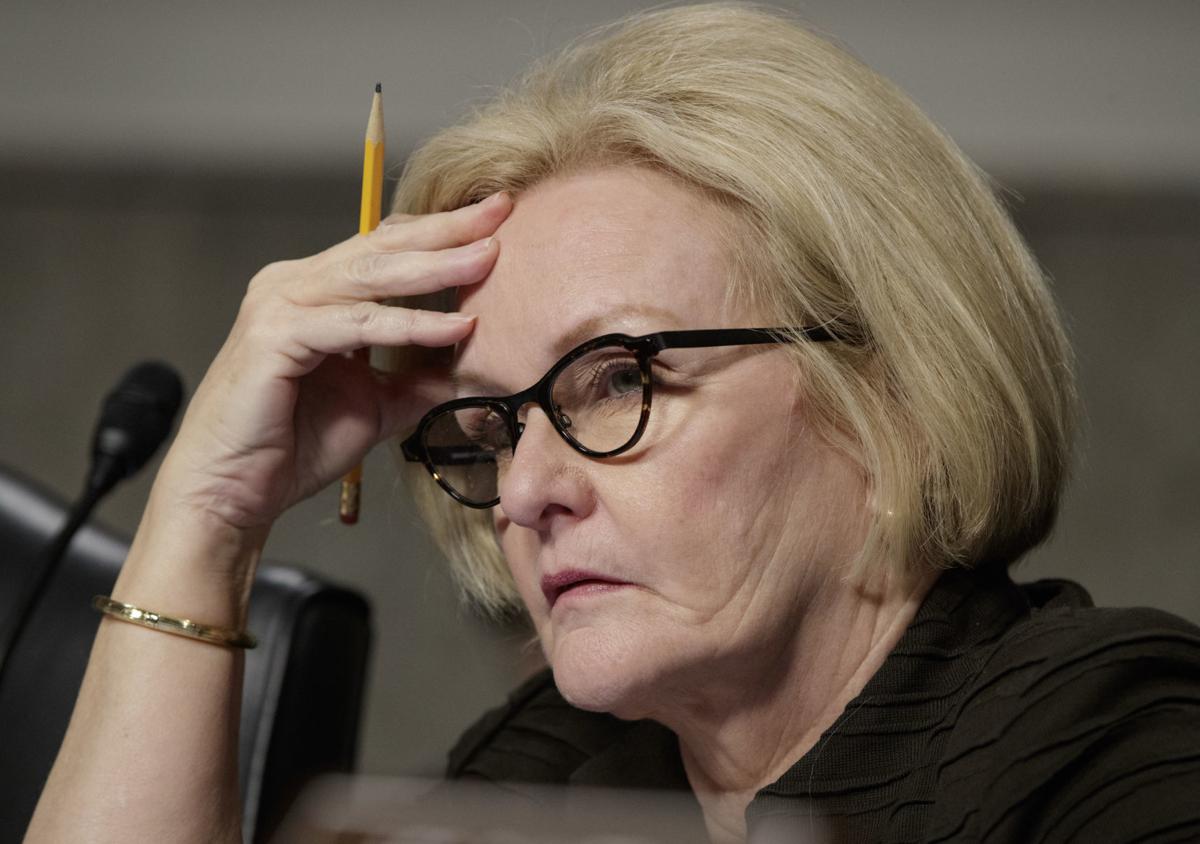 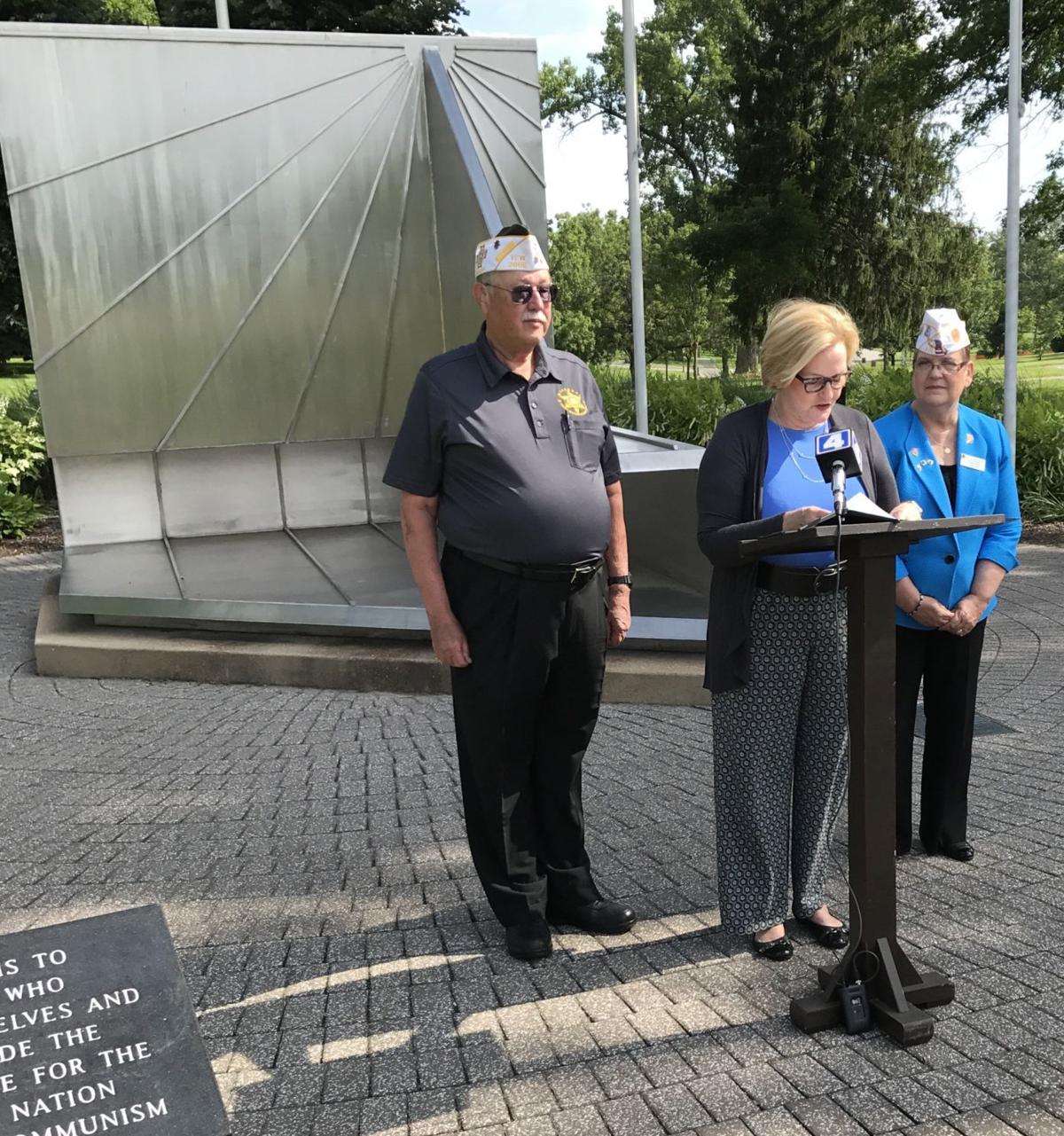 Sen. Claire McCaskill stands by veterans Betty Gonzales and George Newell in front of the Korean War Memorial in Forest Park on May 26, 2017, as she announces survey results indicating increased satisfaction in Missouri's VA services.

WASHINGTON • Sen. Claire McCaskill paid more than $15,000 out of her own pocket to bring Senate Democratic Leader Chuck Schumer and Sen. Jon Tester, D-Mont., and their spouses, along on a McCaskill family and friends vacation to Cancun, Mexico, last year, according to financial disclosure forms filed by Schumer and Tester.

“This was a family birthday celebration with family and personal friends, including colleagues, and the trip was publicly disclosed per Senate guidelines,” McCaskill spokesman John LaBombard said Tuesday.

According to Tester’s 2016 financial disclosure forms, which were filed this month, the trip took place from Feb. 19-22 last year. McCaskill spent $7,410 for Tester and his wife, Sharla, to join McCaskill’s party in Cancun.

McCaskill did not have to report her own costs for the trip because they are not required under Senate financial disclosure rules.

Like McCaskill, Tester — who was head of the Democratic Senatorial Campaign Committee at the time — faces a potentially tough election next year. The two are known as personal friends, and McCaskill has tweeted that Tester is one of her “best buds.” McCaskill and Schumer are also personal friends.

Republicans in Missouri and elsewhere have pointed out that a “dark money” political committee that Schumer is affiliated with, Majority Forward, has helped put up more than $1 million in radio and TV ads praising McCaskill in Missouri this spring.

McCaskill last week called for Missourians to disregard any ads from groups that don’t have to disclose their donors, including the one affiliated with Schumer. Republicans have mocked her for not calling for those ads to be taken off the air, but McCaskill defenders say such a call could be interpreted as forbidden coordination between a politician and a nonprofit political group funded by anonymous donors.

Now, with the disclosure that Schumer was on the trip paid for by McCaskill, Republicans are referring to Schumer as McCaskill’s “beach buddy” and trying to connect the two events.

“So far, Claire has yet to ask for those ads to come down, despite her purported strong opposition to dark money groups,” National Republican Senatorial Committee spokesman Michael McAdams said. “Makes you wonder, why has Claire stayed silent?”

LaBombard responded: “Claire’s taken the strongest possible step on dark money ads, which is strongly supporting and voting for legislation to force disclosure by these groups. While Republicans have blocked that legislation, she’s called on these groups to disclose their donors, and has told Missourians they should only pay attention to the ads run by candidates.”

He said outside groups have run more ads attacking McCaskill than those defending her have spent so far in this election cycle.

Spokespeople for Tester and Schumer, D-N.Y., did not immediately respond on the record Tuesday.

Members of Congress annually must file financial disclosure forms in which they disclose personal wealth across a broad reporting range. The last major ranking of the wealth of all 535 members of Congress was done by the Capitol Hill newspaper Roll Call in late 2015.

NTK Network first reported that Tester was on the trip, and Politico on Tuesday noted Schumer’s attendance.

McCaskill announced on Feb. 22, 2016, the day that Schumer and Tester said the trip ended, that she had been diagnosed with breast cancer.

Three weeks later, after receiving treatment, she returned to the Senate and full-time work.

A judge has ruled a 2018 law, signed by former Gov. Eric Greitens on his final day in office, is unconstitutional and does not restrict collective bargaining.

Staffers in the city counselor’s office will be assigned tasks that the city health department had wanted to contract with Linda Martinez to handle.

Sen. Claire McCaskill stands by veterans Betty Gonzales and George Newell in front of the Korean War Memorial in Forest Park on May 26, 2017, as she announces survey results indicating increased satisfaction in Missouri's VA services.