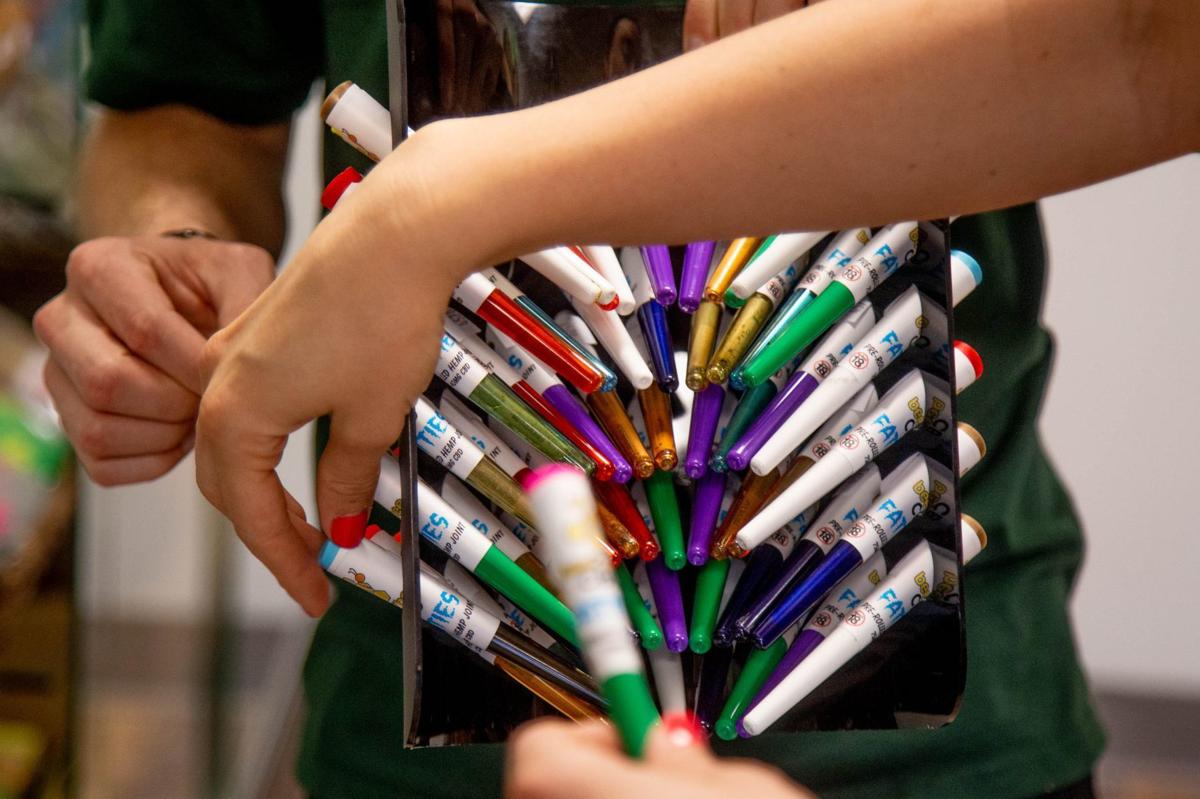 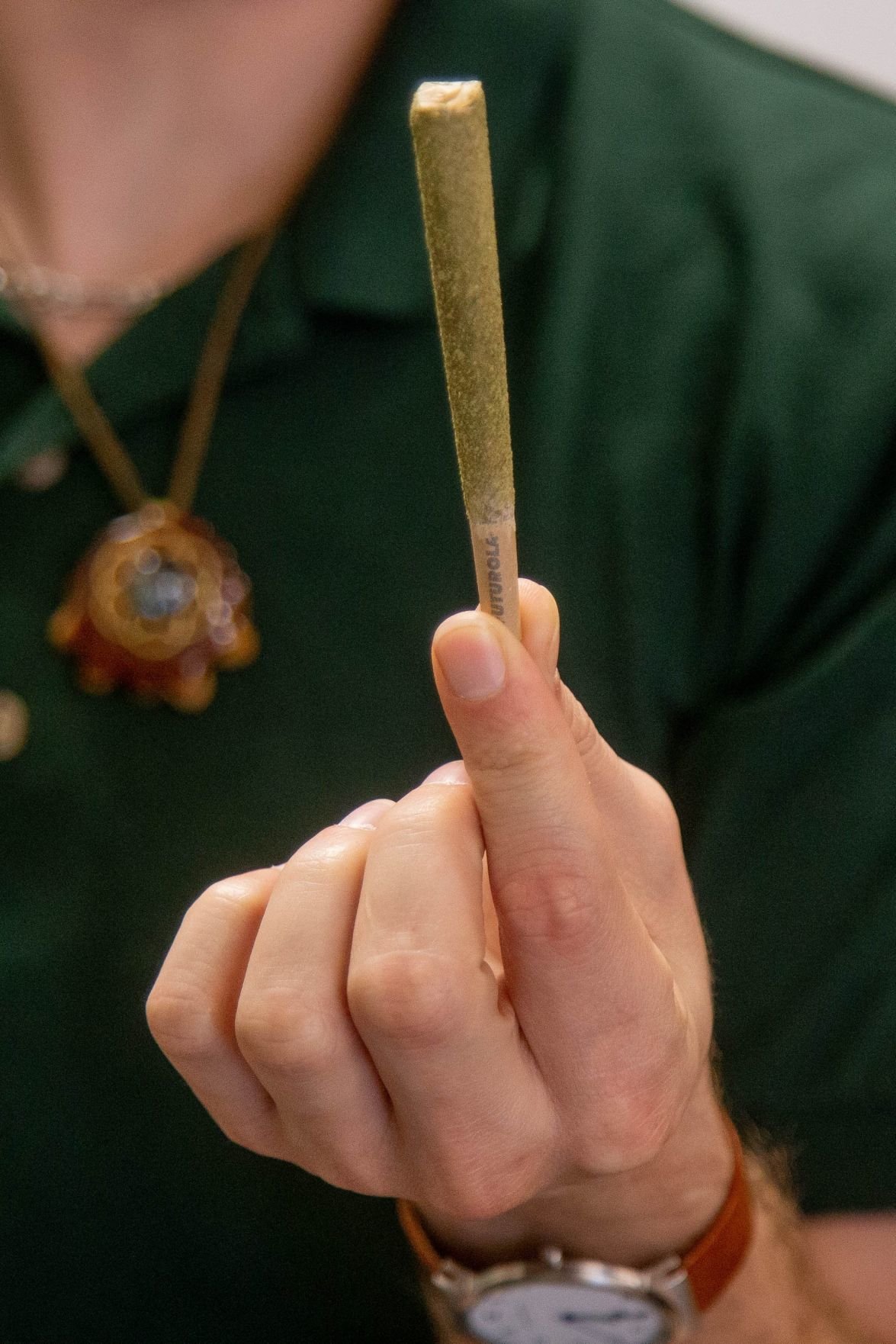 Dylan Kohlfeld, a manager at CBD Kratom, holds up a CBD joint on Thursday, June 27, 2019, at the CBD Kratom shop in Sunset Hills. Photo by Brian Munoz, bmunoz@post-dispatch.com 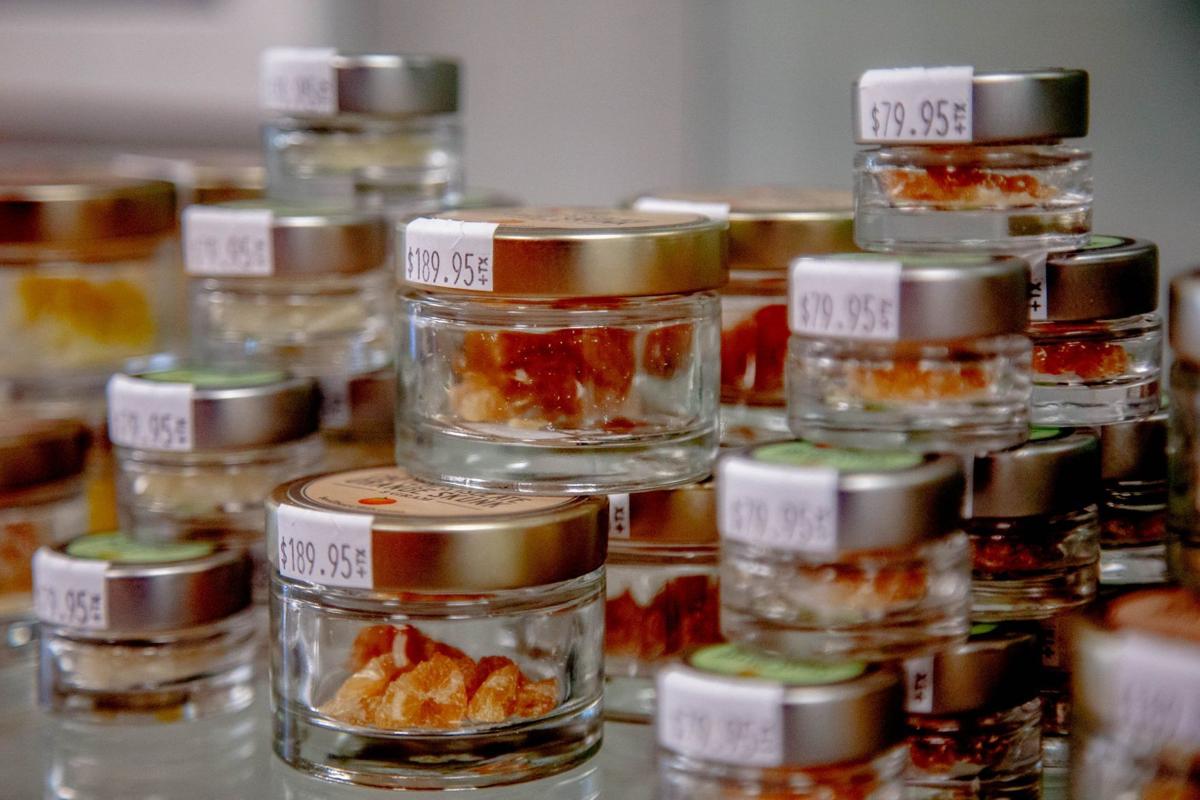 According to documents obtained by the Post-Dispatch, former Missouri Department of Revenue Director Joel Walters asked Attorney General Eric Schmitt for an opinion in March on whether the department could issue sales tax licenses to businesses selling the substance, which is an extract of hemp.

Walters, who left the agency later that month, suggested that retail sale of CBD products might not be legal based on a 2014 law that allowed the Missouri Department of Agriculture to contract with two businesses to cultivate hemp and extract hemp oil.

Under that law, the oil was to be sold only to individuals who required it as a treatment for epilepsy.

Therefore, Walters reasoned, if a store is selling CBD oil not associated with the parameters of the 2014 law, how can it be legally licensed by his department?

“As the retail sale of CBD oil and CBD oil-infused products may be illegal, an entity intending on selling these products could be doing so illegally,” Walters wrote in a memo.

“The Missouri Department of Revenue has not formed an opinion on this issue because of the inconsistent and uncertain nature of the information provided to the department. This issue reveals differing opinions between multiple agencies and at this time, a proper legal opinion cannot be formed without the assistance of the Attorney General’s office,” Walters added.

Unlike other requests to Schmitt’s office for legal opinions, which are typically handled within 90 days, the attorney general’s office decided not to make this opinion public.

The opinion is not subject to disclosure under the state’s Sunshine Law, which Schmitt is charged with enforcing, spokesman Chris Nuelle told the Post-Dispatch this week.

The Department of Revenue also did not release the opinion.

The outcome of the exchange between Schmitt and the agency, however, has created an environment in which businesses selling CBD oil can get a sales tax license as long as they don’t say they are selling it.

“However, the department may have issued new sales tax licenses to businesses that made no mention of CBD oil in their sales tax registration application,” Moy said.

The department’s stance comes as the number of stores dedicated to the sale of CBD has surged across the state, including more than 20 retailers opening in the St. Louis area in the last three years.

CBD, short for cannabidiol, is an active compound in cannabis. CBD can’t get you high, but it’s become popular for its purported health benefits in treating anxiety and pain.

In 2018, state lawmakers exempted industrial hemp containing less than 0.3% of the psychoactive ingredient THC from the definition of marijuana and the state list of controlled substances. But it’s not clear whether that applies to CBD, which can be derived from either hemp or marijuana.

In July, Carl Rowley, a lawyer specializing in cannabis law at the Thompson Coburn law firm in St. Louis, told the Post-Dispatch he believes the state law clearly legalized CBD derived from hemp grown in compliance with state law in Missouri.

But, Rowley said there are still risks for sellers.

“Everyone has a different level of risk, but I tell people to get in writing a certification about the source of the CBD to prove in any way you can it came from legal hemp,” he said.

A Missouri law approved this year further loosened the state’s hemp rules. University of Missouri researchers have begun growing the plant, and next year’s growing season will be the first in about a century in which hemp will be widely grown in the state.

Dylan Kohlfeld, a manager at CBD Kratom, holds up a CBD joint on Thursday, June 27, 2019, at the CBD Kratom shop in Sunset Hills. Photo by Brian Munoz, bmunoz@post-dispatch.com