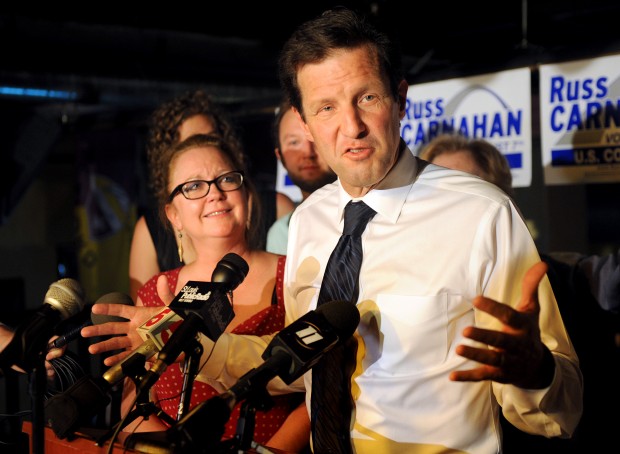 Rep. Russ Carnahan, D-Mo., gives his concession speech at his election party at the Dubliner in St. Louis on Tuesday, Aug. 7, 2012. Carnahan was defeated by Rep. Lacy Clay, D-Mo., for the Democratic nomination in the Missouri's 1st District. Photo by Sid Hastings 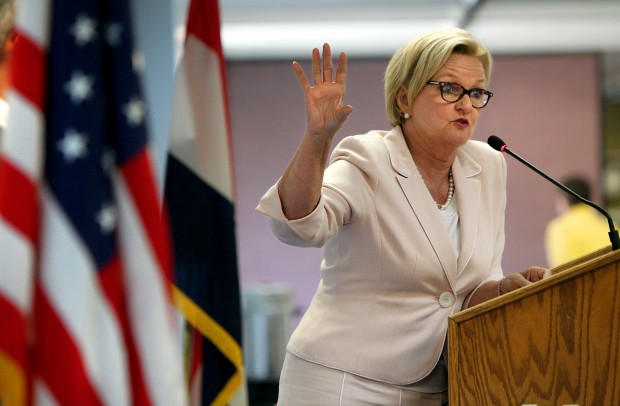 CHARLOTTE, N.C. • Like doctors huddling around a patient, Missouri elected officials, political strategists and rank-and-file delegates cloistered here for the Democratic National Convention are trying to figure out what ails the Missouri Democratic Party.

"I know this is not romantic or sexy work ... (but) the way you win tight elections like this is your ground game," said the operative, Buffy Wicks, speaking to a Missouri delegate breakfast Wednesday at which she was introduced as "Buffy the Republican-Slayer."

Missouri Democrats haven't been slaying many Republicans lately. The party of Truman has fallen on hard times since Obama came within 4,000 votes of denying the state to John McCain in the 2008 presidential election.

This year, Obama has all but conceded Missouri to Republican Mitt Romney, with polls showing Missourians have parted with the president over health care and stimulus spending. In one of those details that only politicos care about, but which is nonetheless telling, Missouri's delegation is in the nosebleed seats at Time Warner Cable Arena, the venue of the Charlotte convention.

True, Democratic Gov. Jay Nixon appears to be in good shape going into his re-election bid. But he has cultivated an image to the right of most of the party, and his political advertising is generally free of the word "Democrat."

Democratic Sen. Claire McCaskill, meanwhile, appeared to be toast until her Republican re-election challenger, Todd Akin, pontificated on "legitimate rape" and abortion and made himself an outcast in his own party. And still McCaskill and other Democrats fear she could be in trouble.

"Do not believe what you read in the newspapers about this election," Robin Carnahan warned delegates earlier this week, saying a "dogfight" is imminent. "We know our state."

Nixon had not yet appeared at the convention as of Wednesday morning, though he was expected to be here to host an evening event. McCaskill won't be here at all, saying she had to remain in Missouri to campaign.

"Is Missouri more conservative?" Koster asked most of Missouri's 102 delegates over breakfast Wednesday. "I think all of us have given that question a lot of thought."

Polls indicate it's almost undebatable. A Mason-Dixon poll for the Post-Dispatch this summer showed Romney leading Obama by 9 percentage points, with Obama's favorability rating at a dismal 34 points. Akin's Senate primary victory, as the most conservative of three Republicans running, was another strong signal.

Delegates in Charlotte, as in conventions past, gather by state each morning, assessing their state party situation over scrambled eggs. Depending on the state and the year, those morning meetings are sometimes friendly reunions with old friends. Other times, they're full of intrigue among a given state's competing political players.

For Missouri this week, the morning meetings have been more like crisis interventions. Speakers to the delegation — most of them from the within the delegation — have climbed the podium in the Mecklenberg Room at the Hilton Charlotte City Center, one after another, to offer advice on the problem and its solution.

The goal is the same, as voiced Wednesday by Koster: "We've got to make sure that the middle of the state begins to turn blue again ... (to) make sure Missouri regains its place in America as a battleground state."

Koster, a former Republican turned Democrat, used his own change of heart as an example of how voters might be turned from the GOP.

There was "literally no braking mechanism on its right extreme, and I was fed up with it," Koster said. The Missouri Republican push to criminalize stem-cell research, he said, "was really the beginning of the end for me."

Koster said recruitment of stronger, unapologetic Democrats in the rural middle of the state will be key to reversing the trend of the past view years that has Missouri more Republican "red" than it used to be.

Koster's opponent, Republican Ed Martin, responded to Koster's comments on Republican extremism by pointing to the pro-choice provisions on the Democratic Party's national platform being approved this week in Charlotte.

"If you want to talk about extremism, the (Democratic) delegates just voted for a platform that is far out of touch with Missouri voters," Martin said. "They don't want tax-funded abortions or abortion on demand."

Robin Carnahan told delegates that this year's elections especially were a "fight between two visions."

"Part of what we have to do as Democrats is tell the story to people," she said, couching it as a fight between middle-class values and "greedy businesses that are just going to extract as much as they can."

"President Romney," Carnahan said at one point, as if to shock delegates, some of whom booed and hissed in response. "It could happen," she warned.

Russ Carnahan cautioned that even McCaskill's race — which she was leading by 9 points in a recent Mason-Dixon poll for the Post-Dispatch after the Akin controversy broke — isn't a done deal, given the possibility of unlimited outside money that could still flow into Missouri for Akin.

"As sure as I'm standing here, I think Todd Akin is going to stay in the race in Missouri, and I think the 'superPAC' groups are going to come in and fund him," Carnahan told delegates. "Sen. McCaskill is still going to have a tough race."

One scenario projected by Democrats is that Republican leaders and financial backers, who have sworn not to support Akin no matter what, will forget that promise once it's clear they're stuck with him on the ballot.

"We'll absolutely see the outside secret PAC groups come in to help Akin," Carnahan said. "Democrats can't do a victory dance in Missouri."

Wicks, the Obama campaign operative, told Missouri delegates to focus their voter-contact efforts on a divide-and-conquer strategy, zeroing in on the contrast between Democratic and Republican views of Africans-Americans, Latinos, young people and, especially, women.

"Quite frankly, Mitt Romney has made it easy or us to show that contrast," she said. But she added: "We need you to dig deep. It is going to be a close election."

Former President Bill Clinton told the audience that his own economic boon also began with a recovery that many Americans didn’t initially feel.

He didn't arrive until Wednesday, one day before the end of the convention.

Carnahan warns that superPACs will make peace with Akin

Congressman cautions delegates at Charlotte convention that it's still a race.

Democrats pondering how to turn back the red tide.

Rep. Russ Carnahan, D-Mo., gives his concession speech at his election party at the Dubliner in St. Louis on Tuesday, Aug. 7, 2012. Carnahan was defeated by Rep. Lacy Clay, D-Mo., for the Democratic nomination in the Missouri's 1st District. Photo by Sid Hastings