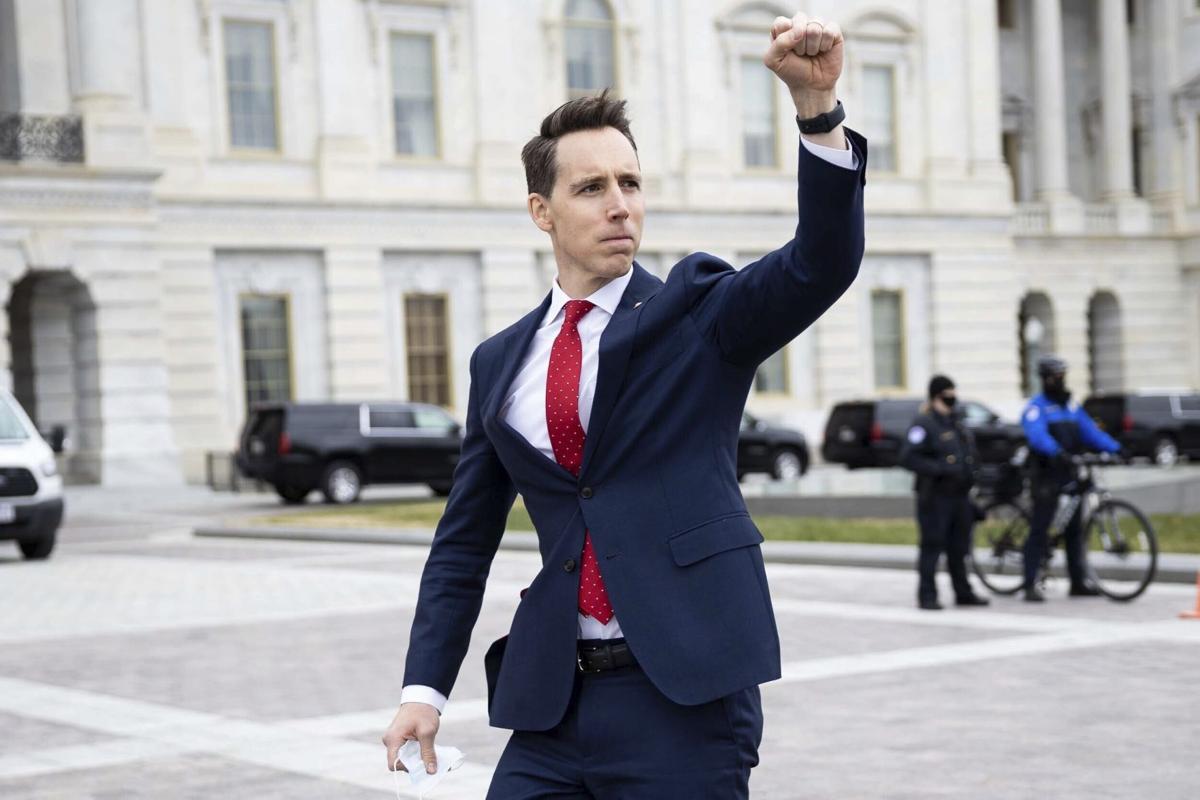 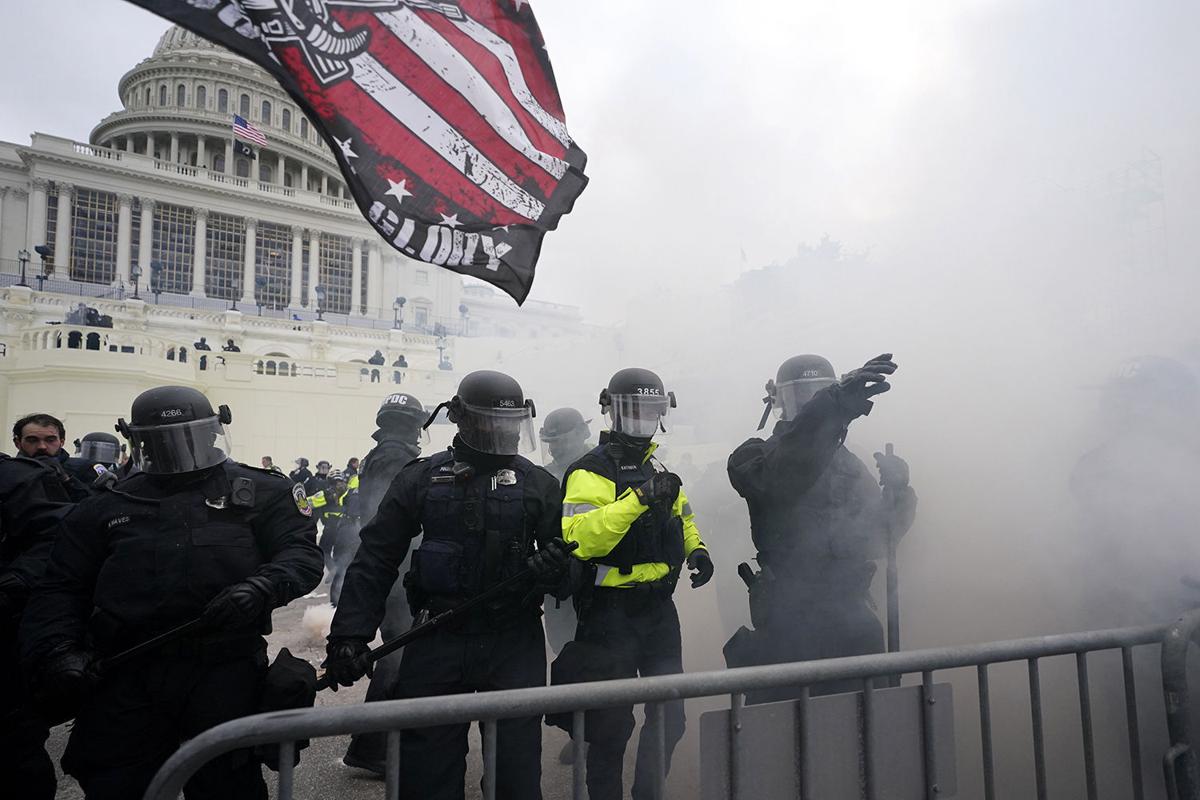 Police hold off Trump supporters who tried to break through a police barrier, Wednesday, Jan. 6, 2021, at the Capitol in Washington. As Congress prepares to affirm President-elect Joe Biden's victory, thousands of people have gathered to show their support for President Donald Trump and his claims of election fraud. (AP Photo/Julio Cortez) 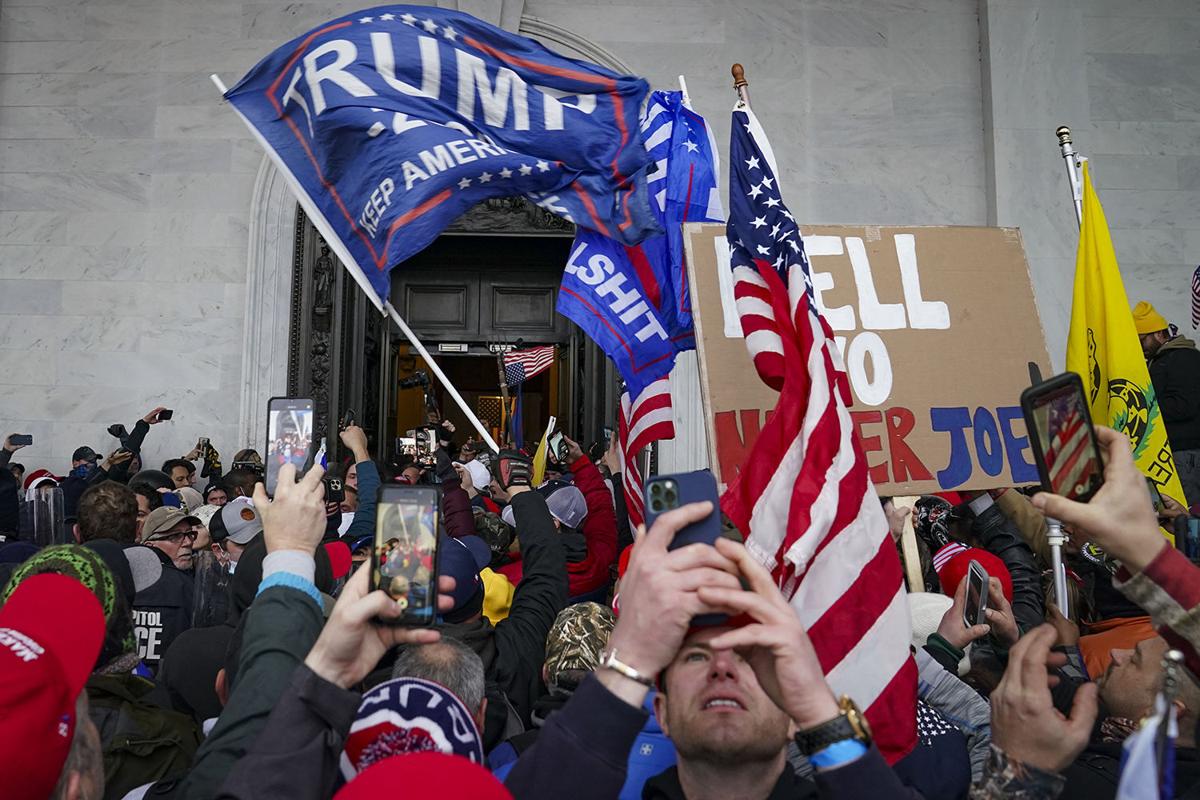 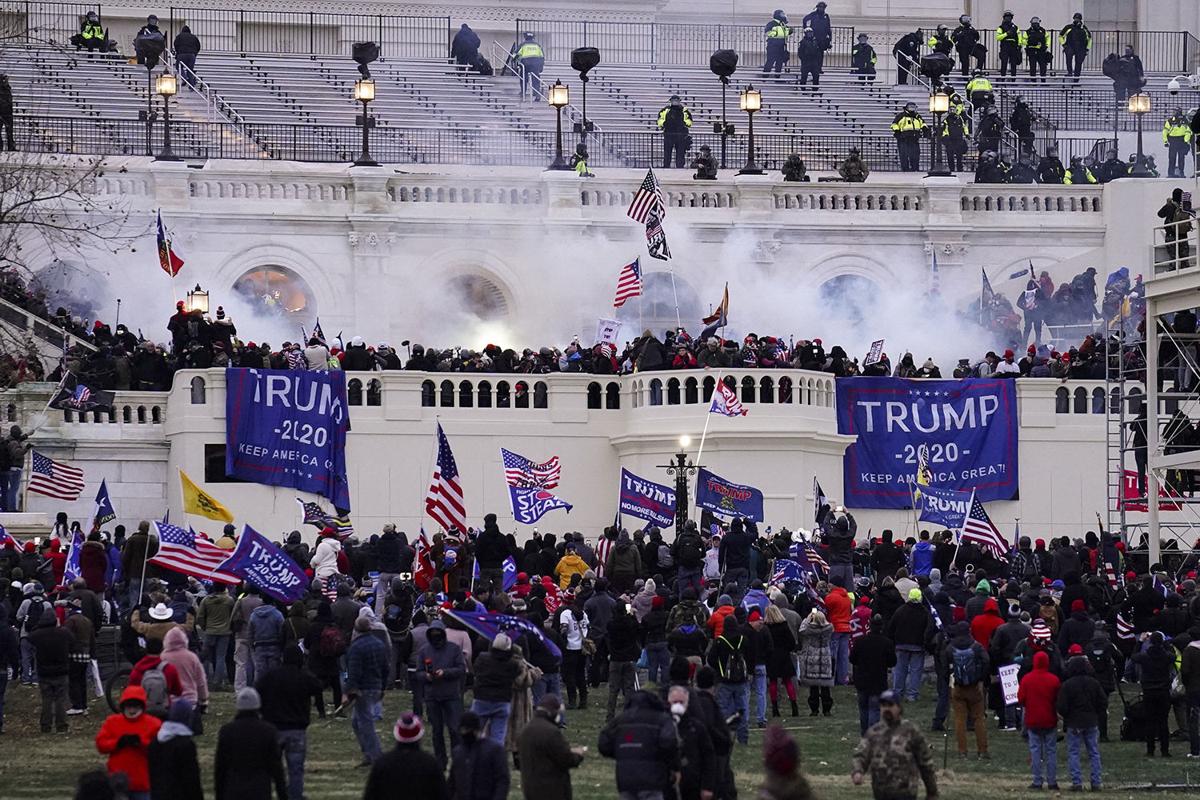 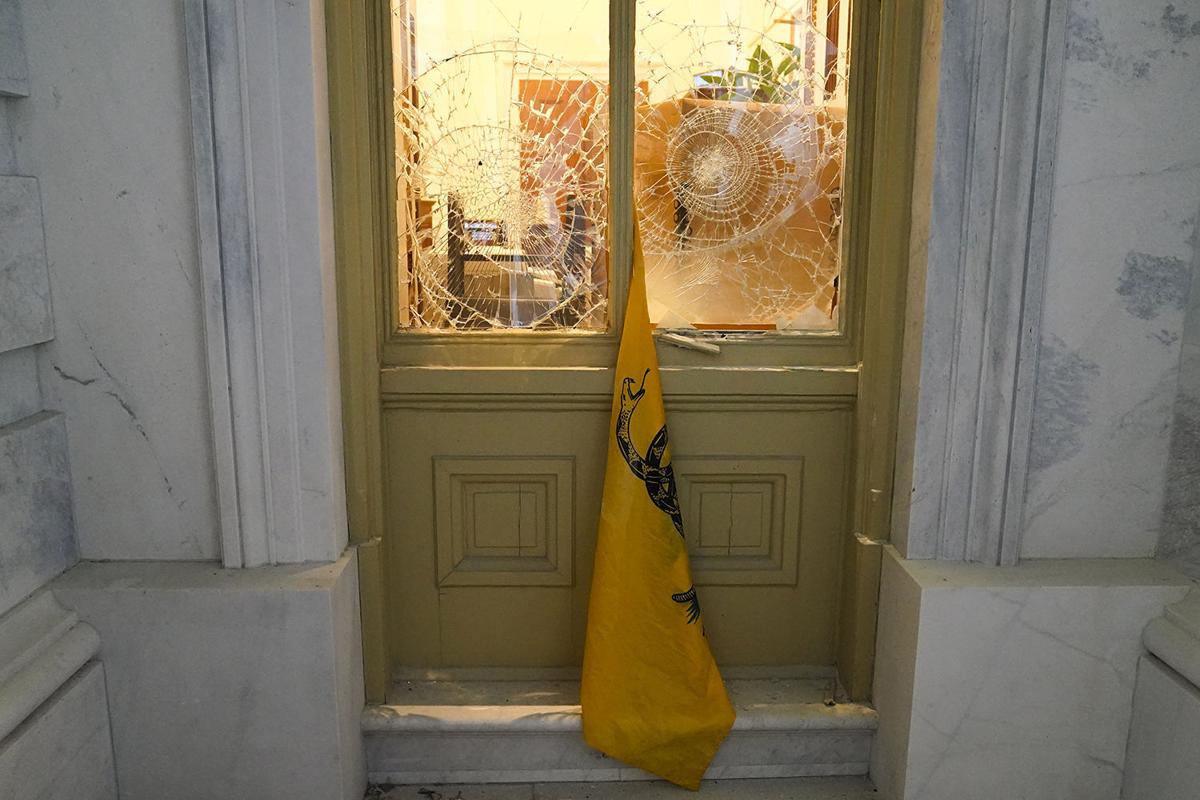 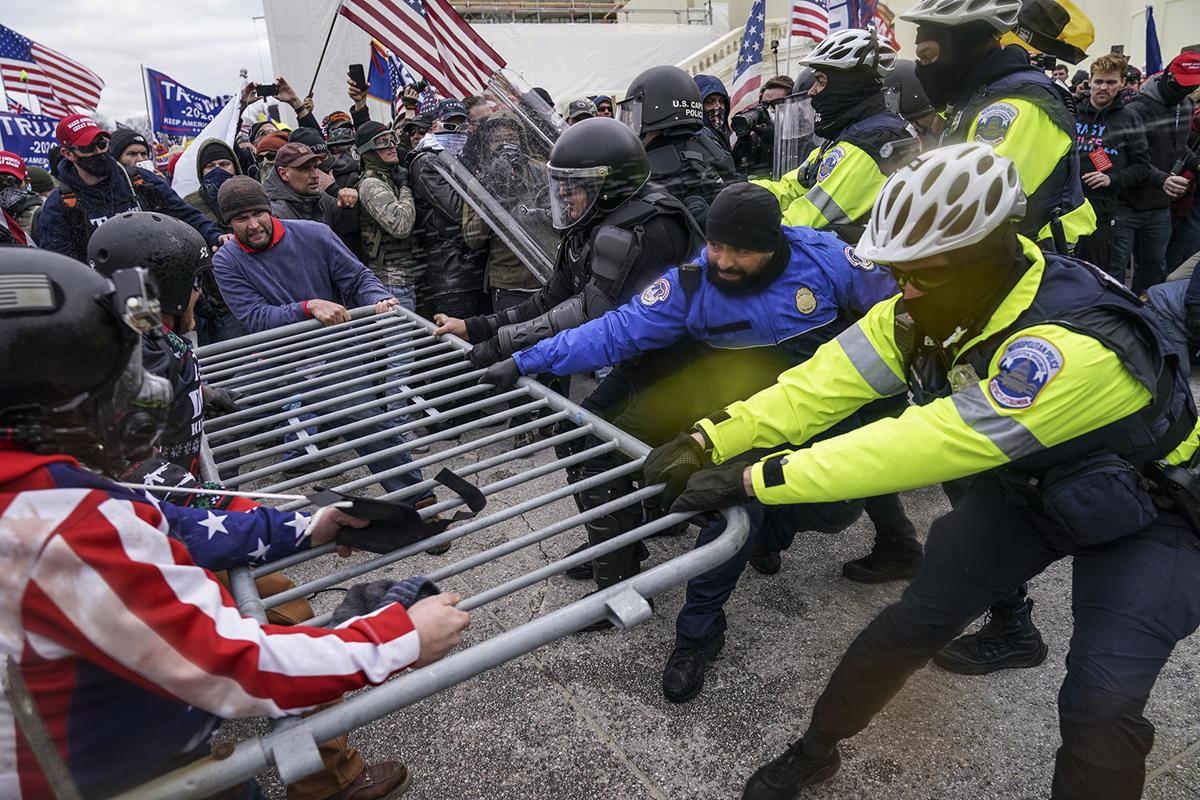 In this Jan. 6, 2021, file photo violent insurrectionists loyal to President Donald Trump supporters try to break through a police barrier at the Capitol in Washington. (AP Photo/John Minchillo, File)

JEFFERSON CITY — Many elected officials were quick to condemn a mob of President Donald Trump’s supporters who stormed the U.S. Capitol on Wednesday in an effort to stop the certification of the 2020 election results.

The D.C. National Guard had been activated, members of Congress were sheltering in place, and one person had been shot, the Associated Press was reporting Wednesday afternoon.

U.S. Rep. Ann Wagner, R-Ballwin, issued one of the most forceful GOP statements. She is one of only two Republicans in the state's congressional delegation — the other being U.S. Sen. Roy Blunt — who said they wouldn't object to President-elect Joe Biden's win.

"The violent riots we are seeing right now are despicable and have no place in our nation," Wagner said. "The President needs to take decisive action immediately to stop this seditious behavior. These riots are nothing more than an attempt to disrupt our democratic process. While I am safe, I am praying for all those in harm’s way."

“What we are seeing in the US Capitol is an act of domestic terrorism and definitionally un-American,” Senate Majority Leader Caleb Rowden, R-Columbia, said on Twitter. “These individuals should be arrested and thrown in prison for as long as the law will allow.”

“The violence and destruction that occurred today in our nation’s capital is unacceptable,” they said. “Peaceful protests are an important part of free speech, but violence can never be tolerated.”

Earlier Wednesday Trump egged supporters on to march to Capitol Hill. But later — hours after they fought police and breached the building — he told them that although they were "very special people” and he backed their cause, they should “go home in peace.”

Gov. Mike Parson, during a news conference, said he hadn’t watched the events “very closely,” but said “I am a law and order guy. ... You don’t violate the law. There’s rules and regulations and you have to abide by them.”

When asked if Trump contributed to the violence, Parson said "absolutely not."

"I hope to see that happen," Bush said. "And he deserves jail. He deserves to go to jail for what he's doing. ... He incited what happened today."

“Domestic Terrorists are waving Trump flags and storming the U.S. Capitol in an act of modern treason against the United States of America,” he said in a statement. “I am calling on all Republican office holders in Missouri to denounce this terrorism and the inflammatory rhetoric spewed from the President of the United States that has led to this moment.”

They “are the inevitable outcome of months of Republican leaders — including many in Missouri — pushing the lie of a Trump victory and attempting to overturn a legitimate election,” she said in a statement. “House Democrats strongly denounce this violent coup attempt and are deeply disappointed Governor Parson and other Missouri Republican elected officials won’t do the same.”

“There is no justification for violence and destruction," he said on Twitter. "It has to stop now. This is not who we are as a nation. Thank you to the Capitol Police who are keeping us safe.”

Bush said on Twitter: “My team and I are safe. I am in disbelief. I can’t believe domestic terrorists are roaming around inside the Capitol. I’m remembering being brutalized and treated like a domestic terrorist just for protesting to keep my people alive. St. Louis: you’re in my heart right now.”

Sen. Josh Hawley, R-Missouri, tweeted on Saturday "It's time to STAND UP." Hawley has been one of the most vocal members of Congress objecting to Trump's loss. Hawley was photographed earlier Wednesday raising a fist toward a crowd of Trump supporters at the Capitol, before the breach.

He issued a statement later Wednesday calling for an end to the violence.

“Thank you to the brave law enforcement officials who have put their lives on the line,” he said in a statement. “The violence must end, those who attacked police and broke the law must be prosecuted, and Congress must get back to work and finish its job.”

After 8 p.m., Hawley spoke on the Senate floor. He said that given the events, debating the election results on Wednesday night "is actually very important. ... this is the lawful place where those objections and concerns should be heard."

AP: Woman shot inside the US Capitol during pro-Trump riot has died

Dozens of supporters of President Donald Trump breached the security perimeter and entered the Capitol as Congress was meeting, expected to vote and affirm Joe Biden’s presidential win. They were seen fighting with officers both inside the building and outside.

Sen. Josh Hawley speaks on the Senate floor for the first time since rioters stormed the Capitol building. Hawley condemned the day's violence but also called for an investigation into “irregularities and fraud.” and vowed to continue objecting to the presidential election results.

In nod to potential violence, Missouri Capitol swells with police

How crowded will the August 2022 Republican primary be?

But ‘the president should be very careful over the next 10 days,’ the Missouri Republican warns.

Police hold off Trump supporters who tried to break through a police barrier, Wednesday, Jan. 6, 2021, at the Capitol in Washington. As Congress prepares to affirm President-elect Joe Biden's victory, thousands of people have gathered to show their support for President Donald Trump and his claims of election fraud. (AP Photo/Julio Cortez)

In this Jan. 6, 2021, file photo violent insurrectionists loyal to President Donald Trump supporters try to break through a police barrier at the Capitol in Washington. (AP Photo/John Minchillo, File)