A Missouri state representative drew scorn Wednesday, with the head of the state Democratic Party calling on him to resign, after he seemed to call for a lynching on social media.

“This is totally against the law,” Love wrote. “I hope they are found & hung from a tall tree with a long rope.”

Criticism on social media came swiftly. Rep. Shamed Dogan of Ballwin, the only black Republican in the Legislature, posted a screenshot of the Facebook post and condemned it.

“Vandalizing property is wrong, but hoping for people to be hung/lynched over it?? Way over the line!!” Dogan tweeted. “What is wrong with us #moleg?”

Vandalizing property is wrong, but hoping for people to be hung/lynched over it?? Way over the line!! What is wrong with us #moleg? pic.twitter.com/b0ulohvatQ

Stephen Webber, the chairman of the Missouri Democratic Party, called for Love’s resignation.

“This is a call for lynching by a sitting State Representative,” Webber tweeted. Calls for poltical (sic) violence are unacceptable. He needs to resign.”

This is a call for lynching by a sitting State Representative. Calls for poltical violence are unacceptable. He needs to resign. #moleg pic.twitter.com/FZCNmsLLY7

House Minority Leader Gail McCann Beatty of Kansas City said that while vandalism is a crime, “its punishment is not extra-judicial murder.”

“In calling for the lynching of those who vandalized a Confederate statute in Springfield, state Rep. Warren Love invoked a form of political violence used throughout the South to keep African-Americans subjugated for generations following the fall of the Confederacy, and for that he must resign,” she added.

On Monday morning, U.S. Sen. Claire McCaskill, D-Mo., weighed in with a brief statement: "Representative Love should resign for his unacceptable comments."

Love represents the 125th District in rural western Missouri and was first elected in 2012. When reached by the Post-Dispatch, he confirmed the Facebook post, and said he was not calling for a lynching.

“That was an exaggerated statement that, you know, a lot of times is used in the western world when somebody does a crime or commits theft. … That’s just a western term and I’m very much a western man. … You know, I wear a coat. You know, I dress western. And, you know, I’m the cowboy of the Capitol.

“I guess I could’ve put on there that, you know, they were yellow-bellied, low-life or whatever.

“But it is disturbing when you see objects of remembrance — and they can be anything from memorials to tombstones to, you know, somebody putting a cross on the highway and planting flowers on it — that somebody would be a low-life enough to desecrate it or vandalize it.”

Love said the fact that the monument was dedicated to the Confederacy was not what triggered him to post.

“I would’ve done that — right across the sidewalk from that monument is a monument of General Nathaniel Lyon,” Love said of the Union general. “I’d of done the same statement if it’d been him in a national cemetery.”

Love said he was a dues-paying member of the Sons of Union Veterans and Sons of Confederate Veterans groups.

“I try to tell history and protect the integrity and the reputation of both men that served in that terrible war,” Love said. “And I want to tell the good, the bad and the ugly.”

He said Confederate monuments were “low-hanging fruit.” He said activists are also turning their attention to statues and monuments of other historical figures, such as Christopher Columbus and Thomas Jefferson.

“At what level would they be satisfied?” Love asked of activists.

“I could take it off but I’m not because it’s already out,” Love said. “I think if it starts anything it starts a dialogue: Should we increase the penalty for vandalism and desecration for objects of memorial or remembrance?”

Love has run into controversy in the past.

He has a picture of himself and another person on his Facebook page with a Missouri Battle Flag — sometimes called Price’s Flag — in the background. Unlike the more widely-known Confederate flag, the Missouri battle flag features a white cross, blue background and red outline.

Sstate Sen. Maria Chappelle-Nadal gave no indication she'll step down, saying she "will continue to fight for issues that are really important."

In a February Facebook post, the Pitch, a Kansas City news site, reported he shared a blog post calling President Abraham Lincoln the “greatest tyrant and despot in American history.” In a House committee hearing in January, during debate on a prevailing wage bill, Love referred to “the black Negro.”

Love told the Post-Dispatch on Wednesday he is not a racist.

“Listen, I’ve got good friends in the Capitol,” Love said. “Me and Tommie Pierson (a black St. Louis County Democrat) was co-captains of a softball team. And you can ask anybody in that Capitol. I probably have a better relationship with the minorities than anybody up there at the Legislature.

“I play softball with them, I’m good friends with them. I, you know, I sit on the same side of the aisle with them and they’re on my softball team,” Love said.

“I am definitely not that word,” Love said of the word “racist.” “I don’t even like to use that word.” 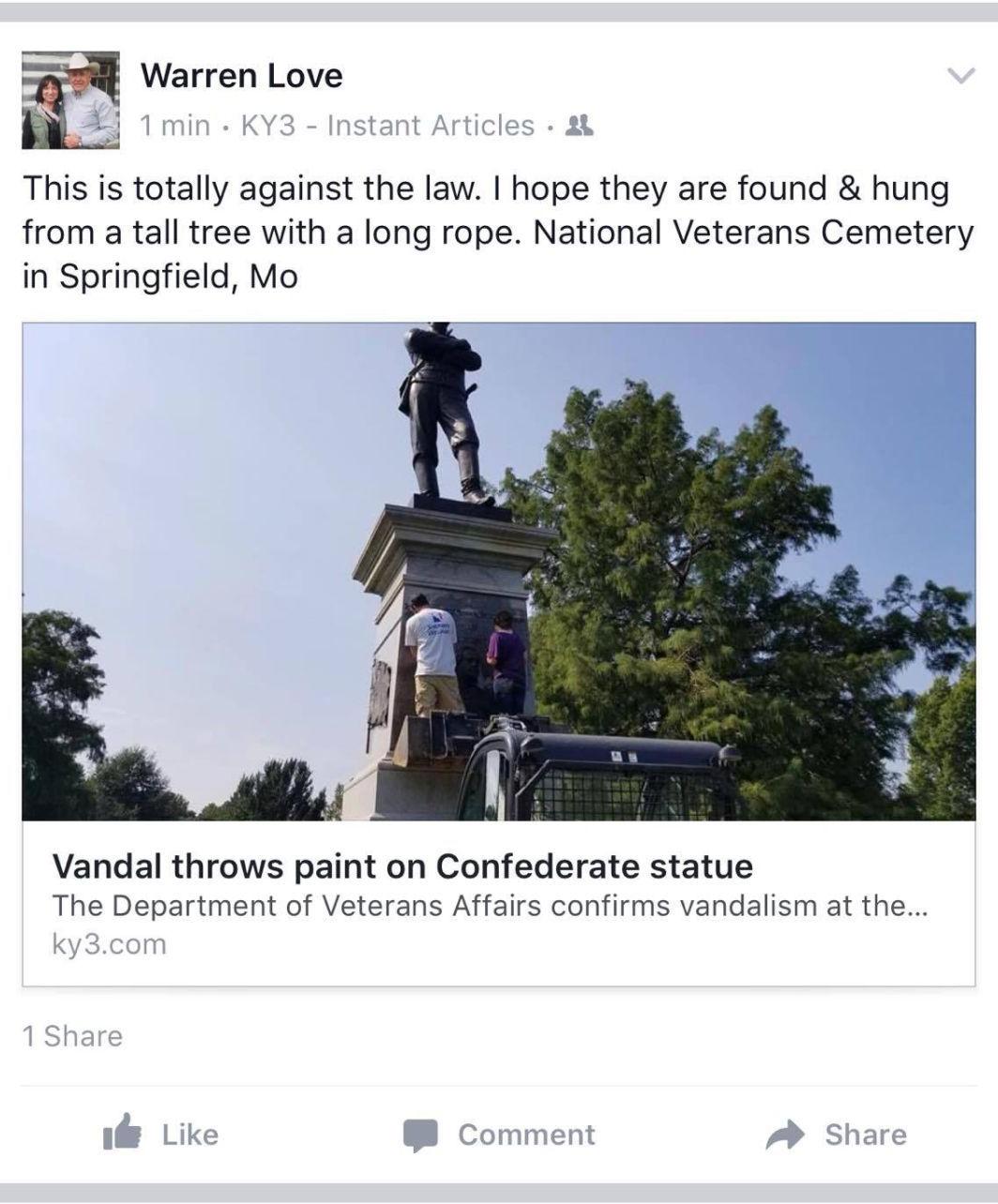