With a snowstorm bearing down on the state and a constitutional deadline looming on Friday to approve Donald Kauerauf as director of the Missouri Department of Health and Senior Services, conservative senators balked at Parson’s choice.

It was the latest example of the intersection of public health and politics at a time when COVID-19 has killed more than 17,000 Missourians.

The pending snowstorm triggered the cancellation of Wednesday’s and Thursday’s regularly scheduled sessions for the Senate and House, making it highly unlikely lawmakers would return to the Capitol by Friday.

“The governor will further evaluate the state’s options in the coming days,” Parson’s office said in a press release.

In a statement, Parson, a Republican, slammed members of the Republican-led Senate who worked to block the appointment.

“The events that have transpired over the past few days surrounding Don’s Senate confirmation hearing are nothing short of disgraceful, unquestionably wrong, and an embarrassment to this state and the people we serve,” Parson said.

Parson said he wouldn’t have nominated a director who didn’t share his conservative values in opposing mask and vaccine mandates. He further scolded senators for “tarnishing a man’s character by feeding misinformation, repeating lies, and disgracing 35 years of public health experience.”

“Don is a devoted public servant who did not deserve this, and Missourians deserve better,” Parson said.

Senate President Dave Schatz, R-Sullivan, said Parson’s pick was well-qualified after a 30-plus year public health career in Illinois. But, after hearing a litany of concerns and criticisms from the hard-line conservatives, he became convinced the nomination could not move forward in the politically fractured upper chamber.

“I’m not sure what ginned up all this excitement on this individual. Obviously there was a lot of hype going into this,” said Schatz, who is running for the U.S. Senate.

Senate Minority Leader John Rizzo, D-Independence, called the outcome “sad,” but not surprising in the current political atmosphere, where masks have become controversial, despite studies showing they help stop the spread of COVID-19 and protect the wearers.

“I think it’s unfortunately what politics has become today. You have a subsection of the Republican Party that is irrational and unreasonable and today they gained a victory by pushing back on science,” Rizzo said.

Kauerauf was appointed to replace embattled DHSS Director Randall Williams in July. Kauerauf became the focal point of Republican-aligned anti-vaccination activists, who falsely claimed he wanted to force all Missourians to get vaccinated against COVID-19.

Kauerauf has said he strongly supports vaccinations as a way to control the pandemic, but he has not called for mandatory vaccinations in keeping with Parson’s oft-stated opposition to the idea.

In a desperate move to salvage the nomination, Parson on Monday issued a press release calling out unnamed officials for “grandstanding” on the confirmation process, saying senators should instead look at Kauerauf’s credentials.

Under the Missouri Constitution, agency heads appointed when the Legislature is not in session must be confirmed within the first 30 days of the Senate session.

Parson could have pulled the nomination and refiled it in order to restart the clock, but a handful of conservatives in the GOP-controlled Senate made it clear they would continue working to block Kauerauf leading up to Friday’s deadline.

The defeat means Kauerauf cannot be appointed to the director position again under a provision in the state Constitution.

Kauerauf, who was being paid about $133,000 annually as acting DHSS chief, had repeatedly said he is opposed to mandates, as is Parson.

Critics like Sen. Mike Moon, an Ash Grove Republican who is running for Congress, weren’t listening.

Moon, who is a religious conservative, argued in a lengthy filibuster Tuesday that Kauerauf was misleading on his knowledge of programs in Illinois designed to limit the spread of COVID-19.

And, Moon suggested Kauerauf was not sufficiently anti-abortion.

Moon’s lengthy diatribe included him questioning the safety of vaccines that have prevented hospitalization and death.

He also went on at length about the use of masks, saying they block the view of people smiling.

“It’s just kind of a sad state about where we are as a society today. When will it end? Maybe when Christ returns. I don’t know,” Moon said.

As Missouri tries to raise state worker pay, some cross the river to Illinois for higher salaries

Gov. Mike Parson on Tuesday released this statement about the Missouri Senate’s failure to confirm Don Kauerauf as director of the Department of Health and Senior Services:

“It’s unfortunate that we now have to disrupt state operations and the leadership at an entire department because the Missouri Senate chose to indulge a few men’s egos.

“The events that have transpired over the past few days surrounding Don’s Senate confirmation hearing are nothing short of disgraceful, unquestionably wrong, and an embarrassment to this state and the people we serve.

“I’ve been a conservative Republican my entire life and contrary to what some Senators believe, tarnishing a man’s character by feeding misinformation, repeating lies, and disgracing 35 years of public health experience is not what it means to be conservative.

“Don is a public health expert that is on record opposing masking requirements and COVID-19 vaccine mandates. He is outspokenly pro-life and morally opposed to abortion. Missourians know that I share these beliefs and would not have nominated someone who does not share the same Christian values. Yet, Senators chose to believe baseless rumors and outright lies on social media rather than the facts in front of them.

“Throughout this process, more care was given to political gain than the harm caused to a man and his family. Don is a devoted public servant who did not deserve this, and Missourians deserve better. I pray that honor, integrity, and order can be returned to the Missouri Senate and that it comes sooner rather than later.”

In defending his pick for state health director, Gov. Mike Parson has prompted a whole new round of criticism.

‘I'm Muslim and I’m not Christian and he appointed me,’ former Sen. Jamilah Nasheed told the Post-Dispatch on Friday.

Gov. Mike Parson said Paula Nickelson could serve the remainder of his term without going through a contentious Senate confirmation process. 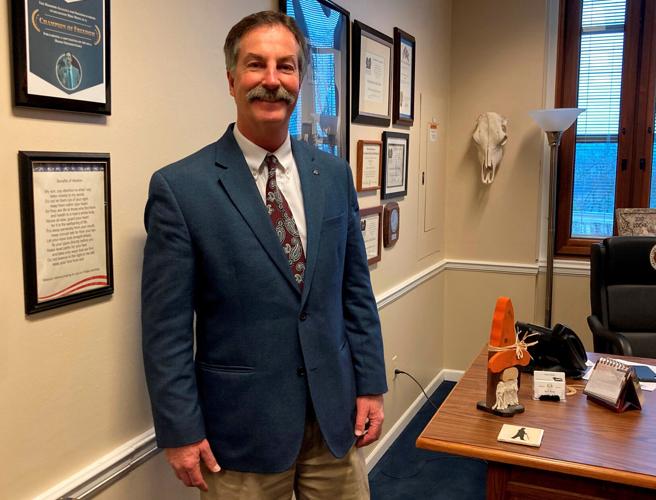 Missouri state Sen. Mike Moon speaks in his Capitol office on Tuesday, Feb. 1, 2022, in Jefferson City, after the Senate failed to confirm the nomination of Don Kauerauf as director of the Missouri Department of Health and Senior Services. Moon, a Republican, led the opposition to Kauerauf's appointment. (AP Photo/David A. Lieb) 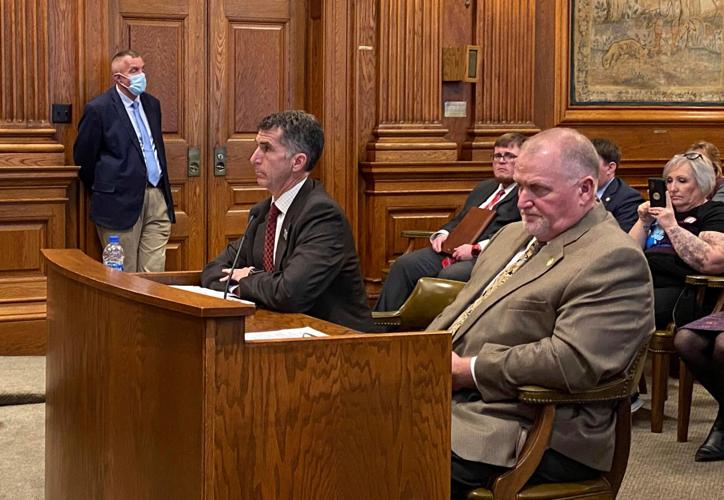 Donald Kauerauf, the acting director of the Missouri Department of Health and Senior Services (seated left), looks on during his Senate confirmation hearing, Monday, Jan. 31, 2022, in Jefferson City. Kauerauf faced vocal opposition from COVID-19 vaccination opponents and some Republicans. He resigned on Tuesday, Feb. 1, after it became clear he wouldn’t win Senate confirmation. (Jeanne Kuang/The Kansas City Star via AP) 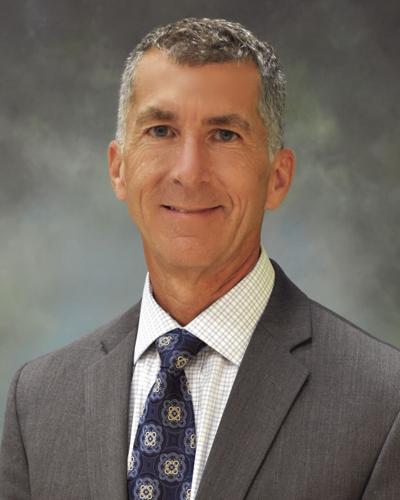