JEFFERSON CITY — Voters on Tuesday approved a constitutional amendment to legalize the recreational use of marijuana for adults.

Despite a slew of groups and elected officials calling for its defeat, “yes” votes for Amendment 3 outpaced “no” votes by a 53-47 margin with all precincts counted, according to unofficial results reported by the Secretary of State.

An hour after the polls closed, vote tallies had not come in from many of the state’s rural Republican strongholds. Early returns, for example, in Cole County, home to the state Capitol, showed the initiative losing 56-44.

St. Louis County residents clearly favored legal weed, voting 59% to 41% for the measure. Support was even more pronounced in the city of St. Louis, where it passed 73% to 27%.

Amendment 3 would alter the state constitution by making it legal for those 21 and older to buy and use marijuana.  Before Tuesday, 19 states had legalized recreational marijuana for adults in the past decade.

In addition to Missouri, four other states had recreational marijuana on the ballot Tuesday. Maryland voters approved legalization; Arkansas and North Dakota voters did not. Legalization also appeared to be losing in South Dakota.

Its spread in other states was enough to win the support of south St. Louis resident Petrit Beka, 53.

Aubrey Evans, 39, said Amendment 3 was one of the main draws for her on Election Day. She said it was “stupid” that marijuana was still illegal, and that there were “too many people sitting in prison” because of it. Concerns about how licenses would be handed out and enshrining the law in the constitution wasn’t enough to dissuade her.

“There’s always going to be some sort of red tape or things to work out,” Evans said Tuesday outside the Julia Goldstein Early Childhood Center in University City.

The push to legalize pot via a ballot initiative comes after Missouri lawmakers have been unable to agree on legislation that would have launched something similar.

Existing medical marijuana companies have largely financed the “yes” campaign with more than $7 million in contributions.

The lengthy amendment outlines a blueprint to create a state program regulating who can get licenses to grow and sell recreational marijuana. The amendment also would automatically expunge the records of people with past nonviolent marijuana-related charges, and would allow those currently incarcerated for marijuana charges to petition for their release.

The state tax rate on cannabis products would be 6%. There also would be state and local sales taxes tacked on to the price.

Money raised through the state tax would go to programs for military veterans.

Sales could begin as early as February.

The amendment has been endorsed by groups such as the Missouri ACLU and Empower Missouri, as well as Kansas City Mayor Quinton Lucas.

Chris Chesley put up pro Amendment 3 signs across St. Louis County Monday night, took a nap and went out to hand out information at polls all day Tuesday.

As polls closed, he grabbed a beer and joined about a couple dozen others at a bar in Ballpark Village in downtown St. Louis to reflect on the legalization journey and the final day. He and others got high fives by most voters but say they also battled against signs and flyers with misinformation on the amendment.

Chesley owns a dispensary and teaches about cannabis at St. Louis University. He’s also worked on other states’ legalization campaigns.

“What other state is going as far as we are?” said Chesley. “This is what the movement is about. Once this passes in Missouri, I hope the next state goes further.”

But some opponents raised objections over a provision that gives existing medical marijuana facilities first dibs on converting their licenses for recreational business.

The Missouri Hospital Association, which represents and advocates for more than 140 hospitals across the state, warned that the public health costs, including emergency room visits and “treatment for psychological and addictive disorders,” likely would outweigh any increase in state revenues from taxes on cannabis products.

And other groups, such as the Missouri NAACP, have said it doesn’t adequately address decades of marijuana criminalization on minority groups.

St. Louis Mayor Tishaura O. Jones was among those urging voters to reject the amendment, saying it falls short on promises of decriminalization.

Some voters put those concerns aside, saying this was the state’s best chance for legalization.

“I’d rather see it legalized sooner rather than later. I don’t think it’ll get done otherwise,” said Roger Roe, 40, after voting in the Tower Grove South neighborhood.

Lee Riley, who works with Good Day Farm dispensaries, one of the largest pot operations in the state, agreed with those sentiments.

“Something more progressive may not have passed in Missouri,” said Riley.

“I’m not willing to stop progress at the expense of perfection.”

Jacob Barker and Taylor Tiamoyo Harris of the Post-Dispatch contributed to this report.

Missouri voters have legalized recreational pot in the state. Here’s what comes next — when, where you can buy and other key issues.

Legal marijuana in Missouri: 10 questions and answers about Amendment 3

See where candidates for U.S. Senate are getting their strongest support.

Provisions in the proposed constitutional amendments in Arkansas and Missouri would give established medical marijuana licensees a leg up in the new recreational marketplace.

Attorneys and police are unsure what marijuana legalization means for police departments, officers and residents.

53% of Missouri voters supported the legalization of marijuana for adult, recreational use on Nov. 8, 2022 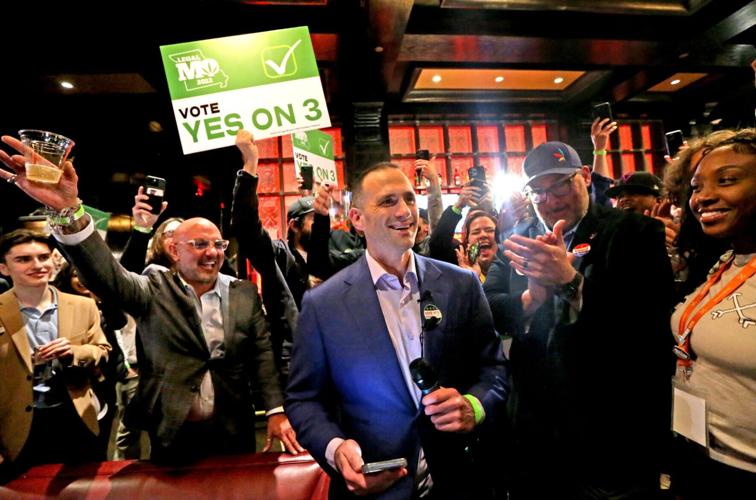 "We made history," said John Payne, center, campaign director for the group Legal MO 2022, as he and other supporters celebrate the passage of Amendment 3, which legalizes recreational marijuana, on Tuesday, Nov. 8, 2022, during an election night watch party at Budweiser Brew House at Ballpark Village in downtown St. Louis. 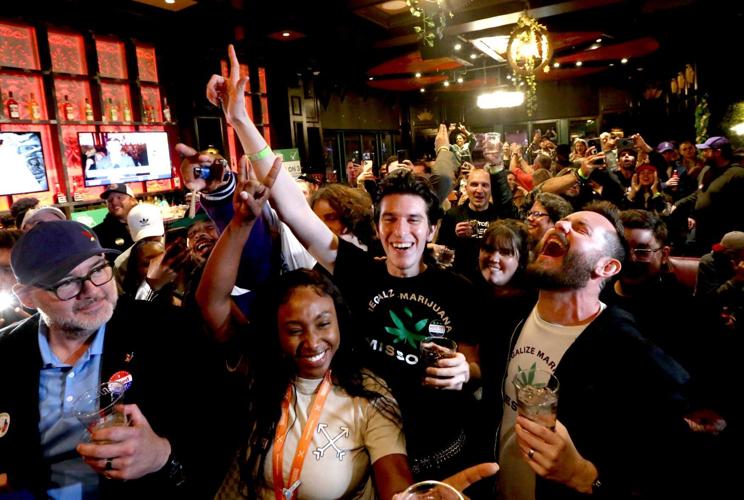 Statewide Coordinator Ryan Quinones, center, and Chris LeGrand, right, both with Legal MO 2022, celebrate the passage of Amendment 3 which legalizes recreational marijuana in the state on Tuesday, Nov. 8, 2022, during an Election night watch party at Budweiser Brew House at Ballpark Village in downtown St. Louis. Photo by Laurie Skrivan, lskrivan@post-dispatch.com 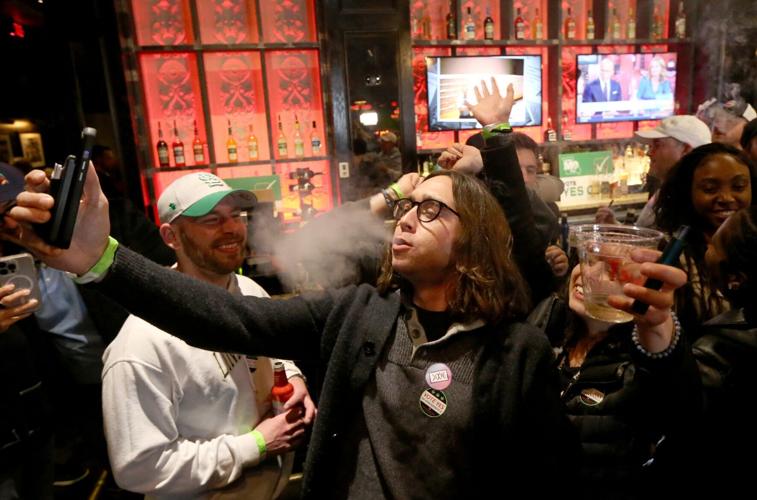 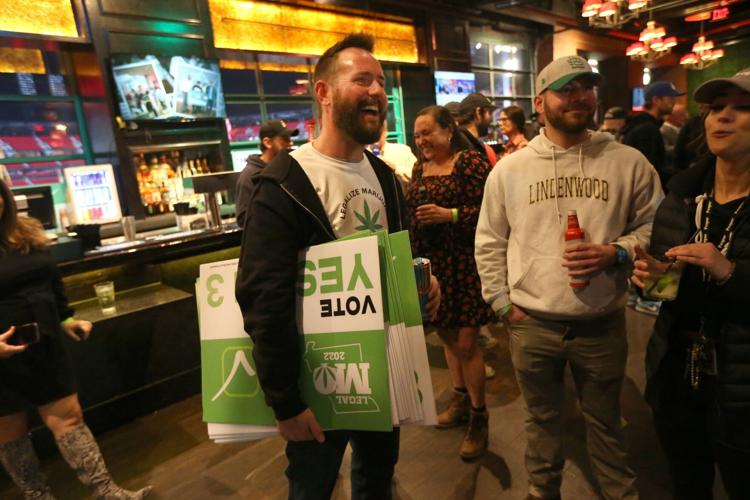 Chris LeGrand, a consultant with the Legal MO 2022 campaign, passes out signs during a watch party for supporters of passing Amendment 3 in Missouri, which would legalize recreational marijuana, on Tuesday, Nov. 8, 2022, at Budweiser Brew House at Ballpark Village downtown.