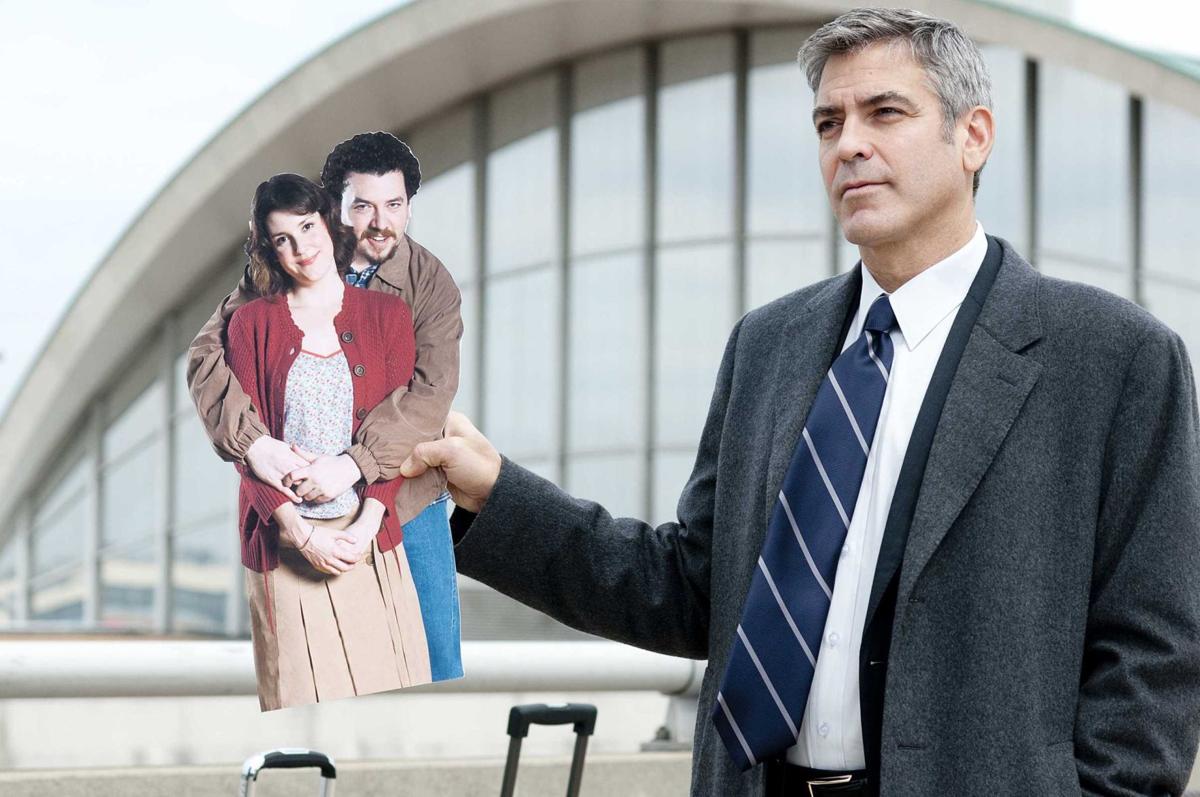 Ryan Bingham (George Clooney) holds a cardboard photo of his sister Julie (Melanie Lynskey) and her fiancé Jim (Danny McBride) in the dramatic comedy "Up in the Air" in a scene filmed at St. Louis Lambert International Airport in 2009. Photo Credit: Dale Robinette DW STUDIOS L.L.C. and COLD SPRING PICTURES 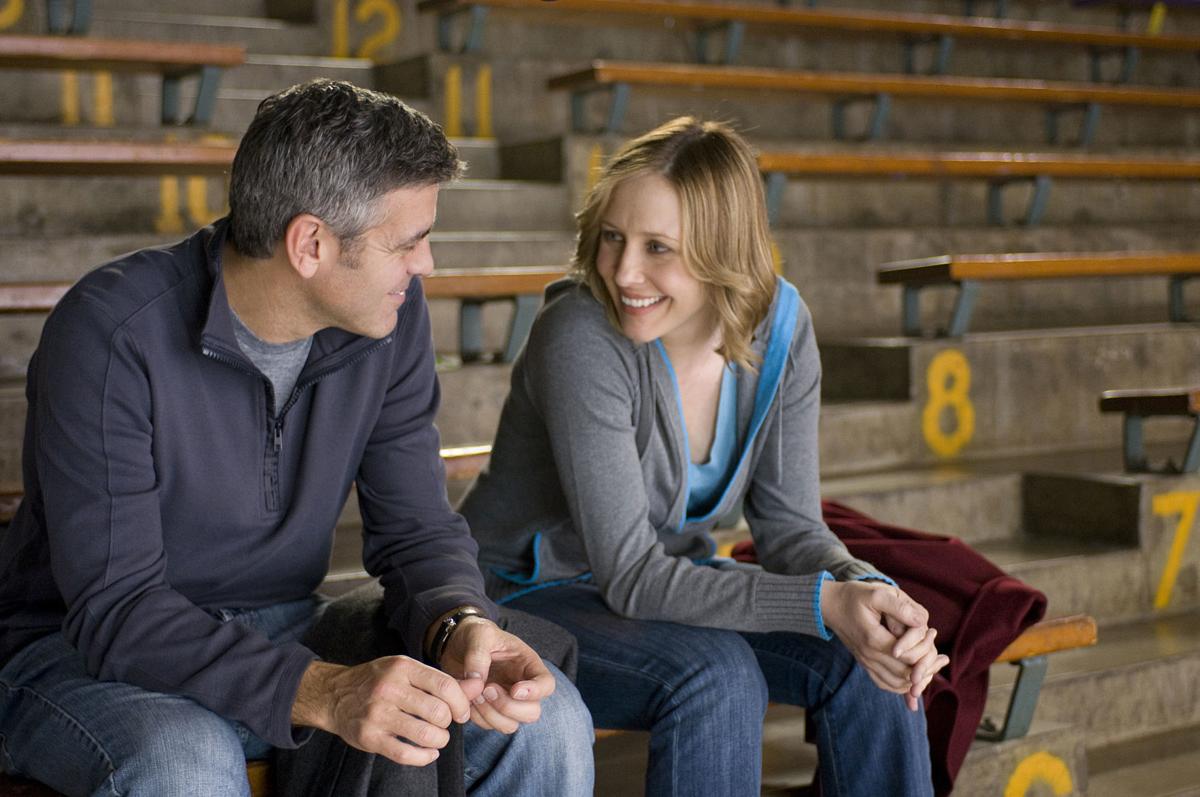 George Clooney and Vera Farmiga in a scene, filmed at Affton High School's gym, from "Up in the Air" (2009). Paramount Pictures

But, if it were up to Lt. Gov. Mike Kehoe, the state would reboot its modest incentive program, with the goal of drawing crews to Missouri to film shows such as Netflix’s “Ozark” and HBO’s “Sharp Objects.”

“I have seen the benefits of us being a film tax credits state,” Kehoe, a Republican, told reporters on Thursday.

“Lake Ozark, Branson area, would really like to work to try to attract some moviemaking,” Kehoe said. “I think we need a small amount.”

Kehoe made the pitch when asked by a reporter about the possibility of jump-starting Missouri’s now-unfunded program.

Meanwhile, the Legislature is weighing transferring control of the Missouri Arts Council, the Missouri Humanities Council and oversight of public radio and television funds, to the lieutenant governor’s office.

If legislators approve Gov. Mike Parson’s changes, Kehoe would see his office budget grow from less than $600,000 this fiscal year to $9.2 million next fiscal year, which starts July 1.

Kehoe said it is too early to know whether he would be put in charge of any new tax credit program for film production.

The Department of Economic Development oversaw the program, but Parson has embarked on an overhaul of the department, shifting hundreds of jobs to other various offices.

For example, 15 employees working in the Department of Economic Development will be transferred to Kehoe’s office if the changes take effect.

Former Gov. Eric Greitens and allies ended the state’s involvement in the program, but Parson said the state could again issue those credits if the Legislature reforms the program.

One plan would cap state funding for the program at about $70 million annually, down from an estimated $150 million.

“I know tax credits are a hot topic of conversation in this building (the Capitol),” Kehoe said, adding that he wanted film incentives to be discussed as lawmakers have a “global conversation” about credits in general.

“Maybe as we move forward we could reincorporate” the film incentives, Kehoe said.

Until 2013, Missouri issued transferable tax credits to cover up to 35 percent of production costs if a studio spent more than $100,000 in the state for films longer than a half-hour.

According to the National Council of State Legislatures, several states have cut their film incentives since the Great Recession. In 2009, according to the organization, 44 states offered some kind of package to film studios.

Since then, 13 states — including Missouri — have shuttered their programs.

Others, such as Colorado, Texas and Maryland, have restricted their offerings, according to the group.

“Most states’ policymakers walk a fine line and try to balance film production incentives in ways that limit forgone revenue,” according to the NCSL, “yet still reduce the chances of losing the state’s film industry to competing incentive programs.”

When Missouri did offer incentives, the state limited its annual funding of the defunct program to $4.5 million.

Georgia, which still offers incentives, does not cap funding. HBO’s decision to film “Sharp Objectfs” in Georgia was in part due to the state’s offerings, a company spokeswoman told the Post-Dispatch in July.

Beyond Georgia, other southern states seem to be cultivating the industry.

Brandi Hinkle, spokeswoman for the Arkansas Economic Development Commission, said HBO’s decision to film the newest season of “True Detective” in that state translated to an economic boon for Arkansas.

The studio hired 1,000 Arkansans — actors, crew, caterers, hair and makeup artists — during the course of the season, Hinkle said.

She called the HBO decision the “holy grail” of projects, and said many smaller projects also take advantage of Arkansas’ incentive program.

The state offers a 20 percent rebate on qualified production expenditures that were made in Arkansas. Rebates are also offered for certain hiring expenses and companies must meet minimum spending requirements.

She said the state does not yet know how much “True Detective” will cost taxpayers.

Skeptics of such incentives wonder about the long-term economic benefits to a state, especially after crews pack up and leave when filming is complete.

Hinkle said supporters of the program do have to vouch for it with certain lawmaker-skeptics.

“The entertainment industry is huge,” she said. “Even when there’s a depression, or a recession, people still need to escape. And Hollywood is magic.”

Records show that during the city’s deer bow hunting season, there have been eight deer killed, with 18 permits issued to hunt 15 properties.

Ryan Bingham (George Clooney) holds a cardboard photo of his sister Julie (Melanie Lynskey) and her fiancé Jim (Danny McBride) in the dramatic comedy "Up in the Air" in a scene filmed at St. Louis Lambert International Airport in 2009. Photo Credit: Dale Robinette DW STUDIOS L.L.C. and COLD SPRING PICTURES 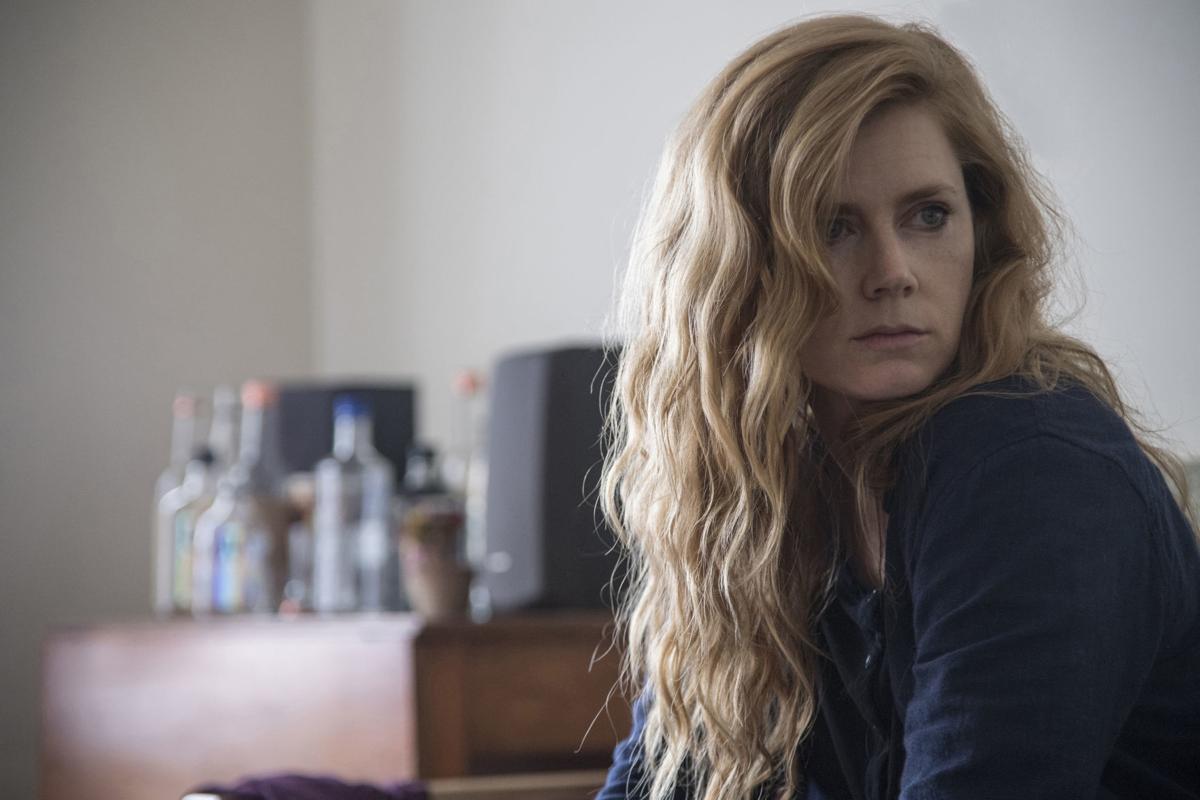 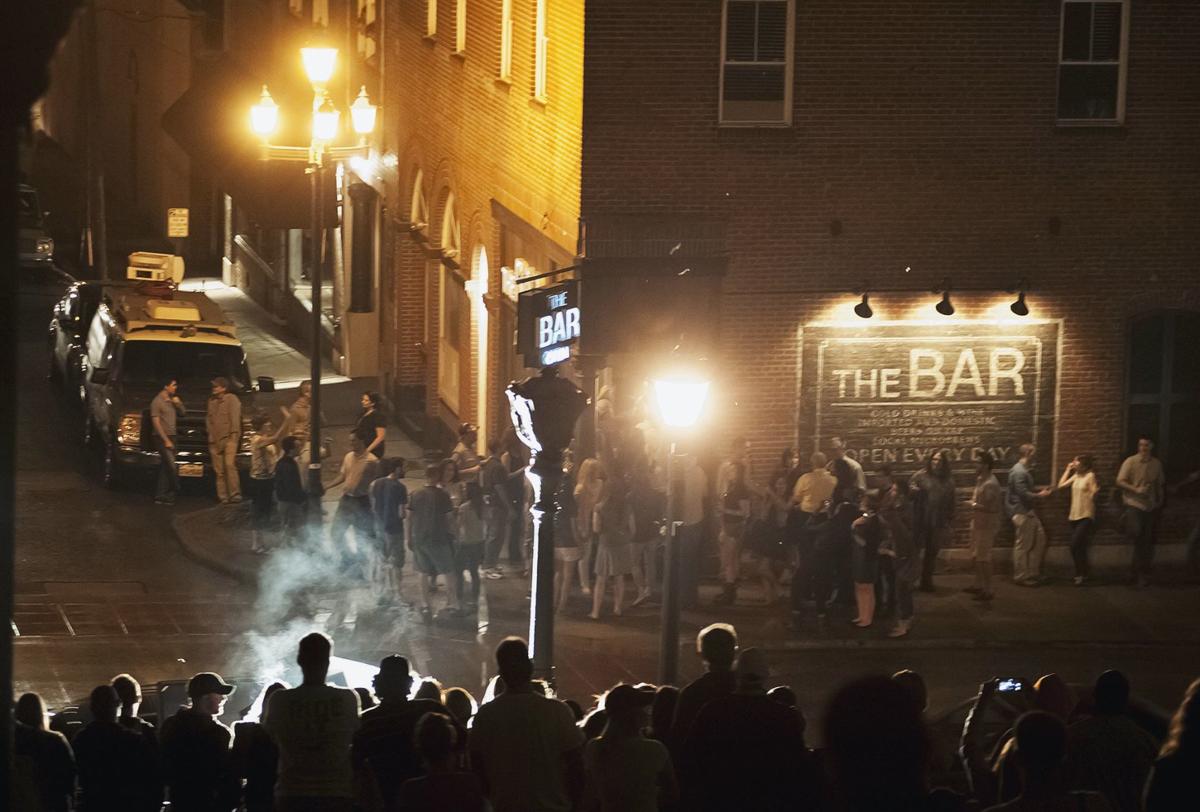 George Clooney and Vera Farmiga in a scene, filmed at Affton High School's gym, from "Up in the Air" (2009). Paramount Pictures 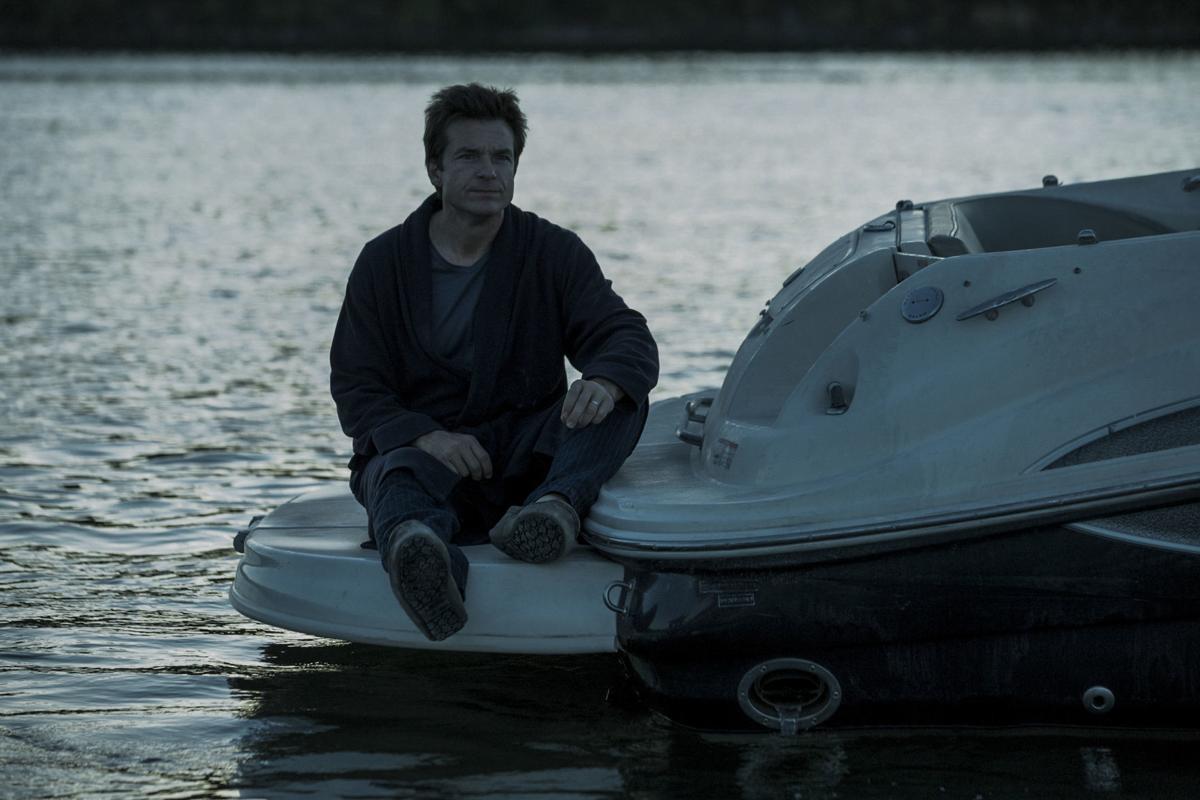 Jason Bateman in "Ozark." Set around the Missouri lake, it is filmed in Georgia. Jackson Davis/Netflix