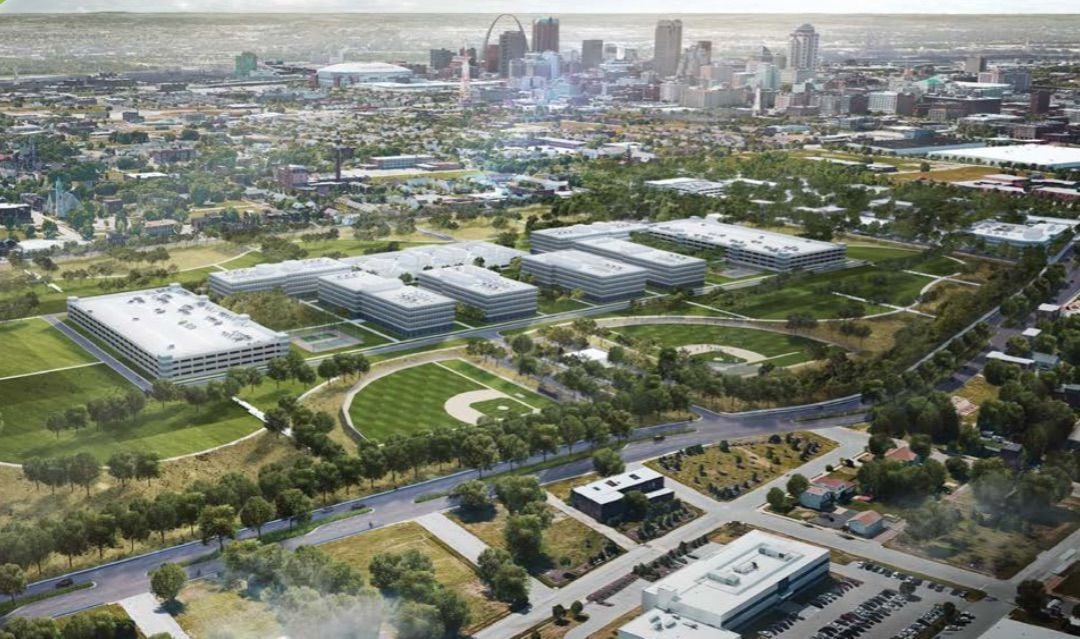 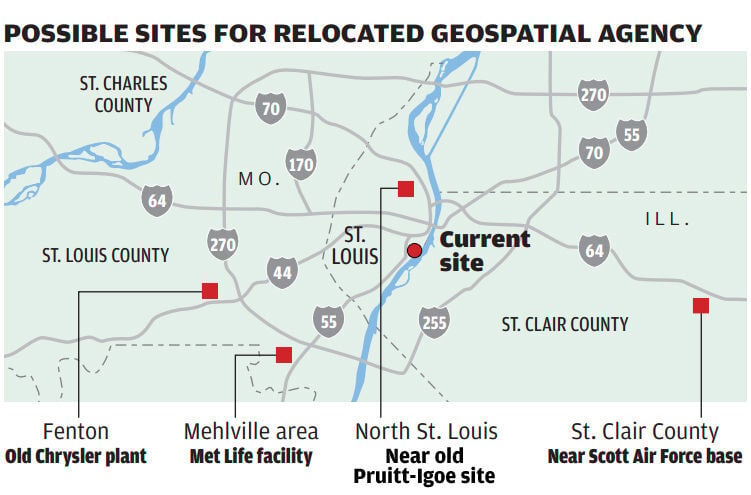 ST. LOUIS • The city of St. Louis would sustain significant tax losses if a federal spy facility were to leave its borders, a study released Friday says.

The study, conducted by the Army Corps of Engineers, appeared to mirror some points made by St. Louis officials, who had expected to receive negative marks considering the complexity of placing such a large facility in a blighted urban area.

The study noted that St. Louis would lose more than $2 million in annual earnings tax revenue if the agency relocated to any of the three other sites. And, it underlined the city site’s location in areas designated as priorities for federal investment.

Still, a location near Scott Air Force Base fared well, largely because it is on undeveloped land near the air base, facilitating an easier project.

The current facility is situated south of the Anheuser Busch brewery. Defense officials say the facility must be replaced to fit with the spy agency’s hi-tech mission.

The agency studied four locations: Fenton (the old Chrysler plant along Interstate 44); Mehlville (at the Met Life facility on Tesson Ferry Road, between Interstate 270 and Highway 141); north St. Louis (a site near the old Pruitt-Igoe housing complex near Cass and Jefferson avenues); and St. Clair County (site adjacent to Scott Air Force Base along Interstate 64).

The study did not name a preferred location or issue an overall opinion. That will come sometime in March 2016, when federal officials select the winning site.

It also included the expected construction price tag of $945 million (in 2014 dollars). Defense officials said the total cost to develop and move to the site was $1.6 billion.

Other cost studies are expected. Illinois officials have offered to give land to the federal government for the site at no cost, while St. Louis officials may charge millions of dollars.

Other drawbacks for St. Louis were noted. Current NGA employees cited public safety as a concern at the north St. Louis location, the study indicated. The study also knocked the St. Louis site for needing infrastructure upgrades and the potential removal of historic properties.

The study also addressed the city’s efforts to use eminent domain and relocate residents to put together a 100-acre urban site for the construction. But it found that there would be “long-term beneficial effects to individuals who are relocated. In addition, the city of St. Louis is complementing these efforts with other federal redevelopment programs to develop a sustainable community.”

Of the four sites, the location near Scott Air Force Base appeared to have the fewest direct hurdles, largely because it is a flat farm field that has been undeveloped, although the study did say further review is needed based on archeological findings. St. Clair County officials said the location may have once housed a 19th-century German farm house.

Also, the study indicated the Illinois location would increase the commute times for current NGA workers.

Selection of either St. Louis County site would cause the county to lose about an average of $500,000 in annual property taxes every year because federal facilities are exempt, the study says.

Competition for the project has been fierce. Both St. Louis city and St. Clair County officials have been heavily promoting their sites. St. Louis County Executive Steve Stenger has endorsed the city location, leaving the St. Louis County sites without a major booster.

On Friday, Missouri and Illinois officials were quick to issue dueling statements regarding the study.

“The just-released Environmental Impact Statement confirms what I have said from the beginning of this competition, the Northside site in the City of St. Louis would advance NGA’s vital mission, yield maximum economic benefits for the massive federal dollars invested, and would boost our entire region by transforming a distressed neighborhood near downtown St. Louis.”

St. Clair County Board Chairman Mark Kern said: “We are pleased to have worked closely with the National Geospatial-Intelligence Agency and the Army Corps of Engineers to provide them the necessary material for this study. We look forward to working closely with these agencies moving forward to secure the future NGA site.”

Major findings of a federal study of each of four potential sites for a new National Geospatial Intelligence Agency facility:

St. Clair County (Scott AFB): The site is the easiest to develop but could have one potentially major negative impact: An archeological site situated within the development footprint requires more study. Site would double average commute time for NGA workers.

St. Louis city: Several minor to moderate environmental challenges identified, as well as some historic preservation issues. Study also found the area would achieve major economic benefits from the project. It also noted that moving the facility outside of St. Louis would cause the city to lose about $2.19 million in earnings tax revenue.

Mehlville: No major benefits or negative environmental impacts would be expected from construction. Existing office park at the site would have to be demolished, and site selection would cause St. Louis County to lose more than $545,495 in annual property taxes.

City and three other area sites vying for $1.6 billion project.

Slay to feds: spy agency decision will be 'pivotal moment' in city's history

But decisions on big projects will be made outside of St. Louis