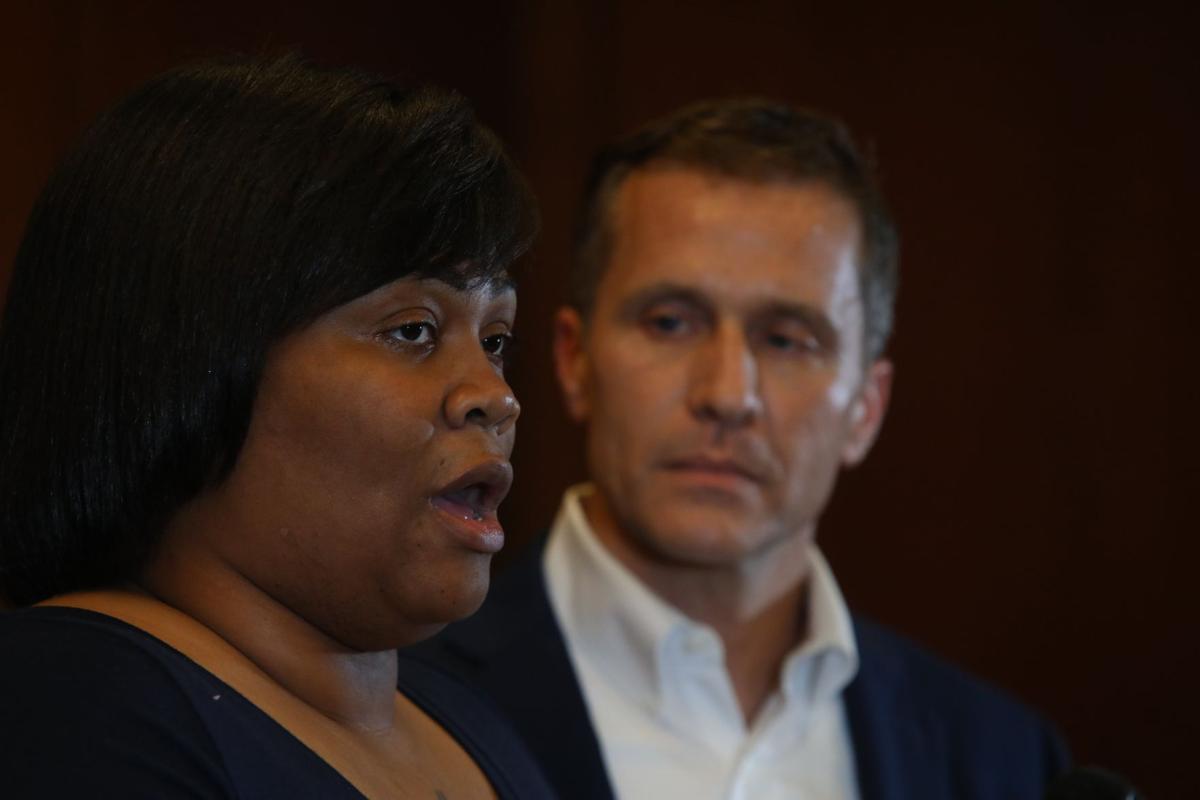 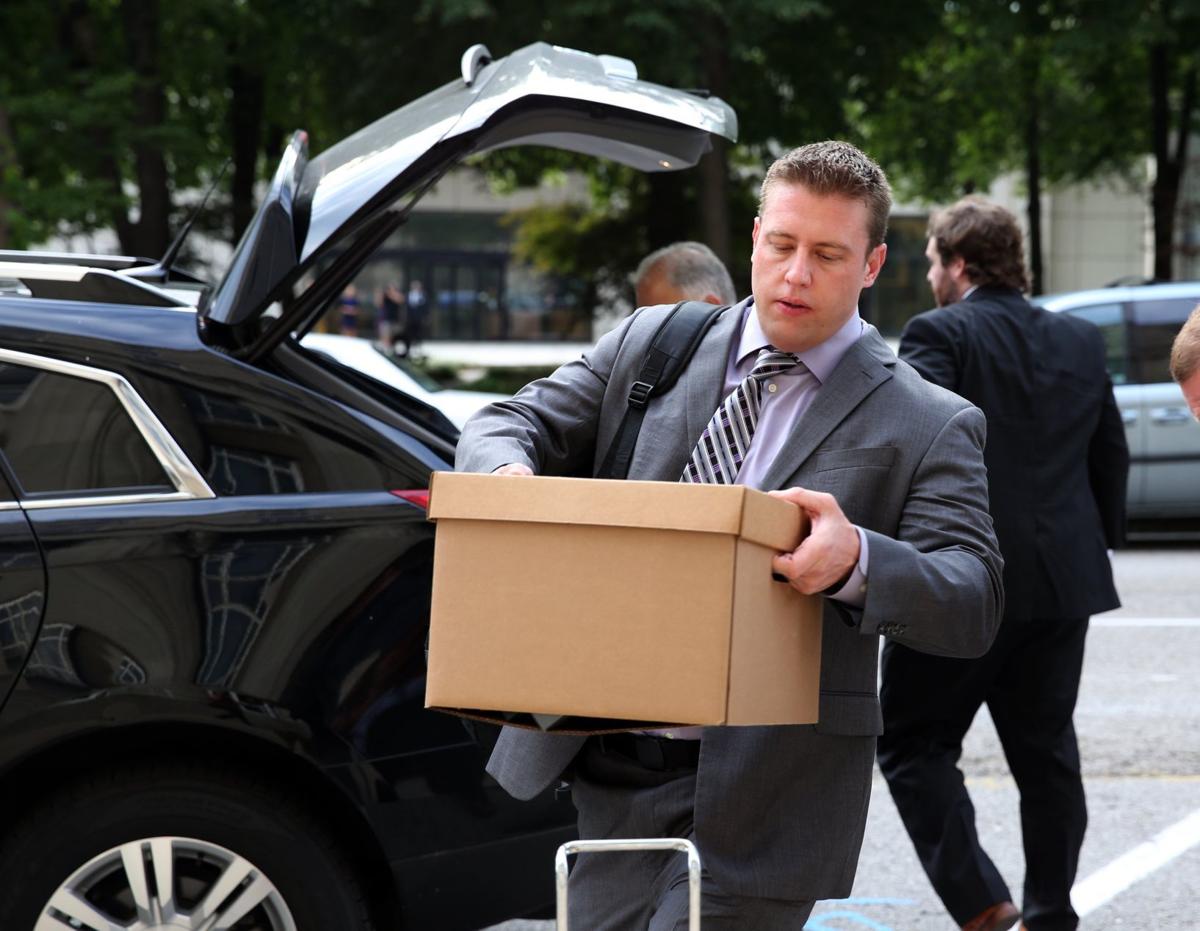 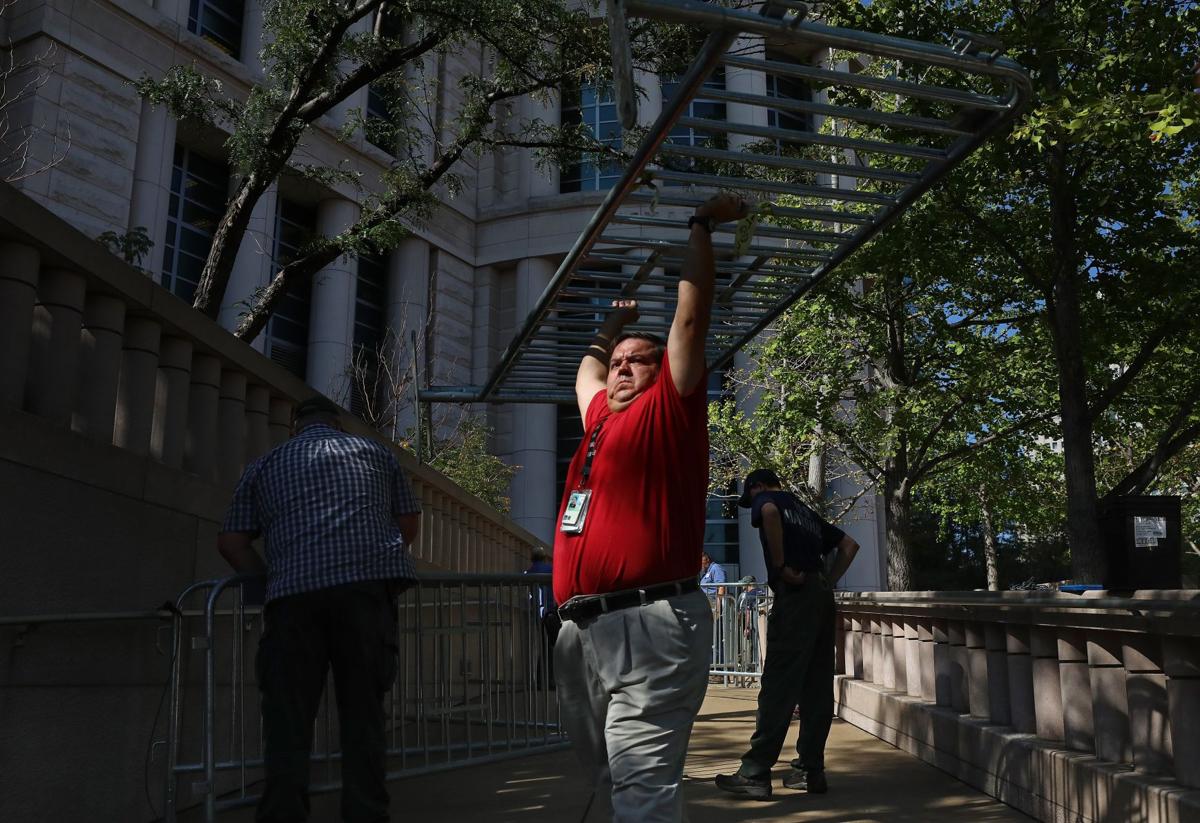 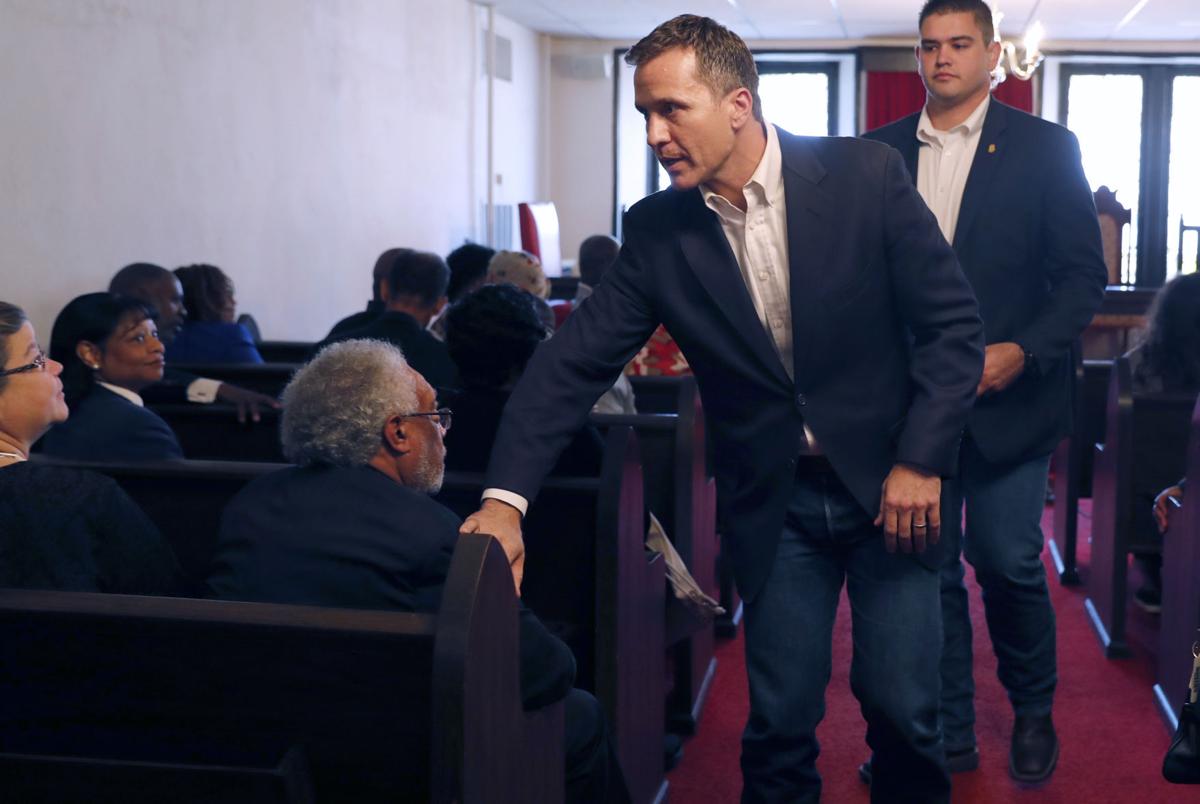 Missouri Gov. Eric Greitens walks in speak to civic leaders and clergy at Washington Metropolitan AME Zion Church ahead of a verdict in the trial of former St. Louis police officer Jason Stockley, Monday, Sept. 11, 2017, in St. Louis. Stockley is accused in the 2011 killing of a black man following a high-speed chase, prompting clergy to warn of possible unrest if he is acquitted. Former St. Louis officer Jason Stockley's trial ended last month, but Judge Timothy Wilson has yet to rule. (AP Photo/Jeff Roberson) 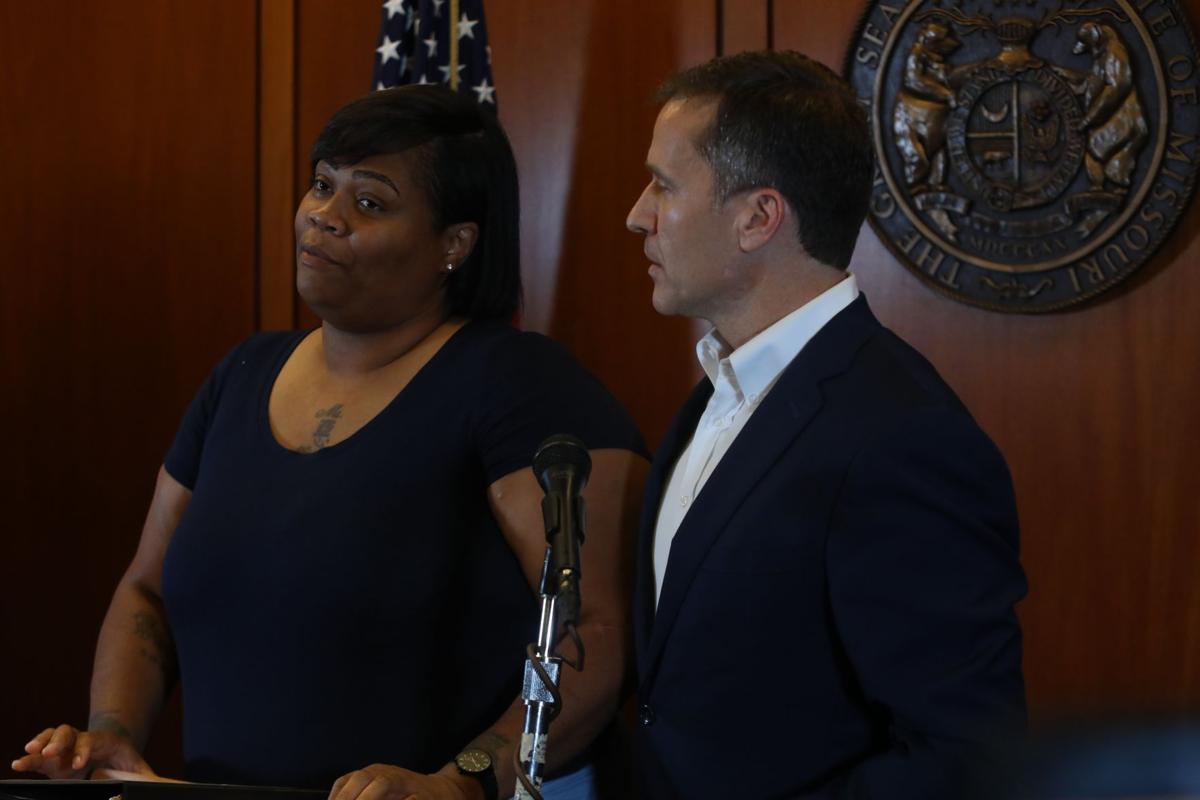 ST. LOUIS • With courthouse barricades up, police presence expanded and National Guard troops on standby, St. Louis is braced for Friday’s anticipated verdict in the murder trial of a white police officer accused of executing a black motorist.

Former St. Louis police Officer Jason Stockley maintains the 2011 shooting death of Anthony Lamar Smith was in self-defense. If he is acquitted of a first-degree murder charge, officials fear the inevitable protests could turn violent. Some activists have hinted as much.

“However it goes, I ask for peace,” Wilson said.

Greitens echoed Wilson’s sentiments, saying he understood that many people feel pain over the shooting. “Do not turn that pain into violence,” he said. “One life has been lost in this case, and we do not need more bloodshed.”

Earlier Thursday, Greitens — who won office last year in part on a promise not to repeat mistakes he says officials made in responding to the racial unrest in Ferguson in 2014 — announced he is readying the Missouri National Guard to protect both protesters and property.

“As Governor, I am committed to protecting everyone’s constitutional right to protest peacefully while also protecting people’s lives, homes, and communities,” Greitens said in a statement. “Taking the steps to put the Missouri National Guard on standby is a necessary precaution.”

On Thursday, barricades went up around the Thomas F. Eagleton U.S. Courthouse downtown, and St. Louis and St. Louis County police prepared to move officers to 12-hour shifts Friday. The federal courthouse will be closed on Friday.

Stockley fatally shot Smith after a police chase on Dec. 20, 2011. Prosecutors have alleged Stockley planted a .38-caliber revolver in Smith’s crashed Buick after shooting him five times at close range. The defense has said Stockley shot Smith in self-defense because Stockley believed Smith was reaching for a gun.

There has been no official word on the timing of the announcement of a verdict, but multiple sources have told the Post-Dispatch it will come down Friday.

St. Louis Mayor Lyda Krewson announced Thursday that city police will establish an area in Poelker Park at Tucker Boulevard and Market Street “for people who want to exercise their right to free speech.”

In a video statement, Krewson called protest “a cornerstone of our democracy.” But she also warned that “anyone intent on violence or vandalism toward people or property will be arrested.”

“It should not be difficult to both understand and support the right to free speech and be clear that those who commit violent or destructive acts will face consequences,” she said.

Earlier this week, the police union that primarily represents black city officers called for Stockley to be convicted, while also calling for calm if he is not.

“The Ethical Society of Police understands that this case may cause public frustration and we respect the citizens’ right to protest,” the union said in a statement Tuesday. “However, we do not condone any violence regardless of the court’s decision.”

Interim St. Louis Police Chief Lawrence O’Toole told officers about the possibility of 12-hour shifts in a memo this week. Days off, personal days and some vacations will be canceled, the memo said.

Also this week, Greitens met with black faith leaders and first responders to talk about the situation.

Among others calling for calm as the verdict approaches has been Christina Wilson. A statement released last week by Wilson’s attorney, Albert Watkins, expressed hope that “our city can use this pre-Ferguson tragic loss of life to serve as a catalyst for post-Ferguson healing.”

A timeline of events and coverage

Missouri Gov. Eric Greitens walks in speak to civic leaders and clergy at Washington Metropolitan AME Zion Church ahead of a verdict in the trial of former St. Louis police officer Jason Stockley, Monday, Sept. 11, 2017, in St. Louis. Stockley is accused in the 2011 killing of a black man following a high-speed chase, prompting clergy to warn of possible unrest if he is acquitted. Former St. Louis officer Jason Stockley's trial ended last month, but Judge Timothy Wilson has yet to rule. (AP Photo/Jeff Roberson) 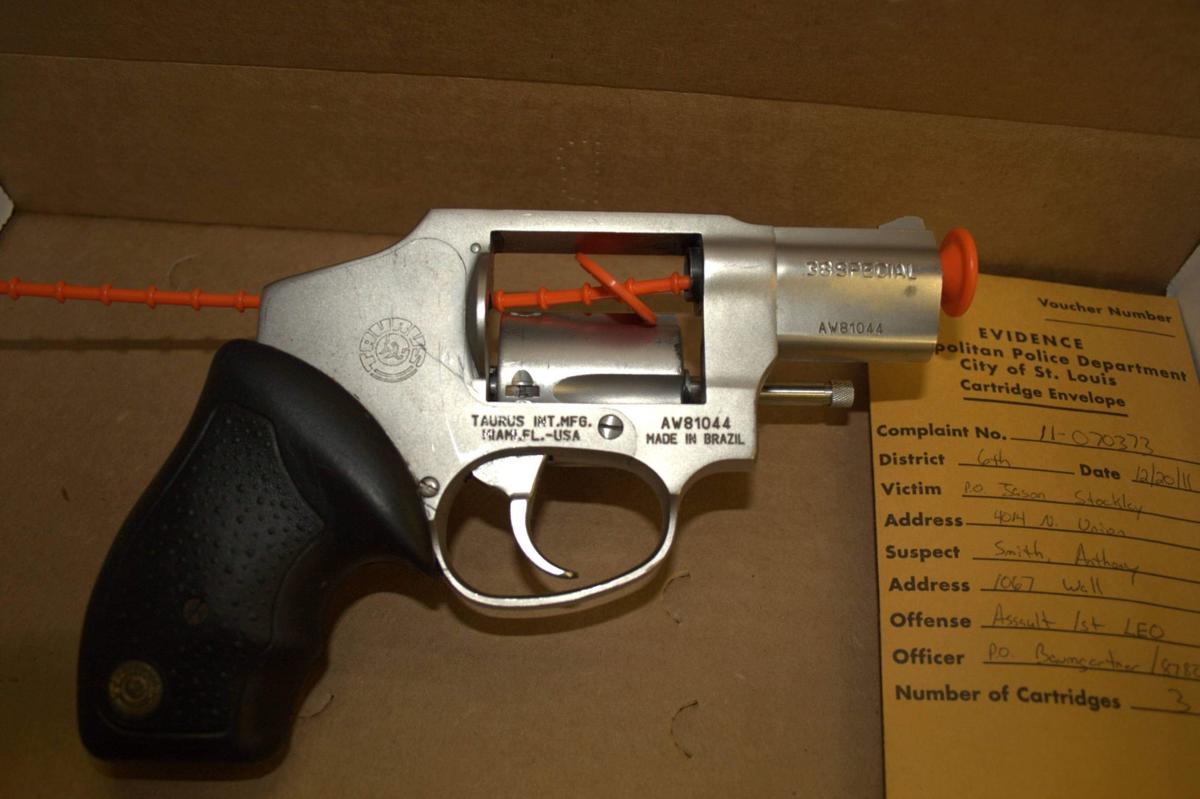 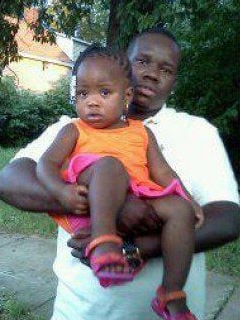