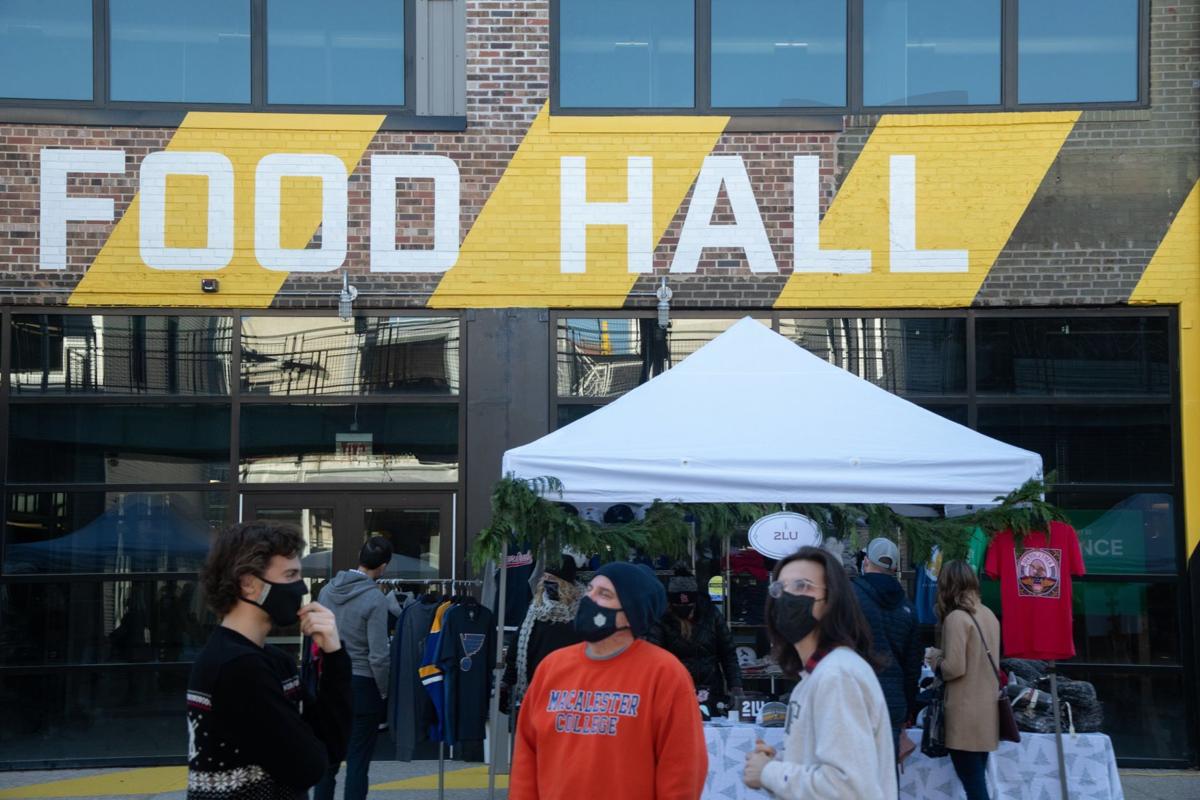 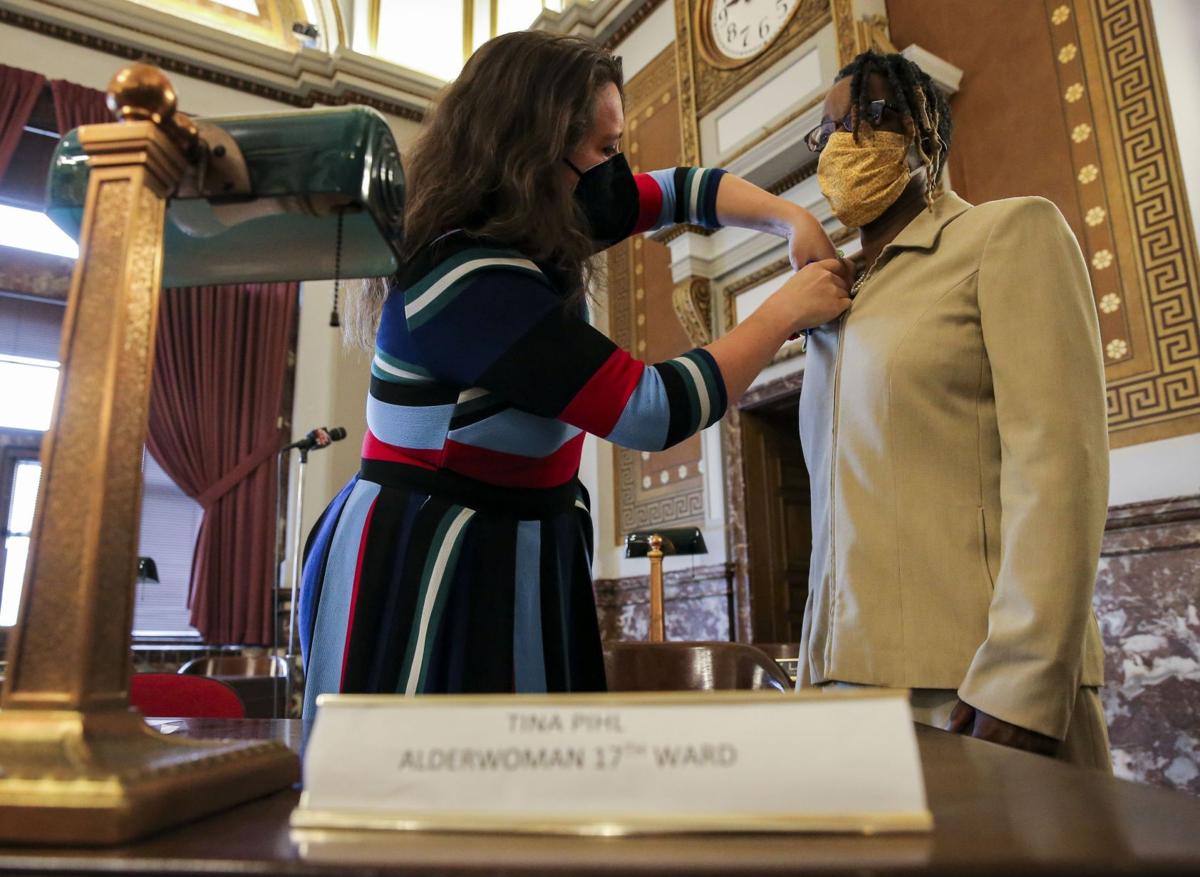 Tina Pihl, alderman-elect for the 17th Ward, has a corsage pinned to her jacket by campaign treasurer Kaleena Menke, left, before taking the oath of office in the Aldermen's Chambers of St. Louis City Hall on Tuesday, April 20, 2021. (Colter Peterson, cpeterson@post-dispatch.com)

ST. LOUIS — The new alderman who represents the ward in which the high-profile City Foundry project is underway wants the developer to contribute funding to spur development in north St. Louis, the Post-Dispatch has learned.

Tina Pihl, elected last month to represent the 17th Ward on the Board of Aldermen, is pushing for the concession — and has the support of Mayor Tishaura O. Jones’ administration, which came into office promising a new approach to the city’s use of development incentives.

Pihl wants the City Foundry developer to redirect about 10% of the $17 million in tax increment financing incentives allocated for the second phase of the Midtown development, according to people familiar with the matter. That money would go to a yet-to-be formed fund or other entity tasked with catalyzing investment on the city’s north side, which has long struggled to attract redevelopment, they said.

Nahuel Fefer, the mayor’s director of policy and development, on Friday confirmed negotiations with the developer are underway.

“We are currently engaged in productive negotiations with the Foundry team and Alderwoman Pihl, and expect to reach an equitable resolution in the coming weeks which serves the interests of the city’s taxpayers and children,” Fefer said in a statement. “We appreciate Foundry’s collaboration as we explore innovative models designed to redirect public resources towards affordable housing, and start to reverse decades of disinvestment from traditionally marginalized communities.”

A spokesman for Mayor Jones said her office was ‘keeping its promise to be a more active partner in negotiations around development incentives.’

City Foundry developer Steve Smith declined to discuss specific dollar amounts involved in the negotiations but confirmed he was working with Pihl and the Jones administration to find a way to use the strength of the central corridor to “jump-start” development in areas such as north city, a philosophy he said he agrees with.

There’s not currently a model for doing that in St. Louis, he said, but he is “confident that we’re going to get to an exciting pilot program” and that he and the city soon would be able to share more details.

“We have a common and agreed-upon goal, and all the debate is how we get there,” Smith said in an interview. “We are 100% committed to the city of St. Louis. The aspirations of the new administration, we are supportive of.”

Pihl said Friday there are various models around the country for redirecting public resources to underinvested areas. She declined to say what dollar figure was under discussion at City Foundry.

“This is all a work in progress,” she said.

Aldermen in 2018 approved the $17 million in tax increment financing — a public subsidy that allows developers to use increases in sales and property taxes generated by new construction for their projects — for the second phase of the City Foundry project. But Smith, the developer, late last year asked the city to amend his plans for the second phase, swapping out a 100,000-square-foot office building for a 282-apartment structure near Vandeventer and Forest Park avenues.

The amended City Foundry plan does not seek any more TIF incentives beyond the $17 million aldermen already signed off on years ago. But because of the amendment to the project’s plan, which would increase the total investment of the second phase to $138 million from $97 million, it needs to go back through the TIF Commission and win approval from aldermen.

In St. Louis, cooperation from the alderman who represents the ward where a project is located is almost essential to pass tax incentives, zoning and other development legislation. It would be highly unusual for an alderman other than Pihl to sponsor the bill amending the TIF plans.

Smith and his Lawrence Group architecture and development firm have a long development track record in St. Louis, investing in major historic rehabs in Grand Center and downtown for the better part of the last 20 years.

The City Foundry is among his most ambitious, and the new terms being pushed by the city are just the project’s latest wrinkle.

Smith has spent the last five years working to rehab the old Federal Mogul industrial site, long an eyesore along Highway 40 (Interstate 64), into a complex of offices and shops centered around a food hall filled with local restaurant concepts. Construction on the first phase is nearly complete. Some office tenants are currently there — two that did not previously have offices in the city, Smith added — and City Foundry has begun hosting concerts. The larger food hall opening was delayed by the pandemic, but Smith said it should open this year.

About $19 million in TIF was allocated for the City Foundry’s first phase, initially valued at $130 million. The project was risky even before COVID, and Smith landed new investors to keep the project going in March 2020 — just before the pandemic hit. This year, the bankruptcy of anchor tenant Alamo Drafthouse Cinema was another speedbump, though an Alamo franchisee now plans to open a location in the development next spring.

The amount of city tax incentives provided for development in the more affluent central corridor has drawn concern from some progressive aldermen as well as Jones. This month, the new mayor vetoed bills that would authorize property tax abatement — another development incentive — for two other projects in the central corridor and encouraged the developers to come back to the negotiating table.

Much of the redirected property taxes from TIFs and abatements would normally go to the school district, which has little to no say in awarding the incentives. Developers, though, argue their projects would not get financed but for the public assistance, and that no new tax revenue would be generated without the subsidies.

For the second time in two weeks, Alderman Tina Pihl has asked to delay a meeting on tax incentives.

Negotiations with the new aldermen and mayoral administration slowed the project’s approval, but the parties say they now have a ‘model for equitable development.’

Millions of dollars have already been raised in the funds created by the 2017 tax cut law to support developments in Midtown, Cortex.

The mixed-use project is at a former midtown St. Louis factory site.

Tina Pihl, alderman-elect for the 17th Ward, has a corsage pinned to her jacket by campaign treasurer Kaleena Menke, left, before taking the oath of office in the Aldermen's Chambers of St. Louis City Hall on Tuesday, April 20, 2021. (Colter Peterson, cpeterson@post-dispatch.com)