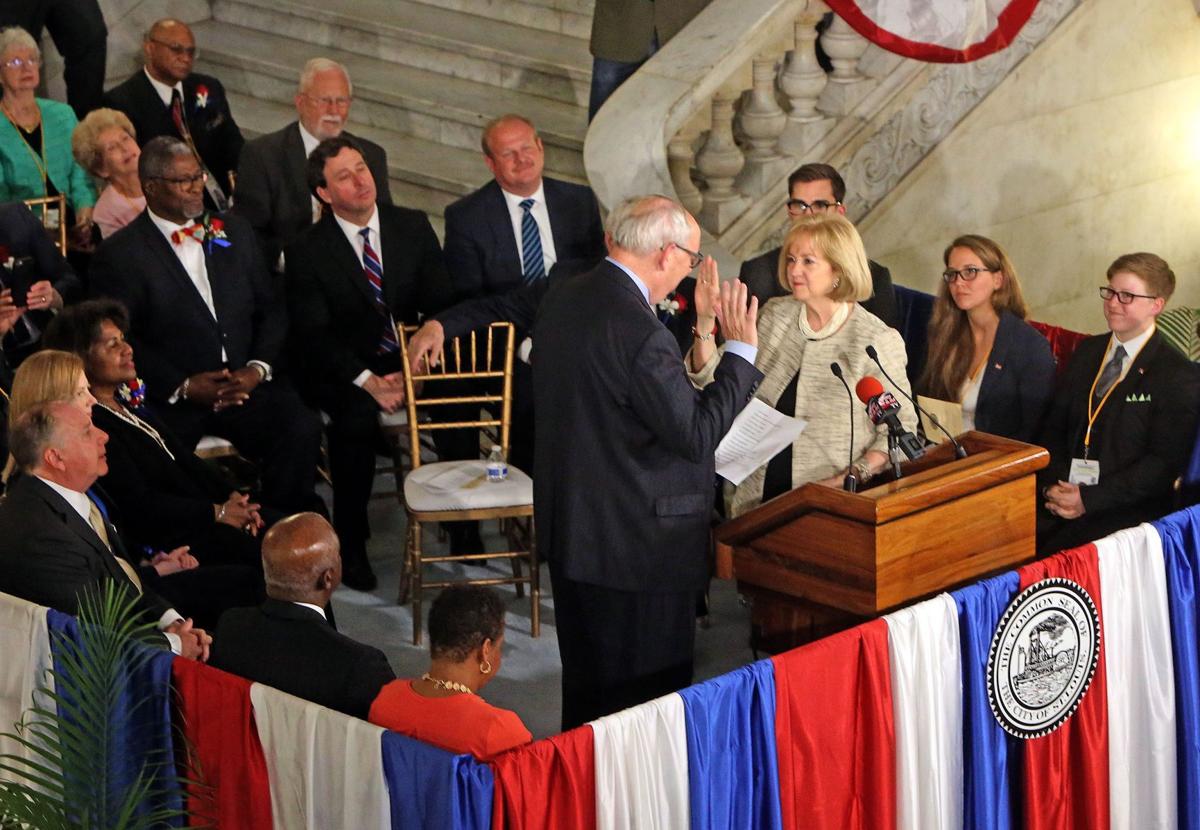 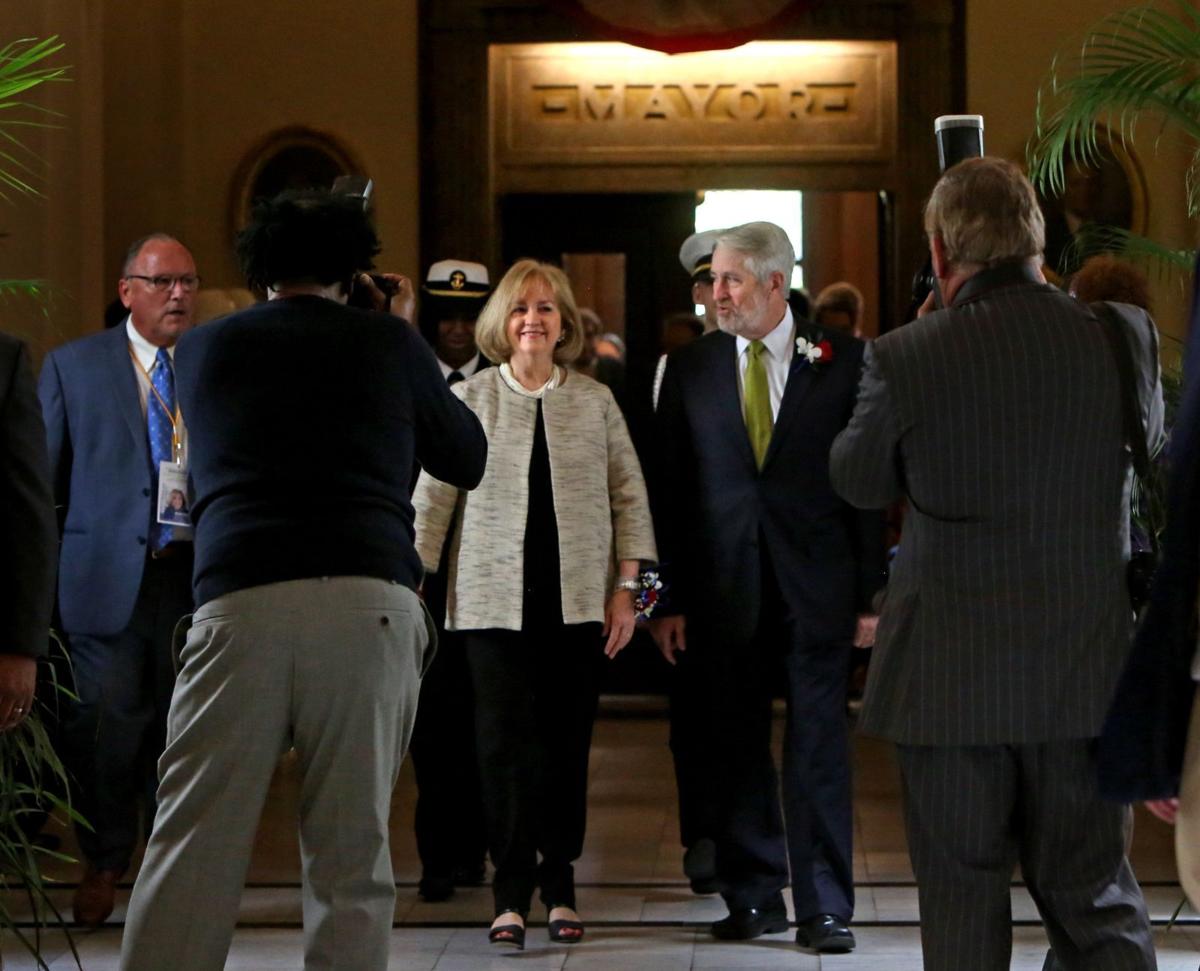 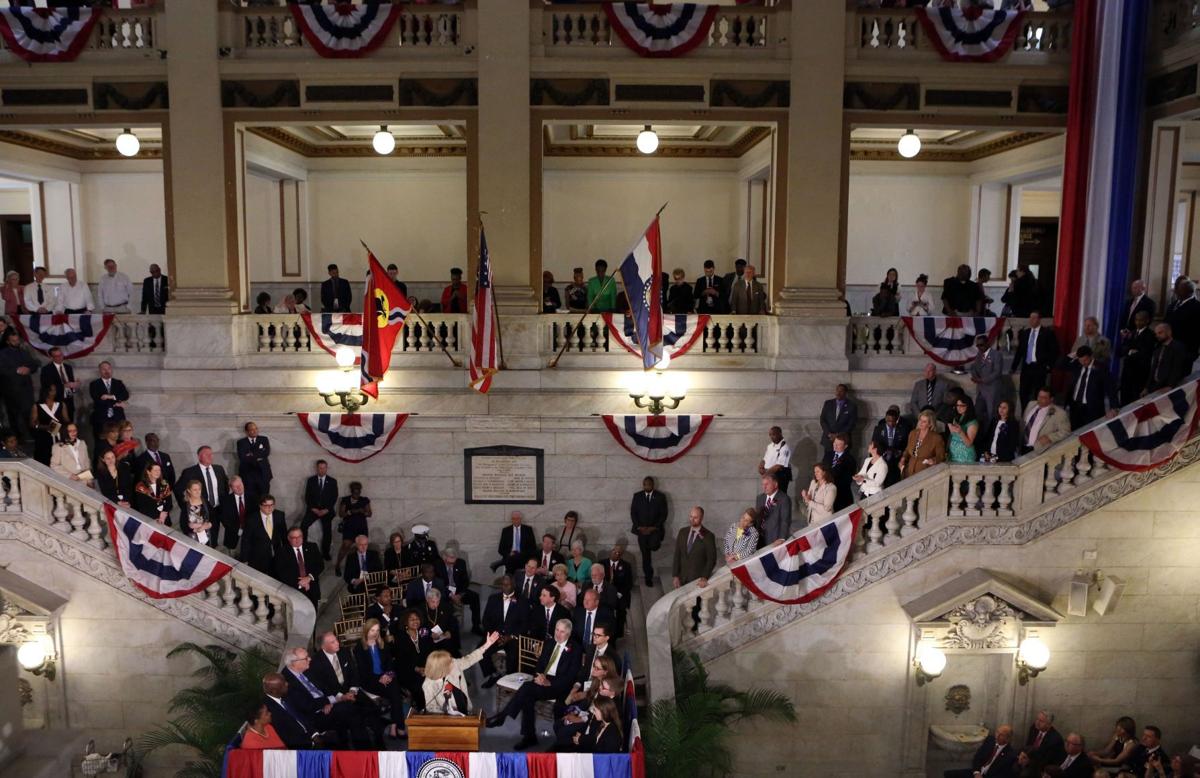 Mayor Lyda Krewson congratulates the new aldermen during her speech on Tuesday, April 18, 2017, in the rotunda of City Hall. Krewson became the city's 46th mayor - and its first female mayor. Photo by Laurie Skrivan, lskrivan@post-dispatch.com 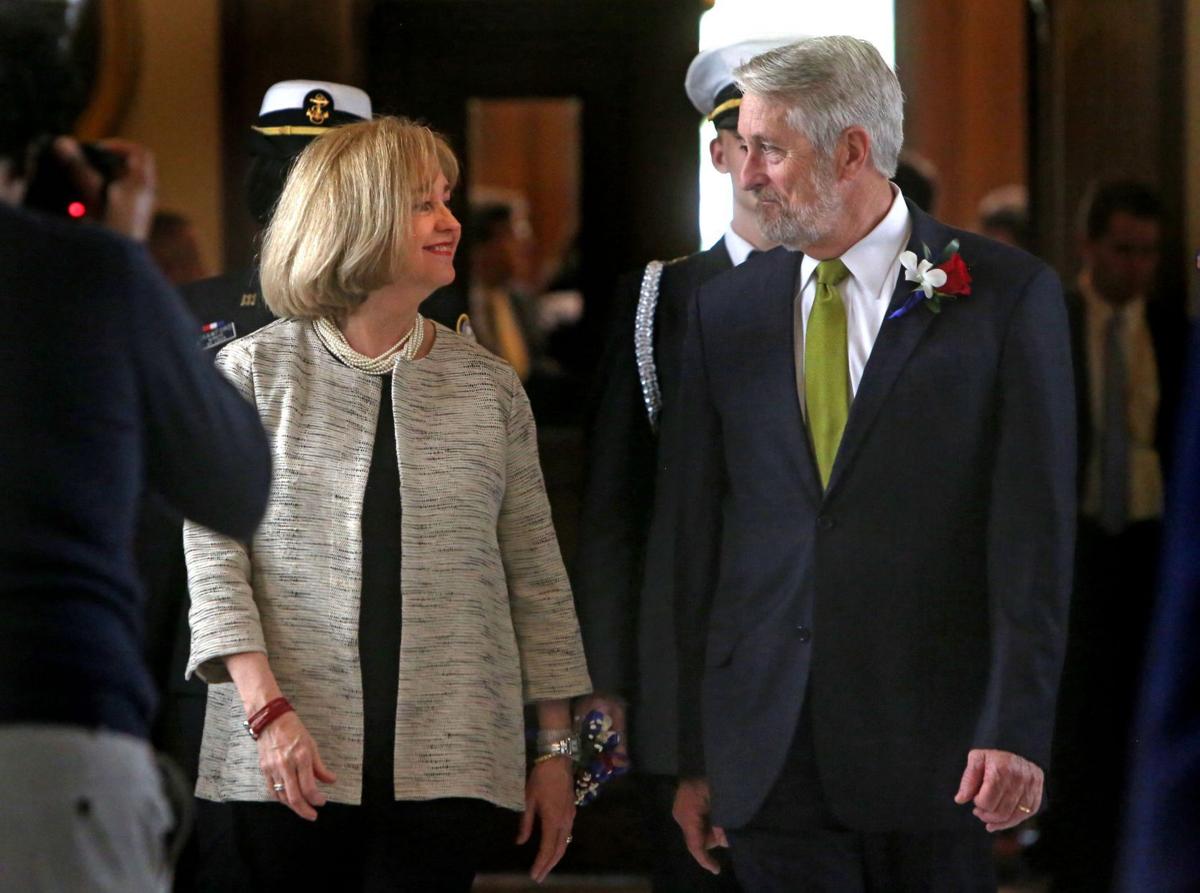 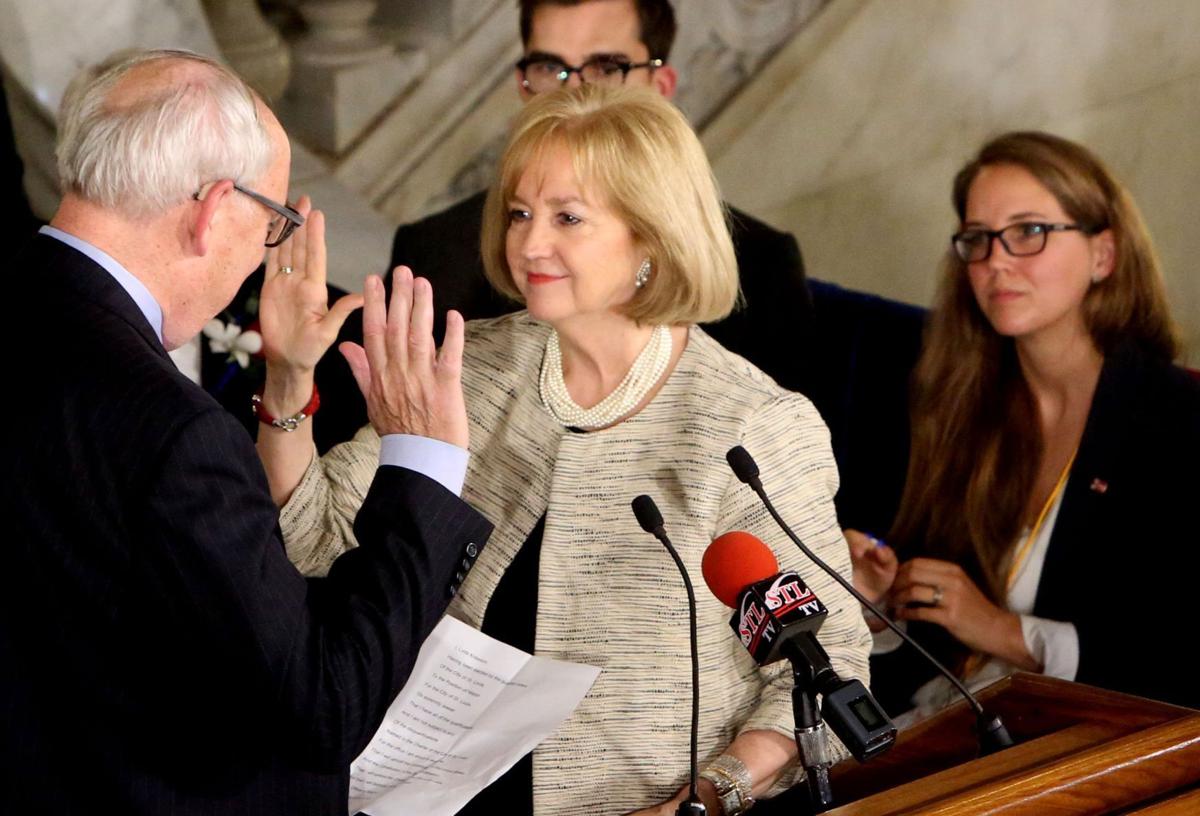 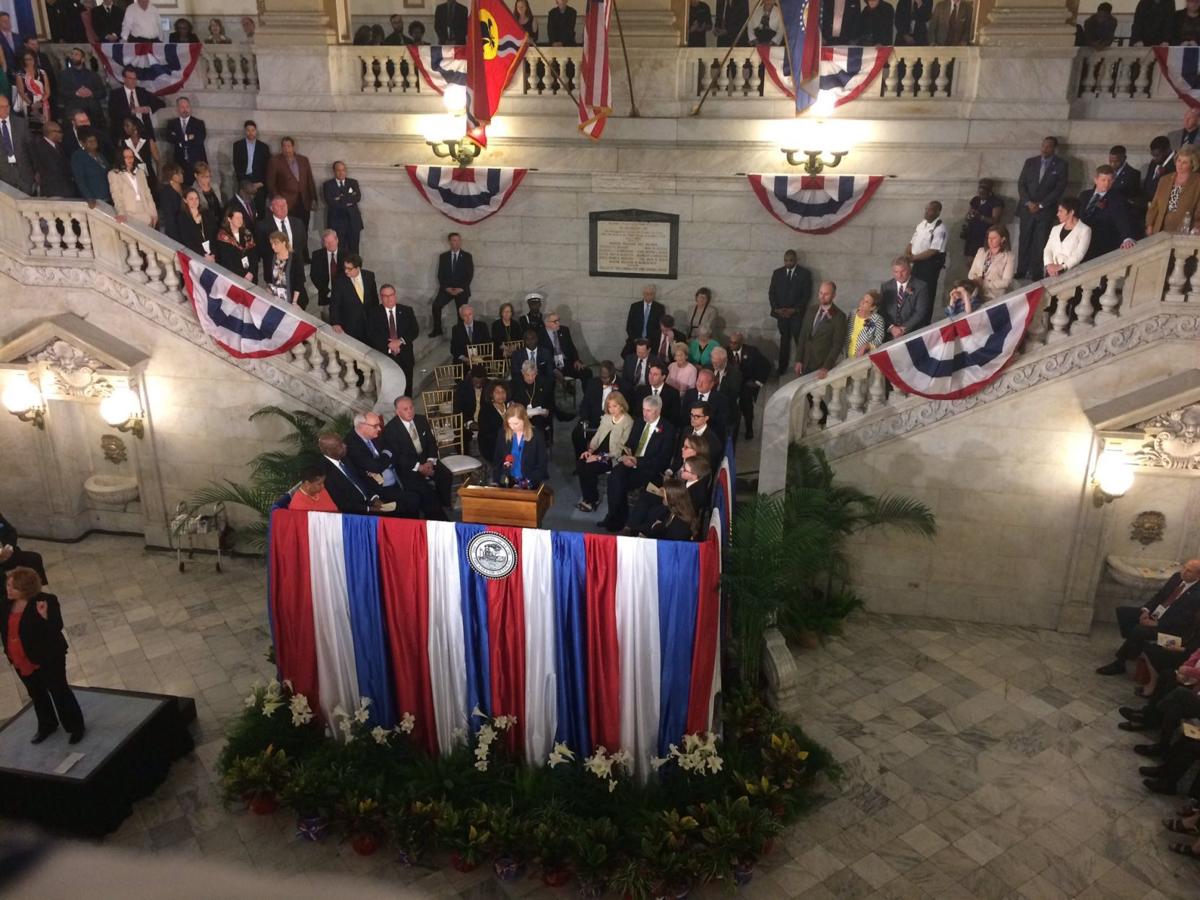 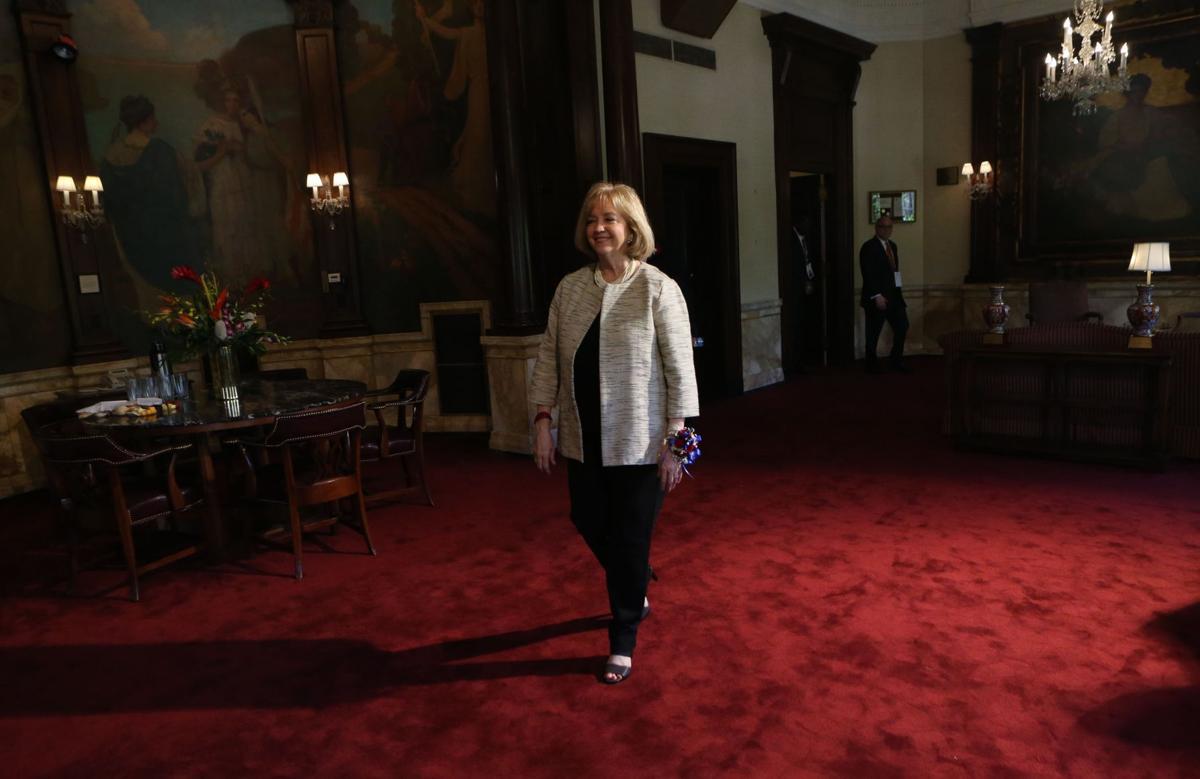 Mayor Lyda Krewson walks into her office for the first time as Mayor on Tuesday, April 18, 2017, in the rotunda of City Hall. Krewson became the city's 46th mayor - and its first female mayor. Photo by Laurie Skrivan, lskrivan@post-dispatch.com

Lyda Krewson on Tuesday became the 46th St. Louis mayor in the almost 200 years the office has existed — and the first woman in that office — with a call for continued urban revival and a warning that today’s federal government may not be there to help.

“Federal and state funding for programs that we depend on — for law enforcement, health services, housing and real estate redevelopment — are on the chopping block,” Krewson said. “If those funds disappear, progress won’t be easy.”

In a roughly 10-minute inauguration speech, Krewson rattled off city success stories of the past two decades, including the revival of Cherokee Street, the Grove, the Loop and Forest Park and the retention of the National Geospatial-Intelligence Agency’s headquarters in St. Louis.

“We have a lot to be proud of, St. Louis,” she said. But she added that “this success has not reached everyone,” noting the city’s 30 percent poverty rate.

In her speech — long on principles and goals but without specific new policy proposals — Krewson vowed to work with allies in the city to “find the will and the resources” for more summer jobs and recreation programs, to “rebuild the frayed relationships between law enforcement and our community,” and to continue building “safe, efficient and reliable public transportation.”

“We will focus renewed energy on delivering efficient and reliable city services to every neighborhood,” said Krewson — an apparent nod to complaints that the city has neglected outlying neighborhoods, especially in north St. Louis, while focusing redevelopment efforts on the central corridor.

“We will look at processes, track complaints and measure outcomes,” Krewson said. She also vowed to “tackle the vacant building problem.”

Krewson didn’t mention President Donald Trump by name in her speech, but she raised some of the same issues that have led urban advocates around the country to view his administration as hostile to the nation’s cities.

Among other issues, Trump’s proposed federal budget would include a $6 billion cut to the U.S. Department of Housing and Urban Development and the elimination of Community Development Block Grants, the four-decade-old local infrastructure program administered by HUD.

“I hope it doesn’t turn out to be as bad as what we read in the paper, but that will be very challenging for cities,” Krewson said in an interview in her office following the speech. “Everything falls to the city level. We need to make sure that our governments, both state and federal, know how important they are to the people.”

Among speakers was Kansas City Mayor Sly James, who called Krewson “the real deal” and said the two cities need to work together to address economic and social issues. He noted that St. Louis and Kansas City together comprise 15 percent of Missouri’s population but about 30 percent of its tax base, and urged residents of both cities to “shake off that horrible tendency to get comfortable with the status quo.”

Krewson, in her speech, also called for more cooperation and unity between St. Louis and the adjoining St. Louis County. But in the speech and afterward she didn’t specify whether she will seek an official unification of the two unaffiliated governments — as Slay sought for years — or something less formal.

St. Louis County Executive Steve Stenger was among inaugural guests, and Krewson confirmed in an interview that she, Stenger, Mayor James and others had dinner together in St. Louis Monday night. She said they didn’t discuss if or how a reunification should happen, but that she expects such talks in the future.

“In order for St. Louis to be competitive — and by ‘St. Louis’ I mean the region, the larger St. Louis — we do need to think regionally and act regionally,” Krewson said after her speech. As for what form that kind of reunification might take, she said, “That all has to be figured out.”

Mayor Lyda Krewson speaks after being sworn in as the 46th mayor of St. Louis City. Video by Beth O'Malley.

Mayor Lyda Krewson congratulates the new aldermen during her speech on Tuesday, April 18, 2017, in the rotunda of City Hall. Krewson became the city's 46th mayor - and its first female mayor. Photo by Laurie Skrivan, lskrivan@post-dispatch.com

Mayor Lyda Krewson walks into her office for the first time as Mayor on Tuesday, April 18, 2017, in the rotunda of City Hall. Krewson became the city's 46th mayor - and its first female mayor. Photo by Laurie Skrivan, lskrivan@post-dispatch.com