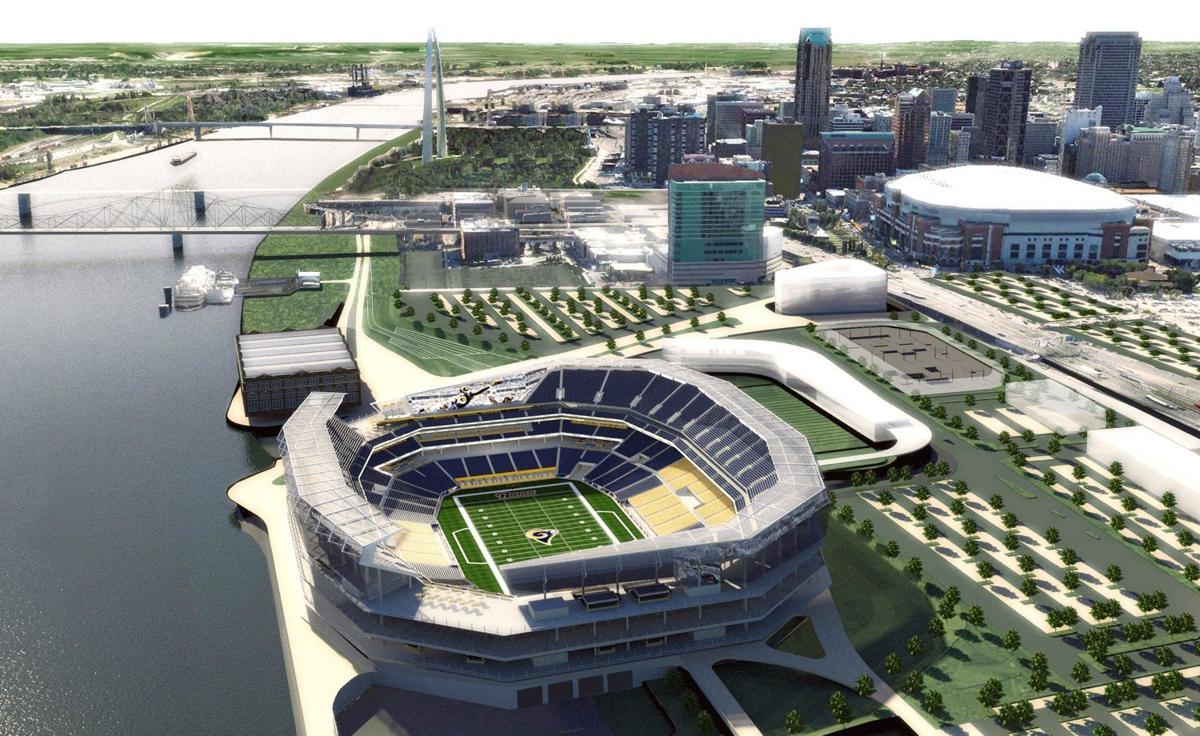 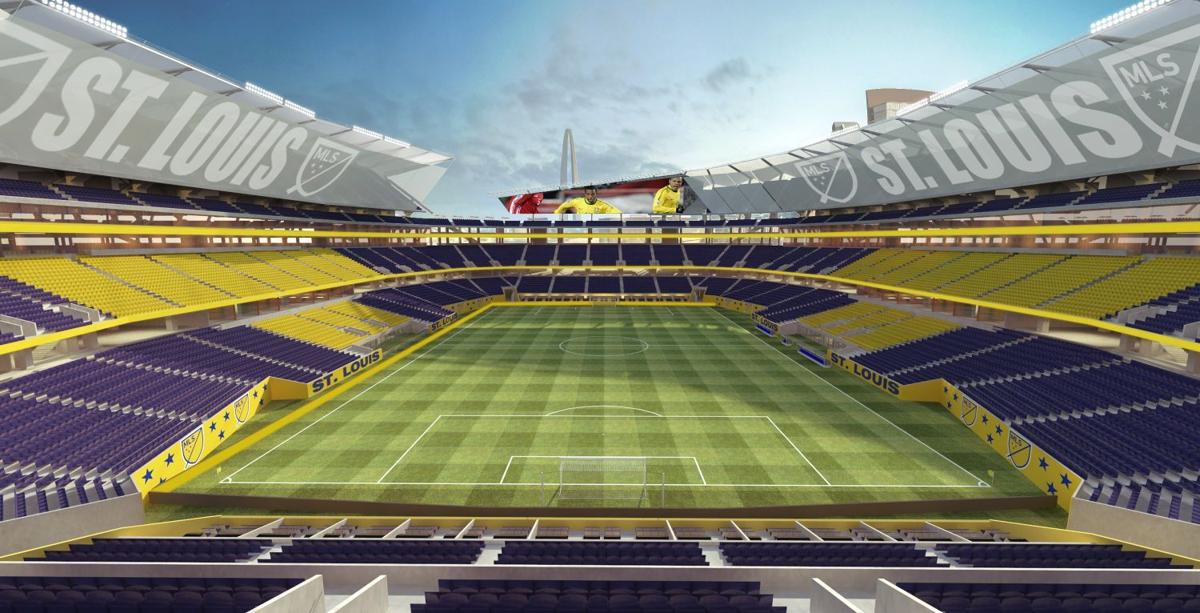 A proposed riverfront stadium is pictured configured for soccer in an image released on Tuesday, May 19, 2015. 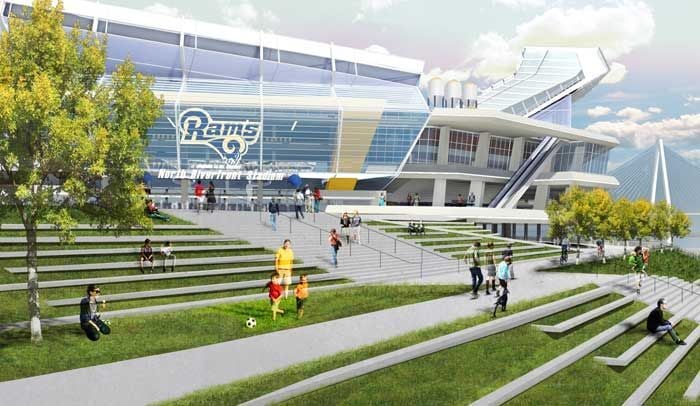 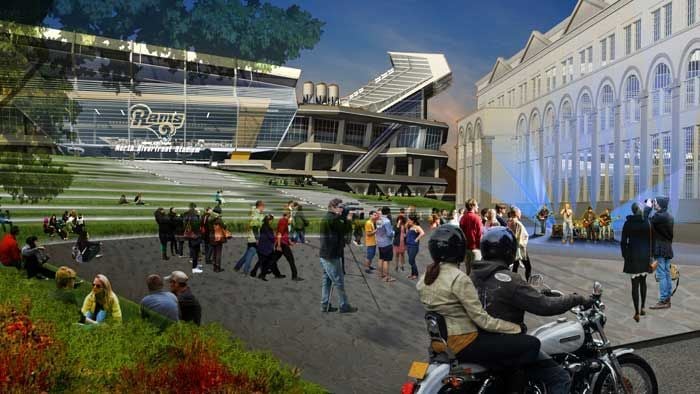 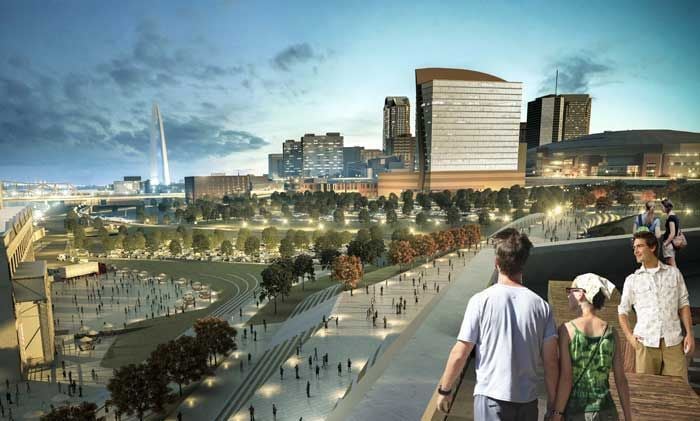 Still, the executive summary of the league-commissioned market survey estimated that a new riverfront stadium would draw about $200 million in the sale of personal seat licenses.

The original plan called for $120 million to $130 million from such sales.

The stadium has multiple hurdles remaining, from nailing down land control to securing state and local bond funding. But the market survey results represent a key victory in the effort to keep an NFL team in St. Louis.

“St. Louis can support an NFL club,” task force member and former Anheuser-Busch President Dave Peacock said Tuesday. “We’ve had a history of supporting a club, especially when that club is competitive.”

NFL officials declined to comment on the study results. A spokesman confirmed that the league is still “very engaged” with stadium planners here. League executives will visit St. Louis this month.

The task force is now in its seventh official month on the proposed $985 million open-air arena along the Mississippi River north of downtown. It has spent more than $5 million on attorneys, engineers, surveyors and architects, among others. It has presented the outline of a financing plan, numerous architectural drawings and a map with 70 percent of the land under site control or near it.

At the same time, St. Louis Rams owner Stan Kroenke has proposed a $2 billion stadium in Inglewood, Calif. NFL owners may decide at a special meeting this August if they’ll allow him to move, or choose a competing proposal, in Carson, Calif., by the San Diego Chargers and Oakland Raiders.

The task force faces plenty of opposition here. St. Louis County has dropped out of the financing. A St. Louis judge is considering whether city residents must vote before the city can help pay for a new stadium. And several legislators have sued Nixon and the public Edward Jones Dome authority, which is paying for stadium planning, alleging that the current effort is illegal.

Meanwhile, the market study results have largely run under the radar. The NFL hired consultant Conventions, Sports & Leisure International this year to find out just how much fans would pay for football in St. Louis, Los Angeles, San Diego and Oakland. Results came back in May; the NFL refused to publicly release them.

The four-page document generally shows fan support for the stadium, including a willingness to buy new PSLs — the one-time seat licenses required to purchase season tickets, at a cost from $500 to $40,000 each.

But it also brings up several concerns:

• St. Louis fans and corporations bought enough season tickets to move the Rams from Los Angeles — but “that level of support was not sustained once the team’s on-field success waned.”

• The Rams rank 22nd among the league’s 32 teams in average season ticket price, 28th in average club seat price and have the fourth-lowest average attendance over the past five years.

• The Rams were not rated as the most important team in St. Louis. Fans ranked the Cardinals first, Rams second.

• And survey respondents “exhibited low levels of intent to follow through with their purchase after the introduction of pricing.”

St. Louis is never going to be Dallas or San Francisco or Los Angeles, Peacock said in an interview with the Post-Dispatch on Tuesday. The riverfront stadium won’t be able to charge big-city prices.

But much of the rest, he said, comes down to the local appetite for a losing team.

The Cardinals are popular, he noted, in part because of nearly a dozen runs into the playoffs and multiple title fights over the past 15 years.

“That tells you,” he said, “performance is important.”

Proceeds would be used to help finance new NFL stadium, whose total cost is creeping upward.

Bernie: Stadium project is a test of ethics for NFL

St. Louis is doing everything the NFL wants, but there's still no guarantee the Rams will stay here.

Judge rules city ordinance is invalid, and that the location of the proposed stadium does not violate a law requiring it to be "adjacent" to the convention center.

A proposed riverfront stadium is pictured configured for soccer in an image released on Tuesday, May 19, 2015.