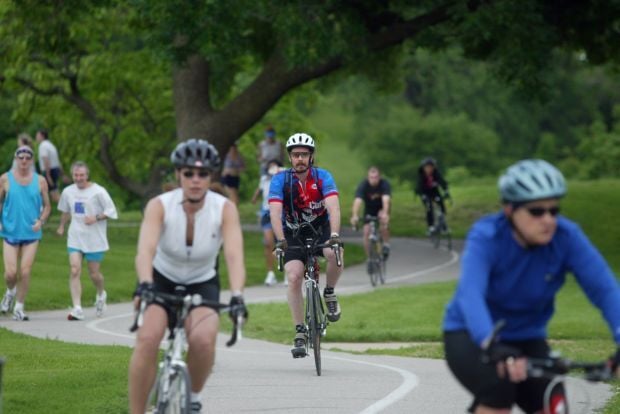 A group of riders use the Forest Park bike path in this 2003 file photo. 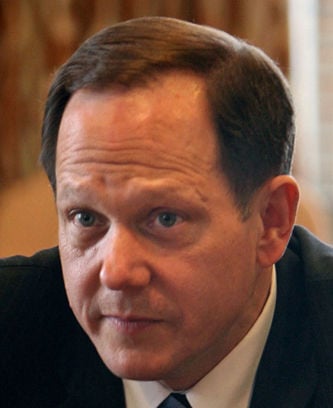 St. Louis Mayor Francis Slay meets with with the St. Louis Post-Dispatch Editorial Board at the Post-Dispatch on Tuesday, Feb. 19, 2013. Photo by Lynden Steele, lsteele@post-dispatch.com

The city’s list of $268 million in projects is a dramatic shift from most other places in the state, a wish list that focuses on pedestrians and less on building more highways and bridges.

“Only 25 percent of it goes to old-fashioned roads and bridges,” said Jeff Rainford, Slay’s chief of staff.

The goal is to make the city less car-centric — an effort that has lured younger, progressive residents to cities like Portland, Ore., San Francisco and New York.

Mayor Francis Slay, who supports the tax, said it would be the first time more pedestrian-friendly initiatives could be funded with transportation tax money. The state’s gasoline tax, for example, is limited to roads and bridges.

“Missouri transportation policy hasn’t changed until now,” Slay said. He asserted that the plan would make St. Louis a better place for people to live, work and play, without the need for a car.

Many of the proposed projects focus on bike paths, MetroLink access and a streetcar initiative that would link downtown to the Central West End.

Still, the city’s wish list does include money for roads and highways, including a $25 million project to construct a 22nd Street interchange that would help connect Paul McKee’s NorthSide regeneration project.

Gov. Jay Nixon recently set the Aug. 5 election as the date voters would consider a sales tax increase of three-quarters of a cent, sending county governments scrambling to produce project proposals that would potentially be funded by it.

If approved, the money would be available in 2015. The city estimates it would get about $250 million over 10 years. The state ultimately would decide which projects are approved for funding.

On Monday, the city outlined a series of projects, including big-ticket items such as:

• $14 million for improvements at the Delmar/Forest Park-DeBaliviere MetroLink station, including the installation of multi-use paths.

• $14 million for improvements that would make the area around Forest Park Parkway and Vandeventer more pedestrian-friendly.

Many believe the tax increase is a long shot.

“I don’t think it takes a political genius to realize this is a difficult one to win,” Rainford said.

Only Seattle would have higher base sales tax rate of major U.S. cities

Under-funding of rails, ports is another reason to oppose tax

Thanks to your editorial board for the nearly comprehensive list of reasons to vote no on Amendment 7, the three-quarters-cent sales tax for t…

I was glad to read the editorial “A tax to hate” (June 1) criticizing Amendment 7, which would increase the sales tax to fund the highways. As…

City residents looking for reasons to vote against the transportation sales tax have plenty, thanks to Mayor Francis Slay himself ("St. Louis …

ST. LOUIS  •  The city's Ways and Means committee is expected to consider ballot language on Wednesday for a possible $195 million bond issue …

Legislators, with help of Nixon, try to sneak one by the voters by putting sales tax measure on August ballot.

The governor says the measure would hit working families hard.

A group of riders use the Forest Park bike path in this 2003 file photo.

St. Louis Mayor Francis Slay meets with with the St. Louis Post-Dispatch Editorial Board at the Post-Dispatch on Tuesday, Feb. 19, 2013. Photo by Lynden Steele, lsteele@post-dispatch.com