JEFFERSON CITY — Does the next director of the Missouri Department of Health and Senior Services need to be a Christian?

That is the question after Gov. Mike Parson said in a statement Tuesday that he would only choose someone for the job who shared the “same Christian values” as the governor.

Parson, a Republican, was blasting conservative hard-liners in the Missouri Senate who had just jettisoned his pick for state health director, Donald Kauerauf, a pro-vaccine and -mask public health professional with 35 years of experience.

But in defending his pick, Parson’s statement, which his office also shared on social media, prompted a whole new round of criticism.

“I’m curious Governor, is this a standard you traditionally use?” state Rep. Adam Schwadron, a St. Charles Republican, asked on Twitter. “Article VI of the US Constitution strictly prohibits a religious test as a qualification to any office or public trust. Considering that, I then must ask the question. Would someone who is Jewish, such as myself, be considered for nomination?”

I’m curious Governor, is this a standard you traditionally use? Article VI of the US Constitution strictly prohibits a religious test as a qualification to any office or public trust. #moleg 1/2 https://t.co/TxNx5n3nda

In his statement, Parson said, “Don is a public health expert that is on record opposing masking requirements and COVID-19 vaccine mandates. He is outspokenly pro-life and morally opposed to abortion. Missourians know that I share these beliefs and would not have nominated someone who does not share the same Christian values.”

Brian Kaylor, the editor of Word&Way, a Jefferson City-based publication founded in 1896 and focused on the Baptist faith and other topics, said in an interview he found Parson’s statement “inappropriate but also not surprising.”

“It’s a little shocking just to see the governor make such an explicitly sectarian claim about who he would pick for this type of position,” said Kaylor, who is a board member of the St. Louis chapter of the Americans United for Separation of Church and State, according to his online biography.

Kaylor also referenced a news release Parson had sent earlier defending Kauerauf, saying he is “guided by our Missouri principles: Christian values, family values, and love for this nation.”

“He was already kind of framing this as a ‘you all should just vote for my guy because I’m a Christian, he’s a Christian, we’re all Christians,” Kaylor said.

“The only religious reference in the United States Constitution is that there be no religious test for office, Article VI,” Kaylor said. “This is a public office. So it is unconstitutional to suggest that someone should be a Christian to be the director of the state’s DHSS.

“This is a state where this director is going to be serving people of many faiths and no faith,” Kaylor said, “and so I think that’s very concerning that a governor would send a message that only Christians need to apply to this type of position, which not only impacts any applicants, or people who might be chosen, but also sends a message to the rest of the state that maybe you’re a second-class citizen.”

Chuck Hatfield, a Jefferson City attorney who has worked in state government, said Parson’s use of “Christian values” instead of plainly saying he would only hire a Christian could be the state’s saving grace if and when jilted job applicants start filing employment discrimination lawsuits because of the statement.

Religious discrimination in employment is illegal under both federal and state law.

“He pulled up just short of saying, I’m not going to hire someone ... who’s not a Christian,” Hatfield said. “But by saying I’m only going to hire people who share ‘my Christian values,’ as opposed to ‘my values,’ I think he does open the state up (to lawsuits) if there are folks out there who, you know, do not share the Christian religion who’ve not been hired for jobs.

“They’ve got a plausible claim that perhaps Missouri discriminates against folks who aren’t Christians,” Hatfield said.

Asked if saying he would hire someone with “Christian values” instead of saying he would only hire a Christian would save the state from legal liability, Kaylor said he wasn’t a lawyer but thought the message “was pretty clear.”

Kelli Jones, a spokeswoman for Parson, did not immediately respond to a request for comment on Thursday regarding the governor’s remarks.

The Madison, Wisconsin-based Freedom From Religion Foundation, which says it “works as an umbrella for those who are free from religion and are committed to the cherished principle of separation of state and church,” on Wednesday called on Parson to delete his tweet.

“The ban on religious tests in the United States Constitution is one of the truly great and original bulwarks for freedom of thought and expression,” Annie Laurie Gaylor and Dan Barker, co-presidents of the foundation, wrote in a letter to Parson dated Wednesday. “Our Constitution is godless, omitting any mention of god or Jesus — a unique contribution of our founders.”

The group also linked to a Pew Research Center article that said according to telephone surveys in 2018 and 2019, the number of American adults who said they were Christians had dropped 12% over the past decade, to 65%.

A March 2021 Pew survey found most U.S. adults support the separation between church and state but that many Americans supported more Christian influence within public institutions.

The survey found 19% of respondents wanted the federal government to “stop enforcing separation of church and state,” for example.

Kaylor said the episode is “the same type of Christian nationalism that we saw helping storm the Capitol on Jan. 6 (2021).

“It’s dangerous,” Kaylor said. “As a Christian myself, I speak up against (it) because it’s dangerous politically. I also think it’s a heresy of the Christian faith.”

Parson’s statement on the Kauerauf nomination

“It’s unfortunate that we now have to disrupt state operations and the leadership at an entire department because the Missouri Senate chose to indulge a few men’s egos.

“The events that have transpired over the past few days surrounding Don’s Senate confirmation hearing are nothing short of disgraceful, unquestionably wrong, and an embarrassment to this state and the people we serve.

“I’ve been a conservative Republican my entire life and contrary to what some Senators believe, tarnishing a man’s character by feeding misinformation, repeating lies, and disgracing 35 years of public health experience is not what it means to be conservative.

“Don is a public health expert that is on record opposing masking requirements and COVID-19 vaccine mandates. He is outspokenly pro-life and morally opposed to abortion. Missourians know that I share these beliefs and would not have nominated someone who does not share the same Christian values. Yet, Senators chose to believe baseless rumors and outright lies on social media rather than the facts in front of them.

“Throughout this process, more care was given to political gain than the harm caused to a man and his family. Don is a devoted public servant who did not deserve this, and Missourians deserve better. I pray that honor, integrity, and order can be returned to the Missouri Senate and that it comes sooner rather than later.”

‘I'm Muslim and I’m not Christian and he appointed me,’ former Sen. Jamilah Nasheed told the Post-Dispatch on Friday.

Gov. Mike Parson said Paula Nickelson could serve the remainder of his term without going through a contentious Senate confirmation process.

Planned Parenthood said Missouri officials' attempt to stop reimbursing the group for some medical procedures is unconstitutional and illegal. 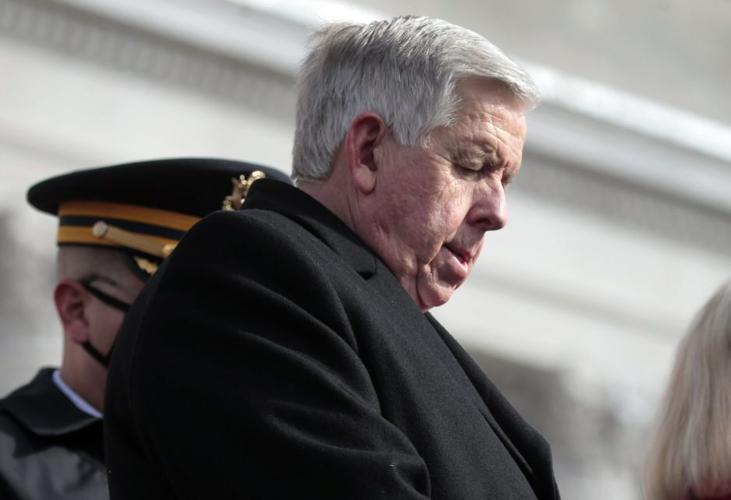 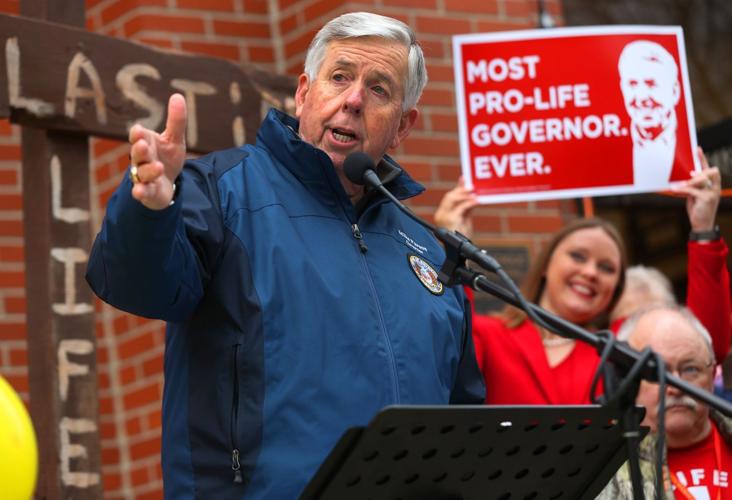 Missouri Gov. Mike Parson speaks at the 2020 Midwest March for Life on Saturday, Feb. 1, 2020, as state Rep. Sara Walsh, R-Ashland, listens in a crowd of about 500 at St. Peter Catholic Church in Jefferson City. Parson was the first Missouri governor to attend the march or speak at the rally. 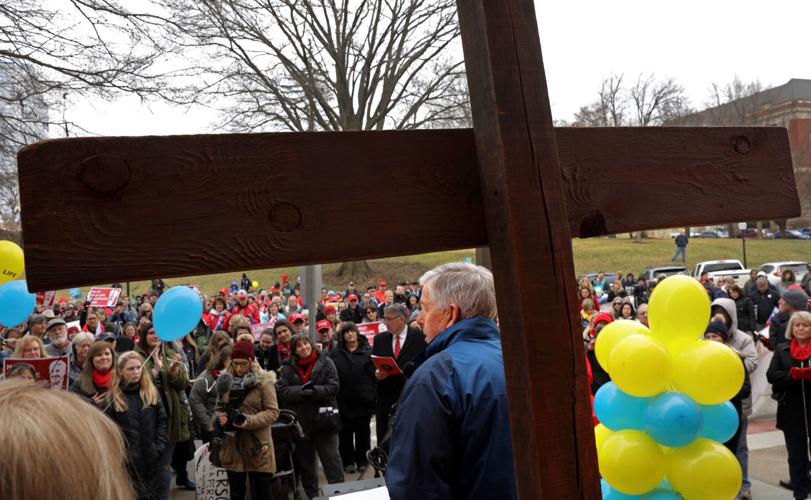 Missouri Gov. Mike Parson speaks at the 2020 Midwest March for Life on Saturday, Feb. 1, 2020, for a crowd of about 500 at St. Peter Catholic Church in Jefferson City. Parson was the first Missouri governor to attend the march or speak at the rally. Photo by Christian Gooden, cgooden@post-dispatch.com