CLAYTON — Hazel Erby, fired by County Executive Sam Page from her post as the county’s diversity director, filed a lawsuit Friday accusing St. Louis County of violating Missouri’s whistleblower statute because she was dismissed for publicly complaining about minority exclusion in county contracts.

Those contracts included those awarded earlier this year to build a $1.67 million emergency morgue in response to the pandemic, of which, less than $1,000 went to minority contractors, according to the St. Louis County Circuit Court lawsuit.

Erby, a longtime member of the St. Louis County Council and the first Black woman to serve on the legislative body, was fired on Aug. 18, enraging her supporters at a time of racial division and adding fuel to an ongoing power struggle between Page’s administration and its critics.

At the time, Erby publicly complained that Page didn’t value the work of Black women, but emails in days leading up to the firing revealed that Page never envisioned her role as being involved with the county’s inclusion efforts for minority businesses.

“Your role was not originally designed to take over the M/WBE (Minority and Women-owned Business Enterprises) program from the Procurement Division,” Page wrote in an email Aug. 17 to Erby, “nor was that what either of us wanted at the time.”

Erby’s lawsuit argues Page knowingly hired her in part to enforce a county ordinance requiring minority inclusion in contracts, a 2018 law that she helped craft while she served on the council.

“That was a county statute that Mrs. Erby championed when she was on the council, and that Sam Page hired her to enforce as part of his administration,” said Josh Pierson, Erby’s attorney.

“Once she was there and insisted on compliance, apparently the county didn’t like that,” Pierson said.

The suit doesn’t specify a timeline or detail the extent of communications between Erby’s office and Page’s administration, but says Erby confronted Page about minority-exclusion several times before he fired her.

Doug Moore, spokesman for Page, declined to respond to the suit, which was filed less than three weeks before the Nov. 3 election.

Erby, 74, represented the County Council’s 1st District from 2004 until joining Page’s administration last year when he hired her for the newly created office of Diversity, Equity and Inclusion, one of his first acts after the council selected him as county executive following the resignation of Steve Stenger in a federal pay-to-play case.

As the senior Democrat on the council, Erby’s lawsuit asserts she should have replaced Stenger based on precedent.

Page became executive after an emergency meeting and council vote on April 29, 2019. Erby opposed the “rushed” meeting and the council’s decision not to allow public comment, the suit says.

“During the emergency session, plaintiff asked Page why the Council was not allowing public comment,” the suit says. “Page did not answer plaintiff’s question.”

Erby initially didn’t want the job of diversity director, but accepted it to ensure compliance with the minority-inclusion ordinance, the suit claims.

“When plaintiff took the job, the County’s Office of Diversity, Equity, and Inclusion served two main roles: (1) receiving and trying to resolve complaints of discrimination from both County employees and residents; and (2) M/WBE compliance,” the suit says.

But the county violated the minority-inclusion ordinance throughout Erby’s tenure as diversity director, the suit claims, accepting bids from contractors who didn’t meet the requirements and allowing them to continue working on the project, failing to commission an updated disparity study required by the ordinance in 2019, and failing to adequately fund Erby’s new office.

At the time, county officials disputed Erby’s office was allowed see the bids and said they used preexisting contracts that lacked minority-inclusion requirements.

But the “typical process” required the county to inform Erby “and her office of new construction projects in order to ensure compliance with the M/WBE,” according to the suit. Instead, Erby learned about the project through media reports, the suit says.

“The County did not inform plaintiff or her office of the construction of the temporary morgue in a willful, and ultimately successful, attempt to ignore the M/WBE’s requirements,” the suit says.

“Upon learning of the project, and how the County side-stepped her office and the M/WBE, plaintiff confronted Page, disclosing violations of the M/WBE to him. Plaintiff spoke with Page and complained multiple times about the temporary morgue project and the ways the County violated the M/WBE.

“After the final conversation” between the two, Page told Erby that “she and her office would no longer be involved in the contracting process at all, including M/WBE enforcement.”

Erby asked Page how the county would enforce the M/WBE requirements.

“Page responded that he was not going to ‘deal with that,’” the suit says. “Page also told plaintiff that he did not want to keep supporting the M/WBE, that the legislation was ‘flawed’ and ‘no good.’”

The temporary morgue in Earth City, called the “Dignified Transfer Center,” ended up handling just 57 bodies before it was closed in August.

Erby’s suit seeks an unspecified amount in damages, alleging Erby lost wages and “suffered emotionally,” after the firing from the job, which paid her $121,000 per year. 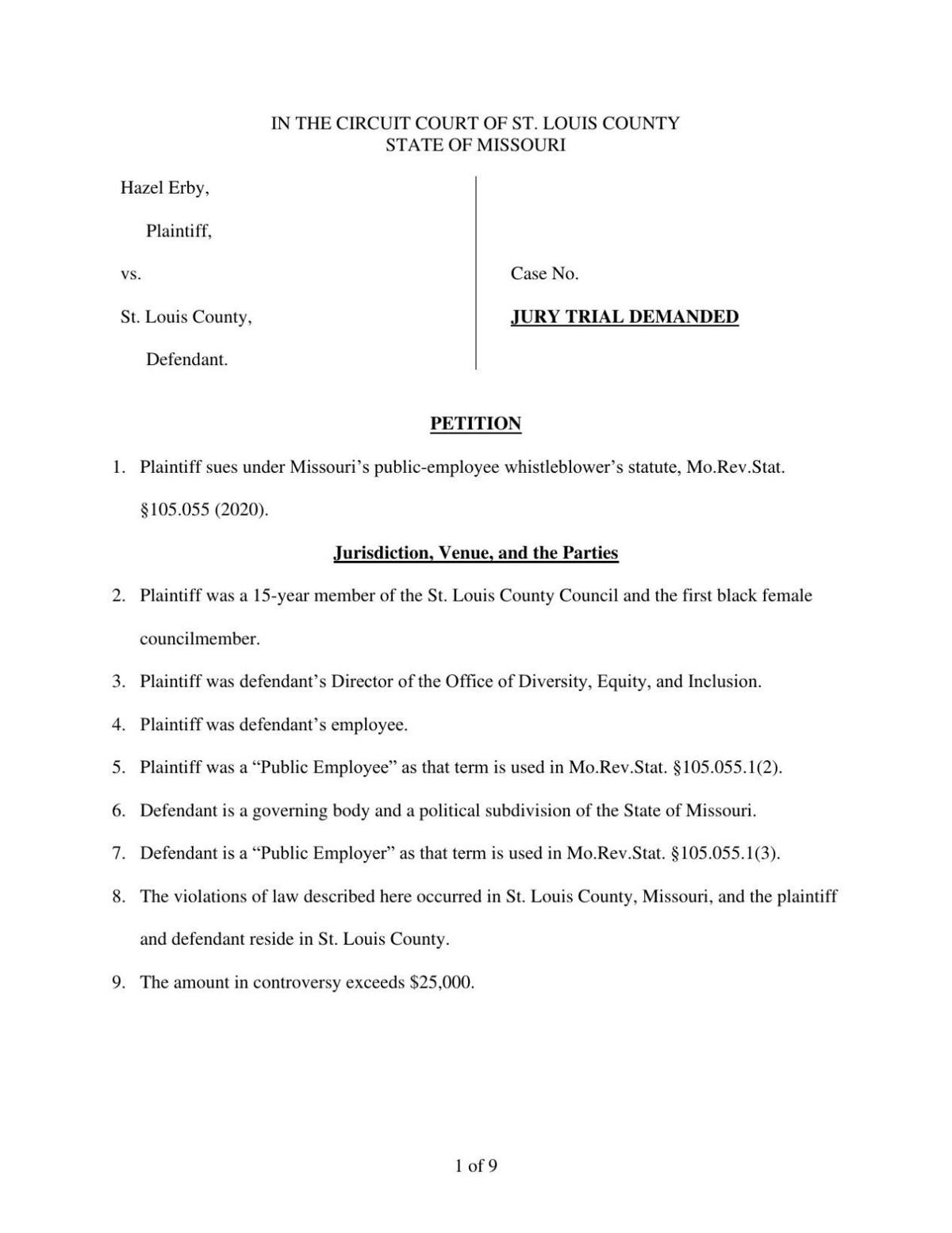 The state’s public employee whistleblower violation protects government employees from retaliation for disclosing information the employee reasonably believes to be evidence of a violation of law or policy or mismanagement or abuse of authority.

Erby’s lawsuit is the second by a high-ranking Black official once close to the Page administration before being ousted. Police Lt. Col. Troy Doyle, the only Black candidate to replace former Chief Jon Belmar, sued the county in July after he was passed over for the job, alleging he was a victim of racial discrimination.

“It’s unfortunate that a person of Mrs. Erby’s stature and accomplishments was discharged from her job,” Dobson said, “and it raises a question of whether or not there is a pattern of behavior occurring within the St. Louis County Government.”

Page revealed the action toward the end of Tuesday night's County Council meeting.