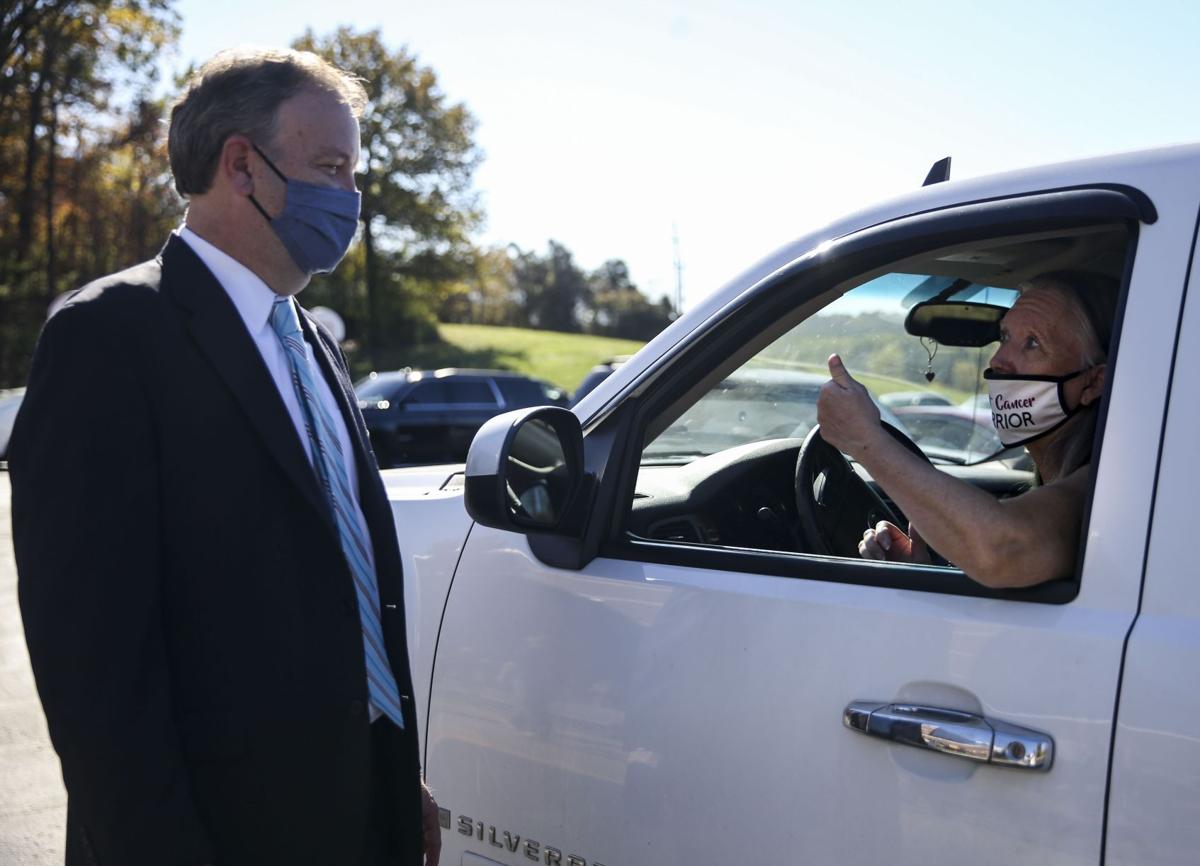 Sheri Elpers, right, gives County Executive Sam Page a thumbs up outside the Rogers Elementary School polling location in Oakville on Tuesday, Nov. 3, 2020. Elpers, a breast cancer survivor, says Page saved her life as her doctor two years ago while she was fighting the cancer. "I'm a Republican, but I voted for him," says Elpers adding that she thinks he is doing the best he can dealing with the Coronavirus pandemic. Photo by Colter Peterson, cpeterson@post-dispatch.com 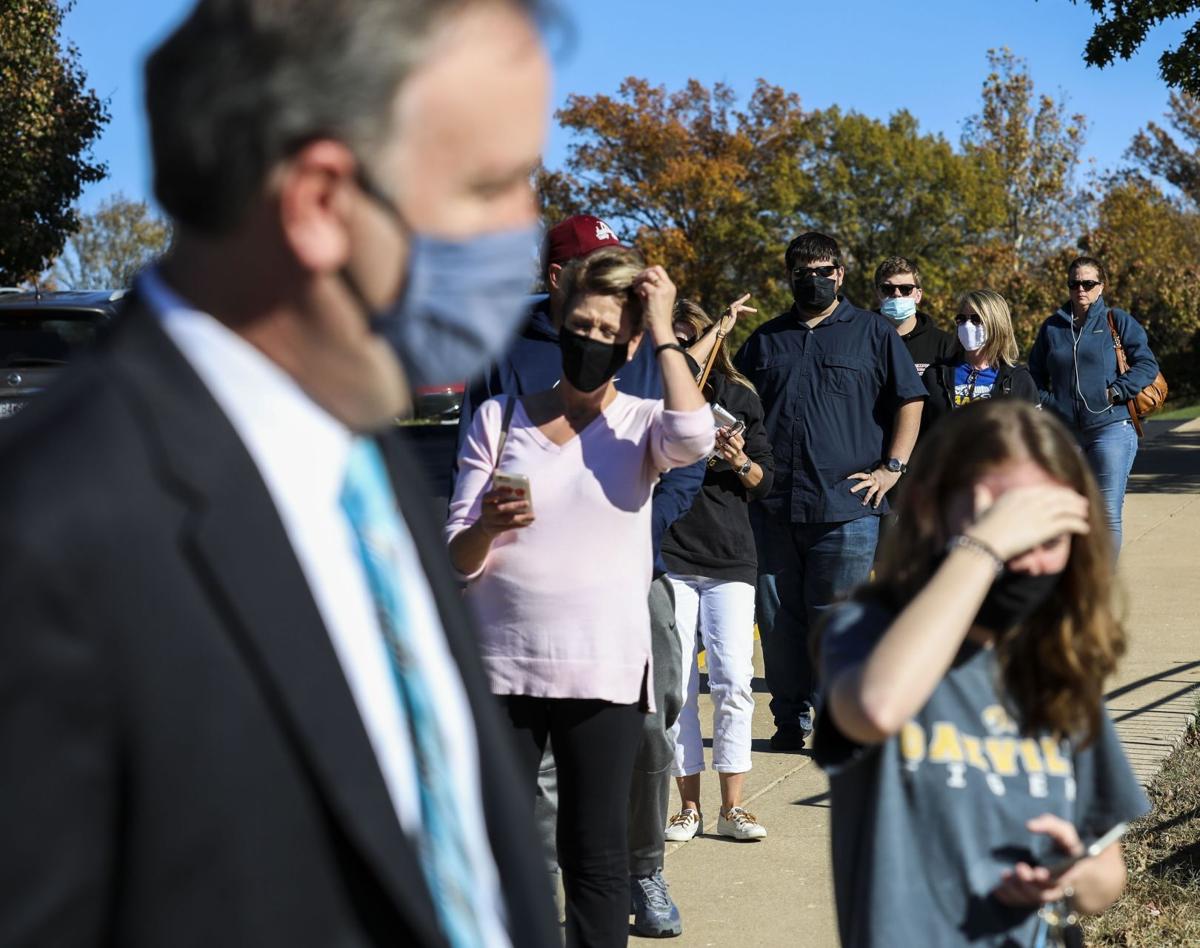 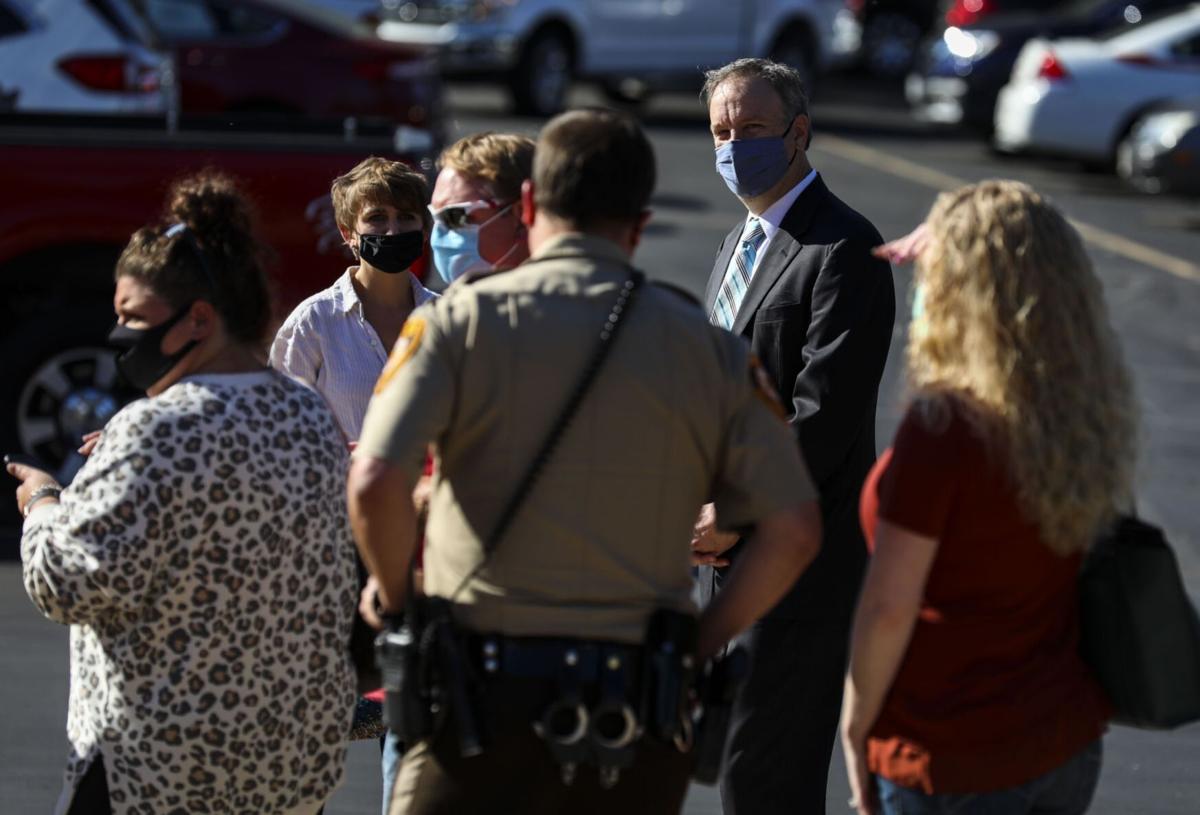 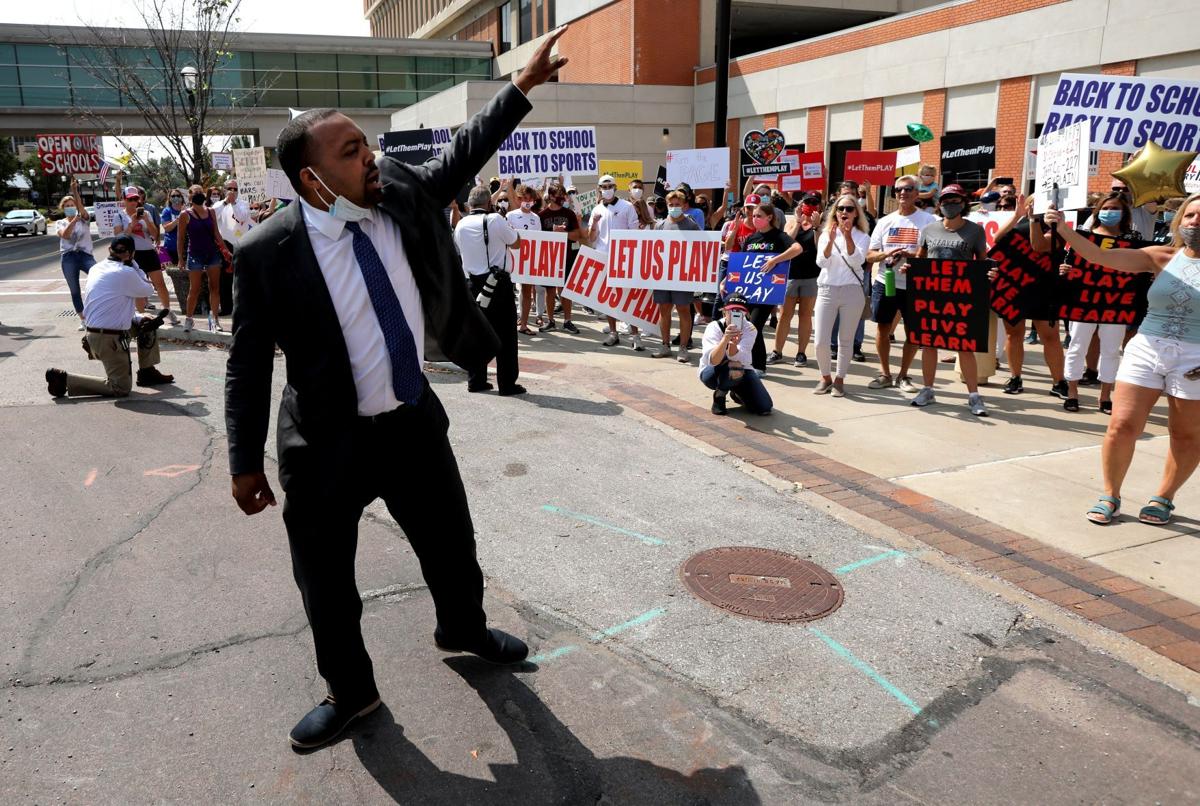 With all votes counted, Page won 58.2% of the vote. His nearest challenger, Republican Paul Berry III, had 36.5%.

St. Louis County experienced one of the highest turnouts it has ever seen in an election, with more than 78% of registered voters casting ballots.

Ernie Trakas, R-6th District, won with 53.1%, defeating his Democratic challenger, Bob Burns, by a six-point margin. Trakas had been down earlier in the night after absentee totals were posted, but he overtook Burns later on the strength of votes cast on Election Day.

Page overcame weeks of bitter opposition from County Council members who passed legislation that would have curbed the authority of his office and the health department during a pandemic.

Page vetoed both measures and the council did not have five votes to override him. Two council members also asked the county counselor to initiate an investigation into whether Page violated the county charter by working part time at his anesthesiology practice.

And, he faced vocal opposition on social media over his conservative approach to lifting coronavirus restrictions in the county.

In remarks on Facebook Live on Tuesday night, Page said, “We spend a lot of time talking about the differences between politics and policy. Although the lines have been blurred for some, they’ve been clearer to me. Saving lives is not a partisan decision, and we can’t let it be.”

“With the election behind us, it’s time to talk about what we have in common: a vision of a vibrant, successful, safe St. Louis County” Page said. “We may disagree on how we get there, but with that common goal, there should be more that unites us than divides us.”

Page became county executive on April 29, 2019, the same day that former County Executive Steve Stenger resigned and an indictment was unsealed in a federal pay-to-play case. The council voted 5-1 to select Page, who had been its chairman, to serve as county executive until the next general election.

The position will be up for election again in 2022.

Berry, a financially troubled entrepreneur, had tried to harness a wave of conservative anger over restrictions on youth sports. He capitalized by showing up at protests with campaign signs and sued Page on behalf of his teenage daughter, a senior at Pattonville High School who was barred from competing in cheerleading. Berry withdrew the suit when Page rolled back the restrictions in late September.

Virtually shunned by his party in his failed 2016 bid to unseat then-County Executive Steve Stenger, Berry managed to win nearly 40% of the vote then. Berry seemed to garner more support this time from members of his party, including Republican County Council members Tim Fitch and Mark Harder.

But with the number of coronavirus cases sharply rising locally, Page appeared to have wide support from a less-vocal majority of county residents who agreed with his more conservative approach toward opening up the county.

Paul Berry III says in a lawsuit that polling places were illegally consolidated and that the privacy of voters was violated.

Paul Berry III's lawsuit claimed polling places were illegally consolidated and that the privacy of voters was violated.

Sheri Elpers, right, gives County Executive Sam Page a thumbs up outside the Rogers Elementary School polling location in Oakville on Tuesday, Nov. 3, 2020. Elpers, a breast cancer survivor, says Page saved her life as her doctor two years ago while she was fighting the cancer. "I'm a Republican, but I voted for him," says Elpers adding that she thinks he is doing the best he can dealing with the Coronavirus pandemic. Photo by Colter Peterson, cpeterson@post-dispatch.com